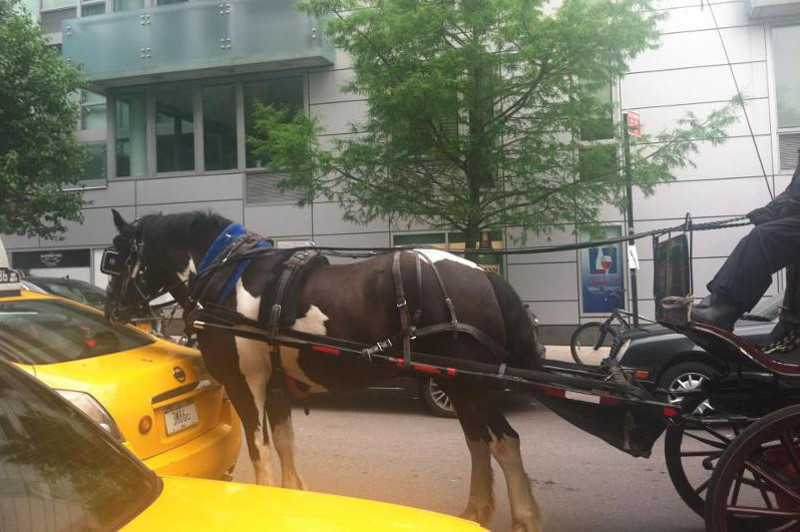 The NYC Mayoral election is almost here and voters seemed poised to choose Bill deBlasio over Joe Lhota in a landslide vote.   Although it seems pretty certain – with deBlasio polling almost 3 to 1 over Lhota – it’s never over until the fat lady sings.

What does this mean for the carriage horses of NYC?    Will they finally be freed from their life of slavery  – something for which we have fought so long and hard?

Mayoral debate & Teamster endorsement:  At last week’s televised debate, a question was asked about banning the carriage trade.  The question was directed to deBlasio because the right wing tabloid New York Post had recently published an article that said he was waffling after receiving the Teamster’s endorsement.  The Teamsters “represent” the drivers but it is not a real union shop – meaning that not everyone belongs; it is a mix of owners and drivers (which is not supposed to happen in unions); there are no benefits or collective bargaining.  The Teamsters collect dues and act as lobbyists.

DeBlasio said that this endorsement did not affect his position on the carriage trade and that he would ban it.  He did not give a timetable and went on to talk about replacement vintage electric cars.  Joe Lhota was also asked to comment and said he would replace the horse carriages with retrofitted battery operated carriages.

Watch a section of the debate below:

Logical thinking:  Animal activists have often been too willing to accept what is told them – such as believing that one day the phantom vintage electric cars would magically appear and replace the carriage horses  –  without logically challenging the process.  While I think deBlasio’s proposals about Pre K for every kid is laudable – I’d like to see a mandated course in logical/analytical  thinking for every NYC school kid.  Why?  — Because it would help to hone reasoning skills when confronted by pitches, propaganda, lies and advertising hype.  It would help in sorting through the drivel and make us more responsible members of society.

The truth about the vintage cars:  DeBlasio now says a ban needs to go through the City Council and that he would substitute “vintage electric cars” for the horse carriages.    But here’s the rub.  The cars do not exist.  After promising them for years, NY Class, the ones behind the cars, has never produced a prototype.  Besides, each car has been estimated to cost $200,000, totaling $13,600,000 to replace the 68 medallions or carriages.  These cars will clog up the streets of NYC like any other, and as automobiles, they will not be allowed in the park.  The money does not exist to produce the cars because it is a bad, risky investment and only fools would throw their money away on this.  A ban of the carriage trade must not be dependent on the success of an untried, risky, vanity business.

Horseless carriages – a much better solution:  Lhota said he would retrofit the carriages by adding motors to them.  No horses.  He is referencing the horseless carriages produced by Andres Carriage Tours in Michigan.  The drivers have said they do not want this either, but if it happened, it would cause the least disruption to the carriage trade and be a virtually seamless transition.  The existing business model could be kept – i.e., 68 medallions – the only difference would be that the carriages would be horseless.   This is a very practical and doable solution since the carriages already exist.  The cost is at most $20,000 for retrofitting, and the City could partially subsidize the carriages in exchange for the driver/owners allowing the ASPCA and NY Class to find homes for the horses.  Both organizations have claimed they have lists of people eager to take them, which I believe because many people have contacted us about a horse adoption.  They have also said they will take the horses from the owners, which is not possible since they are all privately owned.  This kind of inflammatory language, even if not intentional, feeds into the idea of “property seizure.”

Carriage drivers do not want to drive these cars:   To add another piece to this crazy Mad Hatter’s tea party, enter Ian McKeever, carriage driver and owner of 4 medallions and about 15 horses according to City records,  and a farm in Pennsylvania according to the NY Times.  McKeever wants to keep the status quo and expects the Teamsters to bully the next mayor into changing his mind.  Capital New York gave McKeever a voice in their recent article Horse Drivers’ Union Says They Won’t Drive deBlasio’s Electric Cars.

Teamsters Union.  They are big – 1.4 million members nation wide.  It is not known how many drivers belong to the horse-drawn carriage local – but it is definitely not 300 as the Capital article says.  There are fewer than 300 people who have a carriage license.  Some are part-time and some live in other states and countries and look at this as extra income.  There are only about 140-150 people who actually make a cash only living from the carriage trade.  Not all of them belong to the union.  So what is the number – is it 100?  125?  75?  They pay $60 a month to have the Teamsters lobby for them.  But the Teamsters could still represent the carriage trade  –  sans horses.

The Teamsters also have many members in City agencies and are counting on deBlasio to give them a raise after five years of working without a contract.  Is that more important to them or is sticking together for their “brothers” in the carriage trade?  Are animal activists more powerful than the Teamsters?  Will there be a showdown?  After all, the Teamsters did not have to endorse deBlasio – they could have sat it out.

As mentioned above, the electric cars continue to be a myth.  The writer of the Capital article refers to a prototype – but only a model, a picture of which they included in their article, exists.

Entitlements must go:  As for Ian McKeever, he is typical of those in the carriage trade.  He expects entitlements and special treatment from the city because that is what he has been used to from previous administrations.  Some years ago, the City found him city owned space for his stable –  Shamrock Stable on W. 45th St.  The City coughed up more than $500,000 to outfit this stable and then charged him $5,000 a month rent.  The City could have been taking in the market rate, which was about $60,000 a month according to the NY Times.

How many businesses do you know of that were forced out of a neighborhood because of gentrification and redevelopment? Probably a lot.  And how many were giving subsidies or alternate business deals by the City?    Answer – none of which I was aware.  Businesses closed down and jobs were lost.  So why should the carriage trade members continue to expect special treatment from the City?   No reason.  Every poll taken since 2006 shows between 75 and 80 percent of respondents want a ban of horse-drawn carriages in NYC.  The opponents of this trade represent New Yorkers and potential tourists from every state in the US and more than 50 countries.

In 2010, as reported in the NY Times, the City sold the Shamrock stable building to a private developer and Shamrock was forced to relocate.  This time, the City did not find them alternate space.  At the time, the ASPCA offered to help McKeever find homes for the horses but he refused and sent six to a farm – per a  June 7, 2010 NY Times article.  However, only one is still working in the NYC carriage trade.  What happened to the others?

It remains to be seen what will happen in January.  We will not only have a new administration but the ASPCA’s Humane Law Enforcement Division will no longer exist since they are giving it up as of December 31st.  Carriage drivers on the hack line have told us they are filing a law suit on January 1st.  Will they be successful or will the City win because of the serious safety issue posed by this business?   Will the carriage trade continue to hold NYC hostage?

Stay tuned.  One thing we can be sure of is the “horse manure hitting the fan.”  We are NOT going to wait for the electric cars that have not existed for 5 years – that would be like Waiting for Godot.  Besides – this is not Alice’s Wonderland.

We started the campaign to ban horse-drawn carriages in 2006 – almost 8 years ago.  No one said it would be easy.  After all, the abolition of human slavery took more than 30 years.