The Truth About Horse-Drawn Carriages in New York City 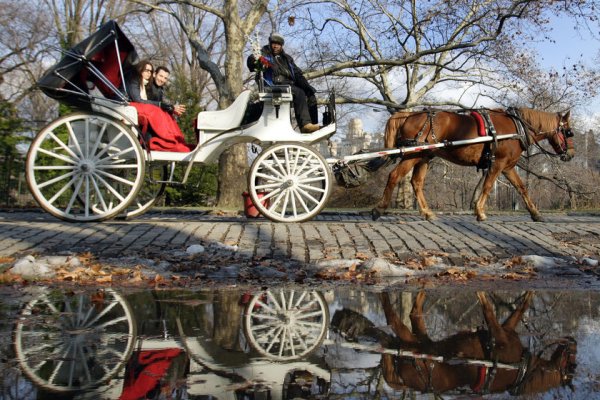 “Excuse me. We’re collecting signatures to support Intro. 86, which replaces horse drawn carriages in the park with electric energy efficient vintage cars. Better for the environment and no animal abuse. Are you interested in signing?” I muttered this phrase all afternoon as I volunteered for New Yorkers for Clean, Livable & Safe Streets (NYCLASS), an organization dedicated to increasing the quality of life for New Yorkers and our horses through “education, advocacy and legislation.”

There are over 200 horses in New York City working nine hour shifts, carrying carriages that weigh hundreds of pounds, breathing in exhaust, and getting spooked by the taxis and buses. New York has the highest horse-drawn carriage accident rate in the country, and many cities including Palm Beach, Biloxi, Key West, Las Vegas, Santa Fe, Paris, London, Beijing, and Toronto have already banned the antiquated practice. There are two pieces of legislation currently being considered in New York’s City Council: Intro. 92, which bans the carriages and Intro. 86, which bans the carriages, but also introduces alternative opportunities for the carriage drivers. This additional proposal is what makes Intro. 86 a viable legislative option.

It costs the city hundreds of thousands of dollars annually to monitor the horse-drawn carriage industry, and a 2007 audit by the city’s Comptroller revealed that the horses are not adequately cared for. They’re kept in rundown buildings, in tiny stables without enough room to comfortably lie down or move around. The buildings do not have adequate fire protection, some are not required to install sprinkler systems, and the horses are forced to use steep ramps to access different floors. Once a horse hits the streets of New York, his life expectancy is cut in half, he doesn’t receive proper veterinary care, he develops respiratory problems, works in extreme weather conditions, and does not have proper access to water. When the horses are no longer capable of carrying the carriages, most are sent to slaughter. NYCLASS has raised enough funds to safely retire the horses to sanctuaries.

Currently 50% of carriage drivers do not have driver’s licenses and each carriage is only required to carry $20,000 in insurance, compared to the $200,000 required of pedicabs. In the past 16 years, horse-drawn carriages have caused 26 accidents, injuring 31 people, and killing five horses. An additional four horses have collapsed and died on the streets, and countless more have been euthanized. Horses commute every day from their stables in midtown, through rush hour traffic to Central Park South. Anyone who’s ever driven through rush hour traffic in NY knows how stressful it is. Imagine a 1000 lb. animal who is easily scared by cars and buses. It is neither safe nor humane. Frommer’s Guide to New York City lists horse-drawn carriages in its “New York Experiences to Avoid” section.

The carriages slow down traffic, increasing exhaust and pollution around Central Park. The energy efficient vintage cars would be able to keep up with traffic, would follow government safety regulations and would be registered with the New York State Department of Motor Vehicles. Unlike the horse-drawn carriages, the “green” cars would use meters and be able to accept credit and debit card payments. This would ensure that tourists are not over charged, and would provide a revenue stream for the city. It is less expensive to maintain one of the cars than it is to stable a horse. The cars would allow drivers to give more rides in less time, carry more passengers at a time, and charge per individual. Replacing the carriages with the cars would lower the drivers’ overhead, increase their revenue, and allow the city to develop 150,000 square feet where the stables currently stand, which according to NYCLASS, “would result in estimated incremental city-tax revenues of nearly $2 million.”

New York City Council Member Melissa Mark-Viverito sponsored Intro. 86, stating that “The time has come to put an end to the use of horse-drawn carriages in New York City. The legislation I am sponsoring would provide a viable and exciting alternative to the horse carriage industry. The ‘green’ vintage cars being proposed in Intro. 86 will bring in greater revenue to our City and will make us a leader in eco-tourism.”

This is important legislation that would make a difference in the lives of hundreds of horses, make our streets safer, and improve our environment. Anyone can get involved. If you have a few hours a week or even just a few minutes, here is a list of ways that you can help.

What can you do to help the horses?