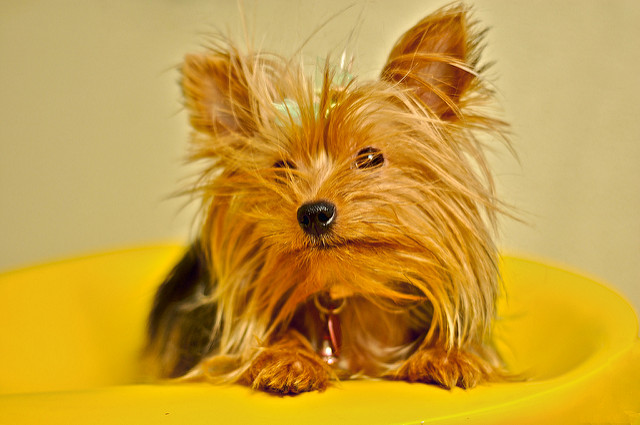 In the past 20 years, “designer dogs” have been a trend that’s on the rise. These kinds of dogs are cross-bred or manipulated by breeding practices to obtain a certain outcome. You may have heard of a maltipoo, puggle or labradoodle – all examples of cross breeding to “design” a certain type of look.

Teacup animals are another example of people breeding “designer” dogs. As the name implies, these animals are bred to be so small that some fit inside a teacup.

The teacup trend has gotten to the point where it’s become a competition to breed the smallest animal. Instead of sentient creatures, these animals have become novelties or a symbol of wealth and status. Paris Hilton is notorious for buying the tiniest dogs she can find. Two years ago, she spent $13,000 on a miniature Pomeranian whose size maxes out at two pounds. That’s not the only time Paris grabbed headlines for her increasingly small animals. Just a few weeks ago, she spent $8,000 on a teacup Chihuahua that weighs 12 ounces, while in 2015, she dropped $25,000 on two white Pomeranians with a combined weight of two pounds.

Loving animals is different from collecting them and using them as accessories. Paris frequently flaunts the accessories she buys for her tiny collection and brings the animals out on the red carpet to be shown off in expensive collars and dog clothing. The fact that celebrities are flaunting and influencing the teacup trend is dangerous. Public personas have influence over people and can easily encourage bad decisions and purchases. We see Paris’ Instagram filled with adorable animals, but these photos don’t tell the story behind the animals’ origins.

Nearly all teacup animals come from breeders, the majority of which are actually puppy mills. Since puppy mill dogs are often sold in pet stores, people never get to see where their precious pups are coming from and as a result, this cruel practice continues much to the ignorance of the buyer. By purchasing from a pet store, you are supporting puppy mills, and the people that run the mills do not view these animals as living creatures, they are viewed as a way to make money.

Purchasing animals from breeders and stores also keeps homeless animals in shelters. Many shelters have to put down perfectly healthy animals due to overcrowding. The more people who adopt an animal, the less animals are left without homes.

2. Teacup Dogs Are Much Different From Toy Dog

Toy breeds are recognized by the American Kennel Club, while teacup breeds are not recognized as an official breed. Toy dogs were bred mainly as companion animals to live inside a home with their human. Years of breeding has brought us the standard toy dogs we know today but there are no standards which define a dog as being a “teacup variety.”  To breed a teacup dog, the runts are taken from the litter and bred to create the tiniest possible outcome.  This can lead to serious physical problems for dogs

3. They Come With Tons of Health Problems

Breeding runts with runts has its complications. The smallest dogs of the litter are oftentimes the unhealthiest and need extra attention to grow strong. When litter runts are taken to be bred with other litter runts, those health problems are passed down. The size and lack of strength compromise their entire bodies, making them prone to diseases like hypoglycemia, respiratory and heart complications, deformities, seizures and more. According to The Yorkshire Terrier Club of America’s website,  teacup dogs “are extremely susceptible to both hereditary and non-hereditary health problems, including birth defects that may go undetected for a long time.”

How You Can Help Dogs

By going out and spending an exorbitant amount of money on teacup animals, more animals stay in shelters and are kept in terrible puppy mill conditions. Yes, these animals are cute (aren’t all animals!?), but if you truly love animals, you will think about their safety, happiness and living conditions. These dogs don’t deserve to be dangerously bred just to be a cute accessory.