10 Ideas for Creating Delicious Veggie Fillings for Your Homemade Burritos 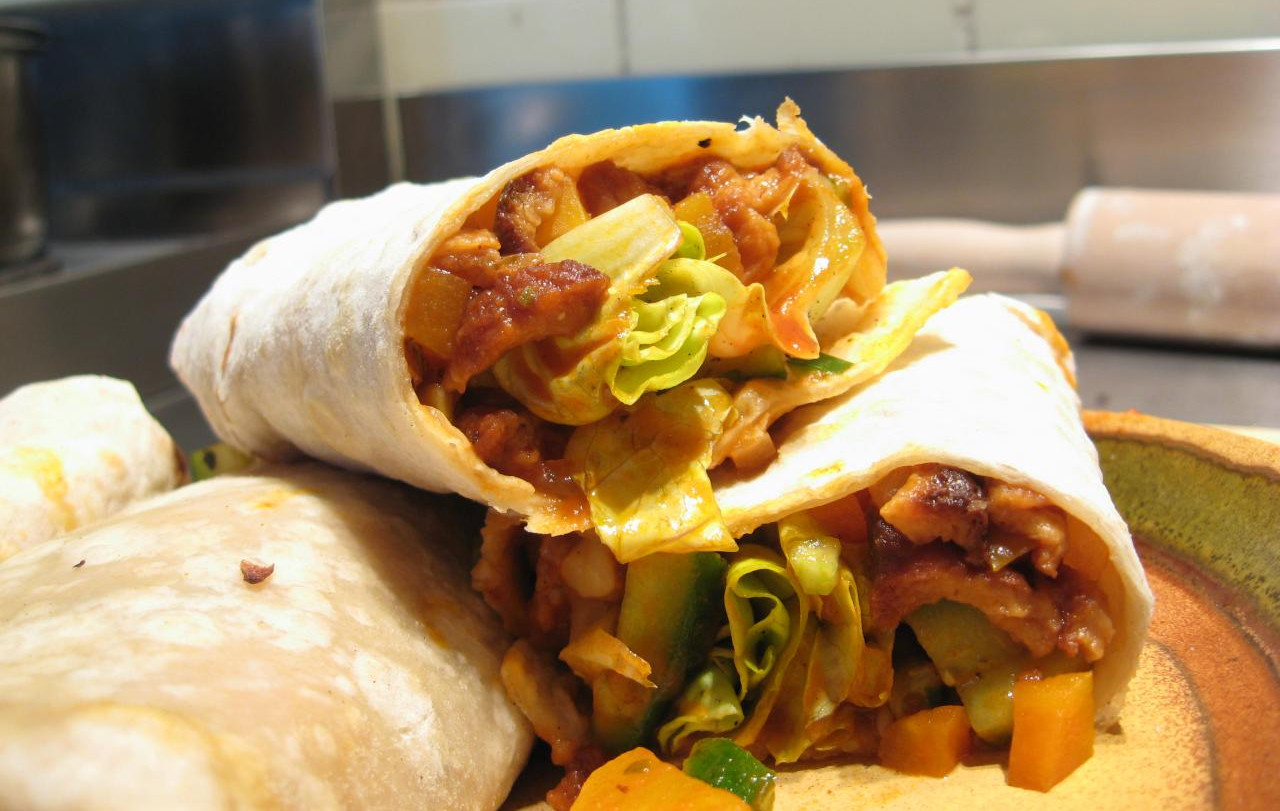 Traditional burritos usually contain meat and refried beans, but that doesn’t mean we can’t start new traditions. You can wrap any food you like into the tortilla, roll it up and call it a burrito. Well, unless you deep-fry it. Then it’s a chimichanga. Still, burritos are like blank canvases for your culinary imagination. Take a flour tortilla (they are more pliable than corn tortillas) and fill it to your heart’s content with veggie goodness. Go simple or go wild. It’s completely up to you. The only rule is that burritos are supposed to be hot; otherwise, it’s a wrap. So, I pondered the question, if I had to choose ten fillings for burritos I would most like to eat, what would they be? Here are the 10 ideas I came up with for filling my fantasy burritos. Some of them may be really “out there” but hey, they are my fantasy burritos. You can come up with your own.

I’m going to start with a burrito that I have actually made. It’s still a fantasy; it’s just one that came true. My Mexican Breakfast Burrito is filled with Mexican Tofu Scramble – tofu, black beans, green chiles, fresh cilantro and lots of spices. It also has brown rice with cilantro and lime, sauteed garlicky greens and creamy guacamole. In fact, I’m fantasizing about having one of these right now.

Before I became vegan, my favorite breakfast involved a mozzarella omelet with sausages and crispy home fries. I can recreate this in a vegan version and make it a burrito too. Imagine a tender tofu scramble with vegan mozzarella, vegan Spicy Italian sausages and crispy potatoes all wrapped up in a whole-wheat flour tortilla. Yum!

Philly cheesesteaks were one of my favorite sandwiches before I was vegan and continue to top my list now. Jackfruit is a fruit but it makes a perfect stand-in for meat. It takes on the flavor of whatever you do with it, keeping only its slightly sweet taste. I cook the jackfruit in lots of savory spices, add caramelized onions and make gravy with vegan Worcestershire sauce and balsamic vinegar. Layer the jackfruit on the tortilla with a spread of vegan mayo and vegan cheddar cheese for a decadent burrito. Check out my recipe for Jackfruit Philly Cheesesteaks.

If you know anything about me from my articles, you know I am obsessed with all things Buffalo-style. As I always say, I would eat my sneakers if they were covered in Buffalo sauce. I make lots of Buffalo dishes so why not make a Buffalo burrito? This fantasy burrito is inspired by a cross between my Buffalo Tofu Fries and this Grilled Buffalo Tofu Po’ Boy sandwich. I’m thinking strips of extra-firm tofu pan-fried and dipped in a Buffalo sauce made with vegan butter and hot sauce. Top it with a crunchy, refreshing slaw that includes shredded carrots and celery. Crumble some vegan blue cheese or ranch dressing over it and wrap it all up in a whole-wheat flour tortilla. Mmm…

Whenever I make tacos, I make them with strips of my Tempeh “Fish” Fillets. The tempeh is pan-fried in a chickpea batter that is flavored with Old Bay, lemon zest and kelp flakes. On top of the tempeh, a tangy slaw made from shredded red cabbage, thinly sliced red onion, chopped cilantro and lime. In lieu of tartar sauce, I make a dill remoulade by mixing vegan mayo, vegan sour cream, Dijon mustard, dill relish, scallions, dill, garlic and the zest and juice of a lemon or try this Lemon Dill Remoulade instead. Wrap this all up in a flour tortilla and you have a briny burrito to eat by the sea.

I love the taste of roasted veggies. Their flavors get so intense, their natural sugars develop and they taste rich and decadent. Cut onions, bell peppers, mushrooms and zucchini into similar size shapes. Toss them with a bit of olive oil and then season them with salt, pepper and for me, always garlic. Roast them in a 425 degree oven for about 15-20 minutes until they are tender and browned. Roll the roasted veggies in a tortilla with some vegan pepper jack cheese and a spoonful of quinoa. Add some fresh basil leaves for added flavor.

While I was thinking about my fantasy fillings, I asked my husband what his fantasy burrito would be. He agreed with the ones I had been writing down and then looked up and proclaimed, “I want a Tempeh Reuben Burrito.” Reubens are one of his favorite sandwiches; no reason why it can’t become a burrito. Thin squares of tempeh are marinated in an extremely flavorful mix and then grilled until browned and tender. For the burrito, they would need to be cut into chunks or sticks. Top the tempeh with some sauerkraut and Russian dressing. Don’t have Russian dressing? Combine 1/3 cup vegan mayo, 2 Tbs. ketchup, 1 Tbs. prepared horseradish, 1 tsp. vegan Worcestershire sauce, a dash of hot sauce and season with salt and pepper. Now you have Russian dressing.

This one may be a bit of a cheat but I’m going for it anyway. I make Moo Shu vegetables that I wrap in homemade 5-spice pancakes which are kind of like Chinese burritos. You can use any veggies you like but the base of Moo Shu is cabbage. I stir-fry shredded Savoy cabbage, thinly sliced mushrooms, thinly sliced red bell peppers, shredded carrots and thinly sliced carrots with garlic, ginger, brown rice vinegar, mirin, tamari and hoisin sauce. Unless you are making your own tortillas (in which case you could season them with 5-spice powder), I would add the 5-spice powder to the stir fry.

I think of this as a samosa meets blintz burrito. It has all the deliciousness of mashed potatoes flavored with Indian spices and a delicate tomato sauce. Just make some mashed potatoes as you usually would and set them aside. Heat some oil in a skillet and saute some mustard seeds, chopped green chiles, fresh grated ginger and chopped onions until they are softened. Add the potatoes to the skillet along some fresh diced tomatoes. Flavor the mix with Indian spices such as ground turmeric, garam masala, ground cumin and ground coriander. Fold in some chopped cashews for crunch and fresh chopped cilantro. Sprinkle with salt and lime juice. Wrap it all in a tortilla and serve with a dipping sauce of non-dairy yogurt mixed with tomato paste and Indian spices. Or use the recipe from these Potato Samosas with Coconut-Mint Chutney.

This is actually an enchilada recipe that I make but there is no reason it can’t be a burrito as well. The filling starts with sauteed onions, Serrano chile, garlic and grated zucchini. Then I add in black beans, cumin, chile powder, salt and pepper. Finally, mashed butternut squash is folded into the mixture. The butternut squash is so creamy, you won’t feel a need to add any cheese. Fresh diced tomato and cilantro perfectly balance the richness of the filling. You could also add some rice into the burrito, if desired. Usually, I serve this with a side salad of avocado, arugula and mango topped with a cilantro citrus dressing.

Ok, these are my 10 choices for filling homemade burritos. When you make your own burritos, the possibilities are endless. What would your fantasy burrito filling be? Tell us in the comments section.