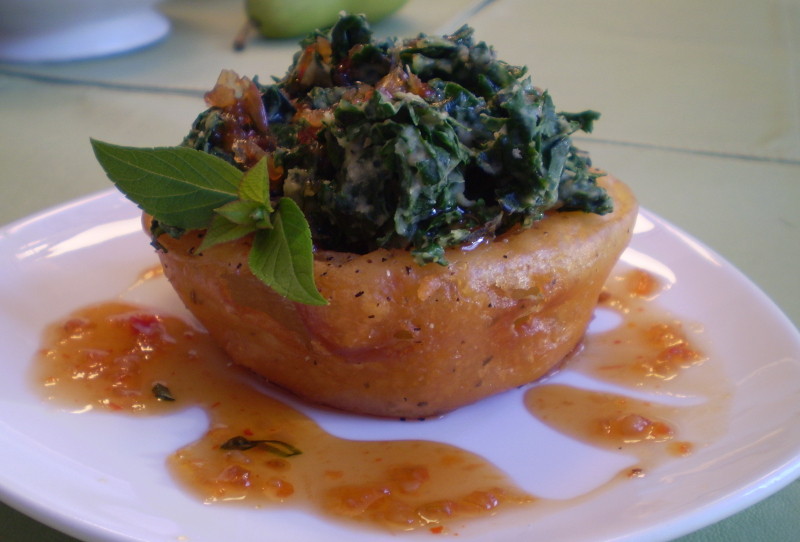 Okay, I know I have some explaining to do…Ruth’s Chris Steak House? Well, you see, after we went to the movies one night this past December, my husband Joe and I headed over to a wine bar we like, only to find it was closed for a private holiday party. Not wanting to drive anywhere else, we considered our options and chose nearby Ruth’s Chris, opting to dine in their attractive bar with its dark, gleamy and very appealing "men’s club” aesthetic. Unfortunately, my husband isn’t a vegan–or even a vegetarian–so ordering was no problem for him. However, for me, I think there were only two choices on the menu: tempura-battered onion rings and asparagus. But since seasonal cooking and eating is my thing, I just couldn’t do asparagus in December. Fortunately, I’d had a healthy snack before the movie, so we chose to split the onion rings which the bartender confirmed were vegan (a soda water and flour batter) after checking with the kitchen. I have never seen such colossal rings in my life. A mere five came in an order, but I could only eat two and Joe one. Because they were so substantial, I couldn’t bear not to bring the last two home. But I wasn’t in the mood for a couple of honkin’ onion rings the next day, so I decided to do a “Restaurant Redux” inspired by my husband’s side dish of creamed spinach which I remember loving at Ruth’s Chris during my vegetarian days in Nashville. The rings are so tall that they make almost a cup form. And the farmer’s market had gorgeous heads of kale that they had just cut, so I decided to fill the onion ring cups with “Creamed” Kale instead of spinach. With half a can of leftover white beans in the fridge, I decided to make the “cream” out of the beans, nutritional yeast, and unsweetened soy milk. The result put less emphasis on the cream and more on the greens, but was still silky, luscious and reminiscent of the Ruth’s Chris specialty. I simply heated the onion ring cups, filled them with the “Creamed” Kale, and served them surrounded by Ruth’s Chris’s special sauce which has a tangy sweet-hot Asian flare. Even if you don’t happen to have onion rings-on-steroids on-hand, the filling is delicious on its own. With this recipe, you can enjoy a little taste of Ruth’s Chris without all the death and dying.