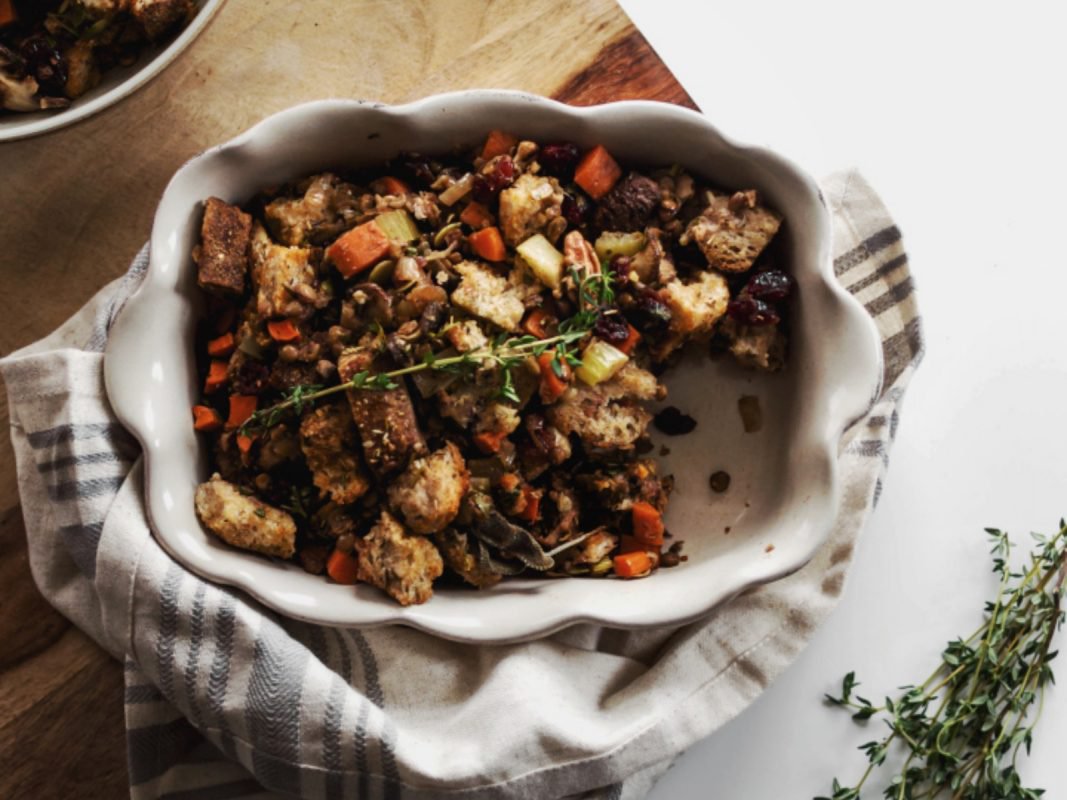 Stuffing your Thanksgiving entree is a dicey tradition anyway you slice it. As much as some people claim humans were built to be carnivores, we have a long history of not wanting to eat a whole lot of the animals we decided to turn into our food. Stuffing comes from a long history of people cramming carbs into their meal to replace internal organs of an animal.

Although King Henry the VIII had a particular fondness for stuffing, there’s not much evidence the pilgrims had any stuffing at the first Thanksgiving. Of course, if you’re having a vegan Thanksgiving, you are probably comfortable reinventing traditions for the better.

Here’s a selection of five tasty stuffings, courtesy of the Food Monster App! 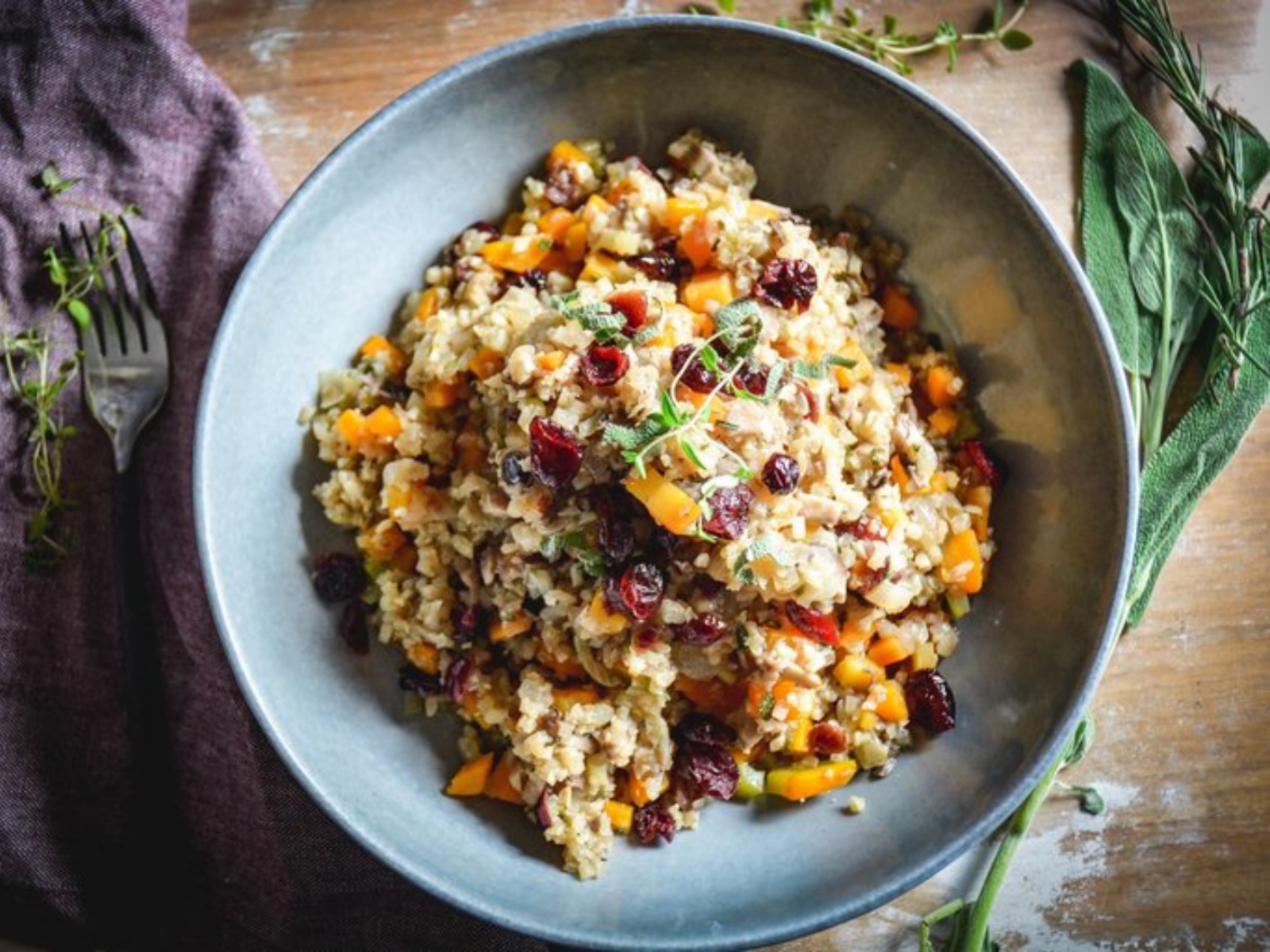 Daniela Modesto‘s Cauliflower Cranberry Sage Stuffing isn’t much too much to stress over. It’s cutting up a bunch of veggies and herbs and tossing them with cauliflower. If you’re following a paleo way of eating or are gluten-free, this is going to be a nice alternative for your Thanksgiving table. The vegetables work exceptionally well with the sweetness of the cranberries and the earthy taste of sage. It will not disappoint. 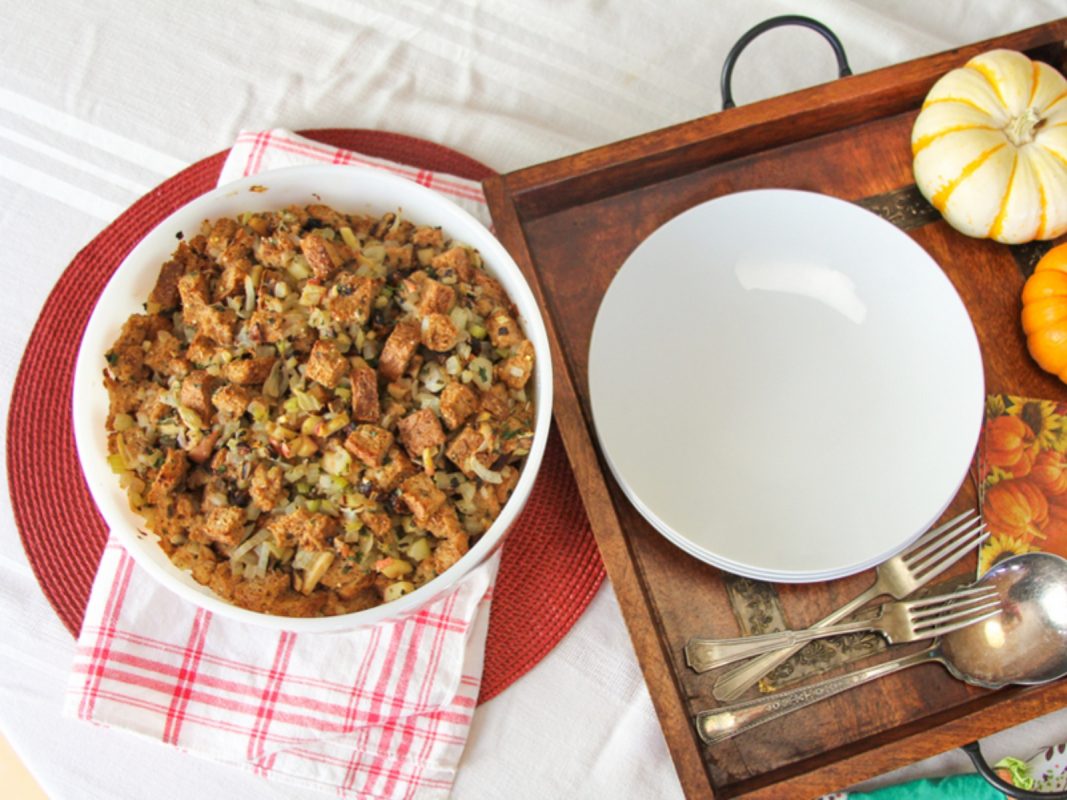 Fennel, Fig and Apple Stuffing by Molly Patrick is delicious! It is filled with such hearty and amazing flavors! And it is oil-free! Make sure you give it a go this holiday season! 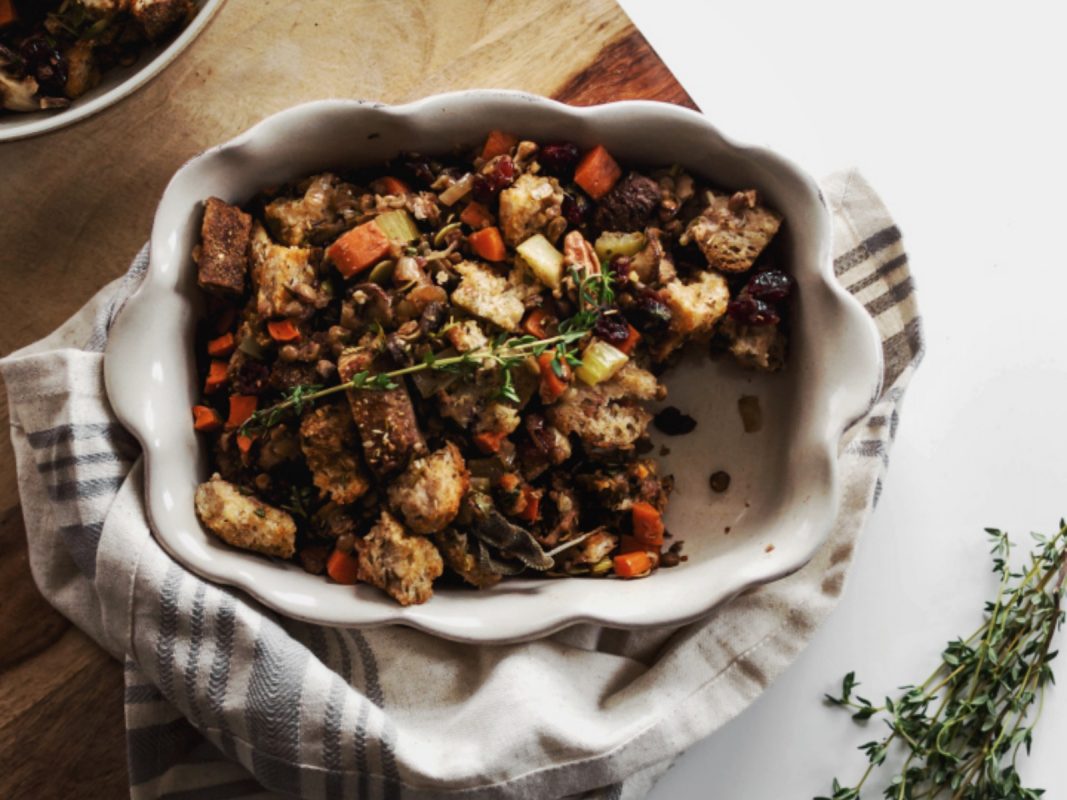 Herbs aside, Logan Dunn & Lexus Osman‘s Sage Rosemary and Thyme Stuffing is packed with sweet dried cranberries, the classic carrot & celery smash combo, roasted pecans, pepitas, and a full cup of green lentils for those holiday gains you know? This baked classic is anything but boring. 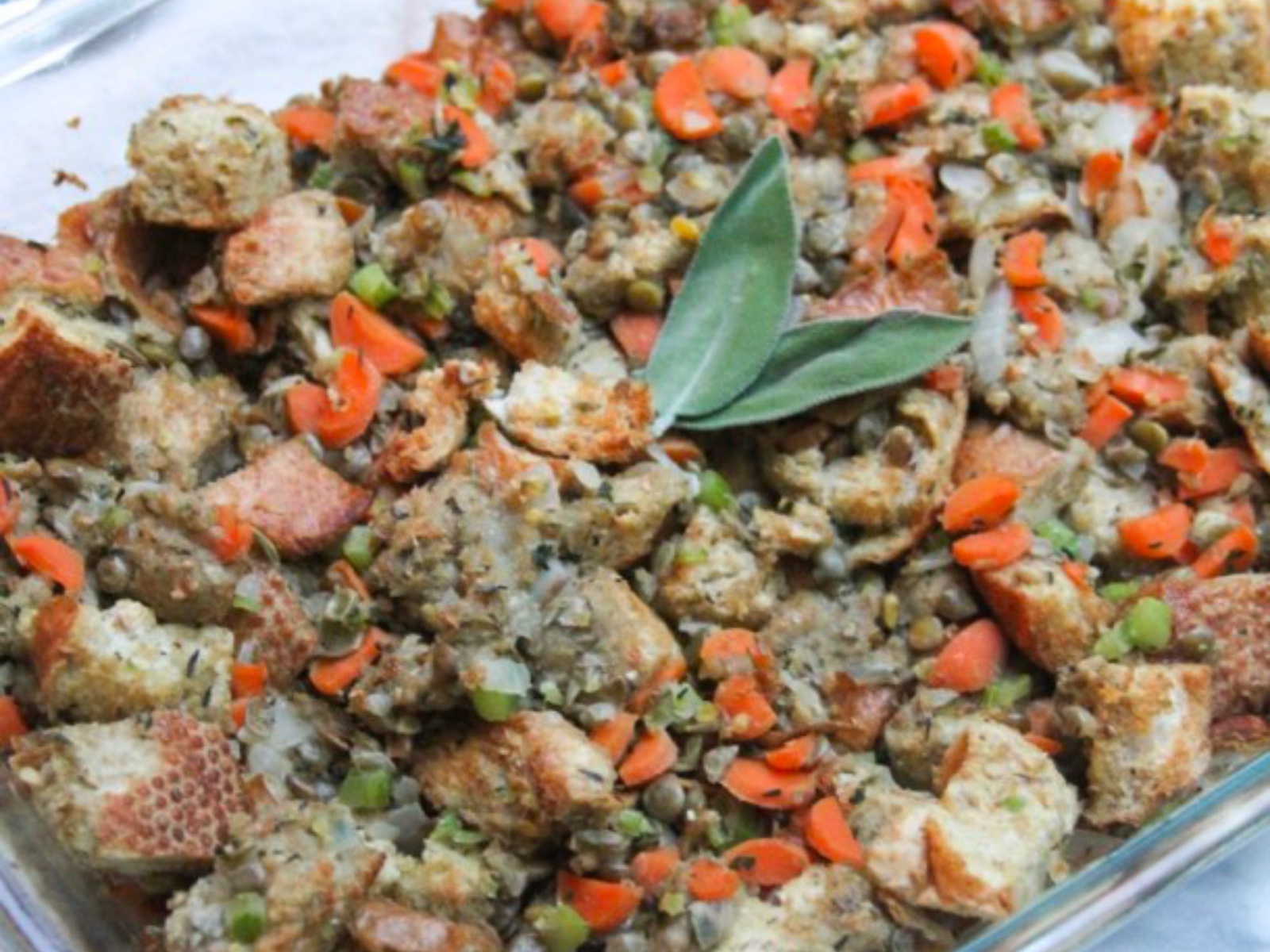 Taavi Moore‘s Herb and Lentil Stuffing is so much healthier than your traditional stuffing. Full of nutritious veggies and a little protein boost….lentils! No need for store-bought bread crumbs, fresh bread gives it an extra kick. It absorbs all the yummy flavors, contributing to an even yummier stuffing. 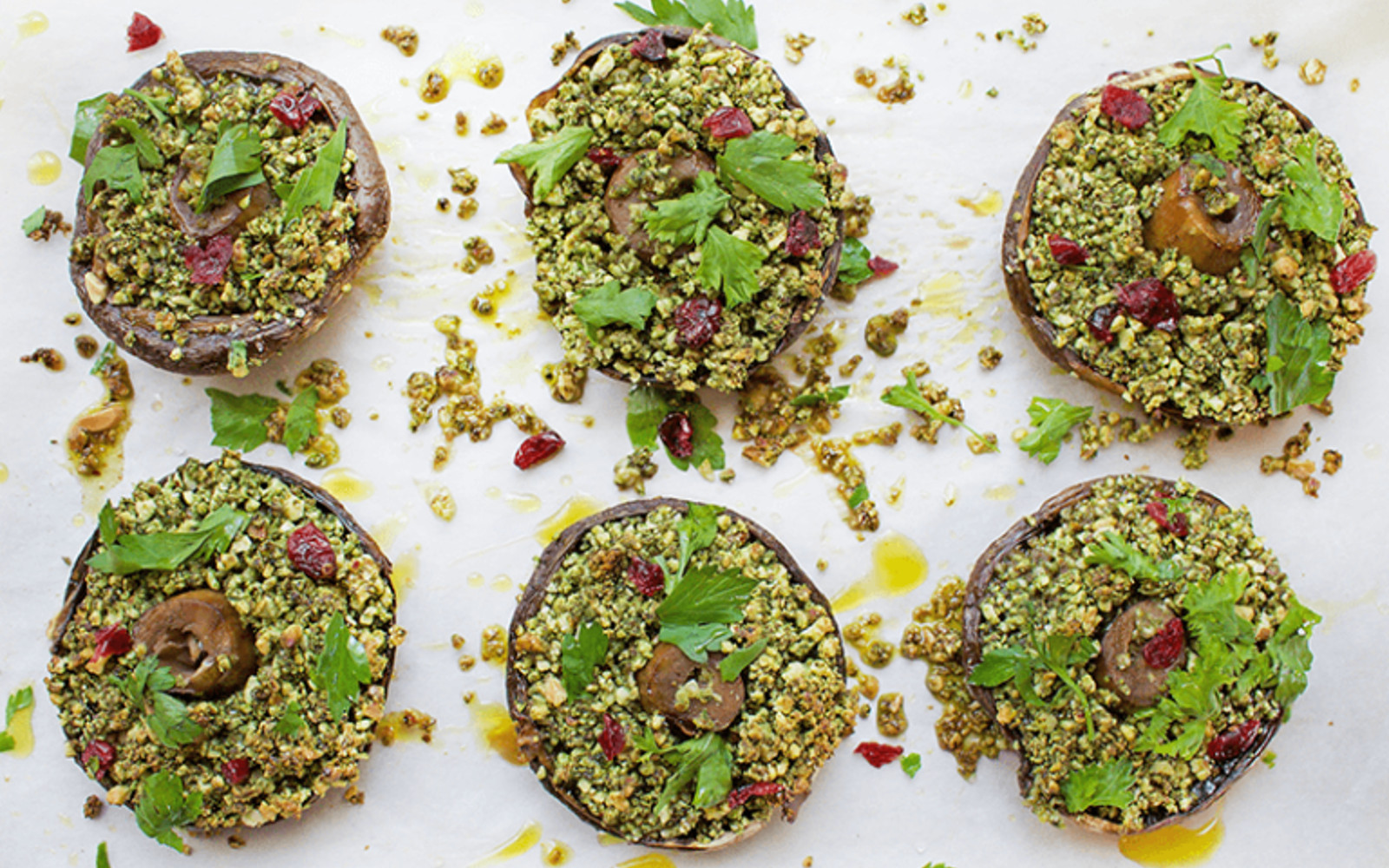 Jessica Sepel‘s Almond and Herb-Stuffed Mushrooms is so meaty — you would never even guess it’s vegan! An amazingly easy recipe full of flavor and simple ingredients.

Still need more Thanksgiving ideas? We’ve got plenty! Check out our Ultimate Thanksgiving Guide for all the plant-based Thanksgiving recipes you could hope for, from appetizers to desserts and everything in between. We also highly recommend downloading our Food Monster App, which is available for iPhone, and can also be found on Instagram and Facebook. The app has more than 15,000 plant-based, allergy-friendly recipes, and subscribers gain access to new recipes every day. Check it out!