How Eating the Rainbow Can Help Protect Against Cancer 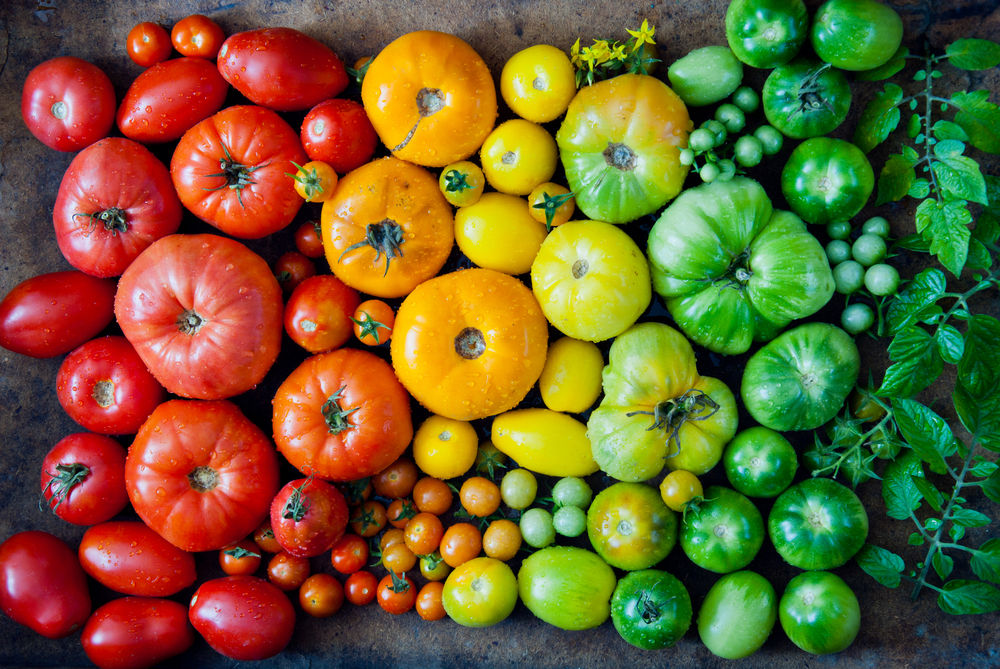 It’s fair to say that cancer is a true health crisis today, but not one that we are powerless to. It was once thought diet had no correlation on cancer, but we now that’s far from the truth. Over the last decade, we’ve seen limitless research backing a plant-based diet as a means to fight cancer. From doctors such as Dr. T Colin Campbell, to Dr. Neal Barnard, to Dr. Joel Fuhrman, Dr. McDougall, and more, medical powerhouses now firmly state that animal foods cause cancer and plant-based food prevent it.

That’s an incredibly powerful statement when you stand back and look at it; especially since we live in a society that prioritizes animal food production over almost anything else.  Considering the food guide pyramid was largely funded by the dairy industry and our entire agriculture system today runs largely on the production of animals for the American diet.

There’s no coincidence that the rise of cancer the last 25 years has grown with the massive growth of the animal food production industry. Perhaps it’s easy to live in disbelief for a short time, but a culture made up of McDonald’s, fast food pizza joints, ice cream shops, and even diets that promote animal products for the use of weight loss, is sure to get an awakening at some point or another.

Eating the Rainbow for Cancer Prevention and Protection

The war against cancer, however, is never black and white. But a diet rich in colorful fruits and vegetables may just be one of the best ways to treat cancer of all. Plants contain pigments that give them their colorful hue, which indicates their antioxidant content. Antioxidants  boosts immunity and fights off disease (such as cancer.) Many of them also contain a large amount of special nutrients or specific antioxidants that have directly been linked to cancer prevention.

Why Animal Foods Are Not a Health Food for Cancer Prevention

The Physician’s Committee for Responsible Medicine (a medical powerhouse documenting case studies for a plant-based diet against cancer and diabetes) shares that certain foods contain certain colors that come with special cancer-fighting benefits. They also share that drinking just two glasses of milk a day  increased cancer risks to 60 percent, and eating 35 grams of dairy protein increased cancer risks by up to 32 percent! Meat consumption was linked to a 28 percent increase, and the average Western diet (rich in processed and fast foods) increased risks by 200 percent!

Many factors can lead to cancer cell formation, however we can’t ignore studies that show high-fat, low-fiber foods such as animal products, boosts specific hormones that promote the growth of cancer cells, along with alter normal cells, which can lead to cancer cell growth. The Physician’s Committee for Responsible Medicine also advises women to reduce or eliminate their intake of meat, dairy, fried foods, and vegetable oils, due to the way these foods cause women’s bodies to create more estrogen, which increases growth hormone that leads to higher breast cancer risks, along with other cancers sensitive to female hormones. 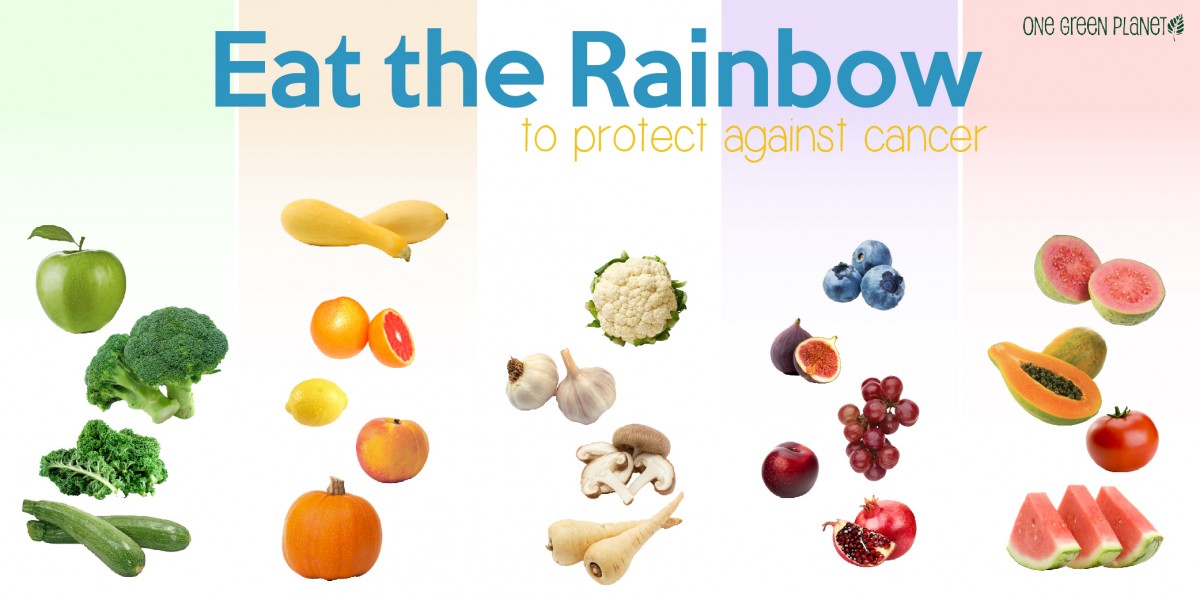 How to Incorporate the Rainbow Into Your Cancer Fighting Meals:

Start by replacing your processed or animal-based meals with foods from each color segment below and check out their benefits on their ability to fight cancer.

Fruits and vegetables such as cabbage, broccoli, kale, turnips, cauliflower, asparagus, collards, mustard greens, green apples, fresh herbs, zucchini, turnip greens, spinach, and Brussels sprouts contain either antioxidants known as flavones and/or indoles which have been directly linked to the prevention against cancer. They also contain high amounts of chlorophyll that prevents acidity in the body. Soybeans, green peas, and green beans are also high in antioxidants that support immune health even further.

Fruits and vegetables such as pumpkin, squash, peaches, yellow and orange bell peppers, lemons, cantaloupe, sweet potatoes, grapefruit, papaya, and apricots all contain especially high levels of Vitamin C for immune health, along with beta-carotene, a nutrient derived from the carotenoids found in these plants that give them their colorful hue. Studies have shown that women who eat carotenoid-rich vegetables reduce their breast cancer risk by up to 19 percent!

Fruits like watermelon, tomatoes, red peppers, papaya, grapefruit, and guava, all contain lycopene that also reduces the risks for prostate cancer and heart disease. Lycopene has also been shown to lower high cholesterol that can lead to increased fat cells that stimulate cancer cell growth.

Blue and purple foods like berries, figs, beets, pomegranates, grapes, raisins, and plums, all contain high levels of antioxidants known as anthocyanins or polyphenols that protect the heart and prevent heart disease. Their intake has also been linked to the prevention of certain types of cancers, according to The American Cancer Society.

If you think white vegetables don’t count, think again! They are rich in antioxidants known as phytochemicals like allicin (garlic and onions), beans and legumes (that contain fiber to reduce cholesterol and obesity), quercetin (onions and apples), selenium (mushrooms), Vitamin C (onions, apples, and parsnips), and a variety of vitamins and minerals that support the immune system (banana flesh, white nectarines, white peaches, cauliflower, artichokes, and potatoes.) Selenium was found to be one of the most prominent minerals for mens’ prostate health while garlic and onions remain as two of the top foods to boost the immune system and fight cancer cell growth.

There are so many ways to add fruits and vegetables to your diet. Here are a few great suggestions:

Now, let’s add some cancer-fighting color to your diet, what do ya say?