Most of the buzz around sodium shines a negative light on this essential dietary requirement. Basically, Americans are consuming too much sodium. Yet, this isn’t sodium’s fault. The sodium conundrum — the fact that it’s essential and yet can cause a variety of health issues —stems from its high usage in packaged and processed foods.

Salt is an additive in almost every single packaged food product. In fact, “around 75 percent of the sodium we consume is via these packaged and processed foods including hidden offenders such as lunch meat and frozen dinners.” On top of that, when you go out to eat, most restaurants will infuse their recipes with large amounts of salt.

Yet, sodium is an essential nutrient in a balanced diet.

Per the Scientific American, “an electrolyte is a compound which produces ions when dissolved in a solution such as water. These ions have either a positive or negative electrical charge, which is why we refer to these compounds as electro-lytes.” This electrolyte plays an important role in our enzyme operations, muscle contractions, fluid maintenance, glucose absorption, our nervous system, and even our heart performance.

With that said, when it comes to nutrition and sodium, it’s important to note that we’re talking about sodium chloride, also called dietary salt or table salt. This commonly used salt is around “40 percent sodium and 60 percent chloride” and around “90 percent of the sodium we eat is in the form of sodium chloride.” Where’s the other 10 percent? These are more hidden offenders — such as baking soda, also called sodium bicarbonate — which are generally used to preserve, enhance colors, and texturize our foods.

For those looking to decrease added sodium and incorporate natural sources of sodium, turn to plant-based foods such as beets, celery, carrots, spinach and chard. The following 15 recipes from the Food Monster App will provide creative and delicious ways to incorporate these naturally sodium-rich foods!

Beets are a great source of natural sodium. In fact, two beets offer up a whopping 77 milligrams of sodium per serving! This Sweet Beet Hash with Hollandaise Sauce by Crissy Cavanaugh is a colorful blend of sodium-rich beets — the recipe calls for three small or four large beets — healthy fat filled extra-virgin olive oil, protein-rich tofu and edamame, an array of warming and earthy spices including turmeric, cayenne pepper, cumin, paprika, and a bit more salt.

This Celery Sunshine juice by Maryea Flaherty will definitely brighten your day! With three simple, plant-based ingredients, this recipe offers a dose of naturally-sourced sodium, — around 74 milligrams from the two celery stalks — fiber-rich apples, and the cleansing antioxidants and hydrating power of lemon.

Who says you can’t have your cake and eat it too? With this Double Decker Carrot Cake by Michaell Johnson you’ll not only get to enjoy a delicious, plant-based slice of dessert, but you’ll also get a natural dose of sodium. In fact, one cup of grated carrot has about 76 milligrams of sodium and this recipe calls for a whopping four cups! Add to that healthy fat filled coconut oil and cashews, naturally sweet dates and maple syrup, and antioxidant-rich pineapple and lemon juice and you’ve got a nutrient-rich delightful treat. 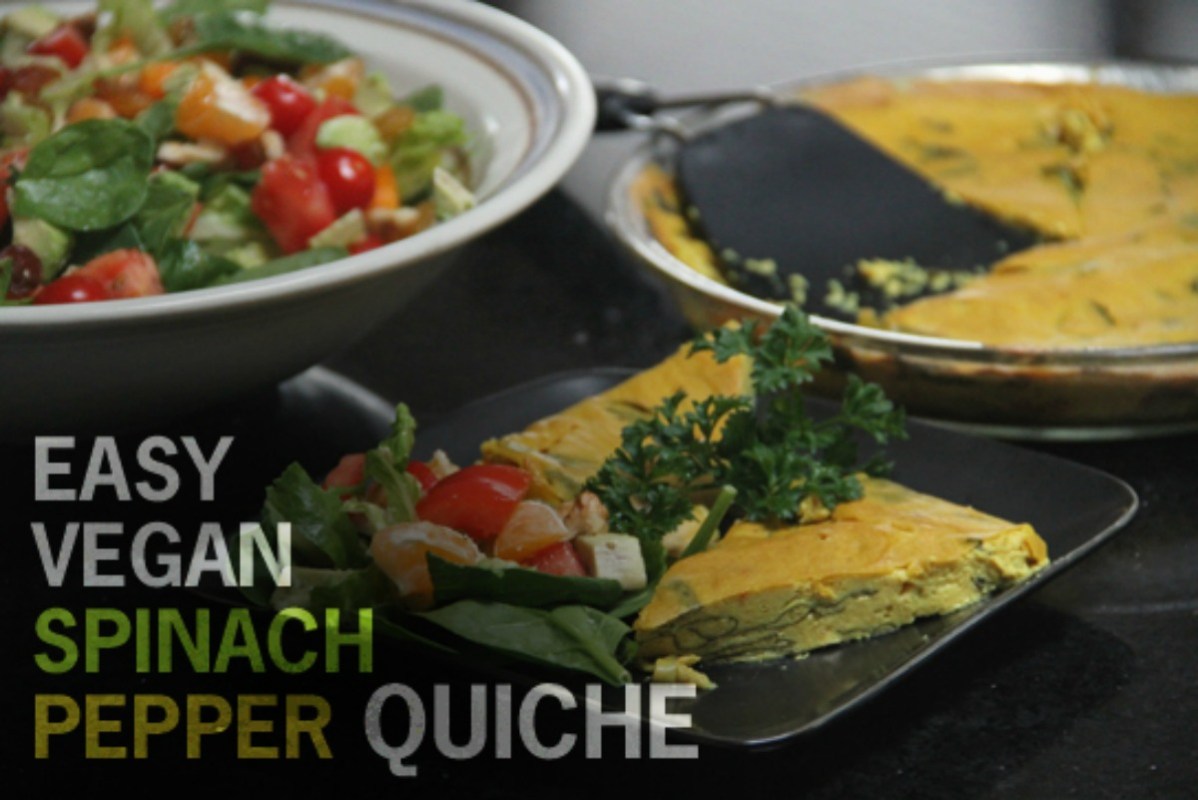 Quiche is one of those diverse recipes that tastes great with almost any ingredient and is just as good the next day. With this Easy Spinach and Pepper Quiche by Nikki and Zuzana, you’ll have a satisfying, nutrient-rich, plant-based, and completely vegan breakfast that can last all week! Along with protein, B vitamins, and amino acids, this recipe will also nourish your body with about 47 milligrams of naturally sourced sodium from two cups of spinach.

If you’re just starting out cooking with swiss chard, this Swiss Chard and White Bean Grilled Sammie recipe by Heather Poire will have you hooked! The key is all in the grilling! The heat provides a crisp, delightful crunch that is satisfying and comforting. Plus, this sandwich is packed with nutrients including sodium-rich chard (one cup offers up around 76 milligrams), protein-filled beans, and healthy fat-filled extra-virgin olive oil.

Offering a unique blend of sodium-rich beets, soothing ginger, refreshing mint, and naturally sweet pomegranate, this Pomegranate Beet Citrus Smoothie with Mint and Ginger by Viktoria Radichkova is the perfect summertime beverage! Plus, while you’re savoring the complementary flavors, your body will be thanking you for a healthy dose of detoxifying and immunity boosting antioxidants and vitamins.

Serve this Savory Celery and Pumpkin Soup by Emilie Heck as a side, warmed in a large mug, or chilled on a summer day. This savory soup not only provides a natural source of celery-derived sodium, but you’ll also get a helping of antioxidants from half a chopped yellow onion, healthy fat from coconut oil, antibacterial properties from 2 cloves of fresh garlic, and a filling, delicious, vitamin-rich dose of organic pumpkin.

Bacon from carrots? It may seem impossible, but this Baked Smoky Carrot Bacon by Lisa Andersson and Erik Huss flawlessly executes vegan-friendly, carrot-based bacon that you’ll want every morning of the week! The key is in the rapeseed oil, which is essential to make your carrot-bacon crispy and browned. Plus, carrots are a rich source of natural sodium, which means you can feel free to leave out the table salt and still get a healthy dose of sodium.

Looking for a gluten-free, yet savory and satisfying risotto recipe? This Roasted Squash with Mushroom and Spinach Risotto by Christine DesRoches is a tasty gluten-free alternative and is also great for your family dinner or larger gatherings. It’s nutritionally packed with natural sodium-rich spinach, your choice of healthy-fat filled oil — avocado, coconut, or macadamia — and complemented with the earthy flavors of mushroom, red kuri squash, and shallot.

One of the best tricks for a plant-based, nutritionally-rich, balanced diet is to combine as many vibrant colors on your plate as possible. This 15-Minute Rainbow Chard, Red Bean, and Peanut Stew by 15 Minute Vegan accomplishes this in delicious and elegant style. This stew combines bright red tomatoes, deep brown kidney beans, purple onion, and a splash of green cilantro along with sodium-rich chard.

Maybe carrot cake is not your jam, but the idea of healthy sodium from desserts has you intrigued? Try this Red Velvet Cheesecake Brownies by Megan Sadd. Infused with the naturally sweet and sodium-rich design of beet powder, this recipe uses healthy-fat filled cashew butter, maple syrup, and protein-rich chickpeas to recreate a dairy-free and gluten-free alternative to cheesecake.

While you may wait all year for Thanksgiving just for your favorite stuffing recipe, but why not enjoy this comforting, hearty, and satisfying recipe all year round? For those plant-based eaters, this Onion, Celery, and Mushroom Stuffing by Rhea Parsons is the perfect alternative! Parsons packs this animal product-free recipe with herbs including bay leaf, sage, thyme, rosemary, oregano, nutmeg, parsley, and freshly ground black pepper. Complementing this diverse palate are subtle, yet flavor enhancing onion, cremini mushrooms, garlic, and sodium-rich celery ribs.

Carrots are naturally sweet and easy to emulsify, making them the perfect ingredient for a sodium-rich, comforting soup such as this Carrot Miso Soup by Julie West. West takes a traditionally boring carrot soup recipe, adds a unique and delicious twist of sesame oil, ginger, and miso paste, and thickens and combines with protein-rich silken tofu.

Maybe carrots are a bit too sweet for you or you’re looking for a mellower, yet sodium-rich addition to your weekly regimen? This Spinach Artichoke Soup by Gabrielle St. Claire could be a great alternative! With five to six cups of fresh spinach in this recipe — 23 milligrams of sodium per cup — you’re looking at a hearty source of naturally derived sodium. St. Claire enrichens this soup with the rough design of leek and artichoke, natural thickening agents of cashews, full-fat coconut milk, nutritional yeast, and vegan parmesan, and balances the flavors with white wine and veggie broth.

Swiss chard is easily identifiable by a series of delicate red veins running through its deep green leaves, yet swiss chard is actually one tough leafy veggie! This tough design makes it perfect for these Swiss Chard Enchiladas with Avocado Cream by Meghna Purandare. With a dose of natural sodium from swiss chard, these enchiladas will also deliver on those classic enchilada flavors from black beans, corn, onion, avocado, cilantro, and a helping of mouth bursting spices including cumin, oregano, paprika, and pepper.