Seriously? Kangaroos Are Being Culled to Make Way for Cows. How You Can Act – Now! 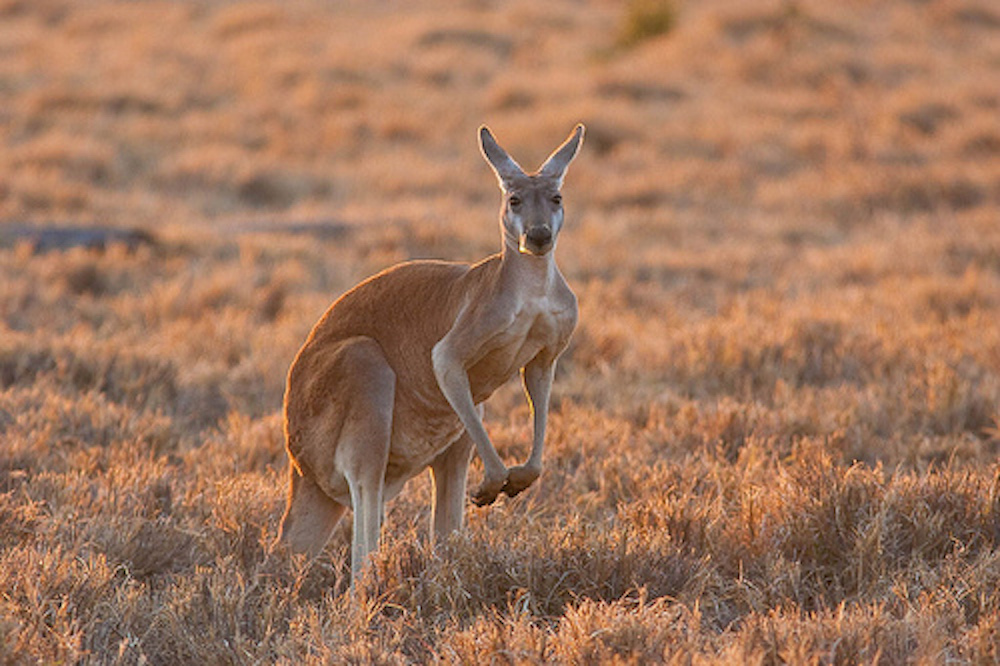 They bound across the flat red earth and have survived thousands of years of harsh droughts and floods; kangaroos are magnificent creatures that have an integral place in the Australian outback. This island “down under” is the only place you can find the kangaroo in the wild, along with the other unique marsupials such as the koala, wombats, and wallabies. On one hand, Australia is proud of it’s protected mascot, and embellishes sports teams, airlines and their national emblem with it and who can forget “Skippy,” the show, which was a worldwide success. But Australia also has a dirty secret; in the dark night, out in the bush where no one can see, three to four million kangaroos are being killed every year in the biggest land-based wildlife slaughter on the planet.

How can This be Happening?!

There are over 100 million sheep and cows that populate the Australian land, with two-thirds of the country taken up by farming; much of it for grazing stock animals. These sheep and cows hold the place of priority over wildlife when it comes to accessing feed — but not because of the concern for their welfare as individual animals, but because they are commodities in the very influential animal agriculture industry. In normal conditions, Government studies show that kangaroos do not compete with stock animals for food, but in drought times they do, so the way in which Australia manages this is to kill the wildlife first — in the millions. Some are then turned into meat for humans, others into pet food, some into leather and others are left to rot.

The Government does attempt to regulate the annual killing by giving out tags to harvesters (hunters) to record how many kangaroos are being shot — but this does not take into account all the mis-shot or undersize dead kangaroos that are left behind, nor the hundreds of thousands of joeys that are bashed to death by blows to their head after being wrenched out of their dead mothers pouches. It is also very hard to keep an accurate record of what is happening to the kangaroo populations in such a vastly huge and isolated country and some scientists are concerned we are already causing irreversible damage to their ongoing survival. History has shown, even when there is data, when a price tag is put on the head of our wildlife, eventually, the total species will be put at risk; just look at the devastating situation of our marine life caused from over-fishing.

There are luckily still tens of millions of kangaroos in the wild, but with such a relentless harvest for how much longer will this be? Only 30 percent of joeys survive their first year and in drought times, kangaroo’s populations can fall by over half. As the hunters aim for the large males as they are worth more money, the gene pool of the kangaroos will inevitably become weaker and smaller as the smaller weaker males are left to breed — and this will mean the future kangaroos will become more susceptible to disease. We are risking the ongoing survival of one of the last large roaming mammals of the land. Will we only be concerned enough to stand up and say “there must be another way” when they become endangered?

The kangaroos are perceived as pests to the farmers and this is the manner in which they are presented in the Australian media and have been since settlement over two hundred years ago. This has created an emotional distance between these vulnerable intelligent animals, which then allows for the much of the Australian population to be OK with the cull to go ahead every year. It has similarities to the seal clubbing in Canada in the way in which it is socially acceptable for the Canadians (not all) but for anyone outside of the country, it is blatant to see that this is not OK; that this wildlife must be protected not slaughtered and that there will be ramifications on the populations long term. This means, like with the seal hunt in Canada, for something to be done about the dire situation with the culling of the kangaroos, the world must speak out and cannot let Australia get away with it unquestioningly.

Kangaroo meat and leather is sold around the world — just last year Gucci released a range using kangaroo leather. Do your part and avoid buying kangaroo products and get vocal. The UK residents made such an outcry about the industry, most supermarkets pulled kangaroo meat from their shelves. Russia stopped their import in 2009 due to high levels of E. coli and salmonella found in the meat and California reinstated its ban last year around controversial circumstances.

“Californians want nothing to do with Australia’s massive commercial slaughter of millions of these wonderful creatures every year,” said Wayne Pacelle, chief executive of the Humane Society of the United States. Let’s spread this ban. Australia has the worst extinction rate on the planet in their short time since settlement — and it has often been with animals once perceived as “over abundant.” Are we going to sit back and let this happen to the kangaroo too?

This is hardly the first time livestock expansion has been at the center of a specie’s decline. In the U.S., the same is being done to native wild horses in addition to wolves. In parts of South America, the jaguar is being targeted by cattle interests. There is a global trend pitting wildlife against domestic livestock – to no fault of the animals themselves, but rather economic interests. While this reality is frustrating to learn, we are hardly powerless in the matter. We can all help protect the future for wildlife and conserve their rightful habitat with our food choices. By choosing to eat more plant-based foods, you can help lower the demand for meat and lessen the need for cattle farmers to expand in wild lands. To learn more about how you can help save wildlife with your next meal, join One Green Planet’s #EatForThePlanet campaign.