What Every Activist Can Learn From the Greenpeace Documentary, ‘How to Change the World’ 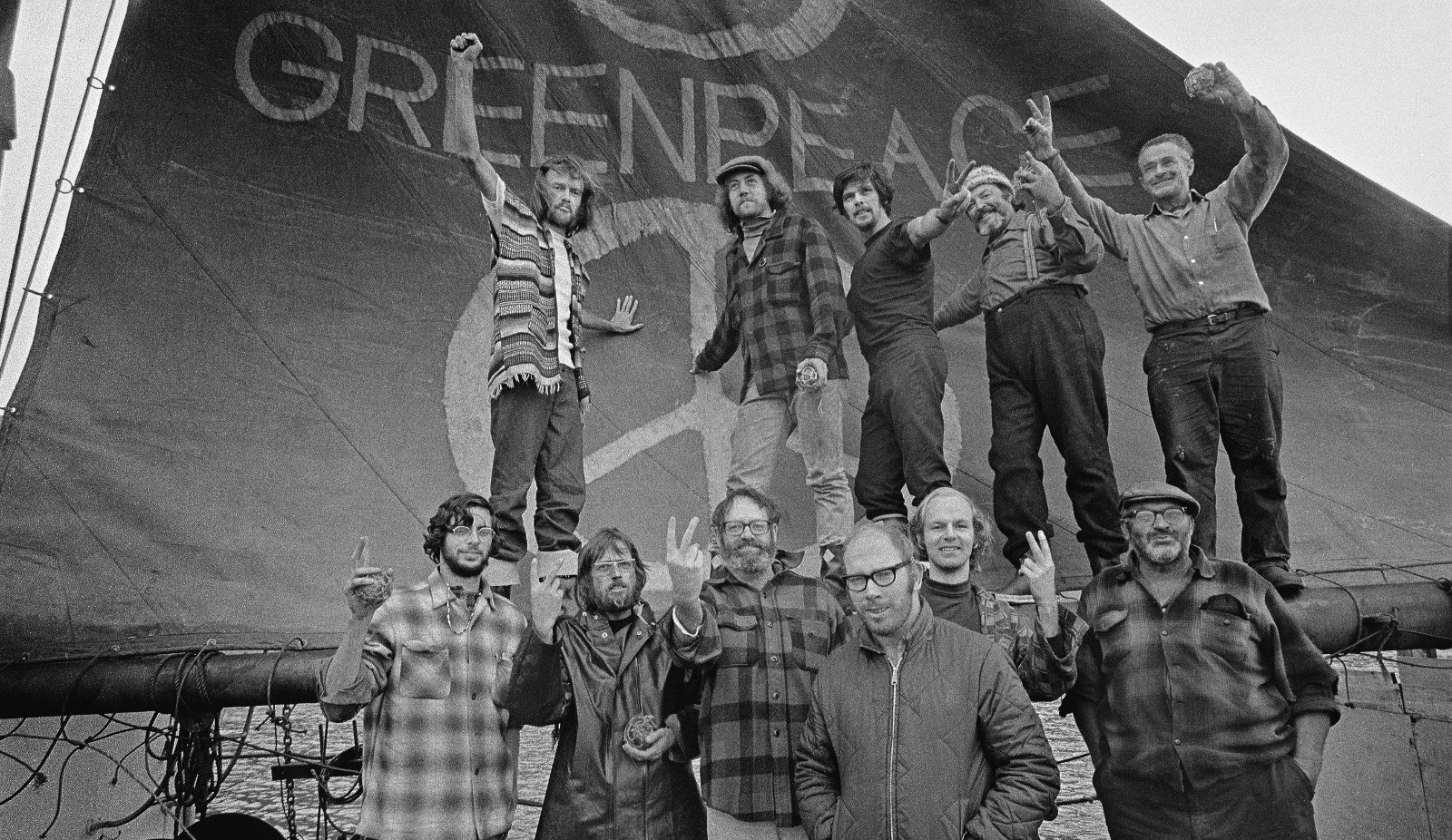 “Never doubt that a small group of thoughtful, committed citizens can change the world; indeed, it’s the only thing that ever has.”

In watching the documentary “How to Change the World,” directed by Jerry Rothwell, that charts the story of the founding of the environmental non-profit Greenpeace  and the birth of the modern environmental movement, this quote rings particularly true.

Today, Greenpeace is more than just the most visible environmental organization in the world with offices in over 40 countries, but an iconic brand and enterprise that is remembered for such bold campaigns as rallying a fleet of kayakers against Shell, dressing up volunteers like orangutans to protest Nestle’s destruction of Indonesian forests for palm oil, and of course, their original Save the Whales campaign.

Given the current scope and influence of this organization, it seems hard to believe that it all started with a group of idealistic “hippies” who wanted nothing more than to show the world how backward our understanding of ecology and the interconnectedness of all beings was (it can be argued, still is).

“How to Change the World” brilliantly captures how the small group of disorganized activists that founded Greenpeace were able to use a combination of direct action and creative communication to garner worldwide attention and support, which eventually led to the founding of one of the world’s most powerful environmental groups. Here are a few things we learned about being activists and fighting to change the world from their story:

1. The Power of Media 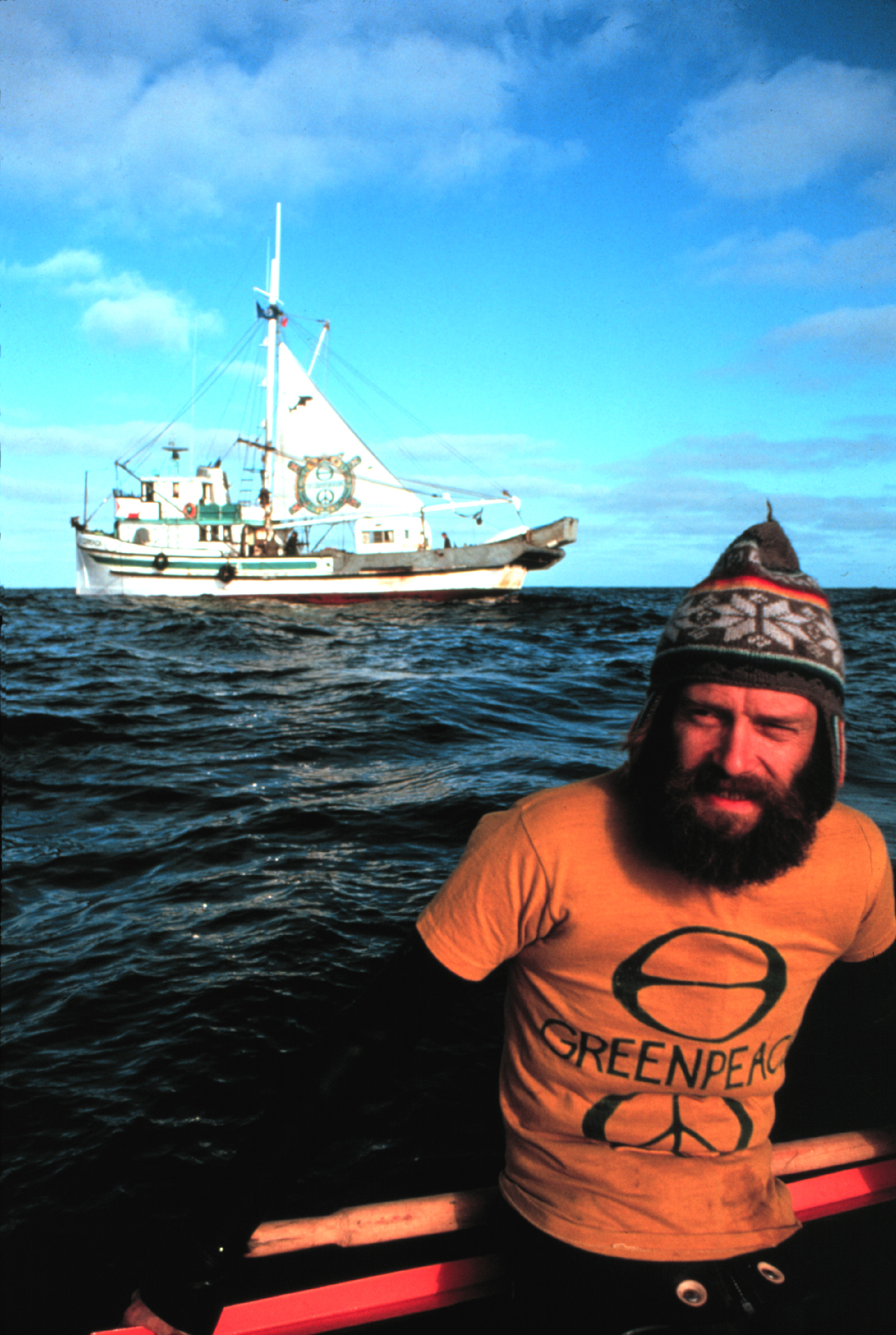 On their founding voyage in 1971, a handful of determined activists leased a small fishing vessel called the Phyllis Cormack, and sailed out to the Amchitka Islands in Alaska to protest U.S. nuclear testing off the coast of Alaska by placing themselves in harm’s way. Even before the Internet or social media had been invented, Bob Hunter, one of Greenpeace’s founders, knew that if they could stage an epic protest out at sea and disseminate powerful photos and video clips across the news, they would be able to raise awareness about the geological destruction and possibility of a tidal wave as a result of the test. Hunter named this sort of content a “mind bomb,” a type of media that we would probably refer to as “viral,” today.  Although Hunter and the rest of his crew was intercepted by the U.S. Coast Guard even before they got close to the Amchitka testing site, their voyage sparked tremendous media attention and public interest about a brave crew of protesters that sailed off in the face of adversity.

Hunter understood that media was a powerful tool for change. With this in mind, Greenpeace became known for staging epic, usually dangerous, protests and capturing striking photos and videos was a great way to garner widespread attention and support. Hey, you can’t get people to stand up and act if they don’t know a problem exists and there’s no better way to show them than through incredibly impactful images. (We do it right here, all the time!)

2. A Small Focused Group Can do Anything (If Not More) Than a Large One Can 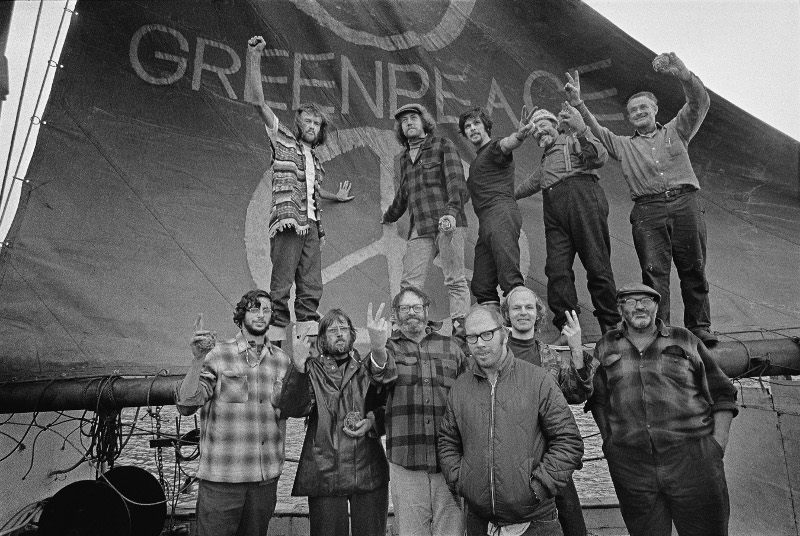 The original Greenpeace crew was composed of a handful of people, amongst them was a journalist, a few scientists, a fisherman, a photographer and their ship’s captain. While they all brought unique skills (and personalities) to the table and they weren’t the most organized group, they were still able to achieve tremendous success. This was possible primarily because they were all motivated by the same mission (to expose global environmental problems and inspire people to make a difference) and were willing to use creative, and often controversial tactics, to achieve their goals.

By thinking outside the box, this motley crew inspired millions across the world to stand up for the planet and kick-started the modern environmental movement.

3. The Importance of a Cohesive Mission and Vision 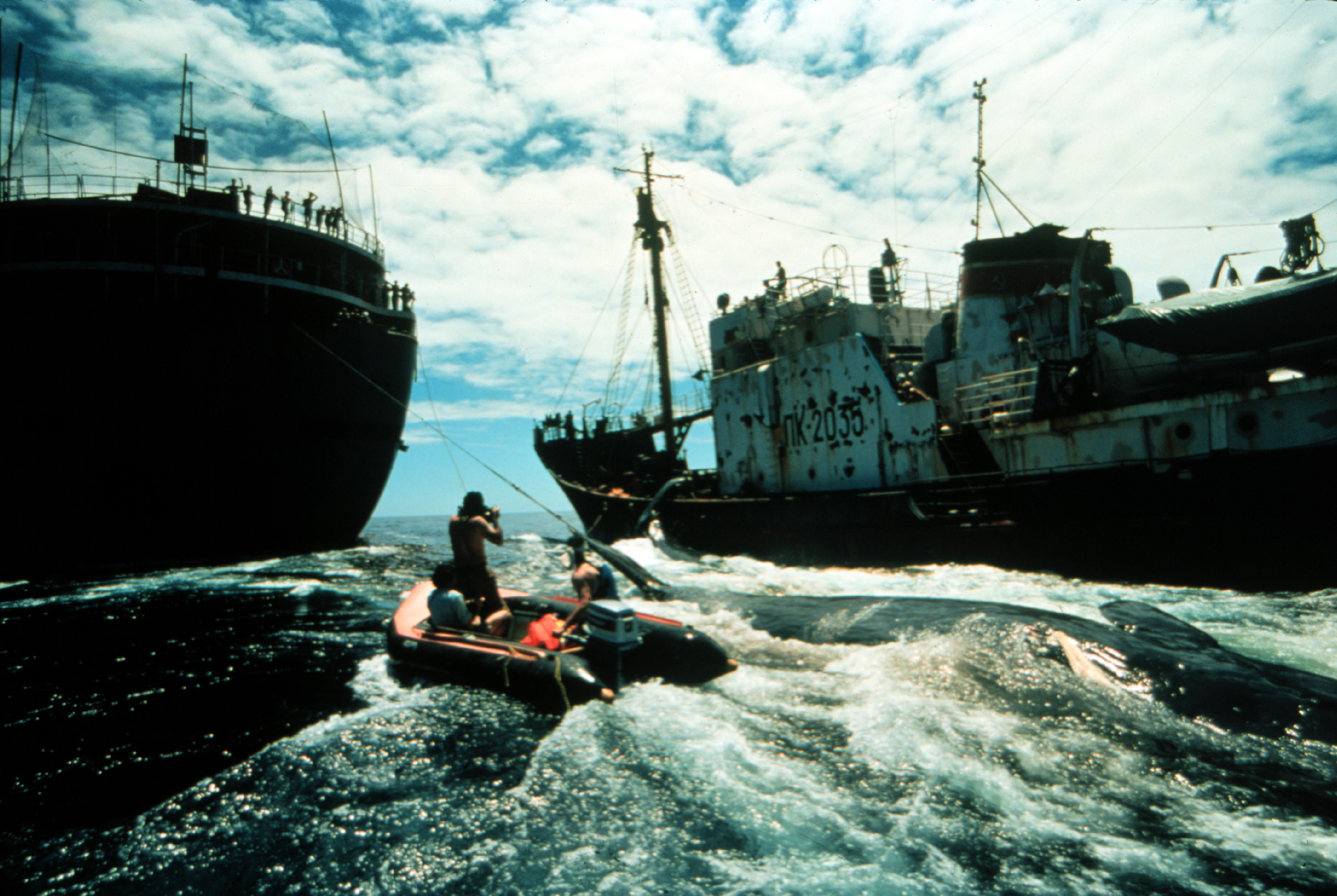 When fighting for the environment or animals, passion for the subject matter is an absolute must. Bob Hunter and his crew would have never put themselves in the line of a nuclear explosion if not for their passion to effect change. But, without a cohesive mission, vision, and strong leadership, all of that passion can be destructive. In the early days of Greenpeace, the lack of a willing leader, an organizational structure and the inability to settle on a clear strategy for growth, ultimately lead to in-fighting and the overgrowth of egos. Eventually, the core team broke apart, with one of the founding members like Paul Watson leaving to start SeaShepherd and Patrick Moore to launch a poignant anti-Greenpeace organization.

4. Never Forget What Drives You 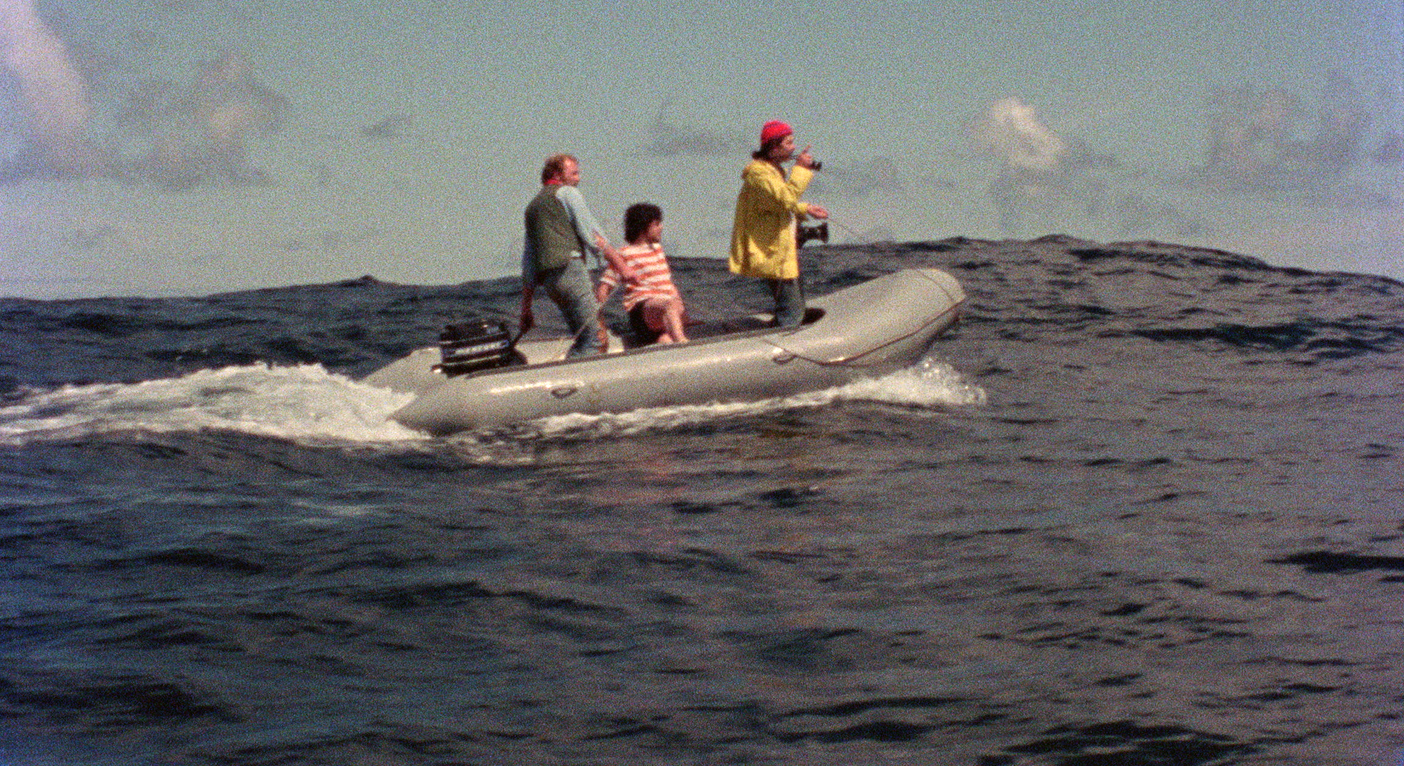 Most people don’t realize that changing the world takes a lot of hard work and on most days the reasons to give up probably outnumber reasons to continue fighting. Being an activist is more than just throwing yourself in front of a whaling ship or delivering a passionate speech, it also involves doing “administrative” tasks like filling out paperwork, answering emails, hiring and managing teams, raising or making money and a whole myriad of other tasks that are anything but glamorous or inspiring. To add to it, when one is driven by passion and the hunger for change, challenges and failures don’t just become roadblocks on the path to success, but they can also start to take an emotional toll. The pressure of managing the original Greenpeace crew grew too much for Bob Hunter to handle and he retreated from the group for a number of years.

If you don’t consistently and consciously remind yourself of the reasons why you started down the path of activism, you will likely lose focus and burn out.  Not losing sight of the mission, vision and driving passion for what you’re trying to achieve is the only way to stay motivated and continue working towards the greater goal, no matter how hard it gets.

5. You’ve Got to be a Little Badass to Shake Up the System 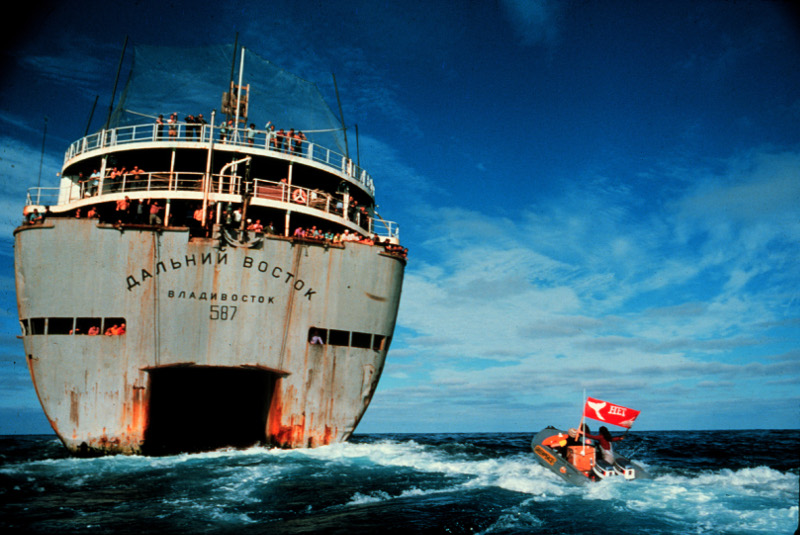 No one ever made a huge change in the world without thinking outside the box and ruffling a few feathers first. As Gloria Steinem said, “The truth will set you free, but first it will piss you off.” Some think that the only way to be successful is to follow a prescribed pattern or path created by those that came before us. Certainly, one should learn from successful activists and apply those lessons, but if you’re afraid to tread new ground, you will never  carve your own path.

When the original crew of the Phyllis Cormack set sail and put themselves directly in harms way to protest a nuclear test and later to track down whalers, they had no blueprint to follow. What they were doing had never been done and to most people it would seem like a crazy, illogical idea. But all Bob Hunter and crew knew was they needed to capture images that would shake the public from their apathetic slumber … and look what they ended up creating!

In the 21st century, we no longer need to sail the high seas to create “mind bombs” to effect change. We all have the power to be change makers in a myriad of creative ways, and thanks to the power of the Internet, we can capture the hearts and minds of people across the world in minutes.

So throw off the bowlines and set sail by doing things differently and defying norms.

As Steve Jobs said, “the people who are crazy enough to think they can change the world are the ones who do.”