Meet the Food Technology That May Save the Planet: Plant-Based Protein 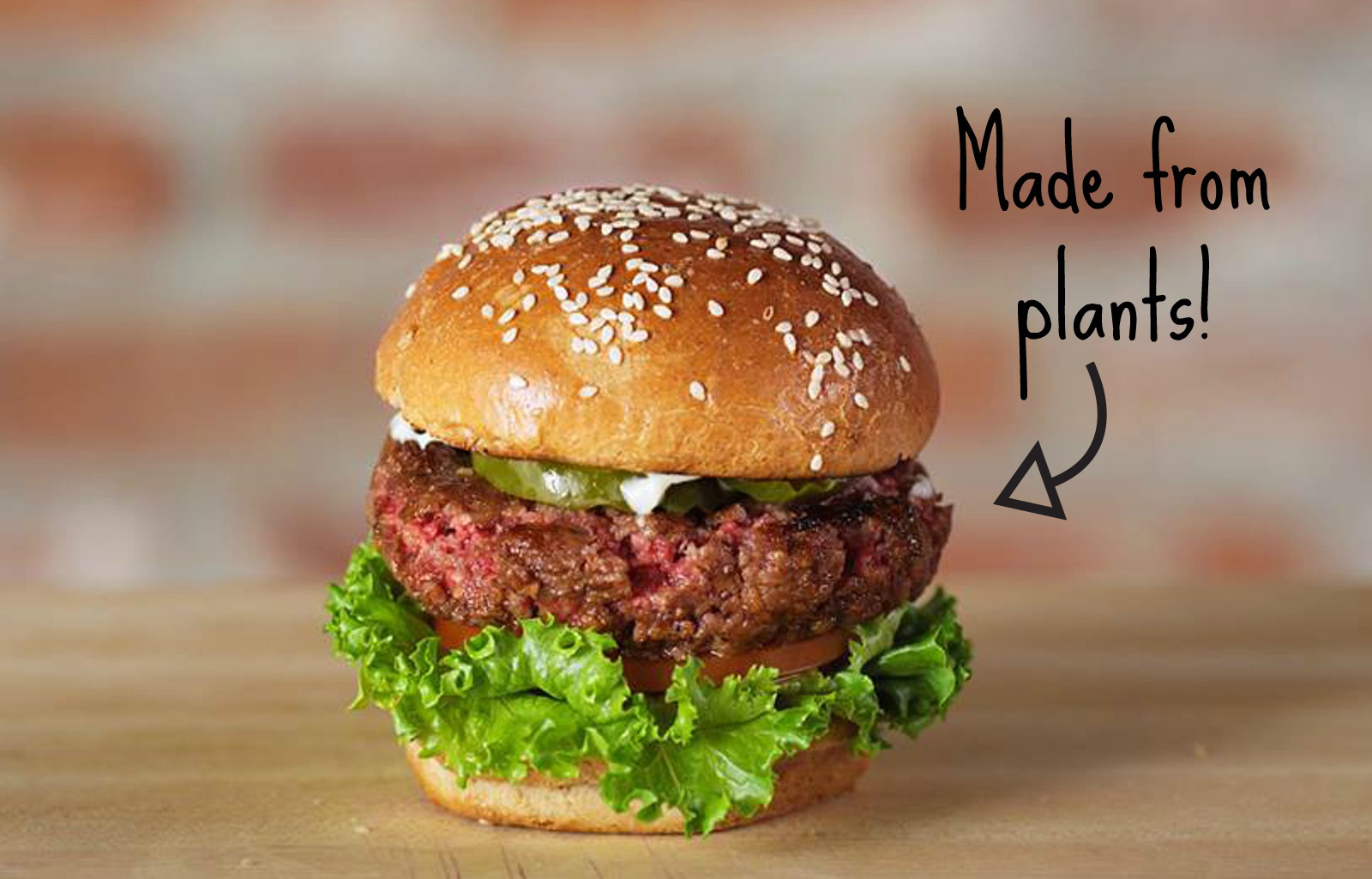 As the world’s human population continues to grow, the question of how we’re going to meet the protein needs of the planet is rapidly becoming the biggest challenge of our time. It’s no secret that the developed world is obsessed with protein, with the average person in the U.S. consuming 103 grams per day, around double the actual recommended amount, two-thirds of which comes from animal sources. On the other hand, animal protein consumption is on the rise in developing countries like China and India because of rising incomes and improved quality of life. Forecasts suggest that in a few decades, developing countries’ consumption of animal protein will reach the current levels of the developed world.

The True Cost of Our Protein Obsession

But what most people don’t realize is the tremendous cost producing animal protein has on the planet. At current rates, 45 percent of land worldwide is occupied by animal agriculture and another 33 percent is used just to grow livestock feed (dependent on commodity crops like soy and corn that are devastating the planet). Not to mention, the United Nations Food and Agriculture Organization (FAO) estimates that livestock production is responsible for 14.5 percent of global greenhouse gas emissions while other organizations like the Worldwatch Institute have estimated it could be as much as 51 percent. We’re pushing the world’s resources to their absolute limit now, all for the sake of creating animal protein – and despite all of this, 850 million people still suffer from hunger worldwide. To call the current food system dominated by the production of animal protein inefficient and outdated would be a gross understatement.

The obvious solution to this challenge would be to invest in technological innovations in livestock production to ensure worldwide food security and stability of the global economy. The question we face though is whether that is going to be enough. Given the scale of the problem we’re dealing with and the rate at which we’re depleting our natural resources to fuel a food system that is incapable of even feeding our current population of seven billion people, I believe we need nothing short of a leapfrog change. Yes, a mere upgrade to our current system is not going to handle the rising global demand for protein. What we need is an entire new technology stack reimagined from the ground up, capable of exceeding required protein outputs without sucking up precious inputs like freshwater, land, energy, and grain to grow animals that we eventually turn to food.

Luckily, the answer has been staring us right in the face for years. If you look closely at our current food system and livestock production, in particular, you will learn that producing enough food is not the problem. The fact is that the world currently produces about enough calories for 10-11 billion people, except that a significant portion of the calories from our staple crops are used to feed animals. If all current crop production used for animal feed and other non-food uses (including biofuels), were targeted for direct consumption, around 70 percent more calories would become available – potentially providing enough calories to meet the basic needs of an additional four billion people!

The simple answer would be to encourage people to cut down on meat consumption and eat more plant-based foods, which is undoubtedly the right advice. But what about the billions of people that just refuse to cut down or give up on meat because of its cultural significance or because of their love for its taste and texture? Luckily, even that answer has been right under our noses, but the technology didn’t exist to harness its power and transform it into foods that can replicate the much-sought-after animal proteins of today. The answer can be found in the plant kingdom.

Newsflash: plants have protein, but today’s food scientists aren’t just extracting protein from soy and wheat any longer to produce meaty alternatives. They are going way beyond by breaking down the structural components of meat and other animal sources of protein, turning to the plant kingdom and using computing power to find viable replicas or combinations that can result in a product that tastes, feels, and even smells like the real thing with an identical (or most often, enhanced) nutritional profile.

Innovations in the plant-protein space have the power to transform food as we know it and write the story of the future of food. By choosing plants as a direct source of protein, we would use less of our planet’s finite resources, drastically cut down our carbon footprint and give thousands of species a fighting chance at survival. Most importantly, we could redirect enough grain to feed our entire growing population over the course of the next 30 years and beyond.

Great examples of tech-driven plant-based proteins that are already in grocery stores or hitting the market soon include Beyond Meat, which is using technology to transform pea protein into beefy meat crumbles, burgers, and chicken strips. From a protein standpoint peas are hot right now, not only because they have a lower environmental impact (less land and water use), but also because of their high nutritional value, and functional properties that make them a versatile, allergy friendly, non-GMO clean protein powerhouse. But peas are hardly the only star in the plant kingdom that has been engineered in this way. Impossible Foods stumbled across the ultimate plant-based answer to animal protein in the form of a molecule called heme that gives meat its craveable flavor and smell. Although this chemical is exceptionally abundant in meat, heme is essential to every branch of life, including plants. Using a heme-containing protein naturally found in plants, Impossible Foods is making a burger that looks, tastes, and is even so close to the real thing, most people would never guess its base is all vegetables.

In terms of technology that has the potential to save our planet from the grips of total collapse, while offering a high-quality product that consumers actually crave and desire, plant-based proteins are well on their way to winning the race for the future of food. As I have said before, plant-proteins are to the food industry what Tesla is to the automotive industry. While one brand is yet to emerge with a product that has the obvious potential to single-handedly transform the global meat industry from the inside out, I believe it’s only a matter of time. The good news is I’m talking about a few years and not decades before this starts to happen.

In fact, even in the absence of a clear unicorn, the plant-protein space has been witnessing rapid growth, fueled largely by tremendous consumer interest in protein from cleaner sources. The current meat substitute or alternative protein market is estimated to grow to $5.2 billion by 2020 and according to some estimates, plant-based meats could make up one-third of the entire market by 2050. That’s just current projections based on consumer behavior and market trends, which I believe are far too conservative.

Even the Tech Elite Agree: Plant-Protein is the Future of Food

Bill Gates was an early adopter (and investor in Beyond Meat). He not only wrote about it two years ago by pointing out that there’s plenty of protein and necessary amino acids in plants, including the world’s four major commodity crops – rice, maize, wheat and soy, but he added “The problem is that instead of feeding these crops to people, we’re feeding most of them to livestock. And so we’re caught in an inefficient protein-delivery system. For every 10 kilograms of grain we feed cattle, we get 1 kilogram of beef in return. The calorie kick-back is just too low to feed a growing world population.”

But he’s not alone in the tech world. Silicon Valley’s elite are starting to recognize that animal agriculture is at the core of our broken food system and is in desperate need of disruption. In the past few years, venture capital firms have funneled billions in food technology startups that are developing innovative new products, several of which are plant-based. Firms like Obvious Ventures, Google Ventures, Khosla Ventures, SOSventures, and Horizons Investors are betting millions on companies like Beyond Meat, Hampton Creek,  Impossible Foods, Lyrical Foods, Muufri, Modern Meadow, and others to develop foods of the future.

The most recent affirmation comes from Eric Schmidt the Executive Chairman of Google’s parent company Alphabet. According to Schmidt, the development of plant-based proteins is one of the top game-changing “moonshot” technologies that will improve society. During a presentation to a ballroom filled with investors and business executives at the Milken Institute Global Conference in Los Angeles, he argued that replacing livestock with growing and harvesting plants could reduce greenhouse gas emissions and fight climate change. He also mentioned that the process of raising, slaughtering, and shipping meat products is inefficient and that looking to plant-proteins could also reduce the cost of food in developing nations.

The Food Tech Revolution is Here

The fourth industrial revolution is underway and plant-protein is at the forefront of a much-needed transformation in agriculture, driven by companies that are working to disrupt our food system by offering healthier, more sustainable foods. At the heart of this revolution is the adoption and proliferation of meat substitutes, dairy and egg alternatives that will mark the beginning of the post-animal agriculture era.

If you want a glimpse of what the future holds, look no further that the refrigerated and frozen sections of grocery stores. Plant-based milks are dominating the dairy aisle, a new dairy-free cheese, yogurt, and dessert brand seems to be popping up on shelves nearly ever week and plant-based meats and all-vegan frozen meals are literally flying off refrigerators the frozen foods section.

We are in the early stages of the development of a whole new food sub-sector that has the power to shape our food system into a more sustainable and just one. But this new economy lacks the essential building blocks, namely definition and structure that can help accelerate its growth. To meet this need and be a catalyst for this new industry, I recently launched a new project on One Green Planet called “Future of Food” that showcases the rise of a food ecosystem dominated by sustainable, vegan products.

Advancements in plant-protein are the kind of technological innovations the world desperately needs. In fact, it may be one of the only real shots we have to make our future on this planet possible.

After all, is technological innovation truly a sign of progress if it isn’t advancing society? And what good is a thriving society without thriving oceans and rainforests, an abundance of plant and animal species, as well as clean air and water? Can such a society even exist?

More importantly, would you want to live in it?