Why The Time to Go ‘Beyond Meat’ is NOW! 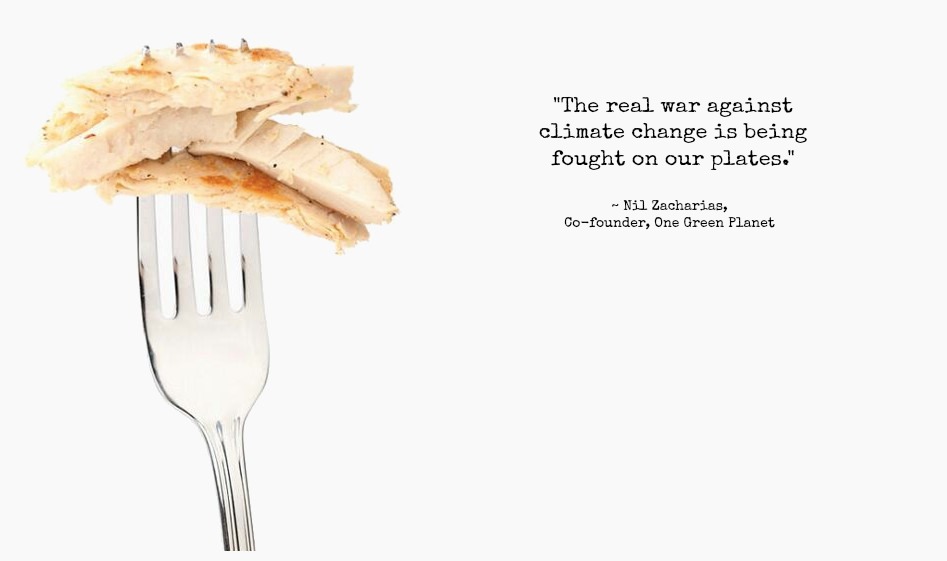 Contrary to what you may have heard, the war against climate change isn’t being fought only in the halls of Congress, between environmentalists and the energy industry. In fact, what’s happening at the policy level in this country, and around the world, is just one part of a much bigger picture.

The real war against climate change is being fought on our plates, multiple times a day with every food choice we make. I say this because one of the biggest challenges facing our planet, and our species is that we are knowingly eating ourselves into extinction, and doing very little about it.

The facts are fairly alarming. The United Nations Food and Agriculture Organization (FAO) estimates that livestock production is responsible for 14.5 percent of global greenhouse gas emissions, while other organizations like the Worldwatch Institute have estimated it could be as much as 51 percent; meat production is dominated by factory farms that use about 5.5 gallons of fossils fuels per acre, livestock already occupies 80 percent of the Earth’s total usable arable land, and industrial agriculture sucks up 70 percent of the world’s fresh water supplies.

That’s not even half of it.

Meat production contributes to air and water pollution, deforestation, antibiotic resistance, and animal cruelty. The list literally goes on and on. And to make matters worse, the global demand for meat is growing, particularly in China and India, and over the next few decades, the world will need millions of tons more meat than it does today.

Put simply, if we continue down this path, there’s absolutely no way we’re going to be able to feed the estimated 9 billion people that will be living on the planet by 2050.

We Know the Solution

We get it, don’t we? Eating meat is beyond unsustainable. Moreover, most of us realize that by cutting down or eliminating meat and other animal products from our diets, we’re not only helping to secure the future of the human race (and other species) on this planet, but also minimizing our own risk of diabetes, obesity, cardiovascular disease, and cancer while we’re here.

With such a simple, and obvious solution staring right at our faces, why aren’t we seeing a global shift away from eating meat, and instead seeing the global demand actually grow?

It’s because our taste buds are winning.

People Love Meat too Much

It’s true that some people can fall so in love with the wonderful world of plant-based foods that meat remains a distant, unappetizing memory. But this is not about those who are trying (they have plenty of choices), but about the billions of people who crave meat and no lentil, tempeh, or tofu burger with a side of kale will ever do.

You can’t really blame them. Humans have been eating meat for over 2 million years, and we’ve grown very accustomed to its unique taste and texture. The bottom line is that all the reasons to eat less meat pale in comparison to the fact that we have physiologically and culturally grown to embrace meat eating as the norm, and it’s going to take way more than a bunch of scary facts about meat and the environment to change that.

The way I see it, accepting that a majority of people have absolutely no interest in cutting down their meat intake, is not an admission of failure. On the contrary, it actually presents an interesting new challenge for those looking to bring about long-term change that will steer us off the unsustainable path we’re currently on.

Yes, we should be talking about the power of plant-foods and sharing ways to eat more plants, and fewer animals (we do that everyday here at One Green Planet). But I also see an opportunity to transform the industry that produces meat from the inside out, using science as the catalyst for change. And I’m not talking about incremental steps to make factory farming less of a disaster, or turning to pasture-raised ‘sustainable’ meat that has no practical way to be sustainable at scale. I’m talking about real out of the box thinking on the future of food that has the potential to leapfrog us into a better future.

That’s why I love what companies like Beyond Meat are doing, because they are using natural, plant-based ingredients, and applying technology to create plant-based meat that is nearly indistinguishable from animal protein. If they succeed, we may have a realistic shot at taking animals out of the meat production equation.

Are Plants the Future of Meat?

If you hate the taste and texture of meat, Beyond Meat’s products are definitely not for you. But for anyone looking to eat meat that’s affordable, healthy, tastes like animal meat, without any of the negative implications of consuming animal based protein, it is beyond perfect.

The first time I held a piece of Beyond Meat Chicken strips and pulled apart its fibrous layers, it freaked me out a bit, because  it was so much like the real thing. This was a bold step beyond any ‘faux meat” I had ever tried before, and suddenly all the media attention and the superstar investors, like Biz Stone, Evan Williams, and Bill Gates this company had managed to attract, started to all make sense.

Beyond Meat’s product is not just a good imitation of chicken, but it has the potential to be revolutionary. I had to find out more, so I chatted with Ethan Brown, founder and CEO of Beyond Meat, not only about my enthusiasm for their products, but also about where his company is headed.

Not surprisingly, I found out that Ethan shared my passion for reimagining the world’s food choices, but it also became very clear to me that Beyond Meat was not just a business for him – it is his life’s work. However, what did surprise me about Ethan was that even before talking about his company and its future plans, he first admitted that he wasn’t satisfied with Beyond Meat’s products.

“I cringe at our products that are in the market,” said Ethan.

Ethan went on to describe that his dissatisfaction actually stemmed from the fact that his company is obsessed with constantly updating and improving their products, which meant that the products in their lab were currently just so much better than what they have in the market (including the one I was raving about).“We literally take a chicken breast and put it under an MRI and compare it with Beyond Meat’s products to study the differences, and try to collapse those differences till it is ultimately the same.” I can only imagine how much closer their newer versions are going to be!

He also shared insights into Beyond Meat’s bold new way of changing the way people think about meat. Ethan described that he wants people to not think about where meat is from, but focus on what it is. “If we really break it down, meat is essentially just amino acids, protein, fats, water, trace minerals and trace carbohydrates. We can take all those things from the plant kingdom and assemble them in a way that has the same architecture as animal muscle. In this way, the product we end up with is essentially meat, and not some fake form of meat or a replication of meat.”

You can’t argue with the logic behind his approach, and with the right time and investment, there’s a very good chance they will get there.

The big question is really whether all the logic, time, and money in the world is enough to change people’s taste buds and food habits.  “We believe there’s a majority of people who want the experience of eating meat made from animals delivered through our meat made from plants,” explained Ethan.

I have to agree with him. While the global demand for meat may be growing, the demand in the industrialized world has not only stabilized, but it is actually starting to decline in countries like Germany and the United States.

Let’s take the United States as an example, where 33 percent (nearly 90 – 100 million people) of Americans are cutting down on their meat consumption, it’s not hard to imagine the tremendous market a good plant-based meat product has.

In addition, as the co-founder of One Green Planet, a publishing startup I started 2 years ago that is entirely focused on this specific segment of the population (hey, Green Monsters!), I know the market not only exists, but it’s also rapidly growing.  Our massive audience growth within a short span of time is just another indication of the potential of companies like Beyond Meat. People are looking to make more conscious choices and high quality plant-based products are nearly guaranteed to find hungry (and loyal) consumers.

Now that I’ve stated the facts, let’s think about the remaining  majority of the country’s population that is unlikely to cut down or give up meat. As Ethan and Beyond Meat continue to perfect their plant-based meat to taste and feel exactly like the “real thing,” it will only get easier to penetrate this market as well.

All of this makes Beyond Meat’s obsession with getting the world to eat meat made of plants seem like a really smart idea, whose time has finally come.

The Road to Going ‘Beyond Meat’

Ethan also shared some insights into Beyond Meat’s bold 25/20 Vision (i.e. a 25 percent reduction in meat consumption by 2020) and how they plan to actually make it happen.

Firstly, the company is growing incredibly fast. This time last year, Beyond Meat was in about 350 retail outlets and they plan on ending 2014 in over 4,000 retail outlets. However, considering there are over 30,000 grocery stores nationwide, Beyond Meat still has a long way to go.

For 2014, the company’s goal is to get their product in “people’s mouths.” Beyond Meat believes (and I agree) that getting people to take a bite – and realize their product actually does taste just like chicken or beef – is the strongest way to change consumer perception. It will take time and money to do this, but they are seeing results every day, and that’s what really matters.

I walked away from my conversation with Ethan even more assured that this company, with their amazing product, a great vision, and a powerful group of investors, has tremendous potential to make it happen.

If they can’t, I’m not sure anyone can.

Most importantly, no matter where you stand on the issue of eating meat or replacing meat with a plant-based option, I urge you to consider one last thought.

If you had a choice to eat a product that uses significantly less land and water, had a smaller carbon footprint, and still delivered the same taste and texture of meat, in a healthier form,  would you try it?

The real question is, why not?