Why EVERYONE Should Consider Giving Up Meat 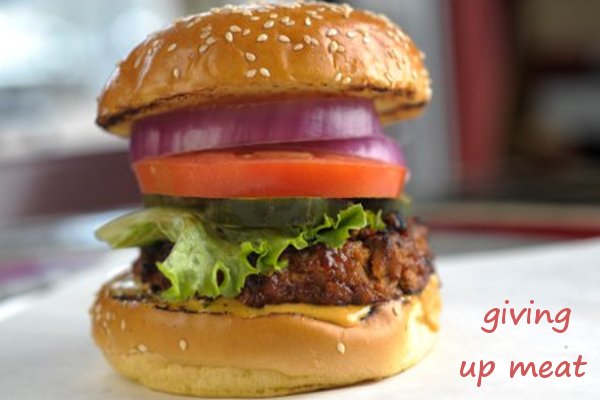 Can we, in fact, live healthy, vital lives without meat on our plates? It’s a question that I have tried to answer for people in my 25 (plus) years as a vegan.

49% of American eat meat daily. 80% of Americans eat meat four or more times a week on average. That’s a lot of meat; more than 200 pounds per person per year, to be exact. To give it up, even for a short time would be a challenge for most people. What would we eat?

More and more people want to know what’s in the food they are eating, so we might as well begin with those burgers and steaks sizzling on the grill on these balmy summer nights. What, exactly is in the meat you are eating? Is there more to your burger than meets the eye? Sadly, the answer is yes.

The majority of meat production is now completely dominated by factory farms: 95% of pigs, 78% of cattle and 99.9% of chickens to be precise. In a majority of instances, animals are fed completely un-natural diets, which is a big part of the problem with conventional burgers. See, it’s like this. When cows are grass-fed and eating a diet natural to them (they are vegans, ironically…) their meat contains less than 2 grams of saturated fat per ounce, while grain-fed, factory-farmed cattle contain just under 10 grams of saturated fat per ounce. That’s an astonishing difference and the main reason heart disease is associated with consumption of red meat. It’s no small thing to consider the ramifications of about 12 grams of saturated fat in a 6-ounce steak versus almost 60 grams.

Since the 1940’s, factory farms have employed the use of non-therapeutic antibiotics for healthy animals to help ensure they do not get sick. The animals live in un-naturally tight quarters; a sick one can infect the whole herd. So we dose them up before they become diseased rather than change the conditions in which they live…because that would cost money. These preventive drugs have another benefit, but again, hardly for the animal. It turns out that these antibiotics also make the animals fatter faster, which maximizes profits! So it’s a win-win for the factory farm ranchers. They fatten animals quickly and offset the disgusting unsanitary conditions in which these creatures are forced to subsist until slaughter, packed into feedlots and confined enclosures where an enormous amount of feces serves as the perfect breeding ground for bacteria and disease to spread from one animal to another. Sound delicious yet?

According to a report released by the Food and Drug Administration (FDA), 80% (or 28.8 million pounds) of the antibiotics sold in the United States are used to raise livestock and poultry. When a farmer can walk into a feed store and purchase a 100-pound bag of tetracycline, we need to worry about the quality of meat they are producing. We try ball players in open court for the use of performance-enhancing steroids, but yet we eat them on a daily basis in our burgers, steaks and ribs. Yup. Steroids, similar to the ones athletes use.

There are a variety of hormones produced by our bodies that are essential for normal development of healthy tissue, but synthetic steroid hormones used as pharmaceutical drugs have been found to affect cancer risk. For instance, lifetime exposure to the natural steroid hormone, estrogen is associated with an increased risk for breast cancer. As early as the 1930’s, farmers realized that cows injected with compounds drawn from cows’ pituitary glands produced more milk. However, it was not until the 1980’s that it became possible to harvest enough of this compound for large-scale use in animal production. In 1993, the FDA approved the use of rbGH (recombinant bovine growth hormone also known as bovine somatotropin, rbST) in dairy cattle. Current estimates by manufacturers of this hormone indicate that 30% of the cows in the U.S. may be treated with these hormones. We should be concerned about the hormones being added to our foods!

I am not sure what it will take for us to be more concerned about eating animal foods. How many beef recalls, egg recalls, salmonella outbreaks, e-coli contaminations, under-cover exposes of unsanitary practices in meat packing plants will it take before we realize that factory farming is polluting the planet, destroying our health and contributing to unspeakable cruelty. Have our brains gone to mush? Are we immune to suffering in ourselves and in others? Do we not care about our own health and the health of the planet? Do we just talk a good story and carry our little canvas bags to the store and breathe easier because we have done our part for ‘greening?’

How an animal was raised and what it was eating before it was slaughtered will become more and more important issues as we strive to make healthier choices for ourselves and the planet. Simply stated, if you’re not ready to be vegan, you’re not ready…yet.

I can wait for you to get here. But until you do, if you aren’t sure where your burger comes from, you might want to think twice about eating it.

As you watch the happy families in the Norman Rockwell-esque settings of Boston Market commercials and drool over the chicken, skin glistening surrounded by starchy side dishes, what you are really seeing is a hormone-laced toxic animal that was raised and slaughtered under the most un-Rockwell-esque conditions.

And here’s a great recipe to help you catch vegan fever!

This amazing salad has fooled some of the biggest chicken salad fans. It has all the ingredients that make a great chicken salad, except the bird! Served on bread or on a bed of lettuce, this salad makes a great meal.

This salad is great on a bed of fresh, crisp greens or served as a hearty sandwich.

* Note: You can buy baked tofu in natural foods stores. MY favorite brand is the locally produced ‘Fresh Tofu’ from Easton, PA. It’s perfect in this recipe.

**Note: You may also buy a non-dairy, vegan mayo in any natural food store.