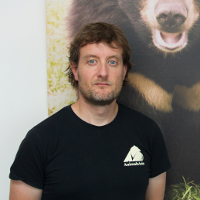 Based in the UK, Dave travels extensively to head up Animals Asia’s campaign to improve animal welfare at zoos and safari parks in China. He also works to increase general veterinary and animal welfare standards and promote animal-welfare education in schools and universities. After graduating in Environmental Science and Conservation Biology, Dave worked as an ecologist for a river restoration charity in England. In 2000, he embarked on a 12-month trip to Asia and South America carrying out zoo investigations and reporting on welfare conditions at local marketplaces. During that year he also spent three months working at a rehabilitation centre for animals rescued from the pet trade in Bolivia, helping to care for capuchin, spider, and howler monkeys, as well as pumas, jaguars, ocelots and Pampas cats. Disturbed by seeing moon bears for sale in markets in Vietnam and realising that they were being sold to bear bile farmers, Dave contacted Animals Asia after his return and started as Animals Asia’s UK Representative in January 2002. Dave lives with his wife Amanda, an animal artist, their daughter Elsie and son Wilfred and their rescued dogs Kandi, Dudley and Beany, plus rescued hens, guinea pigs, rabbits, rats and a gerbil. He also works as a volunteer animal welfare campaigner for farm animal welfare issues, and as volunteer political coordinator for the British Hen Welfare Trust.