Why We Can’t Give Up Fighting to Empty the Tanks 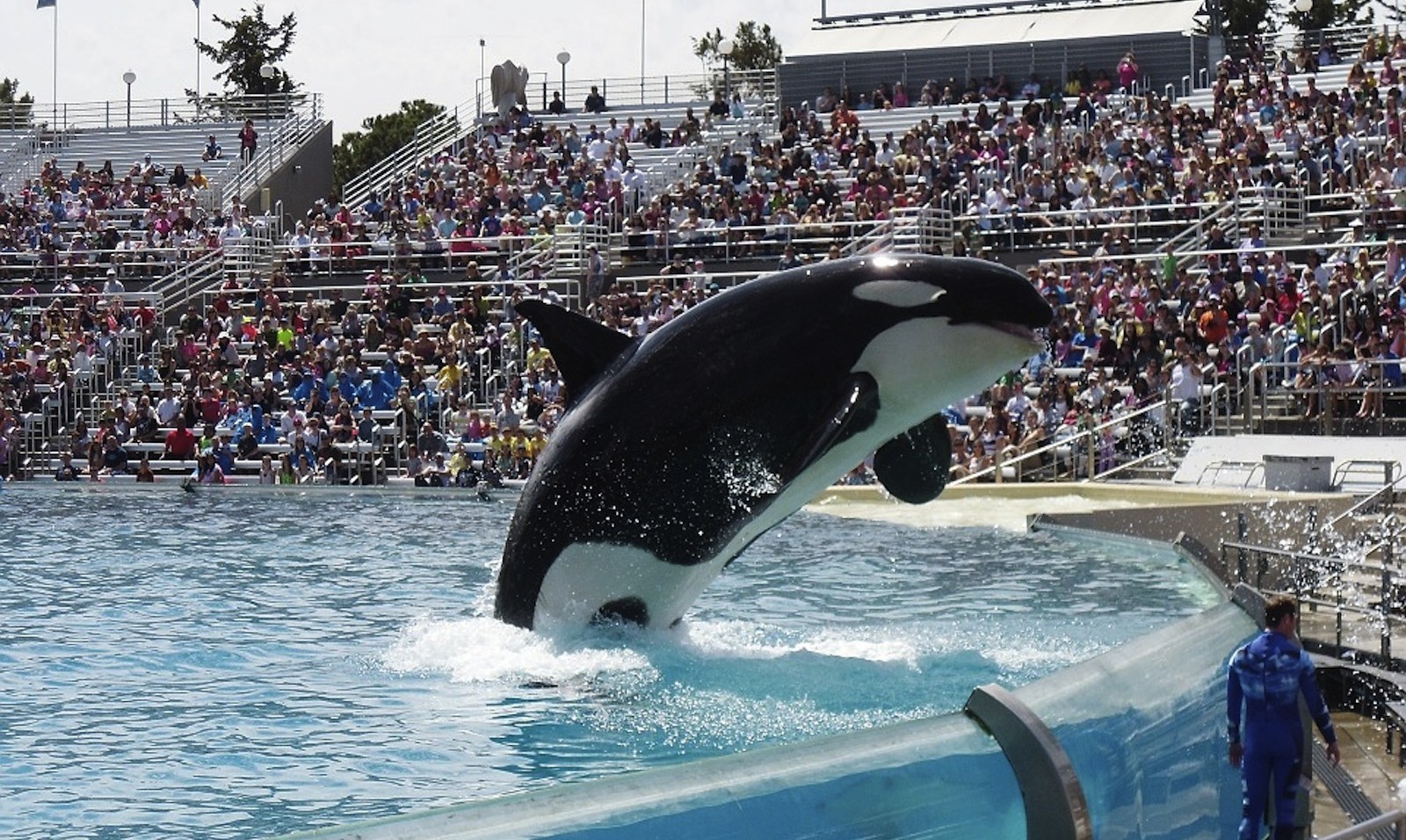 Earlier this year, SeaWorld announced that it would stop its captive killer whale breeding program. This involved artificially inseminating female whales — often when they were far too young — for them to produce offspring SeaWorld could then train to perform unnatural tricks to make profit from. While the end of this practice is good news, it doesn’t alleviate the suffering of the 23 whales — one of them pregnant — still living in captivity and condemned to spending the rest of their lives confined to barren concrete tanks. It also doesn’t do much for SeaWorld’s other prisoners either. Dolphins, sharks, turtles and several other species will continue to be trapped and abused by the company, in the name of entertainment and profit. 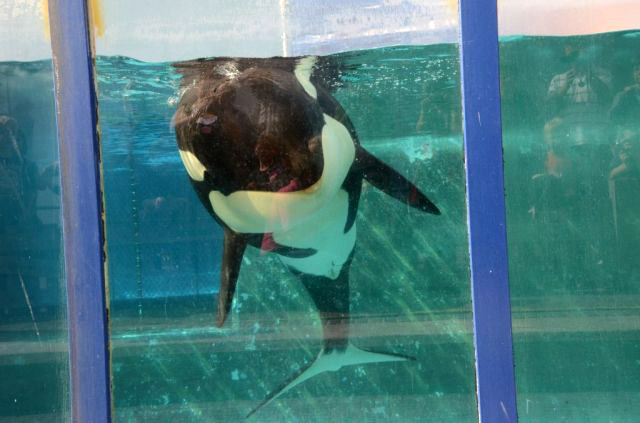 After the influential documentary film Blackfish exposed the mistreatment of orca whales at SeaWorld’s marine parks in 2013, attendance began to drop, with members of the public increasingly aware of how cruel and unacceptable it is to tear animals from the wild and keep them caged and confined their entire lives to exhibit them for monetary gain. Just this year, SeaWorld recorded a seven percent drop in attendance and a first-quarter adjusted net loss of $46.9 million in revenue. Meanwhile, visitor numbers increased in every other theme park in North America. Clearly the tide is turning against SeaWorld and its cruel ways.

Unfortunately, this isn’t yet enough. Animals will continue to suffer until SeaWorld shuts its doors for good. And this can only happen if people stop attending, promoting and funding the company’s inhumane parks and shows.

An Unbearable Life for Captive Animals

Imagine spending a week trapped in a barren enclosure as small as your bathtub. Doesn’t sound pleasant, does it? Now imagine being trapped there your entire life, hungry, sick, stressed and never to see your family again. This horrible scenario is the reality for animals at SeaWorld.

The suffering of orcas, in particular, has been well documented. Apart from being torn from their mothers and stolen from the wild, never to see their families again, or artificially bred in tanks so that they never even experience the open ocean, these whales suffer a tremendous amount of stress, pain and abuse. They are kept hungry so that they respond to trainers’ directives to perform unnatural tricks for food.

Most animals at SeaWorld do not die of old age. Orcas in particular can live up to 60-100 years in the wild, however captive individuals survive an average of just 12 years. And along with being short, their lives are anything but sweet. While these animals would swim up to 100 miles a day in the wild and dive to depths of 200 feet, they are confined to tanks just a fraction of that size, causing them to lie listlessly on the surface, a behavior never seen in wild orcas. Another sign of severe trauma is the collapse of males’ dorsal fins. In the wild this occurs in only one percent of them, but at SeaWorld this has happened to all male individuals.

Moreover, orcas at SeaWorld gnaw on the concrete and metal walls of their tanks out of boredom, stress and sheer frustration. This compulsive behavior causes severe and painful damage to their mouths, with their teeth becoming chipped and worn down, exposing pulp, and resulting in infections that can quickly become life-threatening. 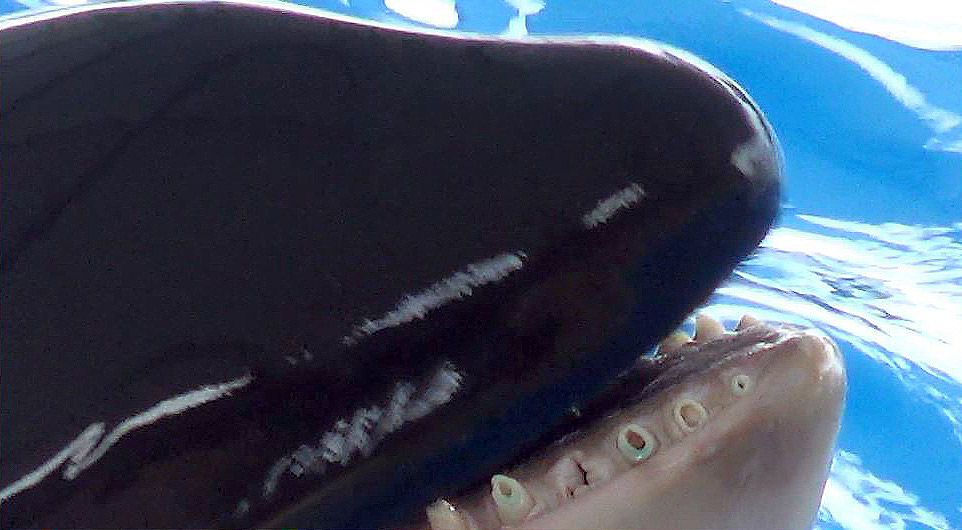 Aside from broken teeth, captivity causes a whole range of severe illnesses and afflictions, from painful sunburns — due to the orcas having no shelter from the sun — to severe infections and pneumonia. Indeed, SeaWorld most famous orca, Tillikum, who now spend his days in a tiny tank containing just 0.0001 percent of the quantity of water that a wild orca would travel through in a single day, is now dying of a lung infection.

As a result of being kept in such close confinement with others, the hungry, stressed and frustrated orcas can quickly turn on each other, with bullied individuals suffering bite and rake marks, and unimaginable distress. One particular SeaWorld orca named Morgan — currently “on loan” to Loro Parque in Tenerife — has been filmed repeatedly beaching herself during shows in an attempt to escape the aggression of her tank mates. In one video she is seen bleeding and covered in deep teeth marks. Another orca kept captive at the same park has also exhibited similar behavior. Orcas rarely fight in the wild, as they have the space the avoid each other, but the cramped quarters of marine parks make bullying between the animals a common occurrence. 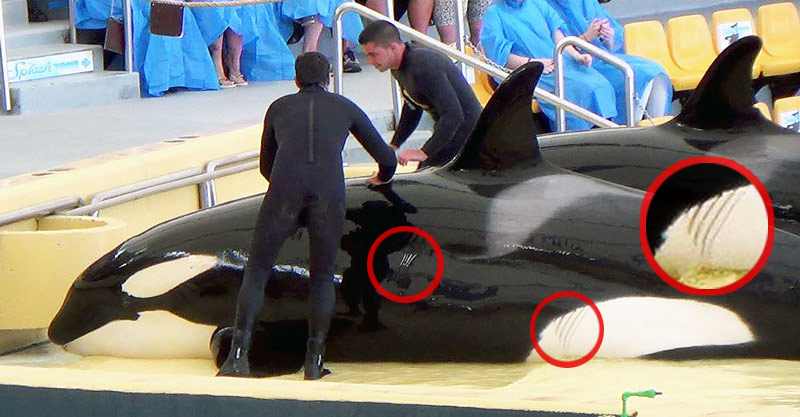 Whales have also been seen thrashing against the sides of their tanks, stridently calling out and smashing into gates due to the stress of being confined in such small spaces. The extreme stress these animals are subjected to also causes self-mutilation, unusual diseases and even suicide attempts.

Orcas aren’t the only animals suffering extreme pain and distress while kept captive in SeaWorld horrible conditions. Beluga whales, dolphins, sharks, penguins, seals and many other animals are kept confined in cramped spaces and unnatural settings, simply to be displayed to clueless visitors.

After decades of protest and a severe backlash following the groundbreaking Blackfish documentary, SeaWorld’s promise to stop breeding captive orcas is a step in the right direction, but it is far from being enough. Remaining animals deserve to be set free, either back to their ocean homes for those for whom this is possible, or to sanctuaries and sea pens — large areas of the ocean, such as coves, that are netted off to ensure the survival of captive-bred animals who have no experience of the wild.

How You Can Help Orcas and Other Prisoners at SeaWorld

Some positive progress has been achieved, but we must continue to fight for the animals languishing in captivity at SeaWorld and elsewhere. Although attendance to marine parks is declining in North America and Europe, it is unfortunately on the rise in certain parts of Asia. Thankfully, the #Emptythetanks movement is growing, and there are a number of other ways you can help.

If you haven’t already, watch Blackfish and encourage others to watch it too. The best way to help is to boycott all facilities that keep animals captive for profit, to spread this information to encourage others to do the same and to keep campaigning for the release of animals still being held captive. This can be done by contacting your elected representatives and asking them to stand up against animal captivity.

Sign this petition urging SeaWorld to stop using animals and send them to sea sanctuaries. Additionally, check out PETA’s 5 Ways to Sink SeaWorld Online. These include urging companies to stop promoting SeaWorld and using social media to express your condemnation of the company’s abusive practices.