Entire Village of Abandoned, Starving Animals Gets Saved Thanks to Dedicated Rescuers 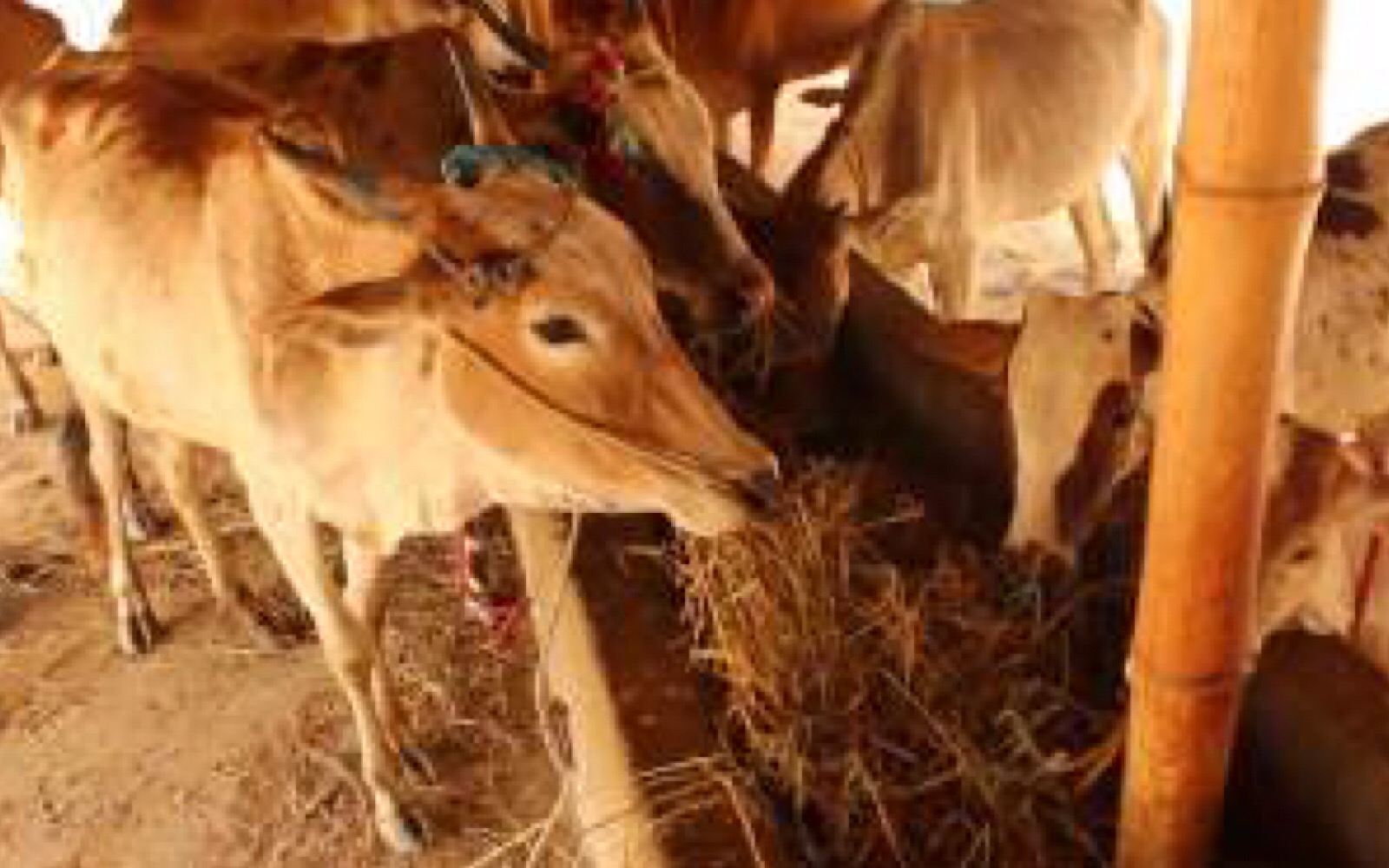 Some of the principal people from PETA-India, FIAPO, and others have showered us with thanks and blessings! I got a call on Wednesday, July 12, 2017, involving creatures that needed rescuing over 45 miles from here (Tiruvannamalai) in a small village called Mathura Arasanoor.

Five days before, a local political figure, had been killed by six men from that village. (India, especially some of the rural areas, can sometimes be driven by blind passions, almost not understandable. But let me insert here that I have spent 26 years of my life in this country. And I love it, I love the people, and in my heart, it is my country.) Well, anyway, the six were all related. The families fled for their lives, abandoning their animals, perhaps never to return. “Sympathizers” of the murdered political figure burned down the houses of the families.

Further, under threat of death, the sympathizers warned the six remaining households not to feed or care for the abandoned animals. 85 of them. And so…they were slowly starving — Goats. Cows. Calves. Bullocks. Sheep. Pigs.

Word reached us five days after the happening. To confirm the veracity of the story, I called a local news reporter who’d gone in to do the story the day before. It was true, and five animals had already died. With that confirmation, Dr.Raja and I then approached the Collector (like a regional governor), who turned out to have some familiarity with the situation. By 8 pm an order was issued for the police to impound the abandoned animals, who were starving and in danger of dying. And the order further specified that our Shelter (Arunachala Animal Sanctuary & Rescue Shelter) be used to do the rescue and care for them.

The animals were emaciated and in dire need of help. 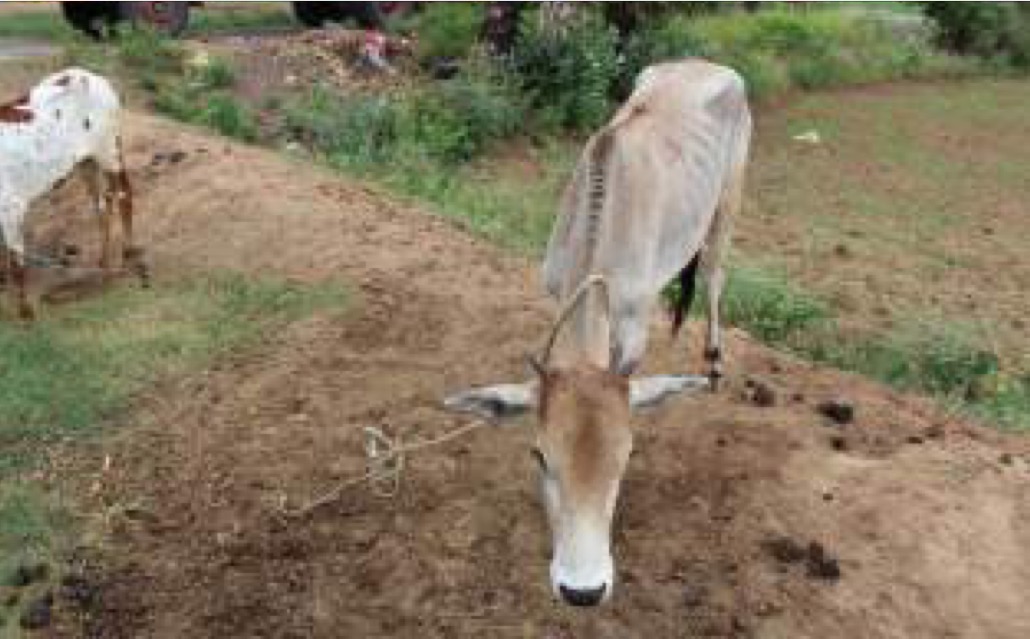 My Director of Operations, Vishwa, did not hear of this until 7 pm (just before the order was issued). I told him what was unfolding, and that time was of the essence. He said he’d be ready to move by 8 am in the morning.

And unbelievably, early Thursday morning, we were set to move. Four very large lorries with drivers, and a small sized one with three cages for the pigs. And Vishwa, of course, to hands-on orchestrate the rescue, plus six carefully selected men to catch and load (included were Pandi, Venkatesh, and Prem Kumar from our staff, and myself, to oversee the operation). Dr. Raja, our head veterinarian doctor, joined to ascertain the state of the creatures, to care for those needing immediate treatment, and to articulate any important medical precautions in the operation.

Our emergency “task force” first went to the principal government office in Chengam, the main town 35 miles from the village. Passions were high, and it was a dangerous, potentially explosive situation. For protection, the head government official there assembled a contingent of half dozen police (including a sub-inspector who was head of the Station). To observe, he also assembled seven influential government officials from various departments.

We then headed towards the village. The trip was partly through hilly country with potholes and torn-up roads. It took almost two hours. It was a beautiful village. There’s a general drought in most parts of Tamil Nadu, and everything is dried up. But there’s a large dam and reservoir nearby, and it was surrounded by distant high hills. It was beautifully green, something I’d not seen for several months. (We picked up the vice-president of the village on the way. He was afraid and had not gone there since the murder. There were seven families that had stayed, but they were under threat of death to not help the abandoned animals.)

Before proceeding…After they were all gathered and loaded, let me tell you that 56 goats, two sheep, four pigs (including a large, and as we learned, belligerent male close to 300 lbs), 17 cows/calves/bulls, and six large bullocks were rescued.

They were not in good shape – it was most clearly seen in the cows and bullocks, there were, however, none requiring immediate treatment.

The loading process took a great deal of time, patience, and effort. 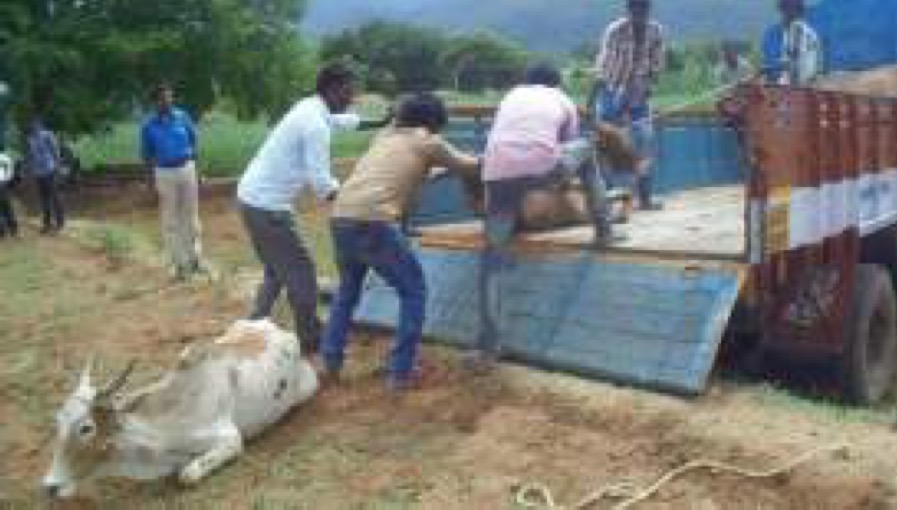 The catching and loading took four hours of intense effort. I was humbled by how intensely, and professionally, our people moved, without a break for four continuous hours. I was so proud of Vishwa orchestrating, and our three staff that put out such strong energy without fear. There were many, many places where they could have been badly hurt, especially in the loading of the cows, bulls, and bullocks.

First, the goats were loaded. They were put into two large lorries. They were in contained areas, meaning they didn’t have to be caught and gathered. They didn’t weigh much, and since they were gentle creatures, it went rather fast.

Next, the cows, calves, bulls, and bullocks were loaded. They went into the two remaining large lorries. But first they had to be gathered, lead ropes put on, and tethered which took at least an hour.

Then the difficult part — LOADING. Most did not get on the lorries, willingly. They had to be pushed and lifted. It was intense. Especially the six large bullocks. The calves were not a problem. They simply were lifted and put on. This is a short paragraph, but let me tell you it was fraught with unbelievable effort requiring almost superhuman strength. And it was dangerous. Thank God there were no major injuries.

And last loaded, the four pigs. Then with some difficulty, the four pigs were caught, put in cages, and loaded onto the smaller lorry. Two of the younger ones were fast and ran all over the place. It took a half dozen people a half hour to catch them. The smaller adult posed no special problems. It was getting the large male into the cage that was very intense. And then (remember he weighs 300 lbs — 135 kg) lifting and loading the cage onto the lorry. Pigs are intelligent and affectionate creatures, but they can become seriously aggressive. And a pig bite is very, very heavy. Though Vishwa never says anything negative, I know that he was a little concerned at how it might unfold.

On the trip back, we called ahead to have ample water available for the cows. It was after 7 pm and dark when they got there. It took an hour to unload the 23 animals from the lorries. And even in the dark, the young calves found their moms in a few minutes.

You’d better believe they were thirsty and hungry! They were given dry grass, water, and rice bran before being settled in. The following morning, oil cakes were added, and a second kind of rice bran. On the following day, fresh green grass was added. (Because of the drought, Vishwa couldn’t get the fresh grass locally.) Om Namah Shivaya.

It was around 9 pm, and completely dark when Vishwa headed for the goats to get them “tucked in” for the night.

The goats are seen here enjoying fresh leaves after being rescued. 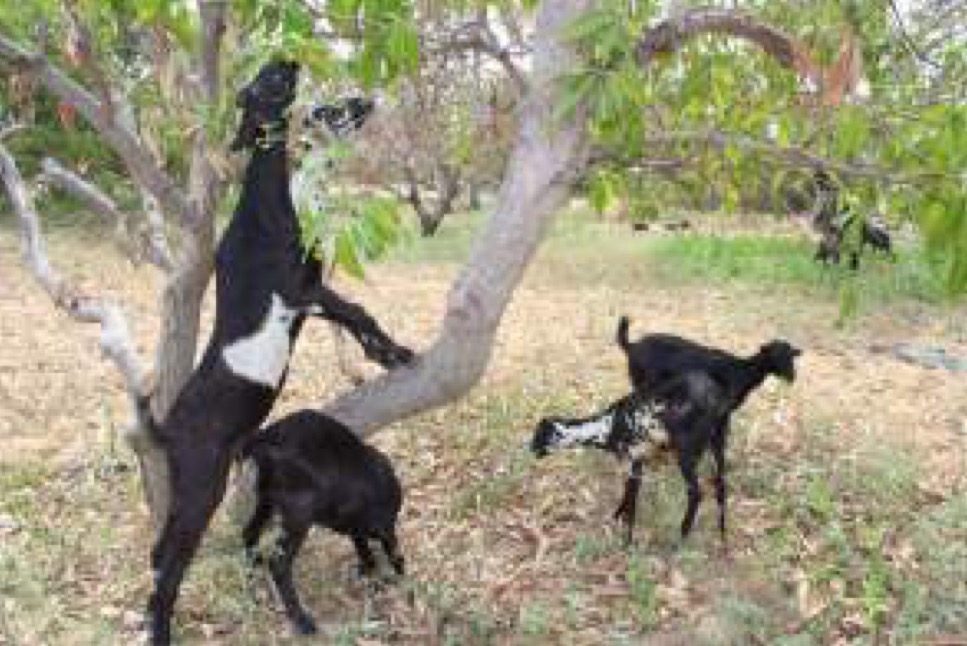 In the meantime, the goats had been unloaded in their place 15 miles away. There were five caretakers there. They had been given water when they arrived, but nothing else. It was too late to arrange anything. The caretakers were encircling them, keeping them together, waiting for Vishwa who showed up around 10 pm. He set up a temporary net enclosure, and the goats were settled in for the night. In the morning he built a “permanent” net enclosure, reduced the caretakers to three, and the sweeties (they really are gentle, vulnerable creatures) were taken for extended foraging (9 am thru 5 pm), which they loved. The following day, oil cakes and peanut plants, both of which are favorites, were added to their diet.

Everything went well except for the pigs. Their lorry reached the shelter at 6:30 pm. They were left in the cages to be picked up at 8:30 pm by a person who was going to drive them to a good place. He didn’t show. They stayed in the cages overnight.

Pigs are extremely intelligent, sensitive creatures, capable of forming close bonds with humans. Though they’d not been fed for six days, and the people caring for them were gone, they surely didn’t know they were in deep trouble. For them, when we showed up, we were aggressive strangers who roughly put them in three cages. Having lost everything they’d ever known, for three hours they were driven on a lorry. And the cages were small.

The staff tried to mitigate their suffering. They took water and two grains that had been prepared for them, but nothing else. They were aggressive and so traumatized that they wanted no one near them.

Vishwa tried all the next day to find a good place for the pigs, but couldn’t. I tried, unsuccessfully. I did make contact with a good lady who had a half acre near Chennai, a four-hour ride away, where the pigs would run free. But the males had to be sterilized, which we couldn’t do because the owners have a right to reclaim them for one month.

Later that day, I said to Vishwa that if the best we could do is get a pen for them to be cared for, then I trust no one more than us. We agreed that the thought of them staying in the cramped cages for another night was almost unthinkable. So he set out to gather materials needed to build a 12 by 20-foot cage. We spoke at 9:30 pm. It would be set up within an hour.

But another major problem — a “biggie”. They couldn’t get them through the front gate. Vishwa had to arrange to lift the cages over our six-foot wall encircling the shelter, and the large male weighed 300 lbs. At that point, I felt we just couldn’t do it, and it would have to wait for morning. But he said, “Sir, we can do it”…6:30 am the next morning I went to see what had happened. And there, in a 12 by 20-foot pen, were the four pigs. This is now ten days since the rescue, and their pain has melted away. They have been fed “piggie delicacies” along with their regular fare…and are feeling good. (A note to Vishwa. Don’t know if he’ll ever see it…”For everything you do. For your beautiful heart. I place my head at your feet.”)

The animals are eating well, putting on weight, and regaining strength now thanks to kind rescuers.

Eight days after the rescue, it feels so good to see the profound change in the state of all the cowshed creatures — physically and emotionally.

Their care regimen is: 24 hours a day they have dry grass and water. Twice a day, 10 am and 5 pm, they get oil cakes, two kinds of bran, and fresh green grass. The shed is cleaned every two hours.

For two hours every morning, they’re taken to a huge field and are allowed to run free. There are two that try to run away. They are kept on 30-foot ropes and the caretakers are very good. They have a lot of room in the shed. The vibration of the place is pure. And it’s clear that the precious ones are content.

To learn more about the incredible rescue behind this operation, check out the Arunachala Sanctuary website.