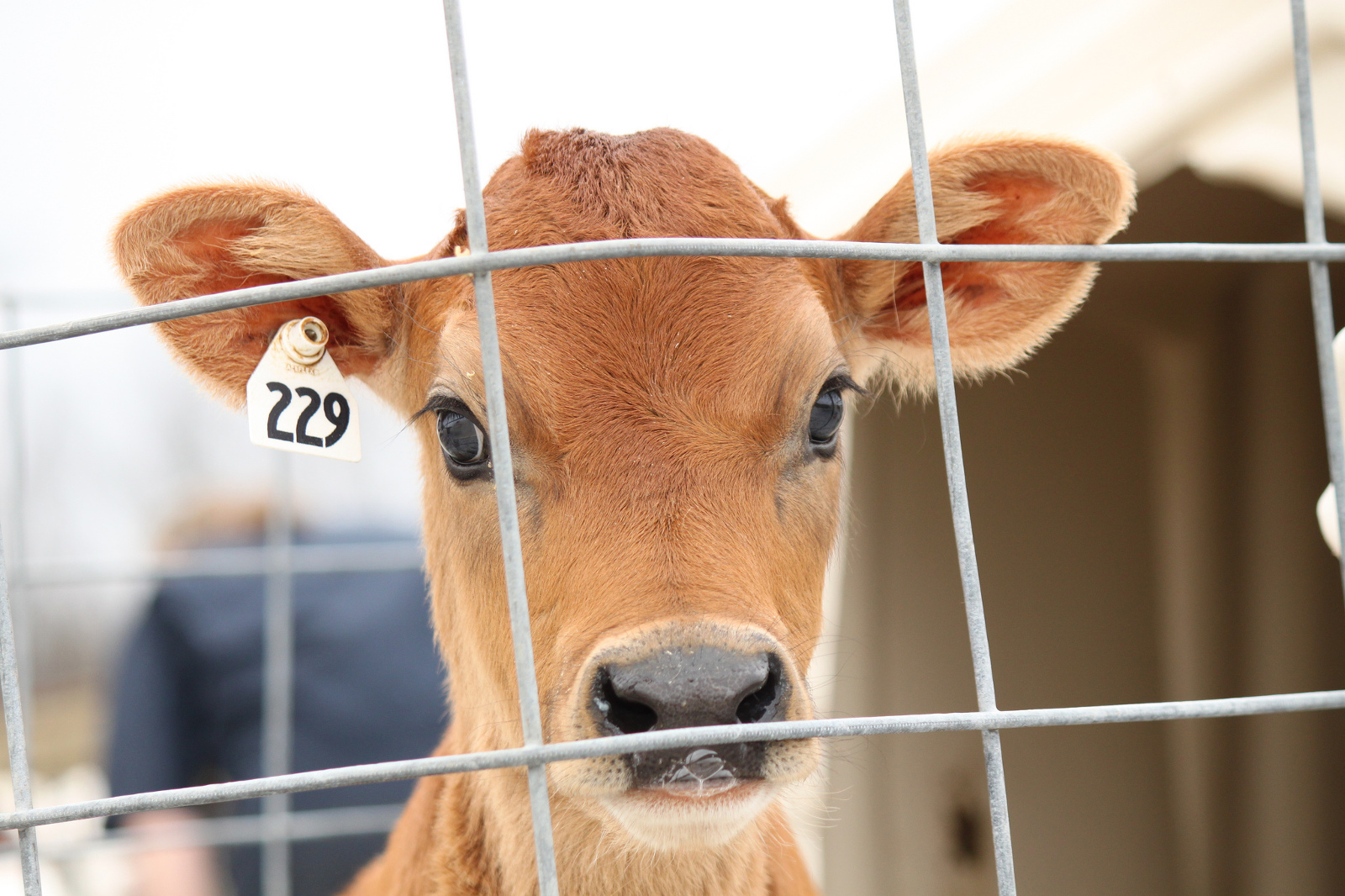 Throughout the world, there are more than six billion consumers of milk and milk products. That’s a hefty demand, right? So, where do you think your milk comes from?

Unfortunately, many people believe cows are willingly milked by delicate hands in lush, green pastures. Okay, this may be true on the odd occasion, yet intensive dairy factory farming methods have escalated in order to meet the high demand of these six billion consumers. Trying to do this while minimizing operating costs, sadly, often comes at the expense of both cows and calves in the industry.

In order for a cow to produce milk, she needs to become pregnant. Because a dairy cow will have to be continually impregnated in her lifetime, and farmers don’t have time for nature to “run its course,” the industry standard is to use “rape-racks,” to artificially inseminate cows. (Yes, that’s the industry term, not our term.)

Once the cow gives birth, the baby is taken from her just hours afterward, an immensely stressful affair for both cow and calf. As if the trauma of separation wasn’t enough, cows are then hooked up to painful milking machines and fed antibiotics and hormones in order to produce unnatural amounts of milk while fighting off diseases attributable to squalid factory conditions. The cow will be forced to constantly repeat this horrific cycle until she is too old to bare calves or her milk runs dry.

Most female calves born into this industry share their mothers’ fate. Male calves are either reared for veal meat, spending their short lives confined in tiny, cramped crates designed to prohibit exercise and muscle growth, or sent to a feedlot to be raised for meat.

Providing that profit exists, so will oppression. Luckily, some of these vulnerable dairy cows find happiness. Here are five stories of rescued cows and calves that will be sure to moo-ve you! Will you rethink dairy?

In 2013, a dairy farm in Taree, New South Wales advertised several male calves for sale on a classified website for only $20. When animal advocates arrived at the dairy farm to purchase and rescue the calves, only one calf remained: Woody. Unsurprisingly, Woody had been separated from his mother, denied shelter, comfort and contact and had been poorly fed from a flimsy bucket. He suffered from diarrhea, a fever and was unable to stand. Luckily, under the care and supervision of Signal Hill Sanctuary, Woody made a full recovery. He now spends his days grazing and relaxing, as a proper cow should. At the sanctuary, Woody is free from the threat of abuse or exploitation and gets to enjoy the company of other animals. 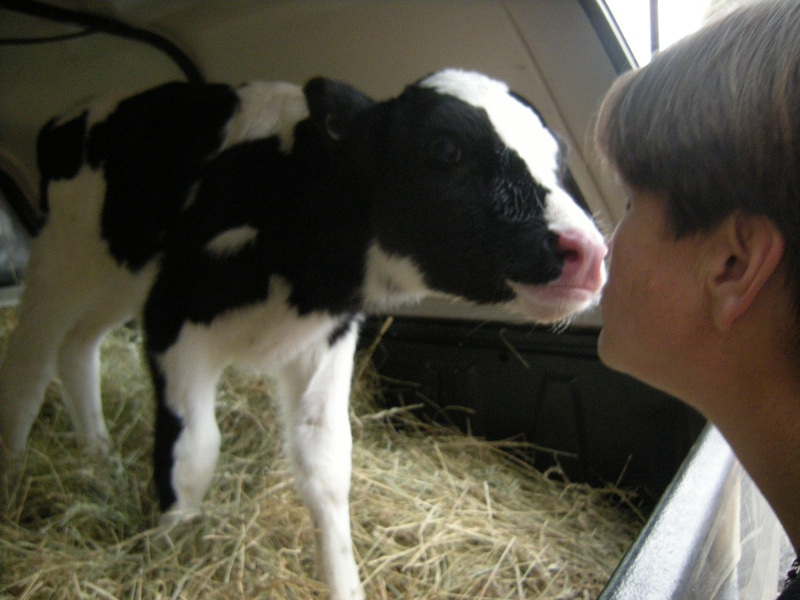 Generally, female dairy cows are sent to slaughter when they reach an age of four. As if four long years of repeat insemination, pregnancy, birth and milking wasn’t ruthless enough, Sweety endured the dairy production line for a grueling eight years. This blind cow was imprisoned on a farm in Canada inside a dismal industrial building on concrete floors with no access to the outdoors. Her offspring were seized, never to be seen again and were sold as veal or cheap beef. A foot infection and the birth of twins in 2014 rendered Sweety spent in the eyes of her factory farmer, so she was destined for slaughter. But thankfully Rose, manager of Refuge RR, relentlessly pleaded with the dairy farmer to spare the drained dairy cow. Shortly after, Farm Sanctuary became Sweety’s happy home. She has now formed a close bond with Tricia, another blind dairy cow rescued in 2008, and relishes in nuzzling and nestling in an abundance of hay and thick bedding.

Maribeth was separated from her mother shortly after birth. She was born with a leg injury and was incredibly weak. Despite this, she had to wait for much needed medical care because the dairy farm saw little value in her life. In 2013, because of her ill-health, the farm branded Maribeth an unsuitable candidate for the physical strains of milking, she would instead be sold as veal.

To her relief, a concerned acquaintance of the farm convinced the dairy manager to hand over the young calf. Immediately, Woodstock Farm Animal Sanctuary were called, who later transported Maribeth to Cornell Veterinary Hospital. Their medical examinations revealed that the poor calf’s joints were suffering from a systemic bacterial infection. But Maribeth is one tough cookie. Following three months of care at the sanctuary, X-rays revealed significant bone and cartilage regrowth. Maribeth now rests easy knowing that she can frolic and graze blissfully in the delights of a lush, green field.

Like millions of other female cows, Lindy Lou experienced first hand the exhausting cycling process of artificial insemination, separation and milking. She was denied the simple pleasure of caring for her offspring, and her calves were snatched from her on several occasions. Linda Lou was destined to produce milk and existed as profit alone. One the other hand, because Carlin, a male calf, was incapable of producing milk, dairy farmers branded him waste. Fortunately, Manning River Farm Animal Sanctuary were there to offer these two a safe haven. They now revel in the joys of love and companionship and have bonded as if they were long-lost mother and son.

In 2013, Farm Sanctuary’s Emergency Rescue Team found Ted and Leo tethered in separate, congested, feces-ridden stalls on a small dairy farm in New York. They had been confined in these severe conditions all their lives and were underweight, lethargic, anemic, bloated and weak. In fact, Teds’ head and horn size suggested that he was approximately seven months old, yet, having been severely malnourished, he appeared to be less than half his actual age. But Farm Sanctuary were there to give these bull calves a break and they were taken in and nursed back to health. Having never stepped outside or tasted fresh grass, both Ted and Leo began bucking with joy when they entered the pasture. 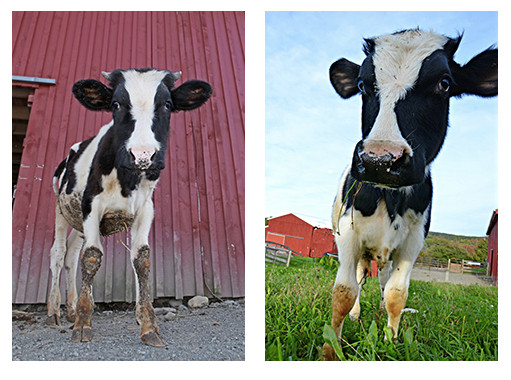 There are billions of cows living in the dairy industry who will never get the happy endings that these lucky cows have been given, all because of our love for cheese and milk.

Luckily, there is a very easy way you can halt the obscenities of intensive dairy farming. Simply vote with your stomach.

Supermarkets are stocked with so many milk-product alternatives. Plus there are tons of easy recipes available right here to help you make your own delicious non-dairy cheeses. The possibilities are endless once you start looking for an alternative to dairy. You might just think of ditching dairy as giving up milk and cheese, but you could really be giving cows and calves a second chance at life.