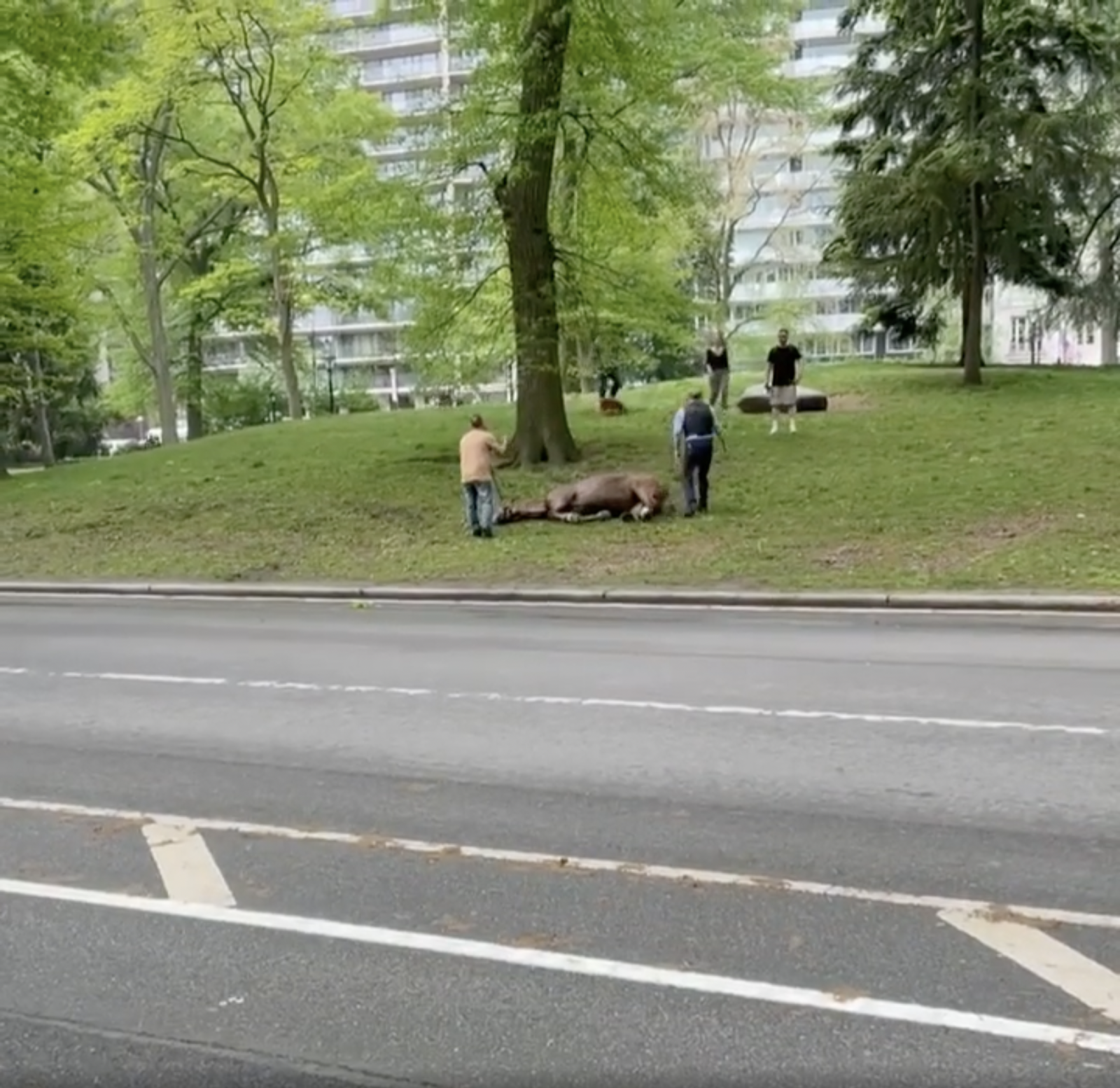 In a heartbreaking video shared on Facebook, carriage drivers in NYC are seen violently mishandling a collapsed horse named Luciana.

According to the Facebook post, witnesses say that they could hear Luciana screaming in distress as the carriage drivers were kicking her, trying to drag her by the tail, and pulling on her face for almost an hour with no veterinarian present.

Amid public outrage, an emergency protest was organized where NYCLASS and PETA exposed the carriage industry-paid veterinarian, Dr. Camilo Sierra. According to the carriage horse industry representatives, Luciana was examined by Dr. Sierra, who has his veterinary license under a two-year “suspended stay” by the state. Dr. Sierra has a “long and disturbing history of unlawful and harmful behavior to horses at New York racetracks, which includes the falsifying of health reports and improperly drugging of horses,” according to NYCLASS.

NYCLASS also pointed out that even the State Gaming Commission has said that Dr. Sierra committed “an improper, corrupt and fraud act and practice in relation to racing, and committed and attempted to commit fraud.”

”Luciana was brand new to the city and should not be subjected to further danger and abuse. We call on her owners to release her to a sanctuary and we’ll offer support to make that happen,” said Edita Birnkrant, Executive Director of NYCLASS. “It’s clear the entire horse carriage industry is corrupt from top to bottom. Instead of relying on the word of shady vets or animal abuse apologists, it’s time for the City Council and Mayor to follow the example of other modern cities in the world – including Chicago and Melbourne, Australia – and remove horse carriages from the streets of New York without delay.”

Unfortunately, this is far from the first time that these exhausted prisoners for profit have collapsed and been treated horribly. In March, a horse in Central Park stumbled multiple times before finally collapsing on the pavement and multiple men continued to try to make the animal stand up.

This carriage horse from Clinton Park Stables is seen stumbling and unable to straighten their back legs in Central Park earlier today.

After years of doing nothing for carriage horses, will @NYCCouncil finally protect them? cc: @CoreyinNYC pic.twitter.com/EzSgvxoCkb

Eventually, the men trussed the horse’s legs together and hauled it into a trailer. Only hours later, the 12-year-old mare named Aisha was euthanized.

💔This brutal video shows carriage drivers purposely blowing smoke into downed carriage horse Aisha’s face and her flipping over in terror. There is 17 minutes more of footage like this. Aisha was brutalized. Now she’s dead. Animal cruelty charges need to be filed. @NYPDPaws pic.twitter.com/JZhsWuQ4ML

Horse-drawn carriages and horse rides are not quaint and romantic! These poor horses are subject to walking for hours on end in sometimes extreme weather without adequate breaks. We need to work toward banning carriage rides and protecting these animals from being exploited!