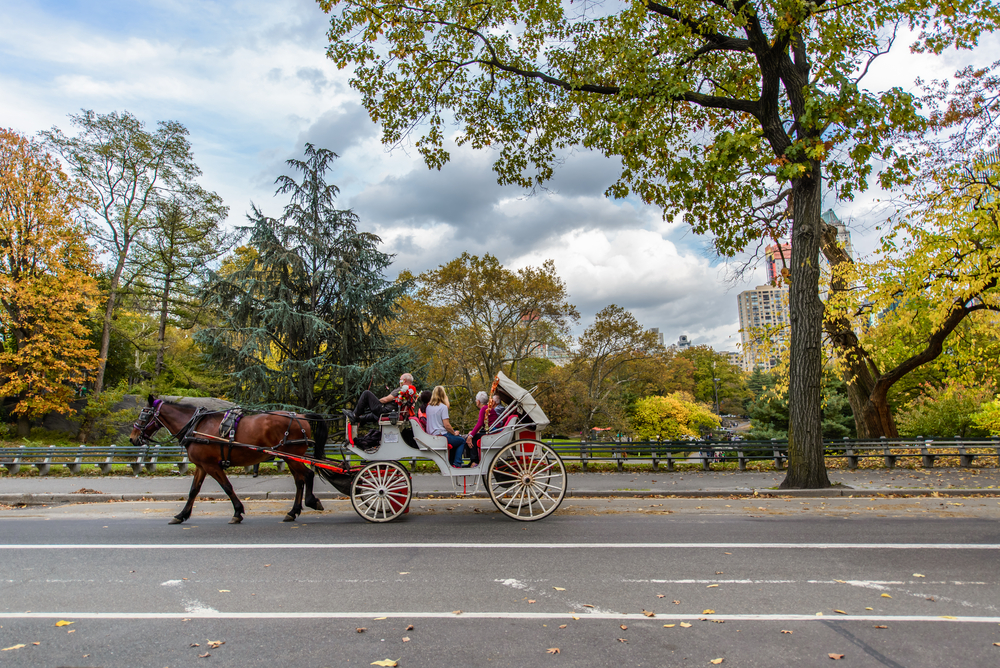 “Instead of calling a qualified vet, to help this horse, several carriage drivers tied him up with ropes, shoved, pulled him into a trailer and they took him back to the stable,” according to Edita Birnkrant, executive director of NYCLASS (New Yorkers for Clean, Livable, and Safe Streets).

Activists gathered for a protest in the park, according to a tweet from PETA. The protest included a die-in with protesters holding signs that said, “How many more horses have to suffer and die? End this animal abuse!”

💔Massive Central Park NYCLASS DIE-IN to mourn the horse who died so brutally yesterday, and the countless others who will suffer & die as long as horses are forced to pull carriages on NYC streets. “If you love horses don’t take a ride, drivers work them till they die!” pic.twitter.com/xCHb8lIpIU

Watch the video of the horse collapsing, below:

This carriage horse from Clinton Park Stables is seen stumbling and unable to straighten their back legs in Central Park earlier today.

After years of doing nothing for carriage horses, will @NYCCouncil finally protect them? cc: @CoreyinNYC pic.twitter.com/EzSgvxoCkb

Marty Irby, executive director of Animal Wellness Action said of the incident in an emailed statement, “Mayor DeBlasio should instruct the NYPD to swiftly investigate this case. At a minimum, the driver’s license should be immediately suspended until an investigation has been completed. Working horses on slippery asphalt for long periods of time without the proper care and nourishment is inexcusable. The animal protection movement in America ignited 150 years ago over the issue of carriage horse abuse, yet the City of New York continues to allow it to persist today. The American people will no longer tolerate these incidents in our modern-day society – this isn’t 1820, it’s 2020.”

New York City Mayor Bill DeBlasio promised reform in a tweet, “The video of a horse collapsing and dying in Central Park yesterday is painful and says so much about a persistent problem. We’ve made real progress in animal welfare but we must go further. The NYPD’s Animal Cruelty Investigation Squad is on the case and WILL get answers.”

NYPD Detective Annette Shelton told CNN, “The NYPD’s Animal Cruelty Investigation Squad is investigating this incident and we are awaiting the results of the necropsy.”

Sign this petition to demand an end to the cruel horse carriage industry!

Read more about horse-drawn carriages in One Green Planet: