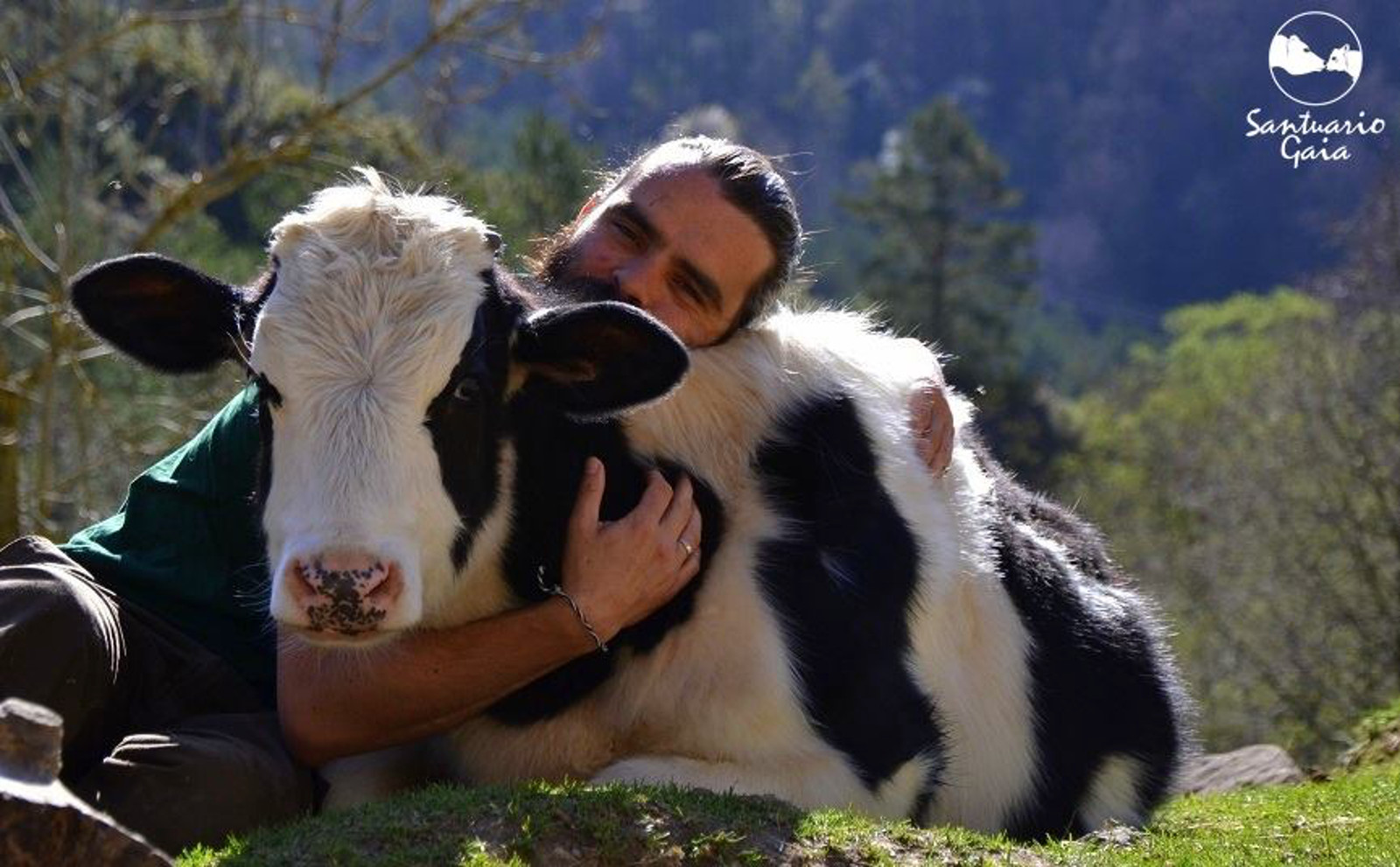 As Green Monsters, when we see pigs or cows, our first reaction would probably be to reach out and pet them just as we would our dog or cat, but this is not the usual response that most people have to farm animals. Seeing farm animals as “food,” many people prefer not to acknowledge the fact that these animals share many similarities with the domestic animals we love and cherish.

As a result, animals like chickens, cows, and pigs continue to be treated as commodities and are forced to endure lives in factory farms. Nearly two out of three farm animals worldwide are raised in factory farms where they will be subjected to extreme confinement, filth, pain and fear for the duration of their lives. This is understandably upsetting for people who discover what really happens to animals to make them appear as food in the grocery store, but if we don’t face the truth, we can never hope to change.

Gaia Farm Animal Sanctuary, located in Ogessa, Spain, is working to change the way we see farm animals by showing the world the unique and wonderful personalities of the many animals they care for. Spain is known for having a huge population of meat-lovers, so this sanctuary is playing a vital role in helping to change cultural views about farm animals. There are only a handful of farm animal sanctuaries in Spain, and with over 100,000 followers, Gaia is one of the most influential sanctuaries in the country. However, due to extenuating circumstances, this special sanctuary is being forced to relocate and desperately needs our help!

Palma the Pig Who Started it All

The founders of Gaia Farm Animal Sanctuary, Ismael López and Coque Fernández, always knew they wanted to start a sanctuary for farmed animals, but it wasn’t until they rescued Palma, the Vietnamese pig, that they realized they needed to make this place a reality.

Before she was rescued, Palma was living in deplorable conditions and mere days after she was taken in by Lopéz and Fernández, she gave birth to six little piglets. The pair now had seven pigs on their hands and no space to properly raise and care for the animals. Not wanted to split up this new little family, they set out to build what is now Gaia Sanctuary and opened their doors for rescues in 2012. 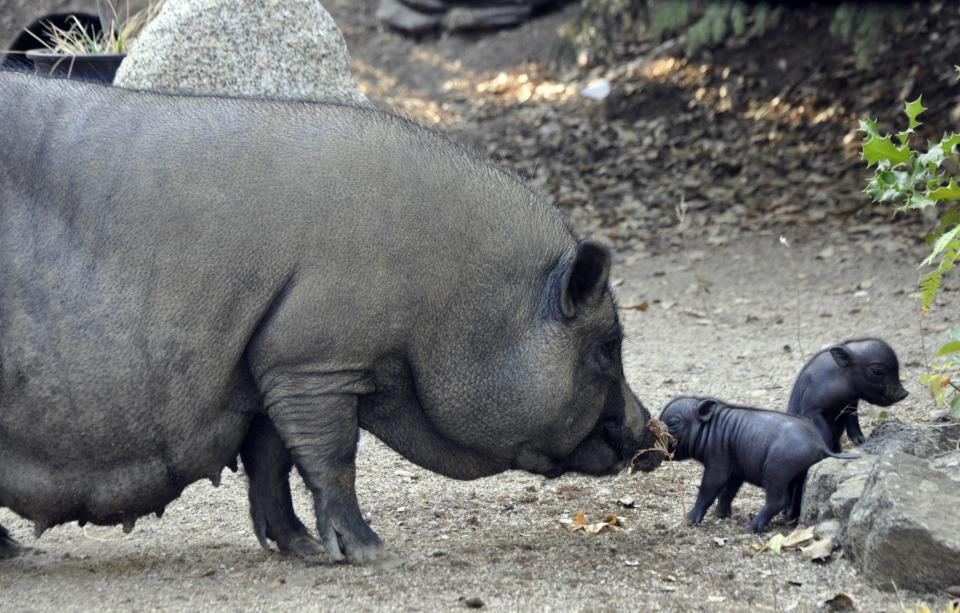 The sanctuary is located in wooded region of Spain that is surrounded by mountains and fresh streams, the perfect location to give previously farmed animals a second chance at life. 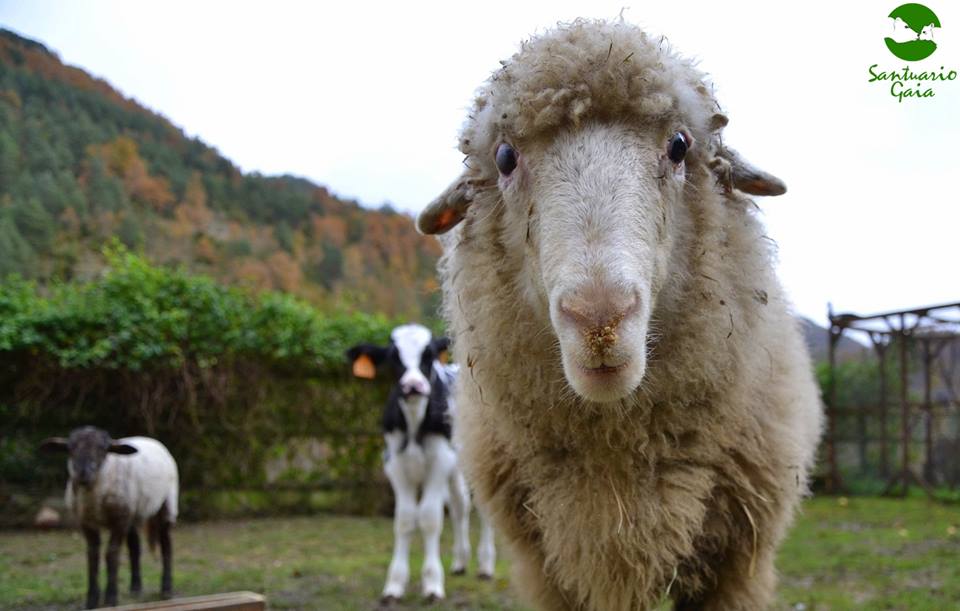 “The peacefulness of the place is ideal for the nonhumans animals who arrive here, most of them in a terrible state, both physical and emotional.” Lopéz and Fernández explain, “It helps them recover faster and provides them with a home to live in peace and harmony.” 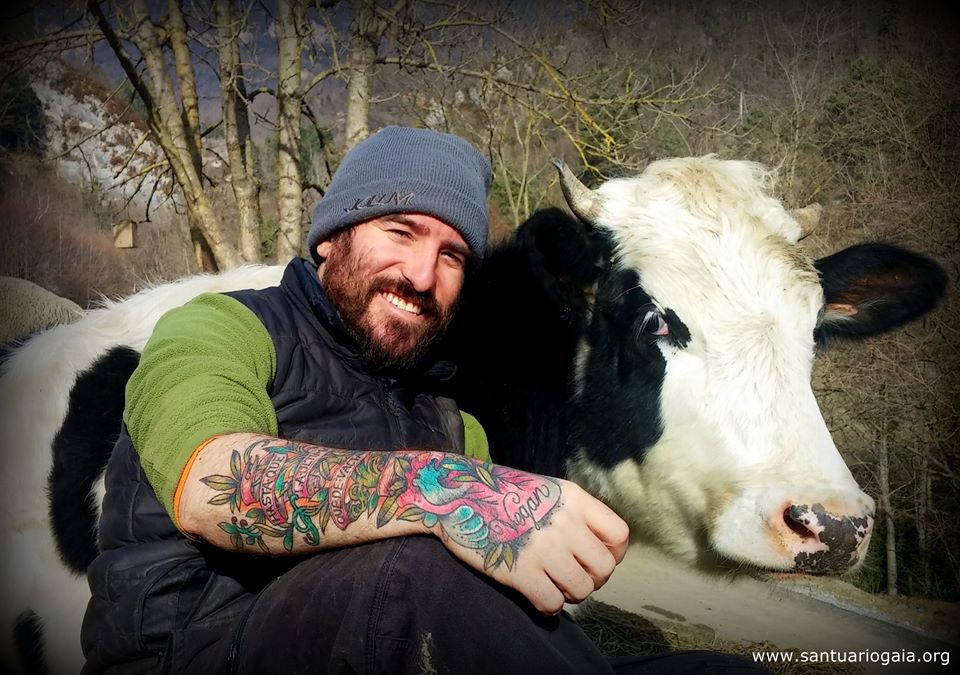 After Palma and her babies, the sanctuary took in a few dogs and cats, followed by some hens, ducks and turkeys. After nearly two years in operation, the sanctuary cares for a total of 250 animals.

Samuel the former veal calf, whose story has been featured on One Green Planet before calls Gaia home. To give you an idea of the kind of love and care the animals receive at the sanctuary, take a look at this adorable interaction between Samuel and his caretakers.

“Farm animals are probably the forgotten victims of humans,” Lopéz tells One Green Planet, “We use them as commodities, as things to use and discard when they’re not productive, or kill them to satisfy our taste buds. We hardly ever think about them as living and sentient creatures, because that would mean a complete change to our way of thinking and therefore a change in our lifestyle.”

However, after working with farmed animals, the reality that they are someones, not somethings becomes increasingly clear. 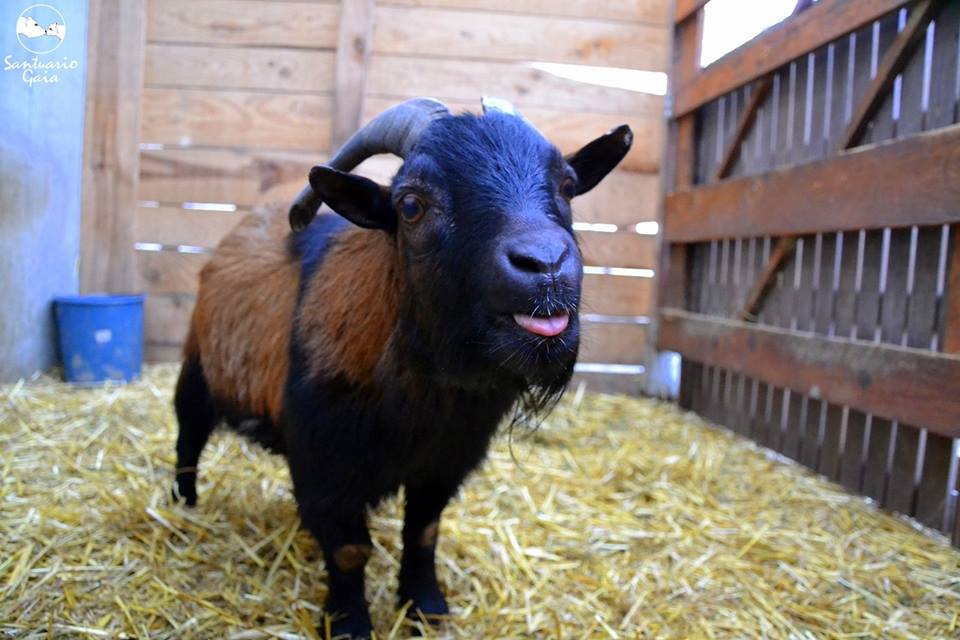 “Part of our aim is to let people know how these animals behave when they’re free to live their lives,” he continues, “How they feel love, fear, anger. How they do things we would never thought they could do (have you ever seen a bull calf learning to open closed doors?). Our aim is to reach people with their stories and everyday life. But mainly we want to give the chance of a life to as many animals as possible. We want to spare them a life of abuse or death for as many as we possibly can. We want to give them a safe and loving home for the rest of their lives.” 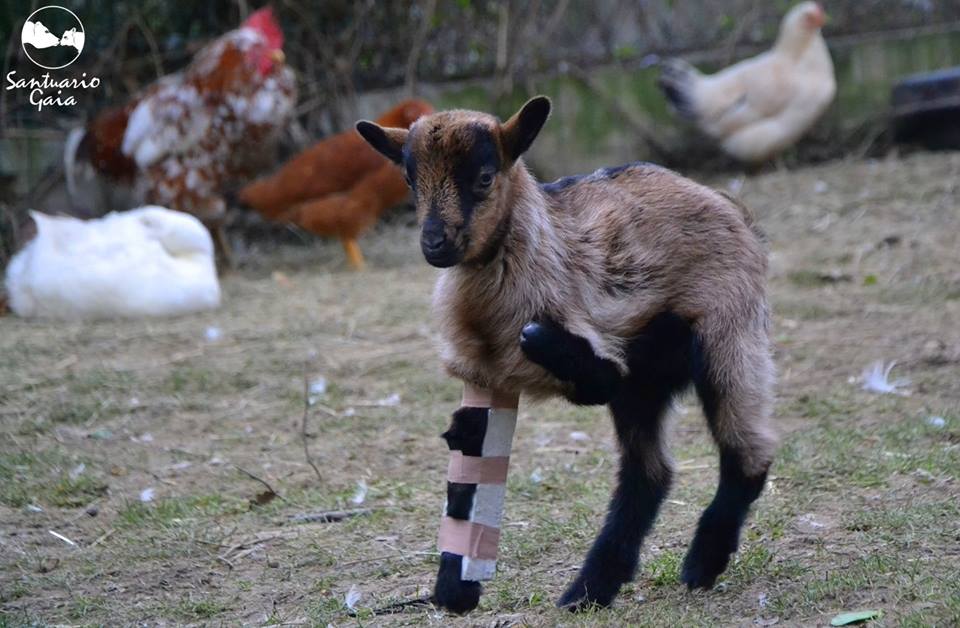 Since they opened their doors in 2012, Gaia Sanctuary has provided an incredible haven for well-deserving animals. However, the sanctuary is currently located on rented land and due to extenuating circumstances that are out of their control, Lopéz and Fernández are being forced off of this plot.

With only weeks to spare, they are working as hard as they possibly can to raise the funds needed to relocate all their animals and build a new sanctuary.

“For the well-being of all of them [the animals], it is our responsibility to do everything in our power to ensure that this tragic situation doesn’t repeat again. The future of the sanctuary and all its residents depends on having an owned property. A land which will be the final and permanent one.” 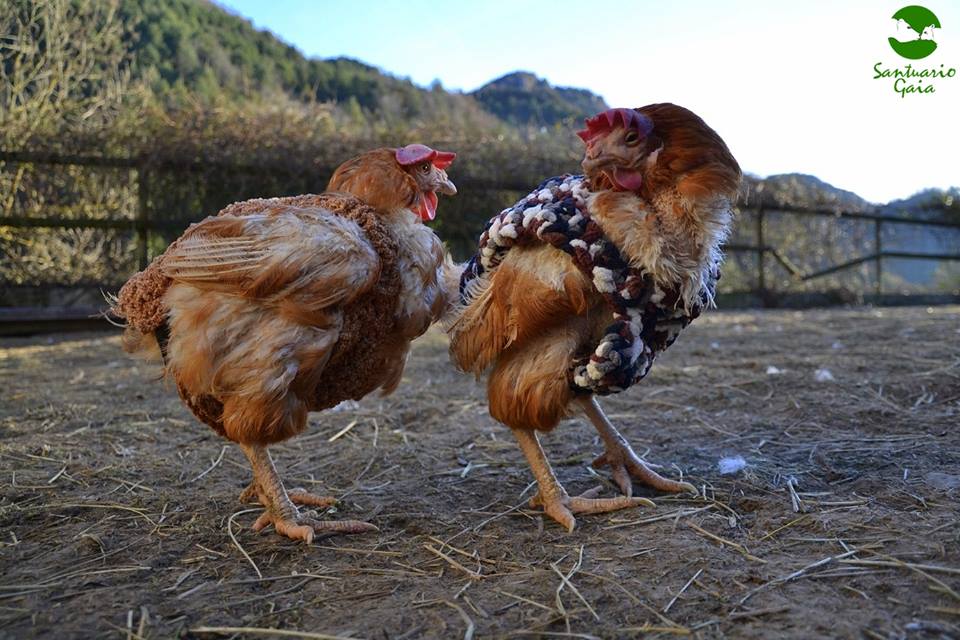 In Spain, farm animal sanctuaries can only be registered with the Farming and Livestock Department under the broad-head of an “extensive farming” facility. There is no special distinction separating sanctuaries from farms. Because they have to register under this label, there is a maximum number of animals that can live on the facility which is tied to the amount of space that it covers. With the 250 animals in their care, they will need to purchase a minimum of 25 acres of land to meet space requirements and regulations. The ultimate goal is to find a plot the size of 50 to 60 acres to enable them to take in more needy farm animals, but they are in desperate need of funds to allow them to do so.

While being evicted from their current home may appear as a tragedy, Lopéz and Fernández see it as an opportunity to expand their current sanctuary and even begin to put in place a formalized education and reception center that will make the sanctuary more open to the public. To see this become a reality, Gaia needs to raise a total of around $350,000. Calling on their many friends and followers, they have launched a Crowdfunding campaign and have managed to reach half of their goal so far. 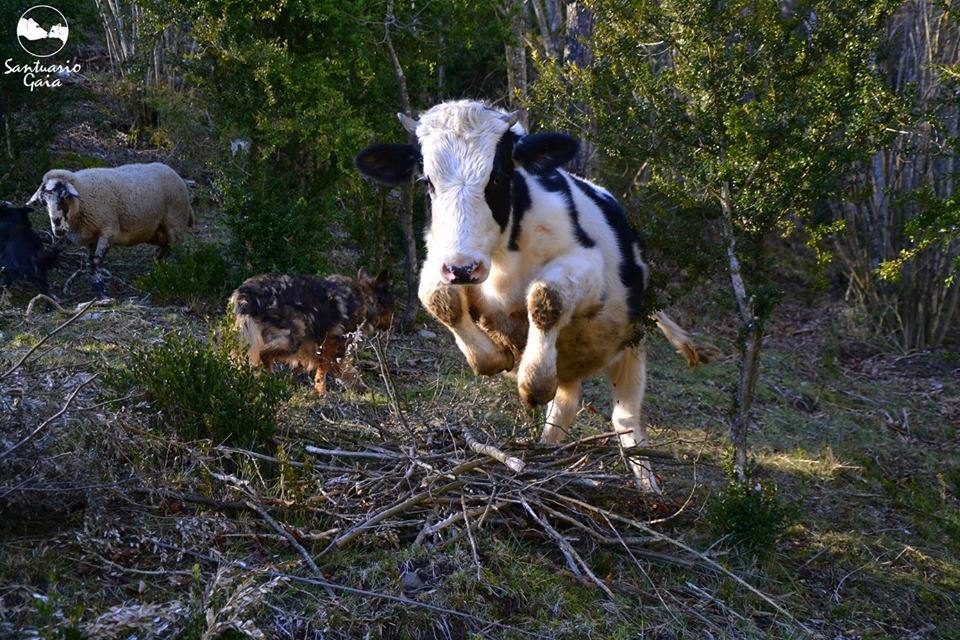 You can help save the current residents of Gaia Sanctuary and see this incredible organization expand to help even more animals by making a contribution to their campaign, here. Follow their Facebook page for more updates and information.

There is no doubt that Gaia Sanctuary has already made an huge impact for farm animals across the world and with our help, we can one day see them help even more!