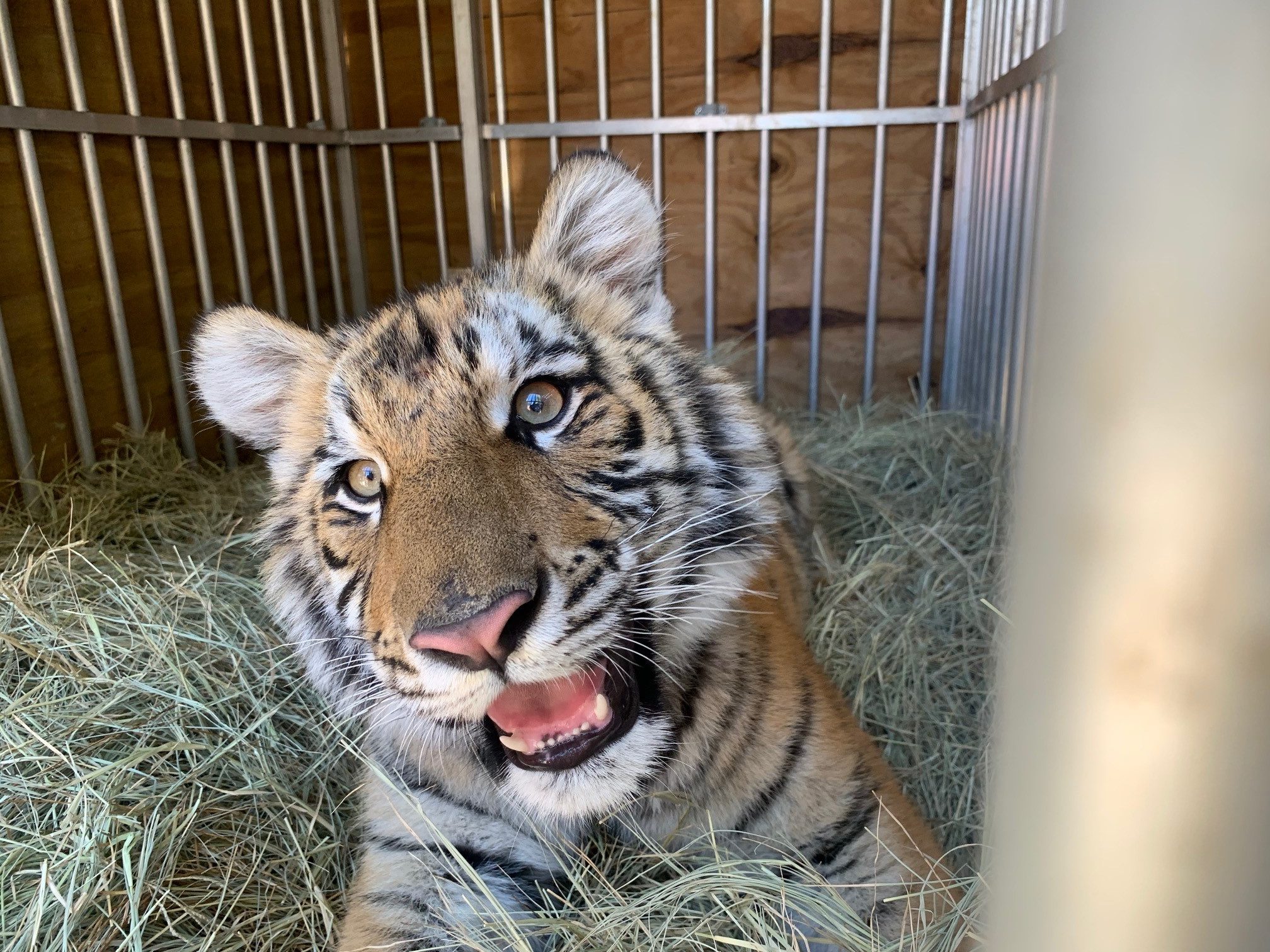 The Texas weather crisis has served as a blessing in disguise for a precious tiger cub being held in captivity as a “pet” in Bexar County. The four-month-old cub, weighing approximately sixty pounds, was found by authorities wearing a harness in the frigid cold. She was held at a local wildlife rehabilitation facility until temperatures rose to allow a five-hour road trip to Black Beauty Ranch, an exotic animal sanctuary. The cub was named “Elsa” after the Frozen character due to the icy conditions that ultimately saved her life- and ironically, the same name as the iconic and beloved lioness from the 1966 movie Born Free.

“Elsa is a rambunctious young wild animal and appears to be playful and active,” stated Noelle Almrud, senior director of Black Beauty Ranch, in an HSUS press release. “Sadly, she spent her first few months of life as someone’s pet. The dog harness she was wearing is a harsh reminder of the unnatural life wild animals are forced to endure in captivity. Elsa has a raw area on her forehead from rubbing on her cage from stress, and fur missing where the harness once was. She was on an inappropriate diet that would have caused severe health damage, but luckily, we got her early enough and will be able to remedy that. We expect her to quickly acclimate to her large, natural habitat and start behaving more like a tiger than a pet. We will provide everything she needs to have all of her physical and emotional needs met and give her the fairytale ending she deserves.”

The Humane Society of the United States as well as numerous animal welfare and conservation organizations maintain the stance that big cats are always inappropriate to keep as pets, for both the animal’s wellbeing and human safety. Even if a big cat’s caretaker has a “bond” with one of these powerful carnivores, at the end of the day, these animals are unpredictable, dangerous, and prone to disaster. Oftentimes when a big cat merely follows their instincts and attacks a human, the animal is the one who faces punishment, whether it be shooting in order to stop a fatal attack or euthanasia after inflicting a serious injury. The Global Federation of Animal Sanctuaries holds the stance that all unprotected contact with big cats such as tigers and lions is reckless and irresponsible.

President and CEO of the Humane Society of the United States Kitty Block commented on this rescue and underscored the importance of passing the Big Cat Public Safety Act: “Small young tigers like Elsa quickly become large, dangerous and deadly. Private possession of tigers as pets, and their use in cub petting ‘operations’ like we saw in Tiger King, is a serious and sometimes deadly problem in this country. Hundreds of people – including children- have been seriously injured or killed as a result of the cruel and unacceptable epidemic of owning big cats. The Big Cat Public Safety Act must be passed immediately in order to stop people from treating tigers as if they were pets.”

Big cats are known to do exceptionally poorly in captivity. Cubs used for photo ops are often taken from their mothers at an early age and also suffer psychologically as a result. Responsible facilities that house these animals must provide extensive enrichment, species-appropriate habitat, acreage of roaming space, and most importantly, high-security containment to protect both animal and human lives. The general public simply cannot provide this level of care in a household, which is why big cat “pet” stories nearly always end in disaster.

For Elsa, the future holds a more forgiving story ahead. The cub, though cute today, is ultimately a dangerous wild animal- and she will be respected as so in her new home. Elsa is settling into Black Beauty Ranch nicely, and she will spend the rest of her life in a “spacious, multi-acre enclosure with trees, woods, and platforms to climb and areas to sun herself”. If possible, she may eventually serve as the companion to another rescued tiger, who came to the sanctuary in 2019.