From Exotic Pet Breeder to Big Cat Rescuer: My Journey Towards Understanding 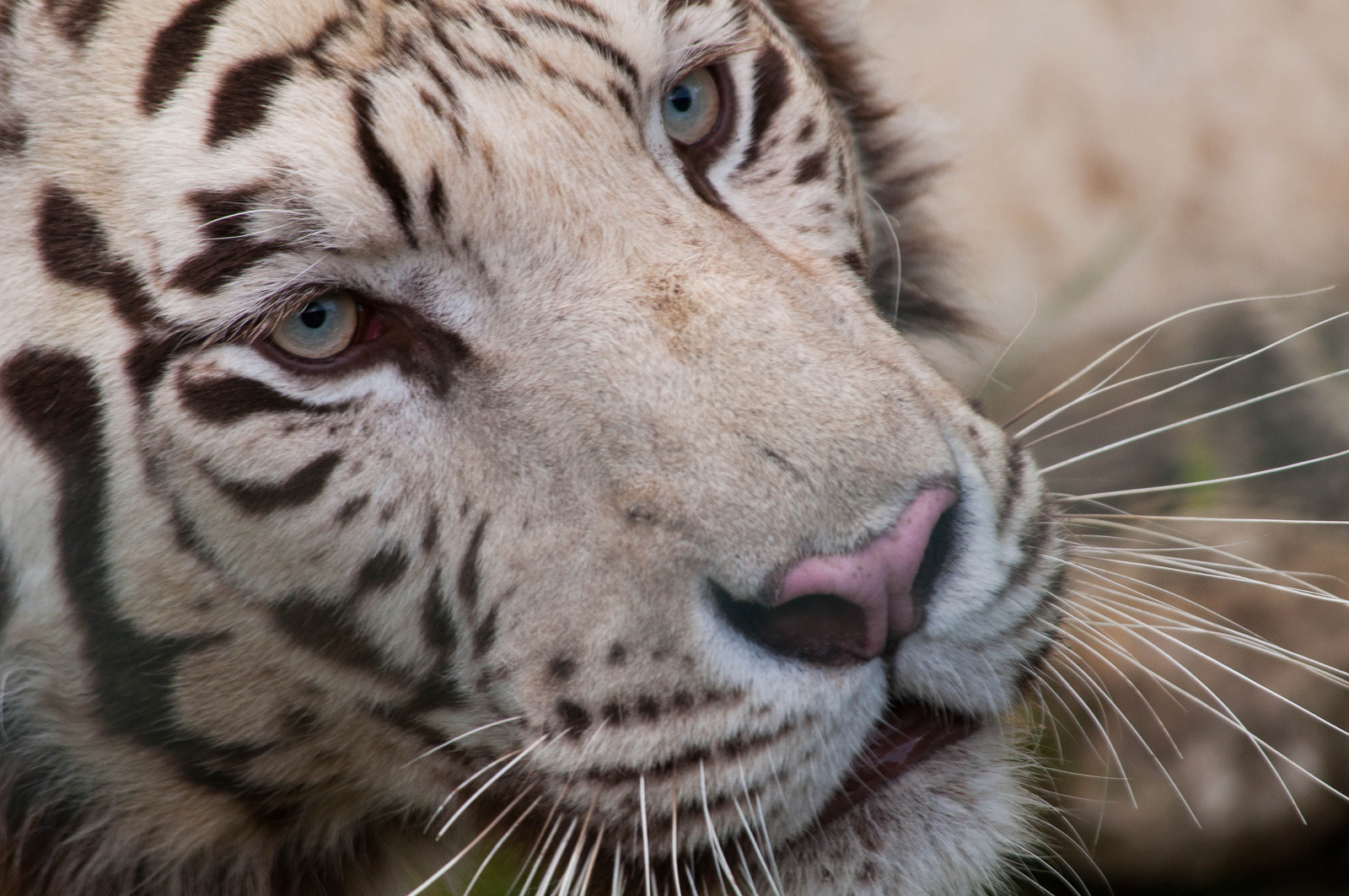 In 1996, at four weeks of age, Auroara was the 3rd tiger to come to Wildlife on Easy Street.

She died of cancer in 2008 and it has taken me this long to be able to talk about her again. (This article first appeared in 2011.)

I think it is because of the guilt I’ve carried for some of the ignorant things I did all those years ago.

I say ignorant because I didn’t see the big picture yet.

Jeff was telling me about some tour guests this week that kind of reminded me of that time. They LOVE big cats and were all a-blather about how much they enjoyed petting them at some other facility. People like this, are people like I was, who have been misled and lied to and they haven’t yet figured out that all those things they think are so cool are the reason that big cats languish in cages all around the country.

They have an enormous passion for animals and just don’t know how their actions are causing harm. Once they know better they are the most persistent of voices for the animals, and maybe it has something to do with the guilt.

In the case of Auroara, the guilt didn’t fade for decades. It wasn’t suppressed by giving her a good home. It didn’t begin to diminish until the wrong was set right, or nearly so anyway.

My Introduction to “Edu-tainment”

In 1996, my late husband Don and I went to a place called Predators Plus. They were in the “edu-tainment” business and used to take tigers to schools, fairs and parking lots.

At that time, they were the most professional looking outfit we had ever seen. Fancy trailers, transport cages that would still make us drool for use around here, and of course, magnificent looking tigers. But those were just the ones they showed.

As they toured us through their facility I was horrified to see the tigers behind the scenes. Because the big money makers were white tigers they were inbreeding like mad to improve their ratio of white to golden cubs. Back then, we didn’t know that is how white tigers were developed and they didn’t admit to it, but seeing first hand all of the abnormalities got me to wondering why. 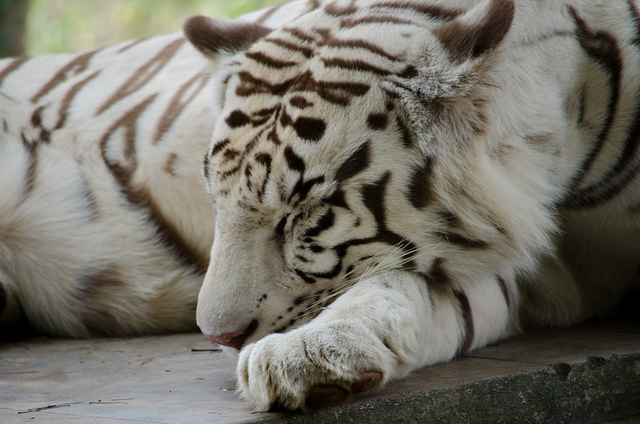 Don was telling them about some Serval kittens we had and again; back then we had been told that Servals didn’t breed well in zoos and that their only chance for survival was in being bred by the private sector. We later learned that was a lie and that none of the cats bred by the private sector could ever be part of any conservation breeding program. The owners of Predators Plus said they had always wanted an exotic cat that they could keep inside as a pet and tigers outgrew that role by the time they were just a few months old.

She said they had a litter of tiger cubs and one that they couldn’t “use” because she was lame and cross-eyed and asked if we would trade her a Serval kitten. 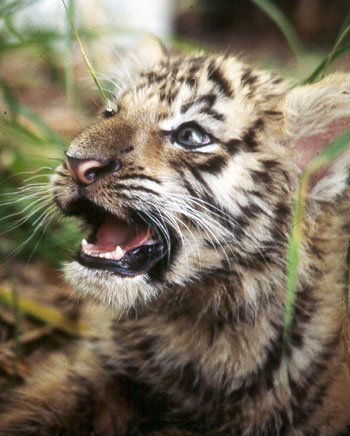 If you knew Auroara, you know that she was cross-eyed and lame and had some serious mental issues as well, but that just made her all the more adorable to those of us who loved her. She typified a “throw away tiger” as that would have been her fate. Because she was so small she wouldn’t have been a tiger that any breeder would have kept around to use as a cub-mill and because she wasn’t white none of the breeders, dealers or animal exploiters would want her.

Often cubs like her, who prove to be imperfect, are drowned or incinerated, so there is no doubt that Auroara was rescued, but here is where the guilt sets in:

I enabled the trade by giving them an outlet for getting rid of a tiger cub they didn’t want and I sent a Serval into a pet home. I don’t know what ever became of the Serval and haven’t been able to track down this outfit. Back then, we believed that some of the smaller cats could be good pets and should be bred to protect their numbers and believing that bred and sold a small number of smaller cats. 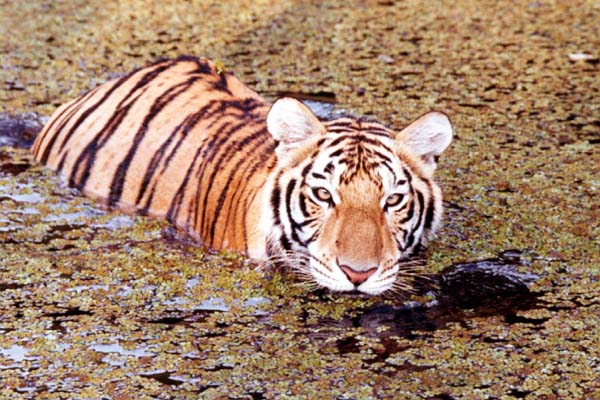 In my own defense, I took back every cat who “didn’t work out” so some of the cats at Big Cat Rescue were born here, sold as pets and then came back when they grew up and began to spray and bite. It was when the Servals and Bobcats began to come back that I came to realize that people just were not willing to make a lifetime commitment to the cats. When I lost Don in 1997, we stopped both breeding and selling and began frantically building new cages to separate cats and neutering and spaying as fast as funds would allow.

The Light at the End of the Tunnel

Yet still, even with coming to face my own ignorance and all of the work we have done here to educate the public about why they shouldn’t pay to play with cubs and why they shouldn’t pay to see tigers in performing acts, or pay to see the latest cub at the zoo, or go to movies that use big cats as props, I still carry a tremendous load of guilt for having had ANY part in the trade.

It is only now that I am starting to see real change take place that I can speak about Auroara because I see the light at the end of the tunnel.

I spent three hours with one of our new AdvoCats. She had been volunteering at a big cat sanctuary and was proud of it until she came for a tour of Big Cat Rescue. She was on the 1:30 tour and said that their cages, their tours and their interaction policies are very similar to ours but what just blew her away was that the tour guide wasn’t just telling people about where the cats came from but was giving the guests specific steps they could take to end the trade. 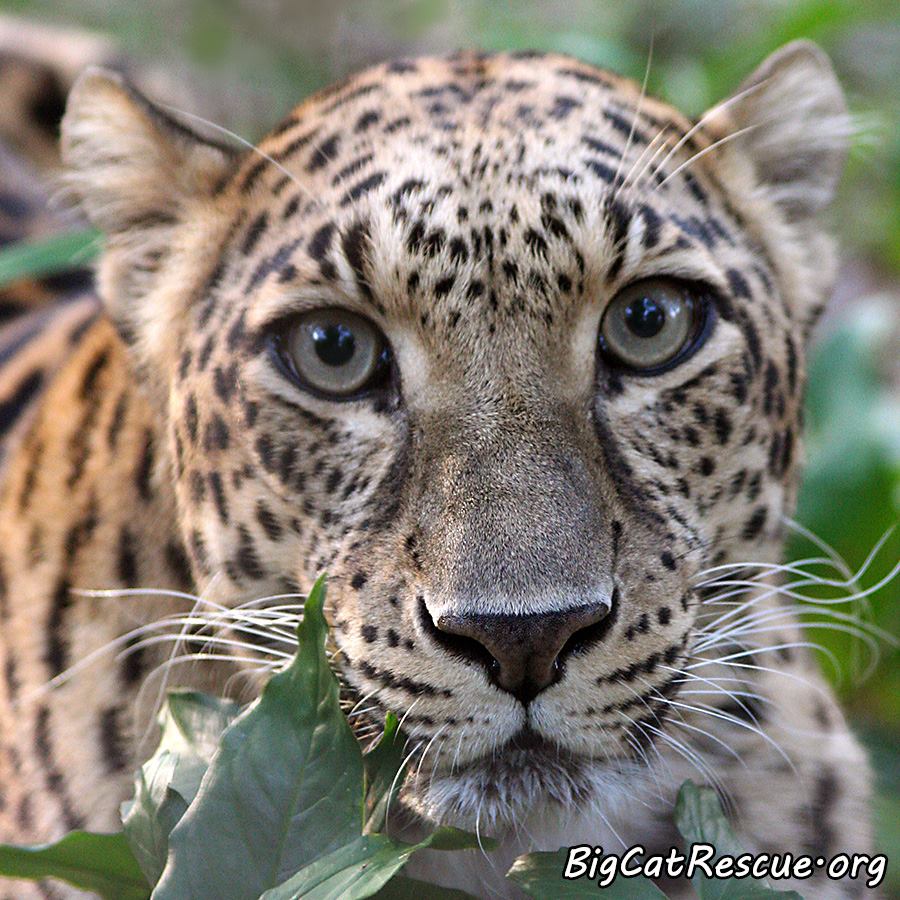 In all of her time volunteering at the other facility no one ever spoke to her about how to end the trade. As she would tell her friends and work colleagues about the place they would often comment that it just sounded like a band-aid on the problem and that got her to wondering what she could do to be a part of the solution.

That is why she came here from Ohio and when she saw what Big Cat Rescuers are doing in educating the public and getting them to sign the letters in the gift shop and sending them to the CatLaws.com site, she knew she had found her calling. One of the things that helps our cause the most is engaging people in the conversation about white tigers, circus cats, zoos and the exotic pet trade. We do that well with people who come to us, but we need to take the conversation to where it is happening.

I asked her to sign up for google alerts on keywords like tigers, circus, fur, etc. and then log in to each article and post comments about what people can do to end the trade and suffering.

This brings me back to the light at the end of the tunnel. As I read these posts online, I see the trends shifting and see more people opposing the abuse. We are reaching critical mass in the way people are thinking about wild cats and the way they are treating them. It takes a long time and many of you have been especially helpful in this arena.

Thanks to all of the letters that you have written and those you have encouraged our guests to write, the U.S. Fish and Wildlife Services (USFWS) took public comment in June 2010 to rescind the “generic tiger” exemption. Big Cat Rescuers have been the force that has caused them to reconsider this and will be the force that gets enough people to write the USFWS to get them rescind the exemption. More than 15,000 of you did, and yet today, in 2015, the USFWS still hasn’t implemented the final rule to end the rampant breeding of inbred and cross bred tigers.

When they do it will stop all of the backyard breeding of tigers. The wrong has nearly been set right. When that happens Auroara and all of the other tigers who have passed can truly rest in peace. We are getting so close to the finish line and it is because we are all working together, overlooking each others shortcomings and focusing on each others strengths that we can end the trade once and for all.