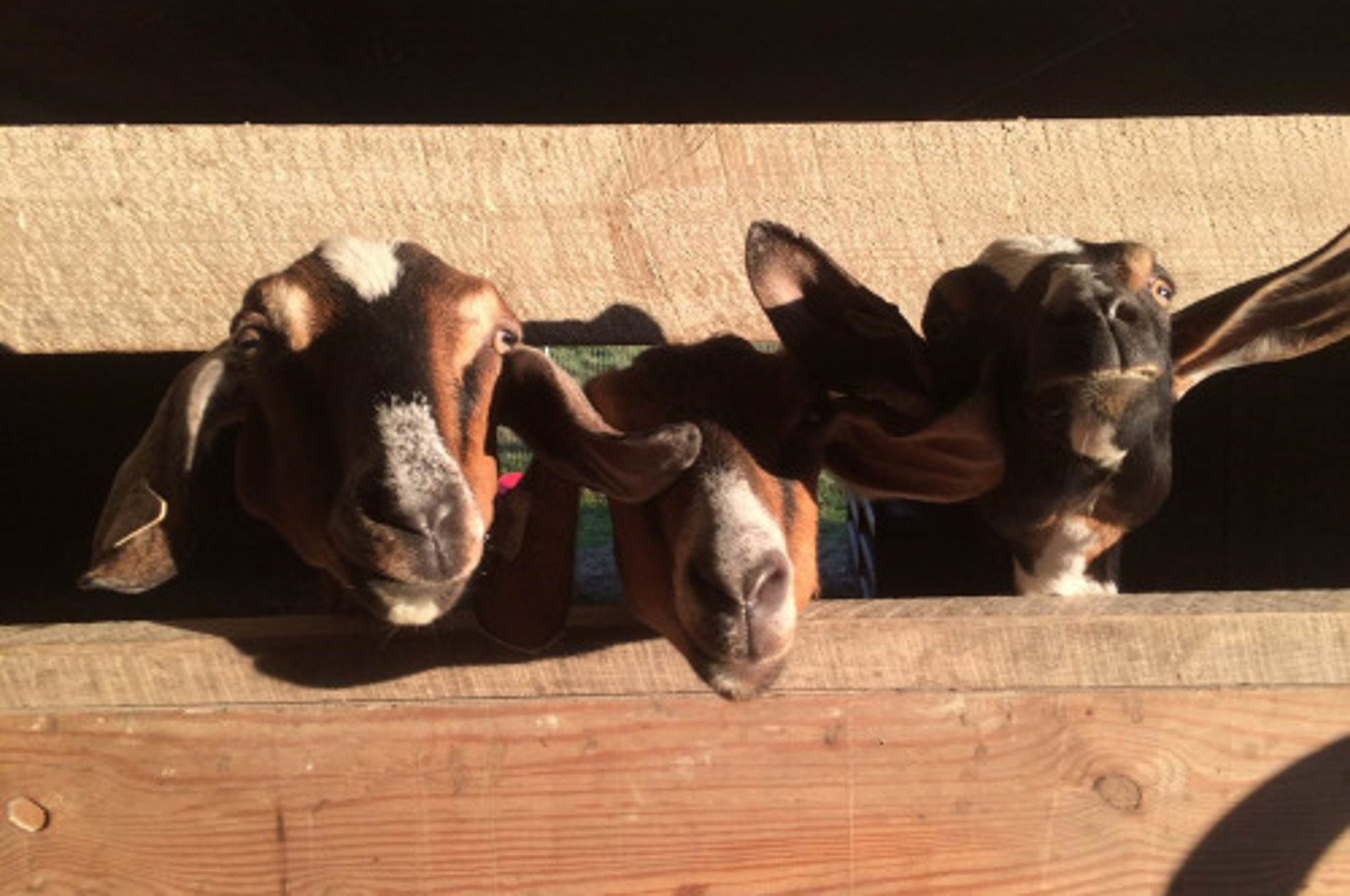 In January 2015, the state of Connecticut seized 74 goats from the Butterfield Farm Company after 53 dead goats were discovered on the property. Since the dairy industry depends on pregnancy, many of the surviving goats were pregnant at the time of the seizure; afterward, an additional 23 babies were born. This small-scale dairy operation was owned by a couple, Tara Bryson and Michael Hearl, who have recently been sentenced for cruelty to animals. A conviction is a rare occurrence for cases involving cruelty to farm animals; even when cases end with the seizure of the animals, the farm owners often receive little to no punishment. Getting animals off these farms is a huge struggle on its own, with so few laws in place to protect animals who are seen as food — so getting a conviction like this one is pretty huge.
Hearl, the former manager of the farm where the goats were neglected, has been sentenced to three years in prison. This is a big deal for sentencing in a case involving farm animals, which usually end in small fines or a ban on the ownership of animals for a year or more. 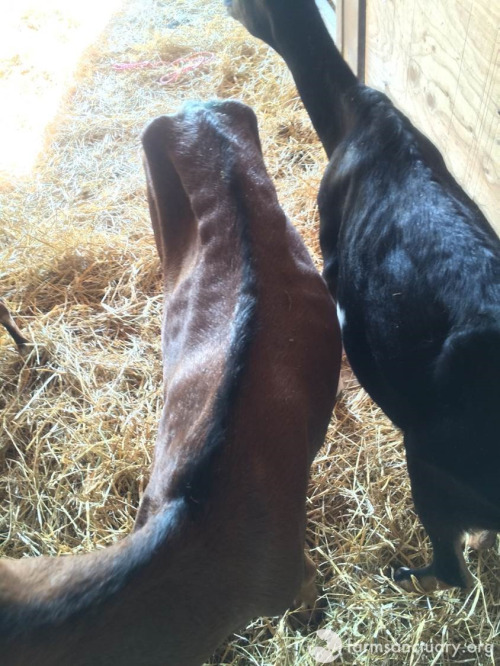 Emaciated Carmen and Amelia on their first day at the sanctuary. Since then, all the girls have added on some much-needed weight (maybe a bit too much).

Often, we see that goat farms and other small animal production facilities (like this one and, more recently, the farms in the Hudson Valley and Cattaraugus County rescues) are assumed by consumers to be a humane alternative to the egregious conditions found on larger farms or on factory farms. The idea of “farm-to-table”/eating and buying local is a very popular right now in animal agriculture, and many of these facilities use false advertising to play on the emotions of people who feel that they are doing something better. 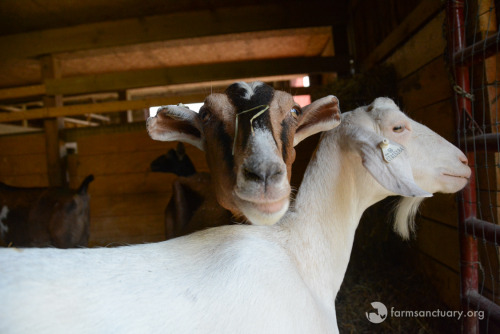 June Bug and her protector Phoebe. June Bug was always the sickest of the group, and sadly, we lost her just a few months ago. All of the goats we took in arrived with both Caseous Lymphadenitis (CL) and Caprine Arthritic Encephalitis (CAE), but June Bug was the in the worst shape.

And with a much harsher sentence, it feels like justice has been served, although the problem is much larger than just these two people. In a system where animals —  living beings —  are seen and treated as commodities and given only a level of care that corresponds to their financial value, the problem is far greater than one farm or even hundreds of farms. It is a systemic issue. 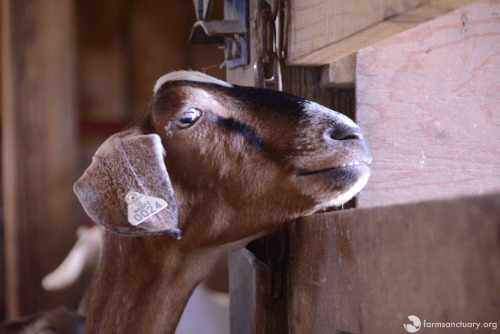 Babs is checking out her new home from her pen. A little scary, but soon she will see just how amazing it actually is to be free.

And in this case, the goats who died at the dairy were not the only victims. Adding insult to injury, after all they’d endured at the Cornwall farm, the survivors were again seen only as commodities by the very people who had “rescued” them. We worked to secure custody of all the goats, but the Connecticut Department of Agriculture (CTDOA) would only permit 12 of them to be sent to sanctuary to live out their lives (and these 12 were sent with heavy regulations, based on diseases they carry that are quite common on small and large farms, and, of course, sanctuaries).

Thirteen others were purchased at auction by another sanctuary, but the majority of those saved — who’d been cared for over a period of months at the Second Chance Large Animal Rehabilitation Facility located at the York Correctional Institution in Niantic, CT — were sold to slaughter. The girls who were able to come to Farm Sanctuary were spared the fate of their herdmates because of their health issues; the CTDOA wanted to keep them out of the food system and eventually agreed to let them come to us instead. 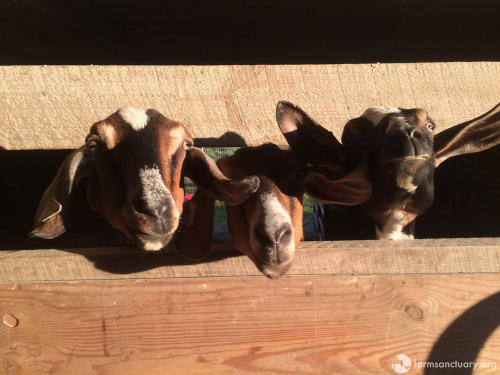 Babs, Carmen, and Amelia popping up to say hello! These girls are super-friendly thanks to the amazing folks at the York Correctional Institution in Niantic, CT, where they were housed for months before arriving at our New York Shelter.

Thankfully, the lucky 12 had clearly received love and kindness from the inmates at the correctional institution, because these girls did not arrive frightened. Instead, they had clearly become used to being loved during the seven months they spent there. Food, water, and love were exactly what these sweet girls needed to recover from the trauma of their former lives, and we are so thankful to the Second Chance Large Animal Rehabilitation Facility for giving that to them.

So let’s meet the girls — starting today with the belle of the ball, the queen of the tiny herd, and one of the sweetest goats we have ever met: Phoebe.

Phoebe, right, arrived very thin with a softball-sized abscess (caused by her Caseous Lymphadenitis, or CL) on her chest, which took nearly six months to surface so it could be treated. Here she is with her skinny pal Babs. 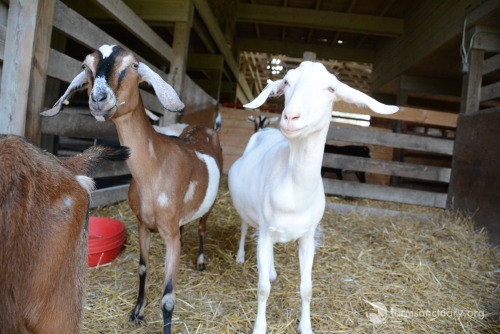 A shyer June Bug (that changed quickly) watches us from behind the stronger, braver Phoebe.

Phoebe is very talkative, but also loves to give you a little nip if you don’t pay attention to her — or if you are a goat in her way, or a donkey trying to get the best hay. She is also a big kisser! 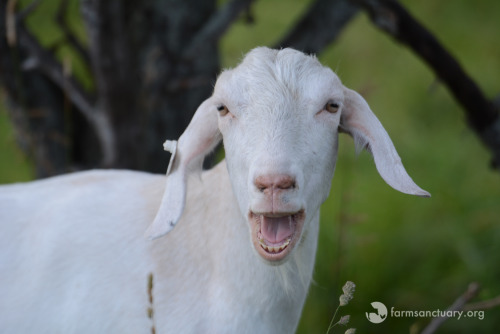 Abscess is gone, but there will always be a scar where it once was. It ended up being deeper and much larger than we thought when she came; she is clearly more comfortable without it. 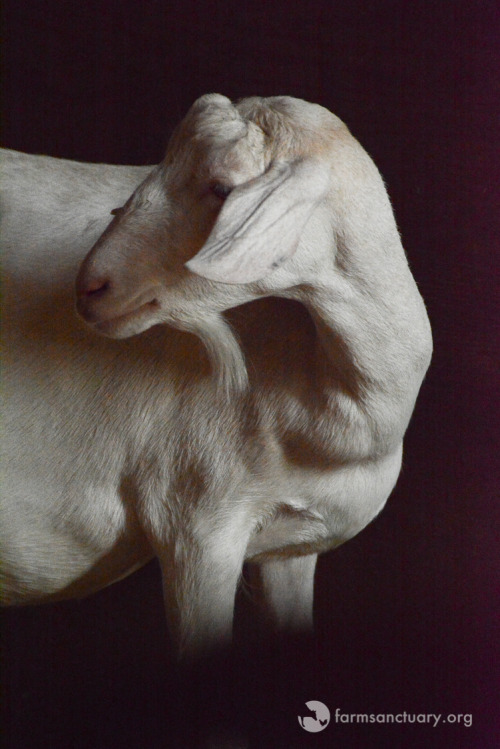 Phoebe and her friends remind us that the small choices we make every day can have a big effect on the well-being of animals. Well-meaning but uninformed purchases can inadvertently support animal suffering, so it’s important to learn the facts about the businesses you patronize. A compassionate world begins with you!