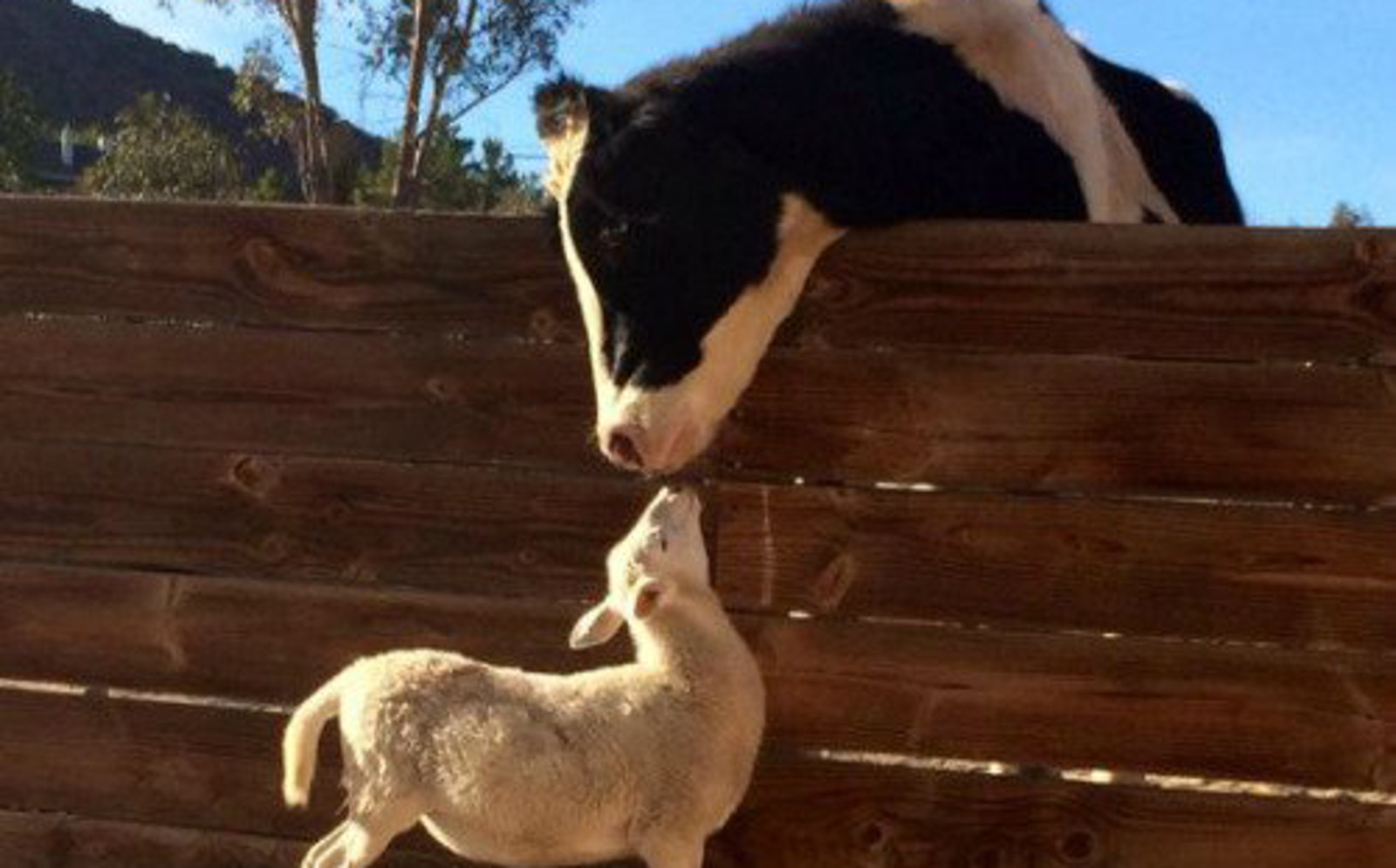 Late in the fall of 2014, we received a call about a lamb living in a backyard in an urban residential neighborhood in Los Angeles. The lamb had been given to a young girl as a present. The girl’s city-dwelling parents had never met a lamb before and certainly didn’t know anything about caring for one. After a month of having the lamb in their care, they reached out to us for help, hoping to give her a better life by placing her with us. Along with their plea, they sent photos of their little lamb. Without hesitation, we sprang into action, recognizing the inadequacy of the situation this lamb had found herself in. 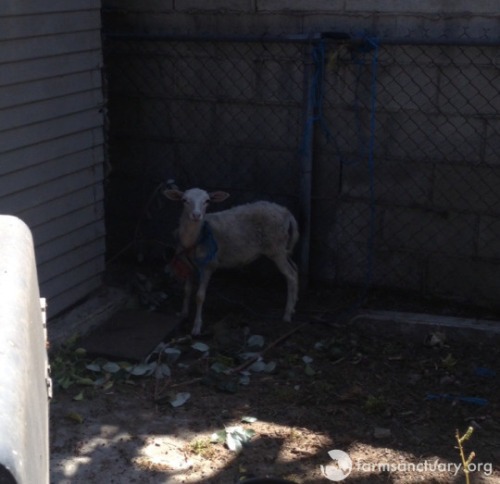 The initial photo sent to us of Carlee, terrified with a rope around her neck in an urban backyard.

When we arrived at the home, we were surprised to find that the lamb was not really a lamb at all, but rather an adult miniature Katahdin sheep. As we had never met such a magical little creature before, we had been fooled by Carlee’s photos but were hardly disappointed at the reality. Baby or adult, we were relieved to have her, since she deserved so much more than her circumstances allowed. As we suspected, the urban residential backyard was an improper home for a farm animal. While they had good intentions, the family with whom she lived did not know how to care for little Carlee, and she lacked the shelter and appropriate food she needed to thrive. Carlee was being penned in a narrow area between the garage and the perimeter wall, and occasionally had access to the backyard. There, she would eat fallen fruit and run in terror every time anyone approached her. 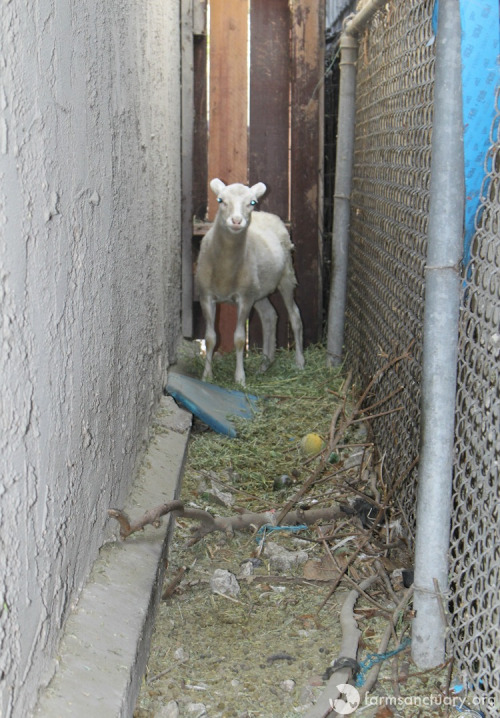 Effectuating Carlee’s rescue was no easy task. Southern California Shelter Manager Alexandra Caswell could barely fit in the limited space between the garage and the wall, and every time she approached Carlee, the sheep moved backward. The fear in Carlee’s eyes was palpable, and with nowhere to go, we worried Carlee would jump the wall or go over or through Alexandra. Thankfully, when cornered between Alexandra and the wall, Carlee froze and allowed herself to be harnessed and then picked up. This fully-grown sheep was small enough for Alexandra to hold on her own — and a wonder to behold! 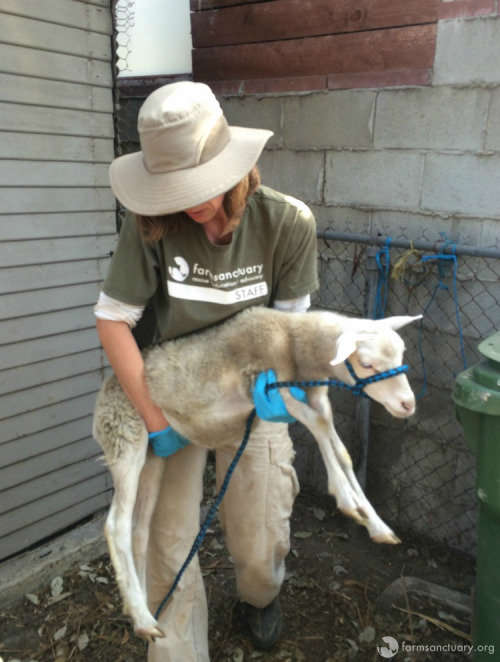 Alexandra carries Carlee to her new life at sanctuary.

When Carlee arrived at our Acton, CA, shelter, she remained timid and afraid of us, running from our caregivers whenever they entered her enclosure. Since sheep are herd animals, Carlee needed to be among her fellow “sheeple” — sheep people — to feel safe and secure. However, we had to place her, as we do with all incoming animals, in quarantine to monitor her for health issues before introducing her to a larger group. While wooly kinship awaited this little being at the end of her quarantine period, sweet Carlee could not stand the wait, and she bellowed and bellowed for the sheeple to come to her rescue. To Carlee’s apparent dismay and exasperation, her pleas remained unanswered. Hearing her future comrades but not being able to interact with them must have seemed like torture to tiny Carlee.

In the interim, once her initial blood work and fecal results came back, Carlee was free to run around the extended courtyard with humanimal supervision. Resolute in her distrust of us, Carlee kept her distance, eyeing us suspiciously with every move. However, her mindset began to change once she met her bovine neighbors, who took turns meeting the little sheep over the fence between their enclosures. What a magnificent spectacle it was to behold! Carlee’s diminutive stature was all the more apparent in juxtaposition with the cattle, whose heads alone dwarfed her tiny body. 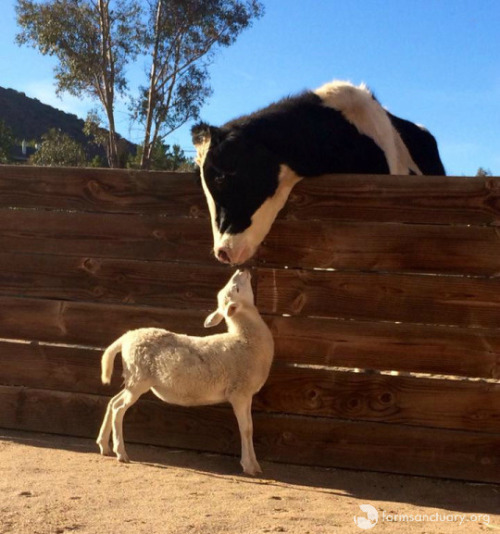 Carlee visits with the resident goofball of the Southern California Shelter, Safran steer.

Carlee and the cattle boys were mutually enthralled with one another, and for the first time, we saw Carlee start to relax. It was extremely therapeutic for her to be around a herd, and we were thrilled that they could offer her the comfort that she so desperately needed. Carlee and William seemed to be particularly enchanted with one another, and his companionship was instrumental in helping her adjust to her new home. 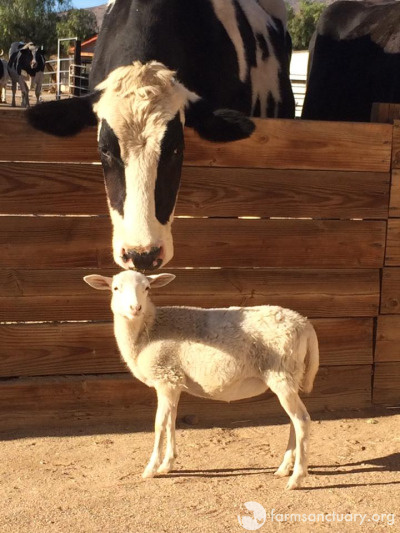 William, aka “The Noodle,” sniffs his little buddy Carlee.

After this first meeting, Carlee stopped crying toward the sheep enclosure and instead focused her full attention on the cattle yard. She yelled at us to let her out and to see her cattle friends and yelled at them to come and rescue her. Carlee’s remaining days in quarantine were thus spent mingling with the cattle under our bemused supervision. 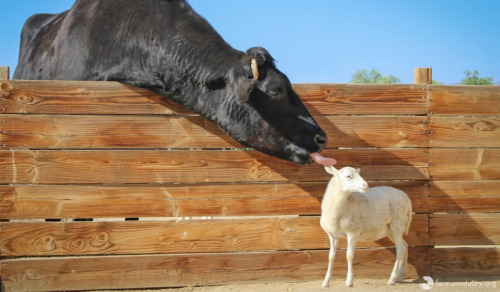 Much to our surprise and joy, Carlee’s experiences with the cattle helped her to warm up to us. She cautiously approached us and allowed us to be in her vicinity without bolting. She even jumped over and on her rescuer, Alexandra, who happily added “humanimal trampoline” to her already impressive resume of shelter manager and professional photographer.

Out in the World!

Finally, the day arrived when Carlee’s quarantine period was over. We rejoiced and so did she, but we were all a little sad to witness the end of the interspecies friendship she shared with the cattle. To ease her transition into the main flock, we first introduced her to Bear, the newest addition to the flock prior to Carlee. Although Bear had been integrated into the flock more than a year earlier, she remained a loner without any sheeple friends — tolerant acquaintances, yes, but not a single sheeple friend to call her own.

When Bear and Carlee met, they did not become best friends at first sight or even friends; they playfully tussled, as sheep do, to establish dominance. Quickly, though, they abandoned the power struggle for true friendship. 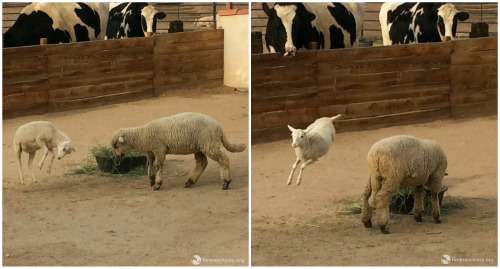 Bear triumphantly introduced Carlee to the rest of the sheep and goats, and they appeared as bewildered by her miniature size as we had been.

For the first few months, Carlee was attached to Bear’s side. Bear is our Acton shelter’s tallest sheep and Carlee is the shortest, so finding Carlee was sometimes challenging in those early days! Often, we’d see her shyly peeking over Bear’s back. Over time, with a trusted sheep friend and a stable family of others around her, Carlee began to trust us more and more. She stopped darting behind or under Bear every time we approached. Occasionally, she even allowed us to pet her. And then one day, for no apparent reason, a switch flipped and Carlee no longer treated us like her mortal enemies. We could lay with her and give her hugs, and she began begging us to pet her — pawing at us furiously if we had the audacity to interrupt a petting session. The transformation was astounding! 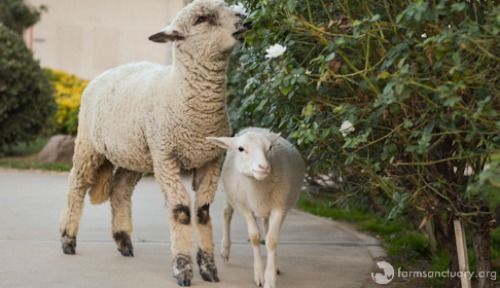 We will never know what finally made sweet Carlee see us as friends, not foes, but we are so glad to be now considered her trusted buddies. How else would we be given the special honor of knowing how to make her tail wag? This adorable nymph uncontrollably wags her tail whenever her keel bone is petted.

Love, patience, and Farm Sanctuary life converted yet another terrified soul into a trusting friend. But that is hardly the end of Carlee’s tale. 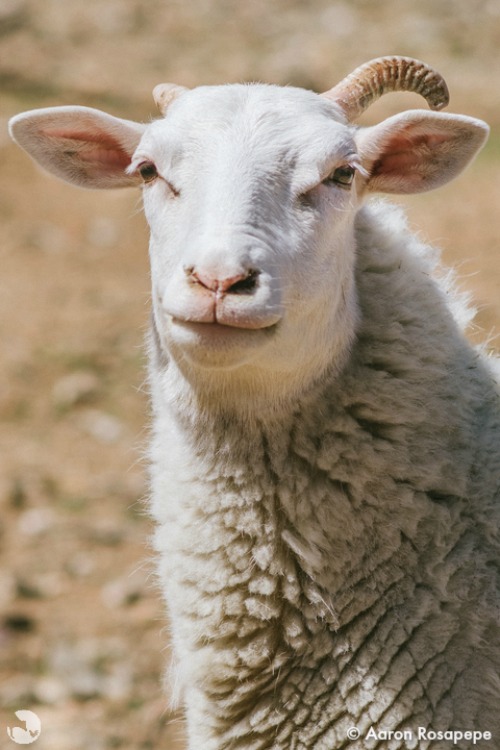 Carlee’s size initially piqued our interest; her spirit won over our hearts.

Please share Carlee’s story. Together, we can encourage awareness and understanding about the rich emotional lives of sheep. We can make a difference for all farm animals. With your support, we can continue to promote compassionate, vegan living through rescue, education, and advocacy efforts. A compassionate world begins with you!