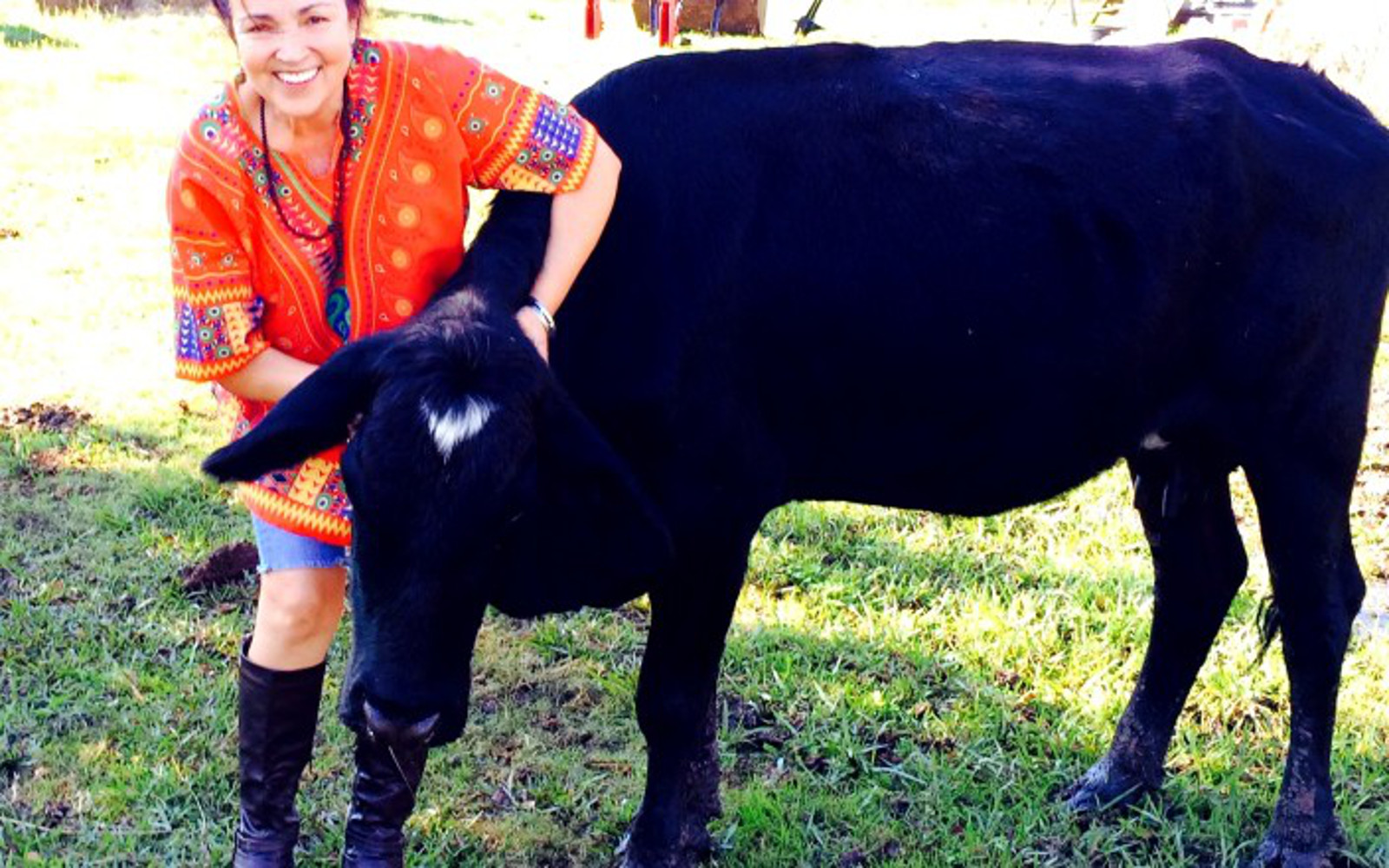 If you were to come across a Facebook page entitled, “Vegan Journal of a Rancher’s Wife,” it would probably make you stop and pause for a second. Surely, this is the response that Renee King-Sonnen has become accustomed to getting after marrying a fourth generation cattle rancher and shortly thereafter deciding to take on a vegan lifestyle. While this in and of itself might seem extraordinary, Renee is now working to convert her husband’s ranch into a farm animal sanctuary. Needless to say, this is a woman on a mission.

Life on the Ranch

After moving to her husbands 96 acre cattle ranch, the reality of how cows suffer in the animal agriculture industry began to sink in.

“Witnessing the calves go to auction and the mamas crying every night for a week is enough to drive a sensitive person over the edge,” Renee tells One Green Planet. It was only a matter of time before she transitioned into a plant-based diet and when she did this, her perspective of the animals on her husband’s farm changed entirely.

“I see them in a way that I’ve never seen them before – it’s like something in my DNA has been turned on that I never knew was there before I see their soul and they see mine – it’s so hard to put into words.” 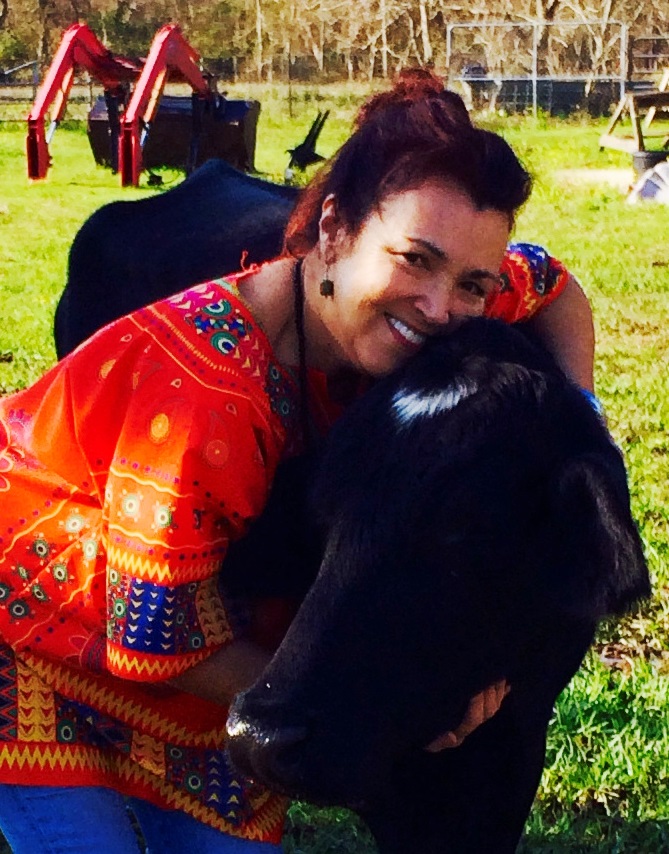 Cows are incredibly intelligent and emotional creatures. Many people do not stop to take the time to appreciate how dynamic these animals are because they don’t want to take on the guilt that comes with also eating meat. It is a sad fact, but a social reality all the same.

Once Renee gave up meat and started to bond with the cows, it became more and more difficult to level with what her husband did for a living. Every time a group of calves was piled into her husband’s red trailer and sent out for sale, and their inevitable slaughter, Renee would cry and mourn their loss. Knowing the dual pain that the mothers of these calves were experiencing became too much for her to take. To help ease her suffering, Renee’s husband would try and hide sale days from her, but she continued to dread and loathe the entire process.

The red trailer became a sort of foreboding symbol of what was to come.

Rowdy Girl and Houdini, the Cows Who Started it All

Rowdy Girl was the first cow that Renee ever saved. She purchased Rowdy as a small calf for a mere $300 and bottle fed her every day. It was not long until their bond was forged. Nearly five and a half years later, Rowdy has a little calf of her own, Houdini. Houdini’s name comes from her cunning ability to sneak out of the ranch’s fence unnoticed. Renee explains that Rowdy Girl used to do the same and the trait seems to have been passed down.

While Houdini’s desire to run free is admirable, Renee and her husband started to get in trouble with local law enforcement. Seeing Houdini and Rowdy as a liability, Renee’s husband told her that they were going to have to sell them both. 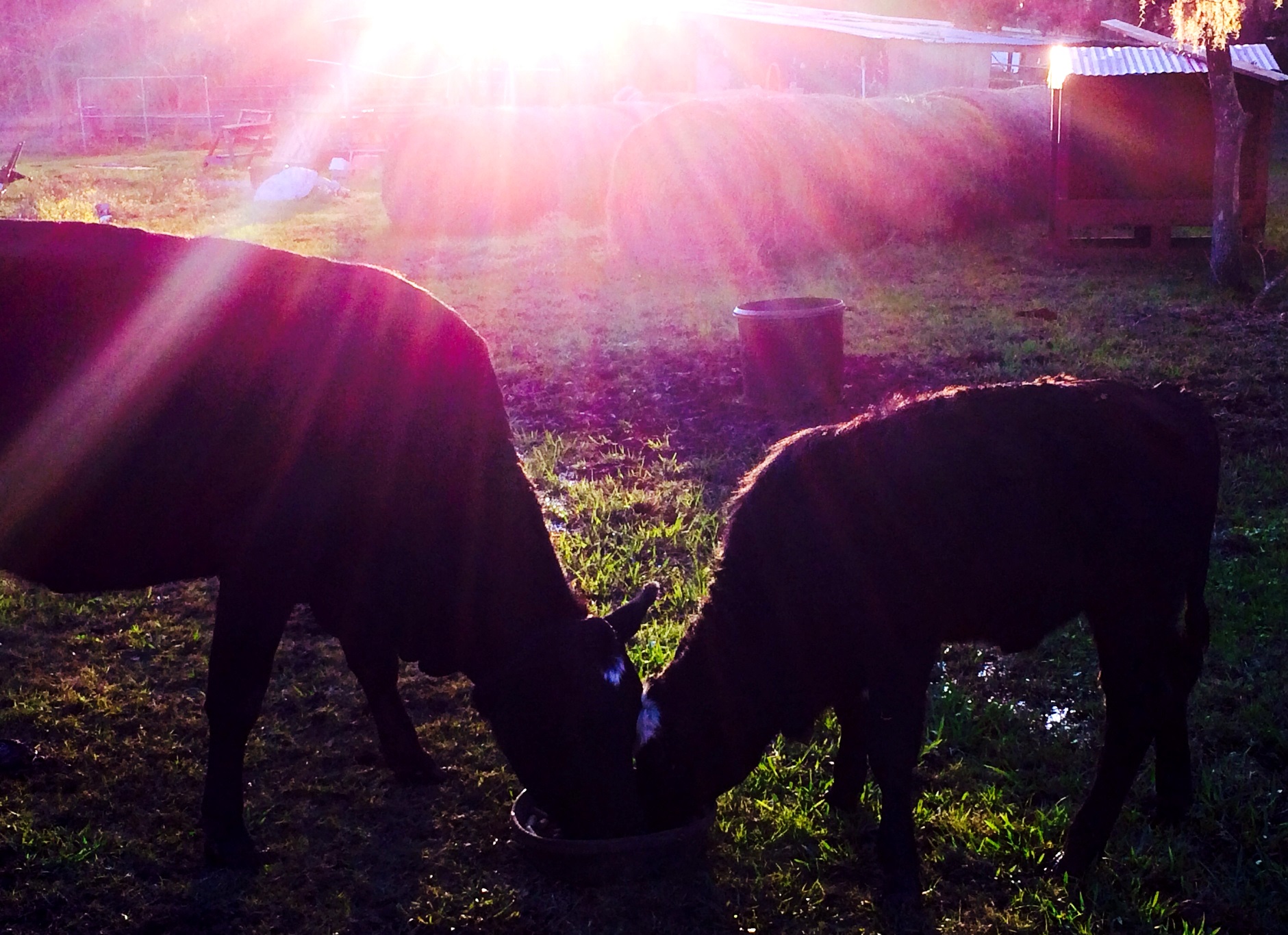 This is where Renee put her foot down. Selling Rowdy and Houdini was absolutely off the table, but finding a credible farm sanctuary that could take them kept leading to dead ends.

“One day shortly after all the dead ends I blurted out to my husband ‘Why don’t we just turn our ranch into a farm sanctuary?'” Renee tells One Green Planet.

Naturally, this outburst was met with a series of “Have you lost your mind?!” from her husband. Maybe she had (she contends), but if other people could start farm sanctuaries, then why couldn’t she? 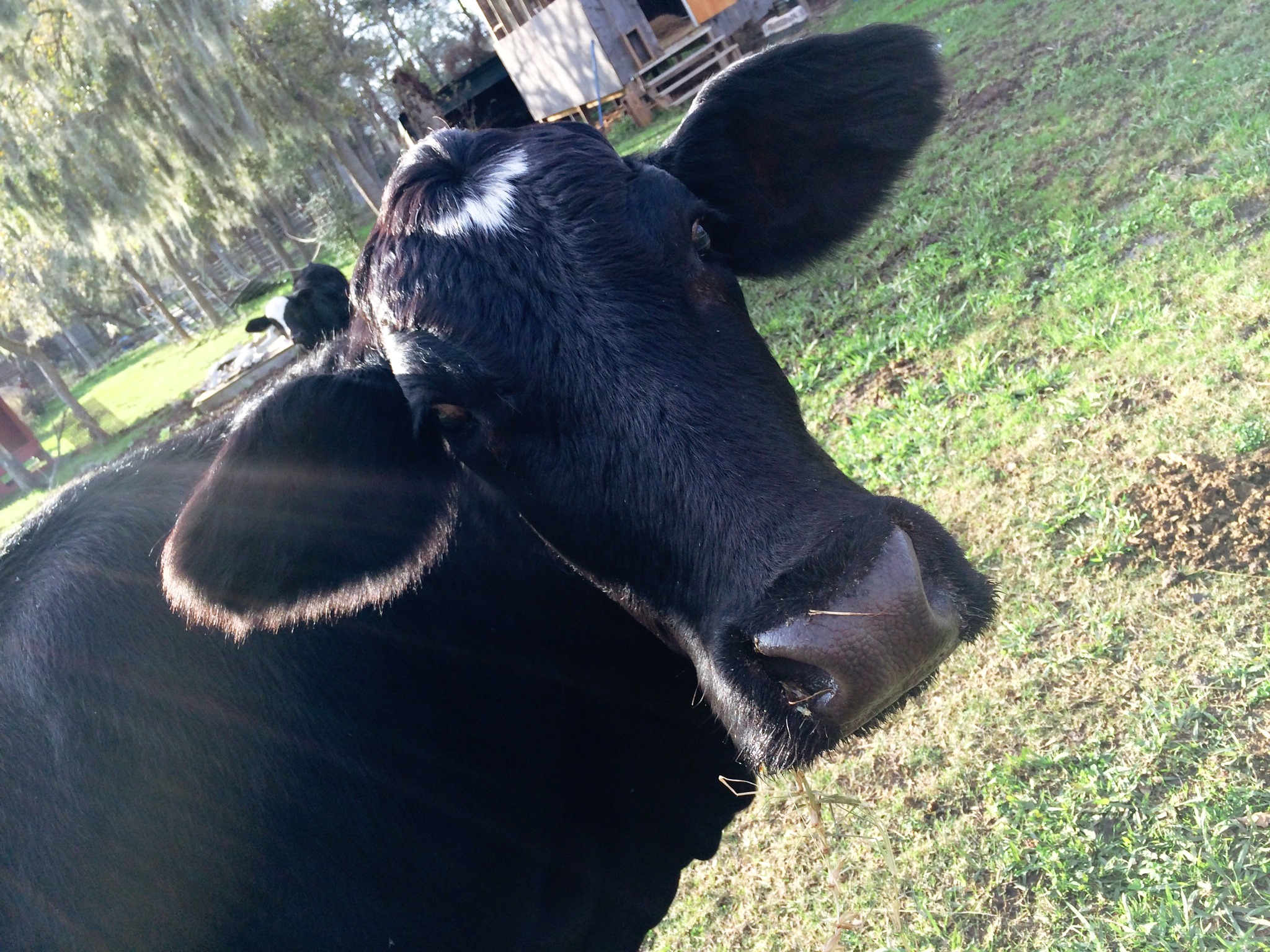 After having some time to think, it was decided that Renee could convert the ranch to a sanctuary if she could raise the sum of $30,000 to buy the cows in his care.

“The way he puts it, ‘it was either he concede, or divorce,'” Renee jokes, “And along the way his heart is softening. He’s watched every documentary I’ve put on the TV and he sees the benefits of going plant based.”

Once the initial cost was covered, he agreed to leave the cattle business and go to work on the sanctuary. Simple enough, right?

From Ranch to Refuge

Renee explains that it took a while to fully convince her husband that she was serious and would make the sanctuary happen, but when she launched her IndieGoGo campaign to help raise funds, there was no turning back. The sanctuary will be called Rowdy Girl Sanctuary, after its original muse. 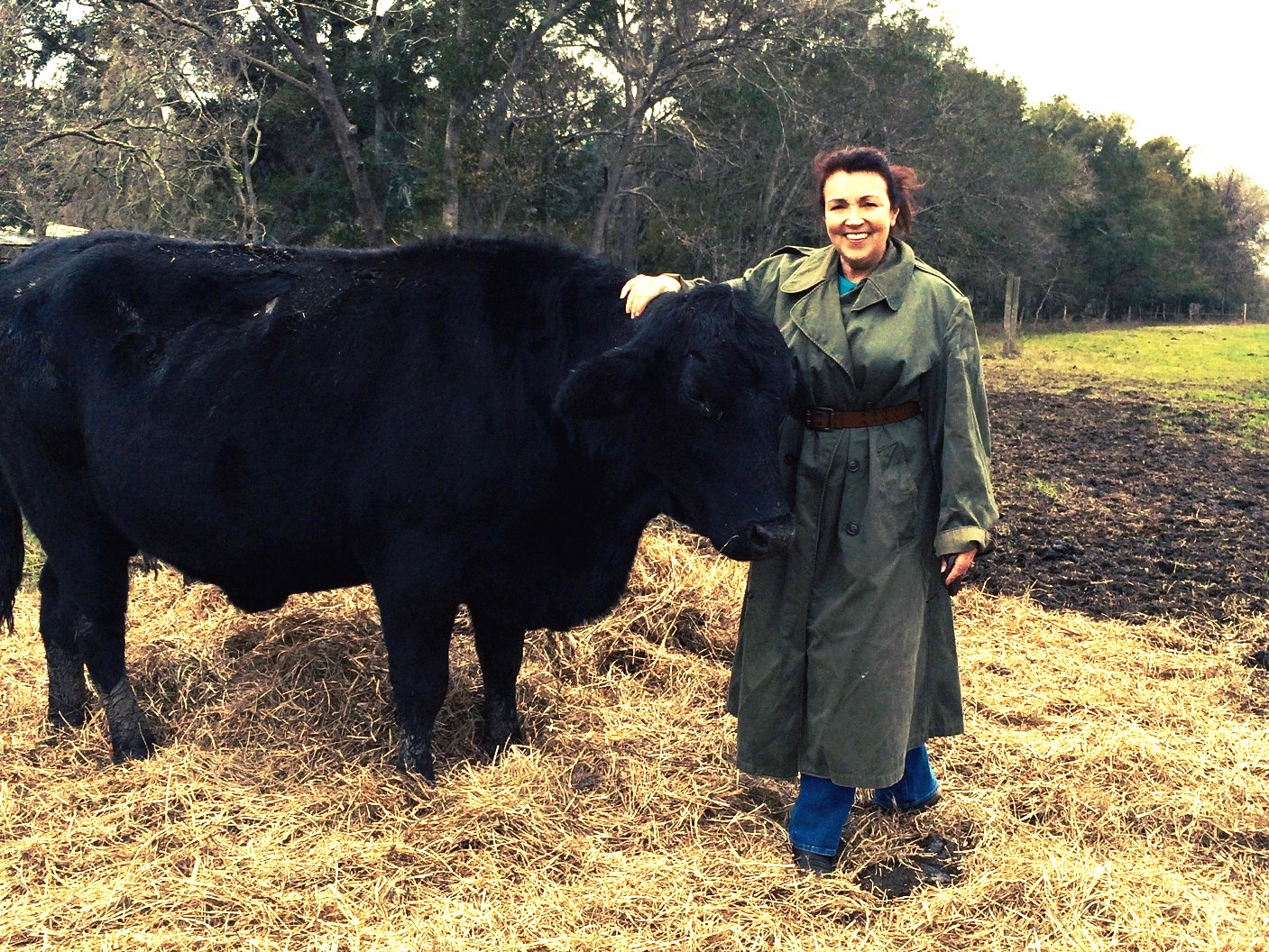 Starting a farm sanctuary is a serious business, but Renee has been sure to cover all the bases, conferring with experts like Gene Baur and Susie Coston from Farm Sanctuary, Harold Brown from Peaceable Kingdom, and many more. The goal is to have Rowdy Girl Sanctuary be more than just a haven for farm animals, but to also actively teach the public about a plant-based diet and cruelty-free lifestyle. Renee hopes that perhaps her example will even inspire other small Texas farmers to do the same.

There are 29 cows in total (12 of which are pregnant) that Renee hopes to purchase from her husband and donate to the sanctuary. There are also four horses and six chickens living on the ranch who will also become part of the sanctuary. Once they are in full sanctuary operation, Renee would like to start caring for pigs, goats and sheep as well, granted they have enough space to do so.

While some people might have thought Renee was crazy to turn a cattle ranch into a refuge for farm animals, we think it would have been more crazy for her not to try. 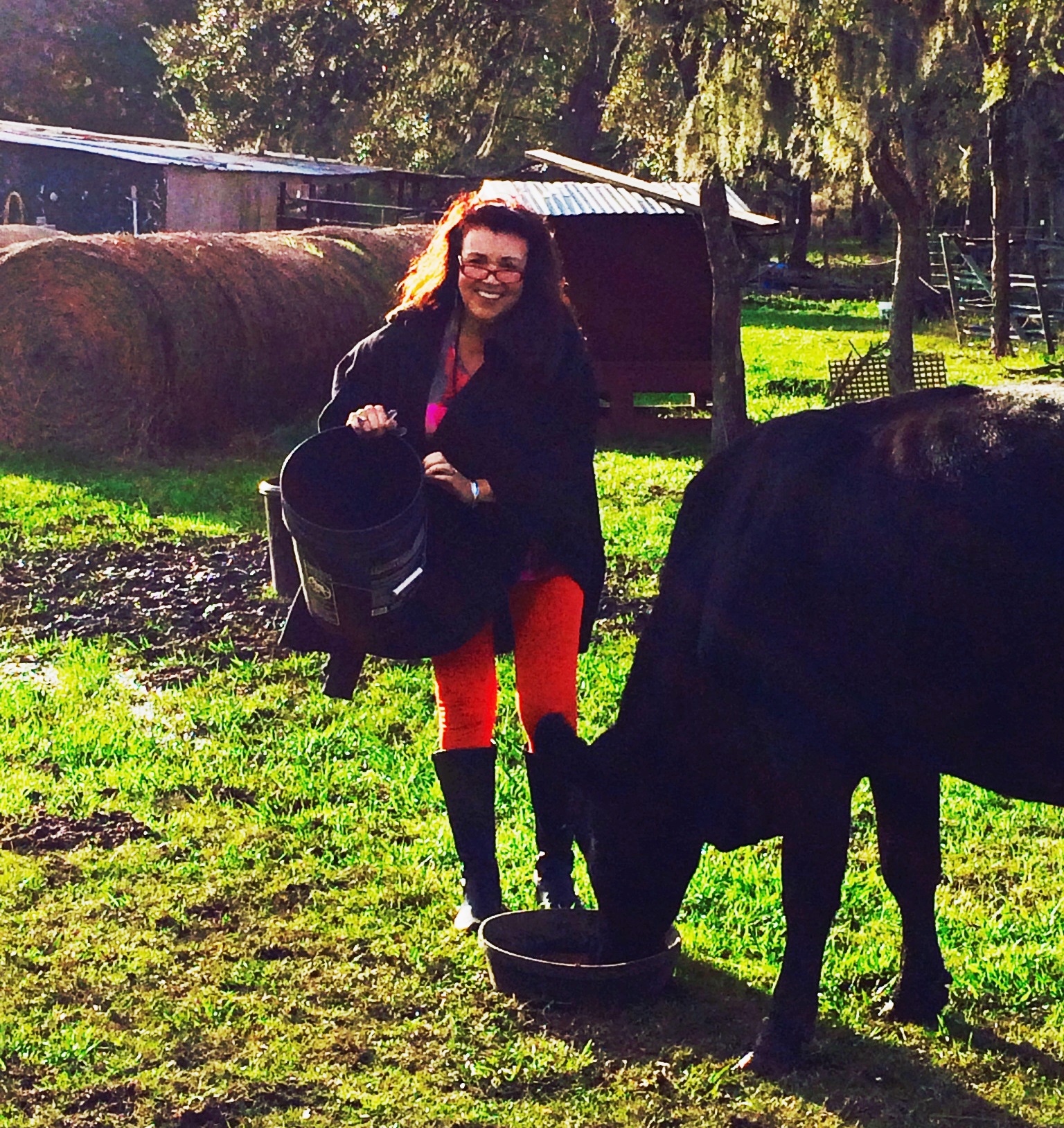 “My hope is that people everywhere will learn that once you SEE these farm animals as individuals with rights to live just like us, that your heart will open,” Renee tells One Green Planet,” After all, when you look at the earth from the perspective of space, we are all ONE – the only thing that divides us as a species is human thought – and humans are the only ones that can think and feel us back to compassion. In the words of Ben Franklin ‘if everybody’s thinking the same way, nobody’s thinking.’”

We can all stand to join Renee and start thinking and changing.

You can help Renee make Rowdy Girl Sanctuary by making a donation to her IndieGoGo page, here. To follow the progress of her journey, like the Vegan Journal of a Rancher’s Wife Facebook page, here.