What a Blind, Senior Sheep Taught Me About the Complexity and Kindness of Animals 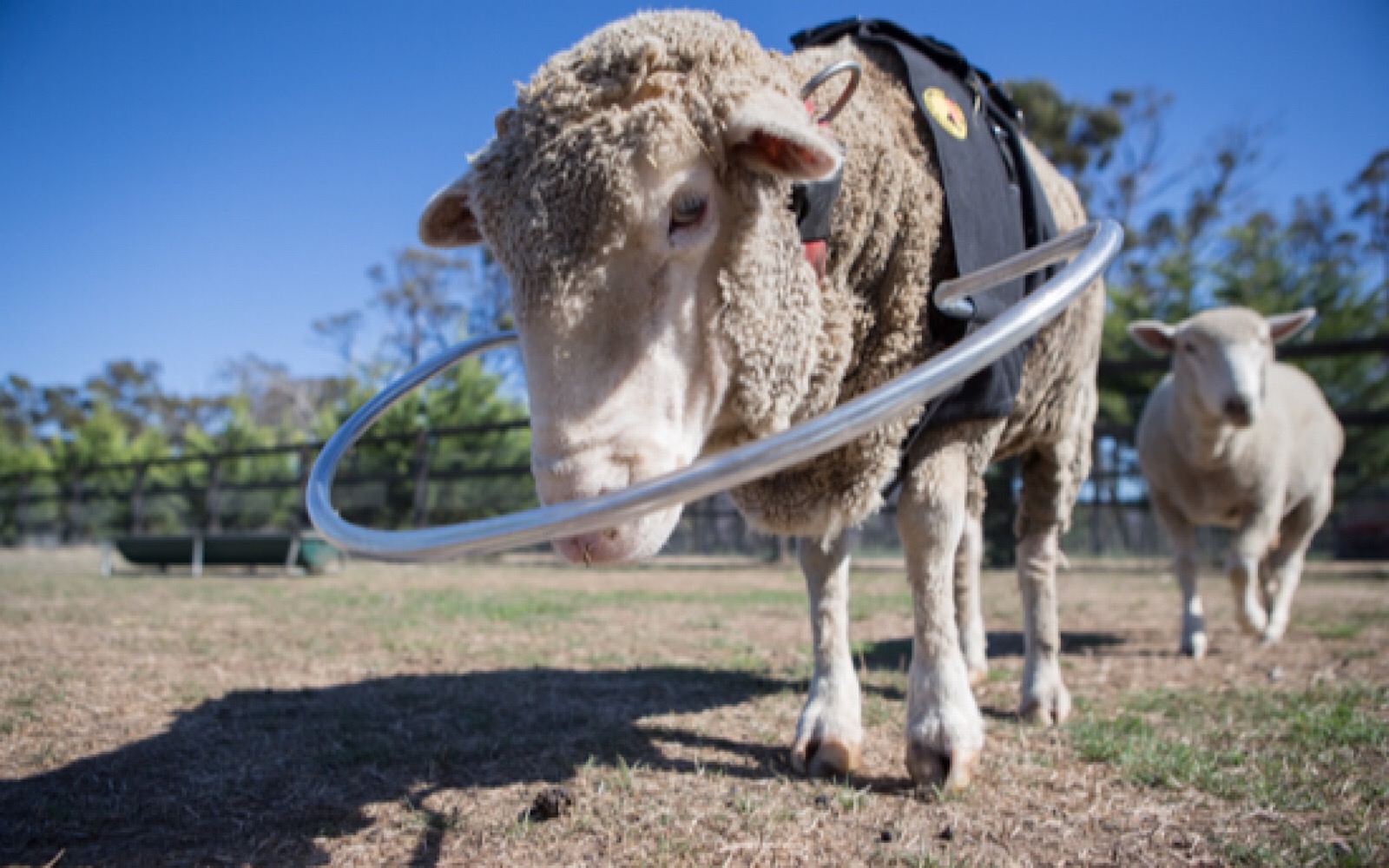 “Sixty-Four, is a name, not a number,” were the words I would offer to the many quizzical glances I was to receive when introducing folk to a gentle and handsome blind merino wether. Sixty-Four took his name from the Beatles classic, “When I’m 64,” a song written by a very young Paul McCartney, questioning whether he would still be loved when he reached the ripe old age of 64. 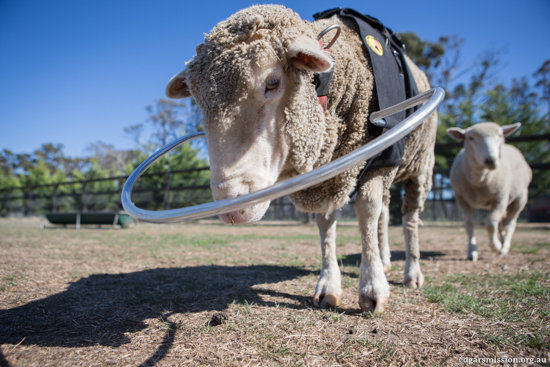 “Yes, I will,” were the very words I uttered when I learned of Sixty-Four’s plight and in response to the question of whether we would be prepared to take him (and the challenges of caring for a blind wether) on. You see, Sixty-Four had been found wandering aimlessly about the side of a rural country road when he was reported to animal control officers and taken to the local pound. Generally, sheep found in such circumstance would have been sent to the sale yards. Seeing Sixty-Four’s blindness matched by his ability to survive in a world of such obstacles, the officer determined the stoic old gent deserved a change of fortune. 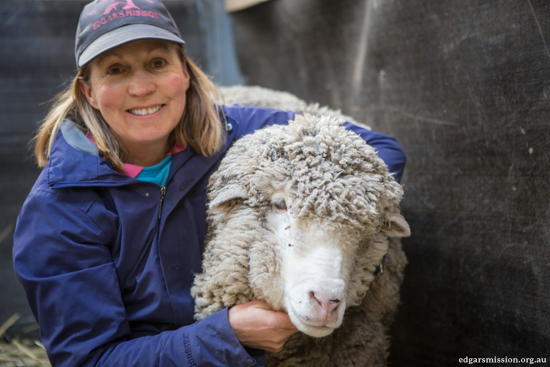 I will never forget how frightened, confused and nervous dear Sixty-Four was the first time we met. Expecting to bump into everything whenever he took one of his timid steps, he would quickly retract his head in anticipation of the bump. However, just as I recognize we humans live in a world of possibilities, I believe animals should too. And so, I set about ensuring Sixty-Four could too, quickly establishing a routine for him and a flock he could call his own. His stall was always set exactly so — water bucket, hay feeder, mineral block, and feeding stations, with strict instructions these things were never to roam. But a life in a stall, no matter how grand, was not the life of possibilities I had promised Sixty-Four. The first step towards this life of independence came through a sheep ironically enough named Annabelle; with the addition of a small bell to her collar, she was to become both Sixty-Four’s eyes and soulmate.

Every day Sixty-Four was led from his stall, guided by both a human and his bell-tinkering friend, Annabelle, to his daytime paddock where he would roam. It was here he morphed from a frightened and lacking-in-confidence lad to one Weet-Bix loving sheep who learned many things, including his name; that the word “Weet-Bix” came followed by a delicious, tongue-smacking treat; and, of course, kindness. Sixty-Four and his stoic resolve to soldier on, long after his sight did not, endeared him to the hearts (and photos) of many. 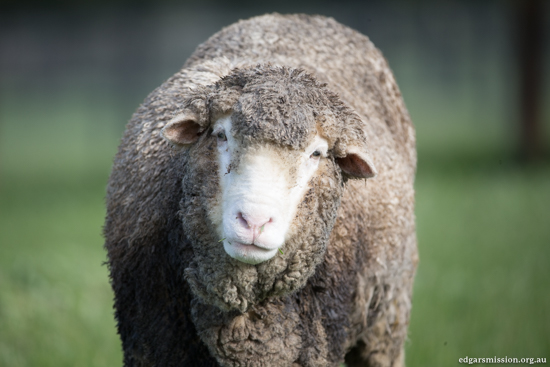 Amongst the many heart-warming memories of Sixty-Four, which I will cherish forever, nothing comes close to my most favorite. I call them my “Al Pacino moments,”* which came about when I led Sixty-Four back to his stall from one of the far-flung corners of his paddock to which he and Annabelle had roamed. Sixty-Four would look in my direction as I approached, calling his name, and as I dutifully placed a Weet-Bix between his lips (which had already opened in anticipation), I clipped the lead onto his collar and we both would run as fast as we could towards the gate, Sixty-four only slowing when I placed the slightest of pressure on his lead, instructing him to do so. Such faith he had in me, that I would never let him bump into anything, and that these would be the only moments in his life that he could run with wanton abandon, never ceased to bring a lump to my throat and pride to my heart — he believed in me, and I was never going to let him down.

But sadly, the only time Sixty-Four will now run is in my memories, as his behavior changed, telling us all was not well — a vet visit confirming our worst fears. And just as I have been making decisions each day on his behalf, on this day I was called upon to make a final, and most heartbreaking, one. It was a decision made somewhat easier by the knowledge that I could no longer provide my woolly and wise friend with that life of possibilities I had promised. And as his human folk grieved for his loss, we knew this grief was not solely ours; as Annabelle took her last sniffs of her companion, she let out the most heartwrenching of “baas,” which would echo out the next day as she slowly came to terms with the reality she would never again see Sixty-Four. 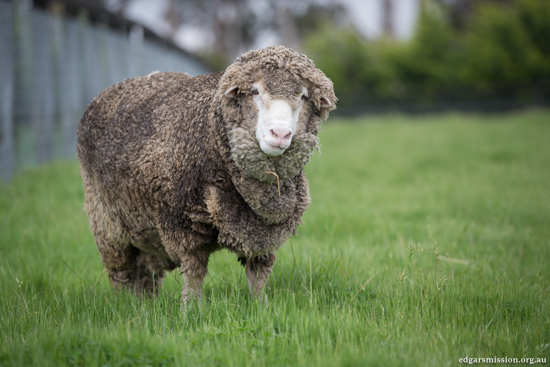 All of our animal friends who pass leave an indelible hoof, trotter, or claw print on our hearts, but in Sixty-Four’s passing this is also true of our daily routine. Gone will be the daily sojourns of we and he, to and fro to his paddock, the happy voices from visitors as they call his name, offering one of his much-loved treats, and the sight of a blind sheep being ushered around his pasture by his devoted friend, Annabelle.

All beings — all animals, have inherited a vast array of emotions from our ancestors, including grief; emotions give meaning to our world, help us navigate through the many challenges of daily life and ultimately ensure our survival on this planet. When you wrap your head and heart around this idea, you come to realize the ever-present need for we humans to ensure our circle of compassion is extended to include all animals. If ever in doubt, please think of a kindly sheep named Sixty-Four and the amazing life he was to ultimately find. 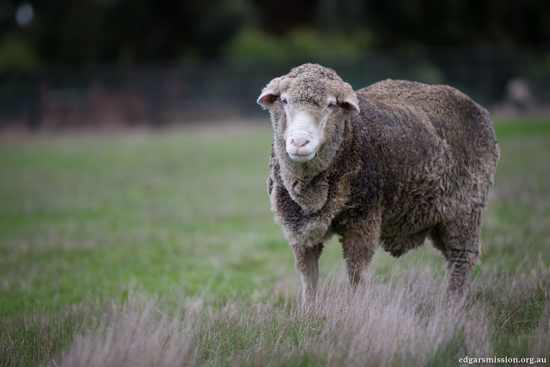 *From the scene in Scent of a Woman, where the blind Frank Slade, played by Al Pacino, commandeers a brand-new Ferrari that had been driven by young Charlie Simms (Chris O’Donnell), driving it at break-neck speed towards a bridge, with Charlie being his “eyes.”