Beware! The Dark Truth Behind Guruvayur Elephant Sanctuary in India 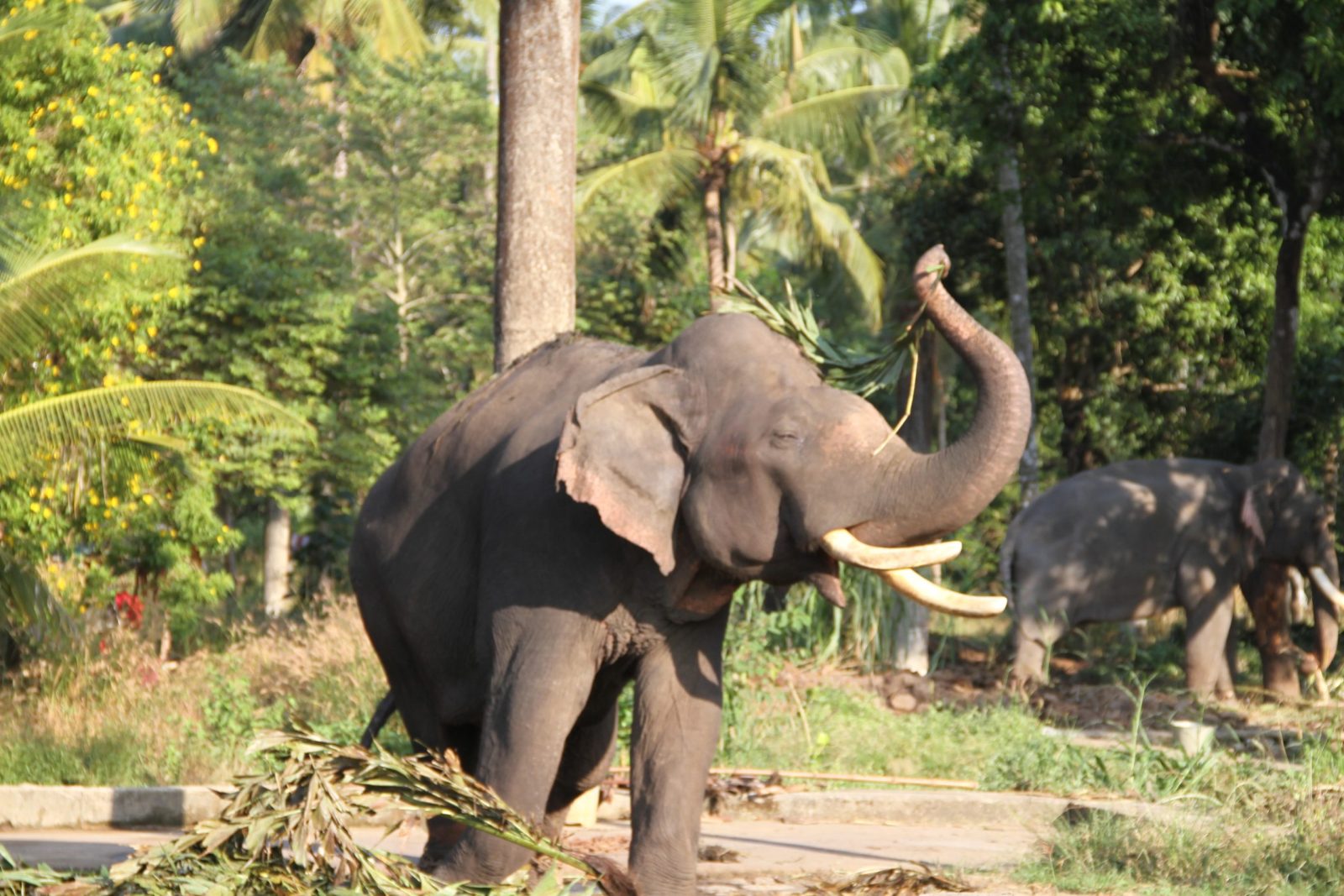 “Fifteen Hundred captives were cooped up in a shed built to accommodate probably 200 at the most. We were cold and hungry and there was not enough room for everyone to squat on the bare ground, let alone to lie down. One five-ounce piece of bread was our only food in four days.”

A holocaust survivor, Dr. Viktor Frankl, painstakingly chronicles this horrific scene at the Auschwitz extermination camp in his book, “Man’s Search for Meaning“. He recalls the Nazis captured approximately 1.5 million people, mostly Jews, forced them to travel by train for several days and nights, then stuffed them into a tiny room, with nine prisoners sharing a bunker and two sheets.

A similar concentration camp for elephants exists in the southern Indian state of Kerala, where 45 captives are crammed into 12 acres of land. They are tethered beneath the scorching sun at 45°C, languishing in their urine and excrement, and deprived of their basic primordial needs. Most of them were illegally captured wild elephants from the northeastern states of Arunachal Pradesh, Assam, and Bihar, and sold to the Kerala elephant owners during the annual “Sonpur Mela” festival that takes place every November.

This is the world’s most notorious elephant prison, called “Punnathur Kotta,” aka the “Guruvayur Captive Elephant Sanctuary.” It is adjacent to the UNESCO World Heritage Site – the Guruvayur Temple. Tourists from around the world travel here, many having been led to believe that the elephants at this concentration camp are happy and well cared for. They are oblivious to the dark truth behind the shackled elephants and their weaving motions.

Although many reviews on Tripadvisor from local people glorify this “sanctuary,” the most recent post in November 2021 affords a one-star rating by a U.K. visitor. Entitled “Nothing but a prison for distressed elephants,” it paints the harsh realities that elephants suffer.

“Elephants are constantly chained, many by front and back legs simultaneously. Many are chained so tightly they can hardly move, others constantly rock and sway due to stress. Terrible to witness in the 21st century.”

In the wild, elephants wander across vast areas for hours on end, grazing on a wide variety of berries, barks, roots, leaves, fruits, grass, and even soil to obtain mineral supplements from the earth. They need to keep moving to balance their massive bodies. Socializing is a must for their sanity. Elephants also keep themselves busy, making tools and devising strategies when confronted by enemies.

Females socialize, with a wise matriarch leading her family, and fiercely protecting the young. In contrast, bulls form bachelor groups and join a female herd only during their annual musth cycle – peak mating period. During this time, their testosterone and energy levels surge. They are overwhelmed by the urge to mate. The bulls secrete musth fluid from their temporal glands, emitting a potent smell to attract females. It triggers the instinct to fight off the bulls. They deplete their surging energies by mating, fighting, and covering extensive distances.

At the Guruvayur concentration camp, however, the bulls are denied food, water, and shelter, so their energies will be depleted. Worse still, many elephants come into their musth cycle around the same time. The musth odor is even stronger as the bulls are tethered right next to each other. It’s hard to resist the urge to fight the neighboring bulls. Frustrated, these prisoners pull their chains that cut into their flesh, causing bloodied and swollen ankles.

Out of sheer desperation, many bulls have attacked their handlers, only for the torture to be intensified. One Kerala veterinarian alleges that the handlers toss rocks on the bulls’ genitals to inflict maximum pain in the most sensitive areas of their body and control them.

But the cruelest of all rituals awaits these bulls after their musth cycle. A group of 10 to 15 drunken men will beat the living daylight out of the bulls. This brutal practice is called “Katti Adikkal,” which means “tied and beaten.” It is driven by a misguided myth that elephants may have forgotten their commands during the musth cycle.

It’s also common practice to control every movement with a long pole stuck behind the bull’s ear, enforcing the so-called “freeze” position. If the bull moves too much, the pole will fall, and he will be punished. The atrocities meted out against Kerala elephants, including this prison, are exposed in Gods in Shackles.

With every single natural behavior suppressed, elephants are under chronic stress, displayed by swaying side to side, bobbing their head up and down, and even biting their trunk and trying to break the chains.

Dr. Jessica Bell Rizzolo, a trans-species psychologist and wildlife crime expert, explains in an interview with me that these symptoms are caused by years of abuse and lead to post-traumatic stress disorder (PTSD). Depravation of agency is among the critical factors that hinder brain development and exacerbate PTSD.

“So, if that elephant is unable to make basic decisions about his or her life, who to mate with, when to have social interactions with another elephant, how long to stay with the mother, that could really impact the right brain development.”

An elephant brain is three times as large as the human brain, with a highly evolved cerebral cortex. Dr. Bob Jacobs and his team have released shocking scientific research detailing the devastating consequences of unnatural and depleted environments on elephants’ brain structure and functions. Key points from “Putative neural consequences of captivity for elephants and cetaceans” include:

In the wild, it is normal for elephants to occasionally encounter predators such as humans and other carnivores, which triggers a brief increase in stress hormone levels. However, once the threat disappears, the hormones return to a normal level, allowing the body and brain functions to resume their natural state.

But in this concentration camp, elephants are under chronic stress. Despite obeying the commands of the handlers, the elephants are constantly whacked with vicious bullhooks and poked with long poles as a constant reminder that their masters are in control.

One video of a helpless elephant being chained and beaten ruthlessly by a group of men, as hundreds of others simply watched this heinous brutality, went viral on social media. This bull had killed his handler, and apparently, the men were teaching him a lesson – never to mess with them.

The prisoners at the Auschwitz camp suffered a similar fate: “Beatings occurred on the slightest provocation, sometimes for no reason at all… We heard the lashings of the straps and screams of the tortured men. At such a moment it is not the physical pain which hurts the most, it is the mental agony caused by the injustice, the unreasonableness of it all… The most painful part of beatings is the insults which they imply.”

Is it even conceivable that the bull who was being beaten in front of hundreds of people felt the insults and shame? Many neuroscience and psychology studies on elephants reveal that elephants are highly intelligent and emotional animals. They display empathy not only towards their own kind but also other species.

It has also been demonstrated that elephants have their own culture, and they observe rituals, for instance, a grieving ritual, when they encounter the skeletal remains of other elephants. They pass social information through generations. They have strong social bonds. So, by capturing elephants randomly and separating them from their herd, their culture becomes fragmented.

The Guruvayur concentration camp elephants conceal layers upon layers of trauma… and with no escape from the ongoing brutality and unpredictability, they seem to have just given up on life. Dr. Rizzolo says, “The trauma is such that the sense of self is impaired. That elephant doesn’t even have a sense of themself in relation to themselves and in relation to other elephants in relation to their herd… “If that normative social structure is ruptured on a larger scale. You see results of that just as you see in human cultures that have experienced trauma after trauma.”

At the Auschwitz concentration camp, Dr. Frankl observed similar dysfunctional behaviors: “Apathy, the blunting of the emotions and the feeling that one could not care any more, with the symptoms arising during the second stage of the prisoner’s psychological reactions, and which eventually made him insensitive to daily and hourly beatings.” (Pg. 23)

Knowing these psychological, emotional, and mental traumas caused by captivity, is it then moral or ethical to confine these sentient animals for human entertainment? The cultural and religious lobby groups will turn a blind eye and continue to justify their actions.

But we, the citizens, can create a groundswell of changes and instill compassion in the hearts of cruel human beings while creating a safe world for elephants. If you’re genuinely hurt and angered by the atrocities against elephants, here are nine things you can do right now:

Complacency and apathy have no place in an era confronting the sixth mass extinction. Asian elephants are vanishing at an unprecedented rate. With only 40,000 of them left on the entire planet and 27,000 of them in India, we need to do everything in our power to protect them in their last bastion. Only collectively can we end the suffering of elephants and foster compassion towards these majestic animals.