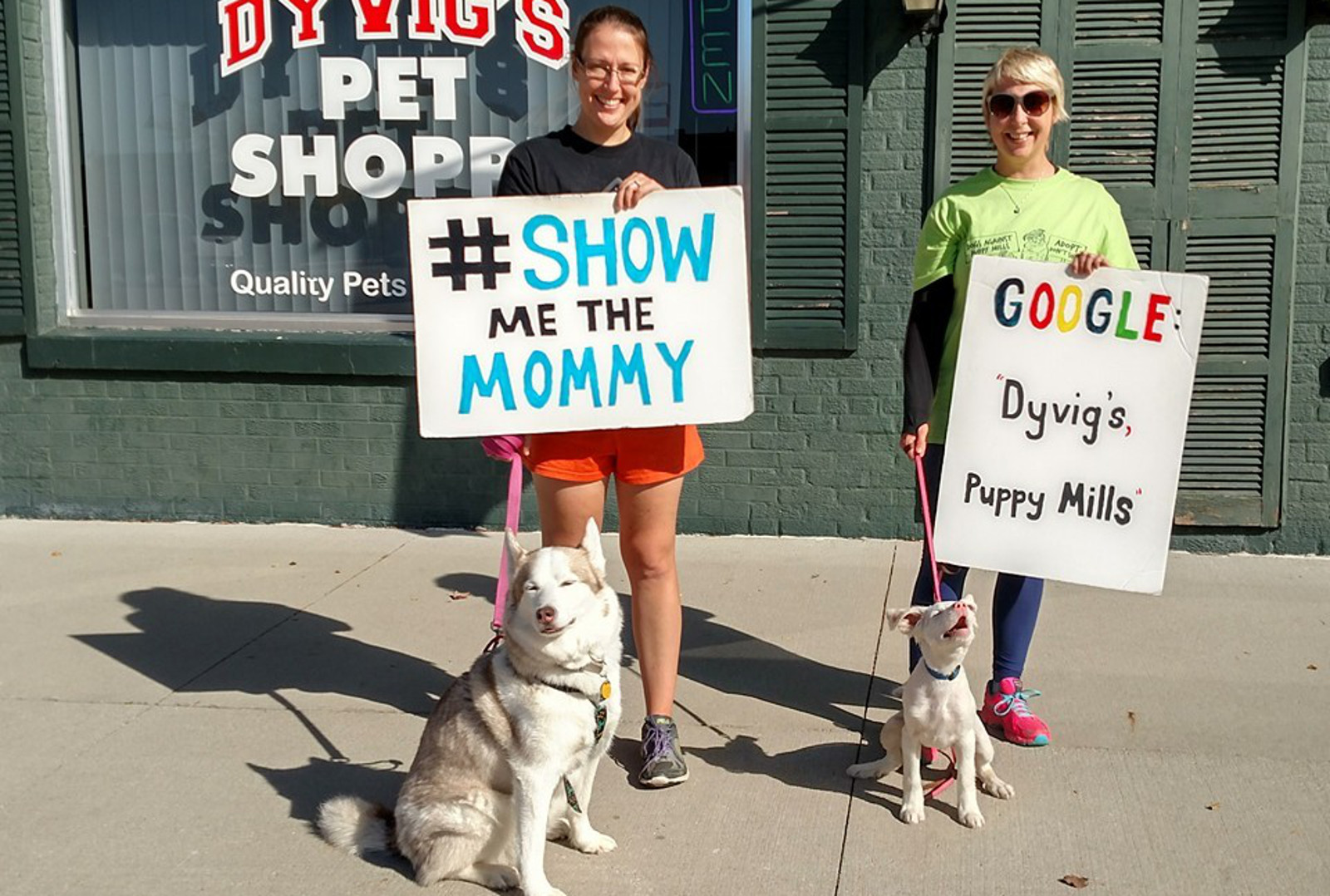 Five years ago, Mindi Callison, founder of Bailing Out Benji, learned that the owner of Dyvig’s Pet Shoppe in Ames, Iowa was getting the puppies he sells in his store from two large puppy mills. Reputable breeders would never sell their puppies to a pet store, yet consumers are often led to believe that stores get their puppies from small, local breeders. In most cases, that’s simply not true. Soon after, she began organizing peaceful weekend protests outside the store as a way to educate people in the community about puppy mills and encourage adoption.

Standing Up for Pups

After two years of holding protests every weekend, Bailing Out Benji increased their advocacy efforts even more by initiating a “30 Days, 30 Protests” campaign, which is held each September in honor of Puppy Mill Awareness Month. Staging protests outside the store at least once a day during the campaign has helped volunteers reach new people, including many of the 36,000 students and numerous faculty from a nearby university – many of whom had never heard of puppy mills, or that most pet store puppies come from these inhumane breeding facilities. “Our volunteers came before work, after work and even on their lunch breaks to help educate,” said Callison. “We all have full-time jobs or are students, so we really make time to be a voice for these dogs.”

This past September, the organization held 44 protests in 30 days, which is simply amazing – and inspiring. Their anticipated presence, which is always peaceful and respectful, even resulted in Dyvig’s closing their doors for business on a few occasions. 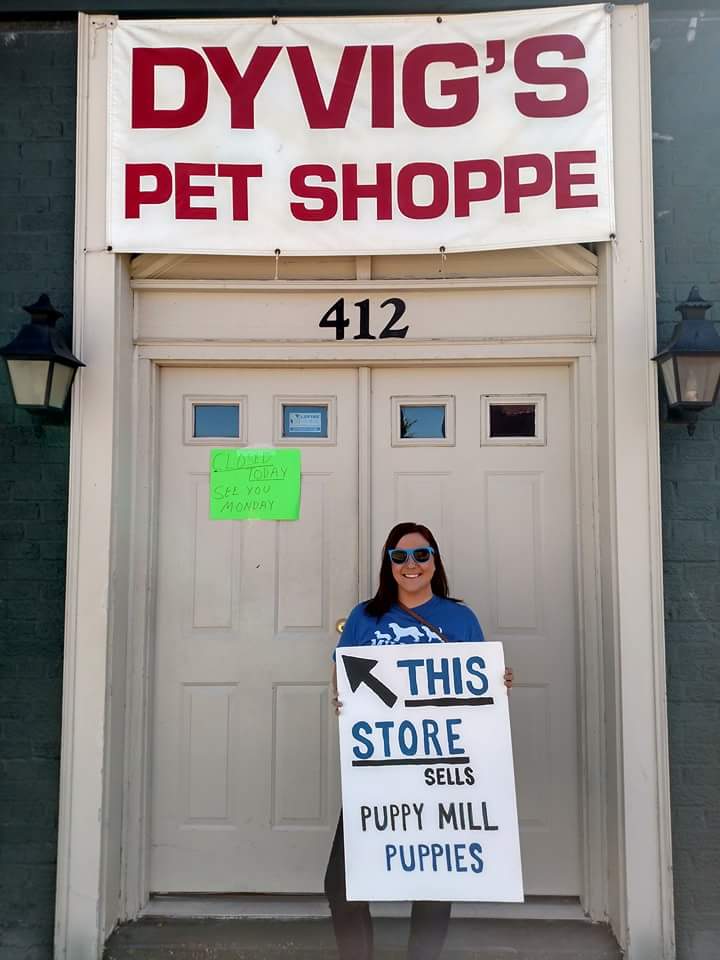 In addition to educating the public, their protesting efforts have brought together people who share a common passion. On National Puppy Mill Awareness Day, the group had 30 protesters participate. Amy Laube, a volunteer for Bailing Out Benji, shared her experience that day. “We had five people join us for the first time that traveled from all parts of Iowa because they saw our efforts on Facebook. We had a few special dogs join that day too. And [we] made the local news because of our efforts,” Laube continued.  “But my favorite part of the day was seeing so many different people come together for the puppy mill dogs. We may all have different ideas, work for different rescues, go about things in different ways but on days like PMAD we were all united for the dogs.”

The protesters have encountered some less-than-polite people over the years, but overall, the feedback from the community has been positive. “The honks, waves and ‘thank-yous’ we get are really what keep us going on the extremely hot and cold days,” said Callison. And their efforts have reached people beyond the community as well. “In one case, our volunteer Nathan Arentsen recalls educating a father and son, who were from another country, about the puppy mill problem and its connection to pet stores,” said Callison. “After hearing about how this is a global issue, both men agreed that adopting a dog was a much more humane option than supporting a puppy mill. Thankfully, this happens almost every time we protest!” 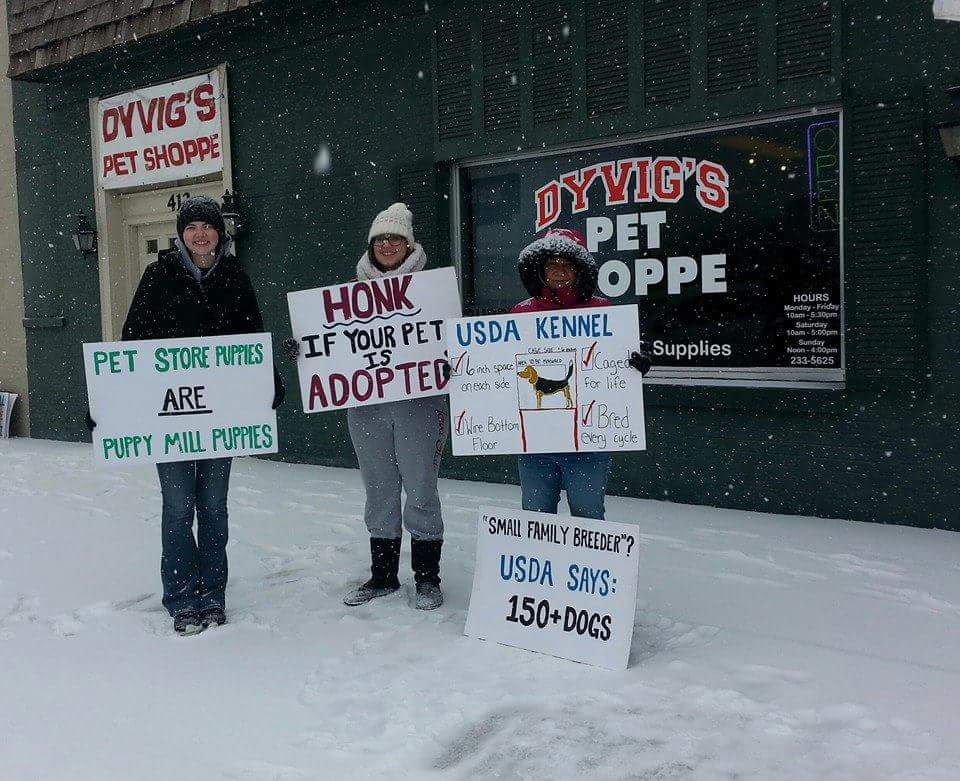 Over the past five years, the organization has held over 800 protests outside of Dyvig’s – and their hard work and dedication is paying off. According to Callison, the two puppy mills Dyvig’s sources its puppies from have gone from having over 400 breeding dogs each, to having about 150 breeding dogs each. That’s incredible progress! The store itself has also experienced decreased sales, meaning more people are opting to adopt instead of supporting puppy mills. “Through our protest efforts, we have educated thousands of people about where the puppies in pet stores really come from,” said Callison. “We have also helped so many pets find their forever homes after speaking with families who were looking to bring a new pet into their lives.”

Bailing Out Benji’s next campaign, “12 Protests of Christmas,” will occur around the holidays, a time of year where puppy sales skyrocket due to people wanting to surprise loved ones with a cute, wiggly puppy. Until then, they will continue their weekend protests at Dyvig’s and two other pet stores in Iowa. “The ripples of our efforts can’t ever be truly felt,” said Callison, “but we know in our hearts we are giving a voice to the invisible puppy mill dogs in the best way possible.” 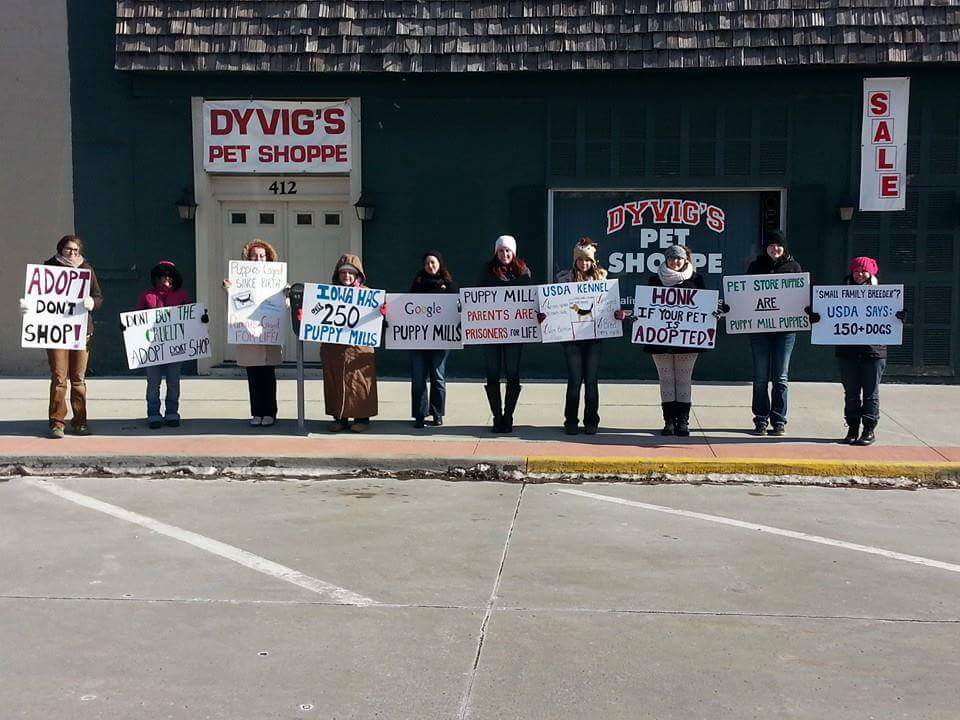 You can help be a voice for dogs in puppy mills by participating in peaceful protests in your community. Check with your local animal welfare groups, or check out this list on Bailing Out Benji’s website to find protests in your area. You can also help say “no” to puppy mills by only shopping at stores who don’t sell live animals, or who only feature animals from local shelters and rescues. By educating people about puppy mills and encouraging adoption, fewer people will purchase from pet stores, leading breeders to produce fewer puppies, which will eventually cause puppy mills to go out of business. The determination of organizations like Bailing Out Benji are proof that success is possible.

All images source: Bailing Out Benji/Facebook