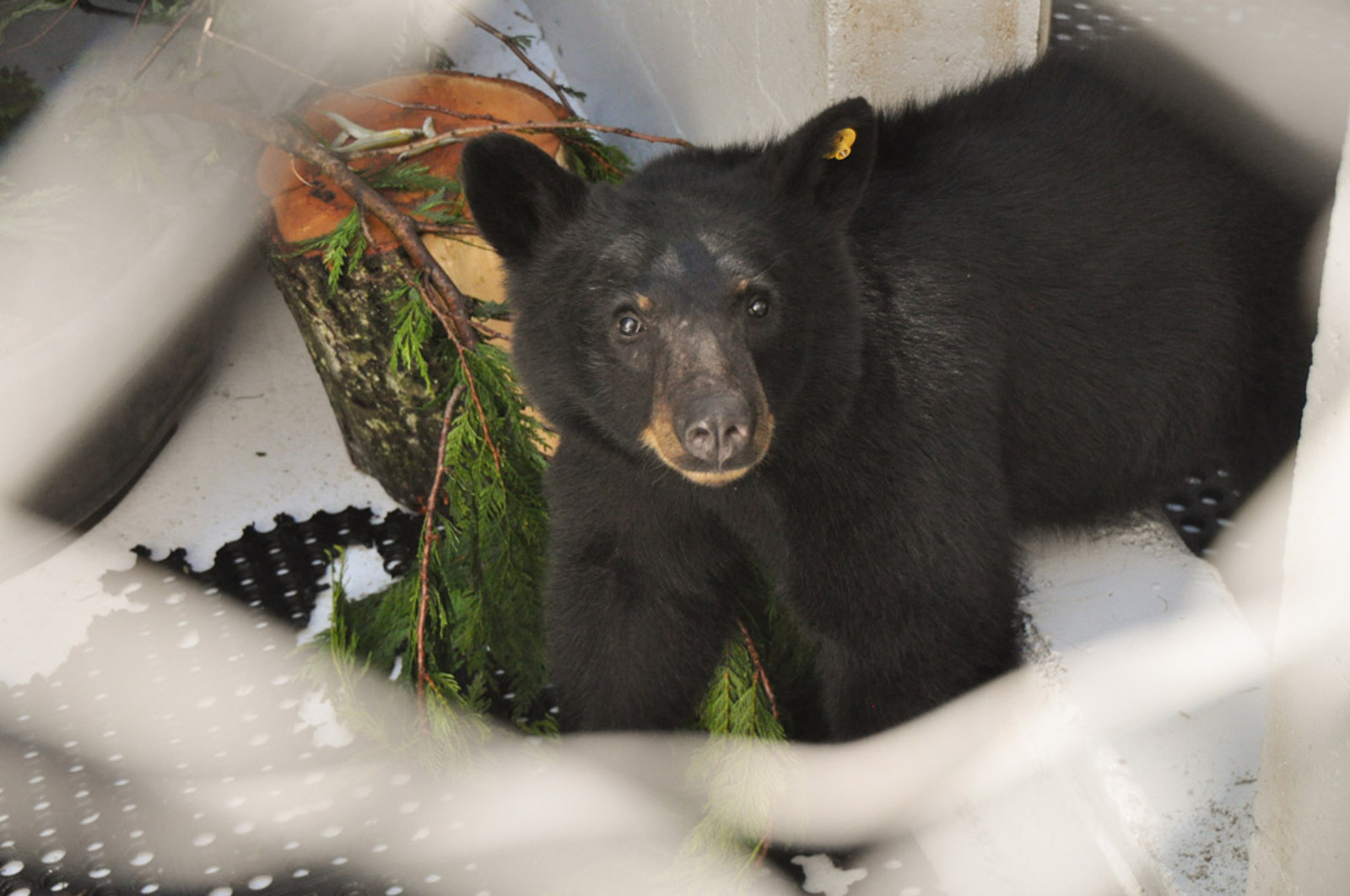 It’s a classic plot for an angst-y “coming of age” film: a teenager gets into trouble and is apprehended by authorities in the midst of a minor, if not “thrilling,” crime and is set on a journey to turn his life around. Except for this story, the protagonist is less Jesse from Free Willy and more … well, a teenage American Black Bear.

When the Washington Department of Fish and Wildlife discovered this rough and tumble bear, she was terrorizing a neighborhood, digging through garbage cans and breaking into bird feeders. But like all good misunderstood heroes, this bear’s actions were the result of troubled background. Authorities believe that this young bear was orphaned early in life and had not yet learned to survive in the wild on her own. Digging through garbage and eating birdseed were the only way the poor bear knew how to feed herself. After being stamping her with the status “failure to thrive,” the bear was sent to PAWS Wildlife Hospital.

The primary goal of the PAWS Wildlife Hospital is to heal their patients and reintroduce them to their natural habitat. Because of this, they don’t give the animals they care for names. Instead this recently rescued bear was dubbed, American Black Bear #2014-1317. After running the initial vet examine, it seemed that this bear had come to PAWS just in the nick of time. 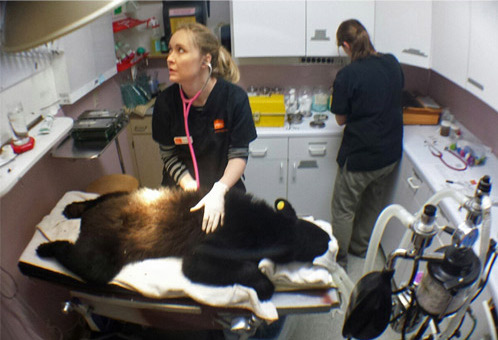 Weighing in at a measly 66 pounds and her claws were frayed from digging through metal bins. They estimated that the bear hadn’t eaten for two days and the diet she had managed to scrape together was not fit for a growing black bear. 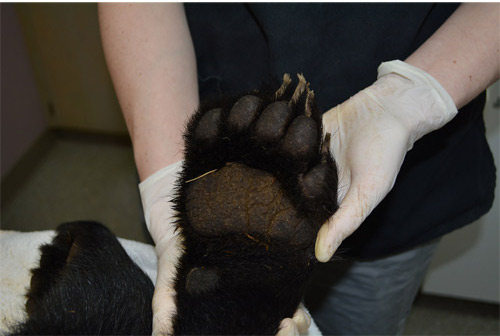 A typical black bear cub is weaned after six to eight months, but can spend a year after this learning to forage in the care of their mothers. This bear was around one year old (early teen equivalent in bears) and it is likely she had not yet mastered the art of independent survival, hence why she turned to human food.

In the region where this bear was found, human development has cut far into the natural habitat. Kellie Benz from PAWS explains, “Washington State’s American Black Bear populations are being edged further and further out of the habitat they have always roamed, and the transition hasn’t been easy.”

While the issue of space for the bears is of one concern, another is the creation of “unnatural food opportunities.” After all, why spend hours foraging in the woods when there is a plethora of human food waste just calling to be eaten?

As Benz states, “A fed bear is a dead bear is a reality for American Black Bears.” Despite their appetite for human cuisine, these bears are still dangerous and interactions with humans often end fatally for trespassing wildlife.

But PAWS was determined to not let this be the future for American Black Bear #2014-1317, “As PAWS medical staff prepared to sedate her (for a full exam), her low growls and lunging proved she still had a lot of wild in her.”

Once the sedative wore off, American Black Bear #2014-1317 began her journey towards recovery.

The first step to rehabilitating the bear was to get her used to eating the native foods that she would naturally forage for. In order to maintain their distance and keep this young bear from forging a bond with her caretakers that might inspire her to seek out humans when released, every effort was taken to achieve minimal contact with American Black Bear #2014-1317.

At meal times, PAWS staff would deliver food without saying a word to the bear. When it was time to clean the enclosure, the bear would be transferred to another location. While this not might seem like the conventional type of “love” you would give to an ailing animal, this is the best way to ensure that she would be able to successfully thrive one day in the wild. 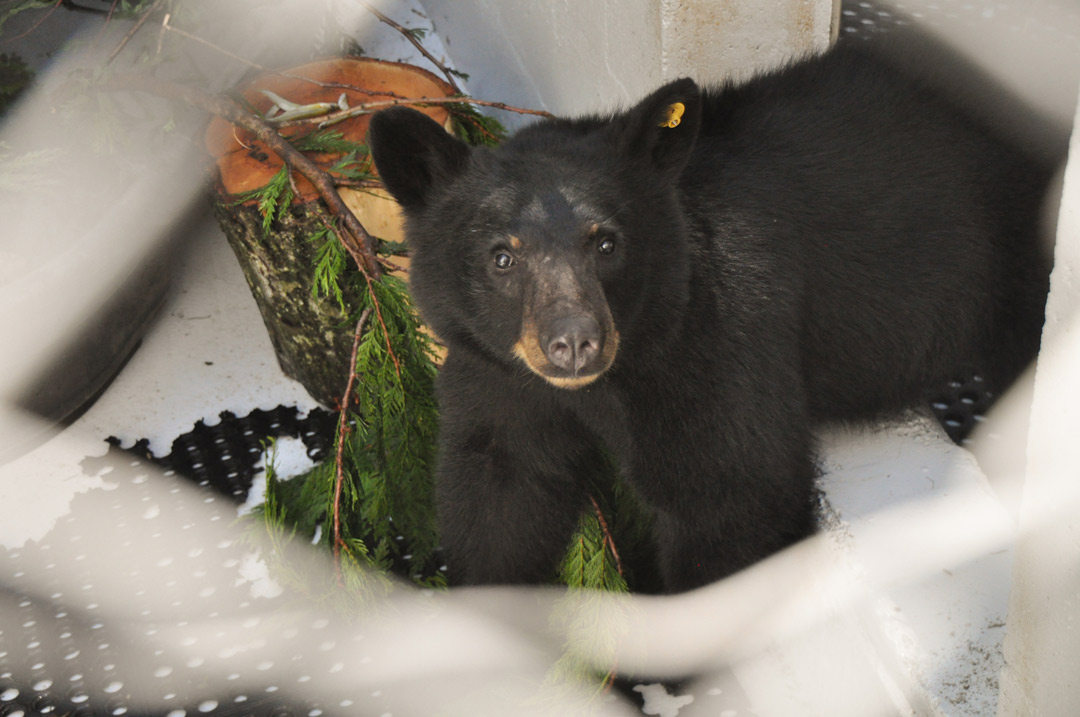 And thankfully, it worked! After about a month, the bear had gained 20 pounds and a ravenous appetite for bear-friendly foods. American Black Bear #2014-1317 proved to be a curious and adventurous charge, “with a preference for long branches with leaves and buds and fruit to discover along the way.” 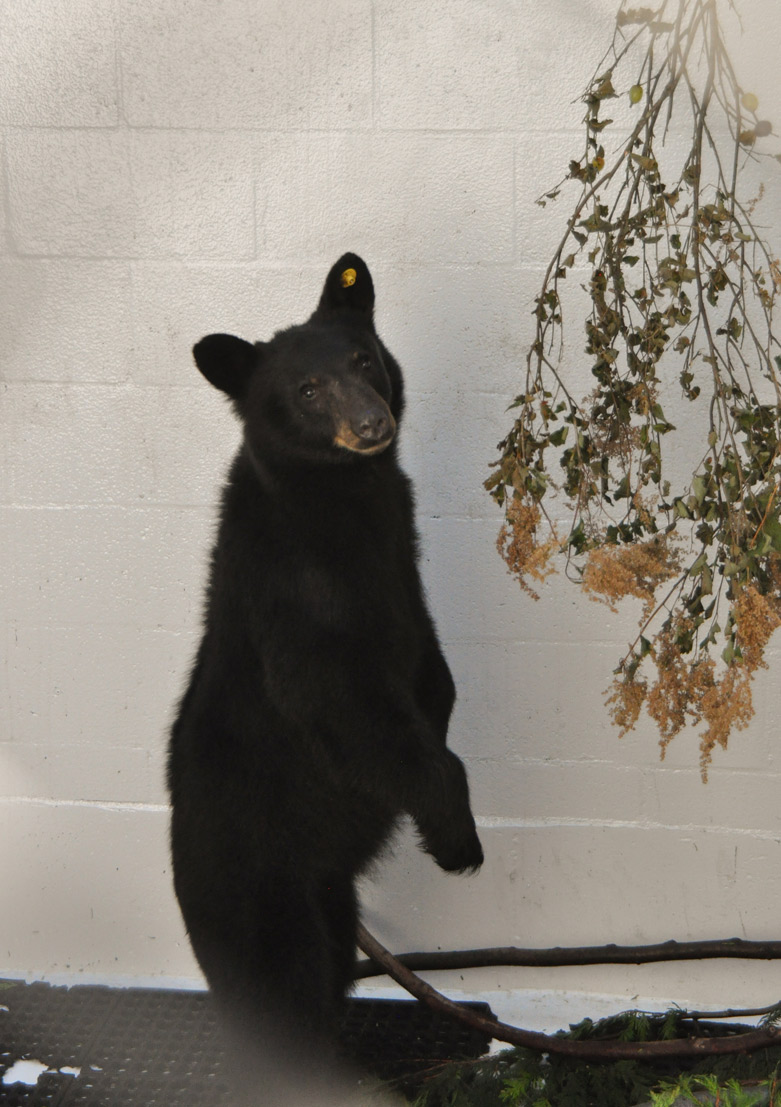 The only item that she did not care for was radishes … frankly, we can kind of understand that. But it was growing more apparent that with a bit more time she would soon be ready for release.

When the time finally came for American Black Bear #2014-1317 to return to her wild roots, the PAWS team was both excited and a little sentimental. Benz explains, “A wildlife release is the best part of a PAWS patient story, however bittersweet, but always rewarding.”

At her final weigh-in, this revitalized bear tipped the scale at a whopping 151 pounds, a huge improvement over her original condition. The wildlife officers who had brought her into PAWS a mere three months prior returned to retrieve her for release. American Black Bear #2014-1317 would be released back into the wilderness where she was born, except this time she would be placed deep in the woods far from human civilization. 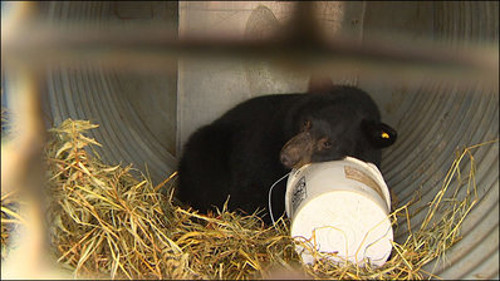 The bear was sedated, placed into a waiting enclosure and the team was off to the woods. The journey into the woods was a little bumpy, but it was worth it in the end when the door to American Black Bear #2014-1317’s enclosure was finally opened. 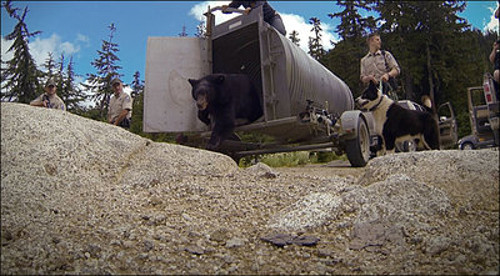 And just like that, our heroine is set back on the right path and headed for a happy, healthy life where she will live like any American Black Bear should: wild and free! 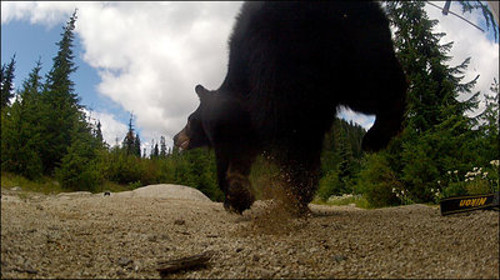 To learn more about the amazing work done by PAWS, check out their website and Facebook page. To make a donation to help them care for other wildlife in need, click here.