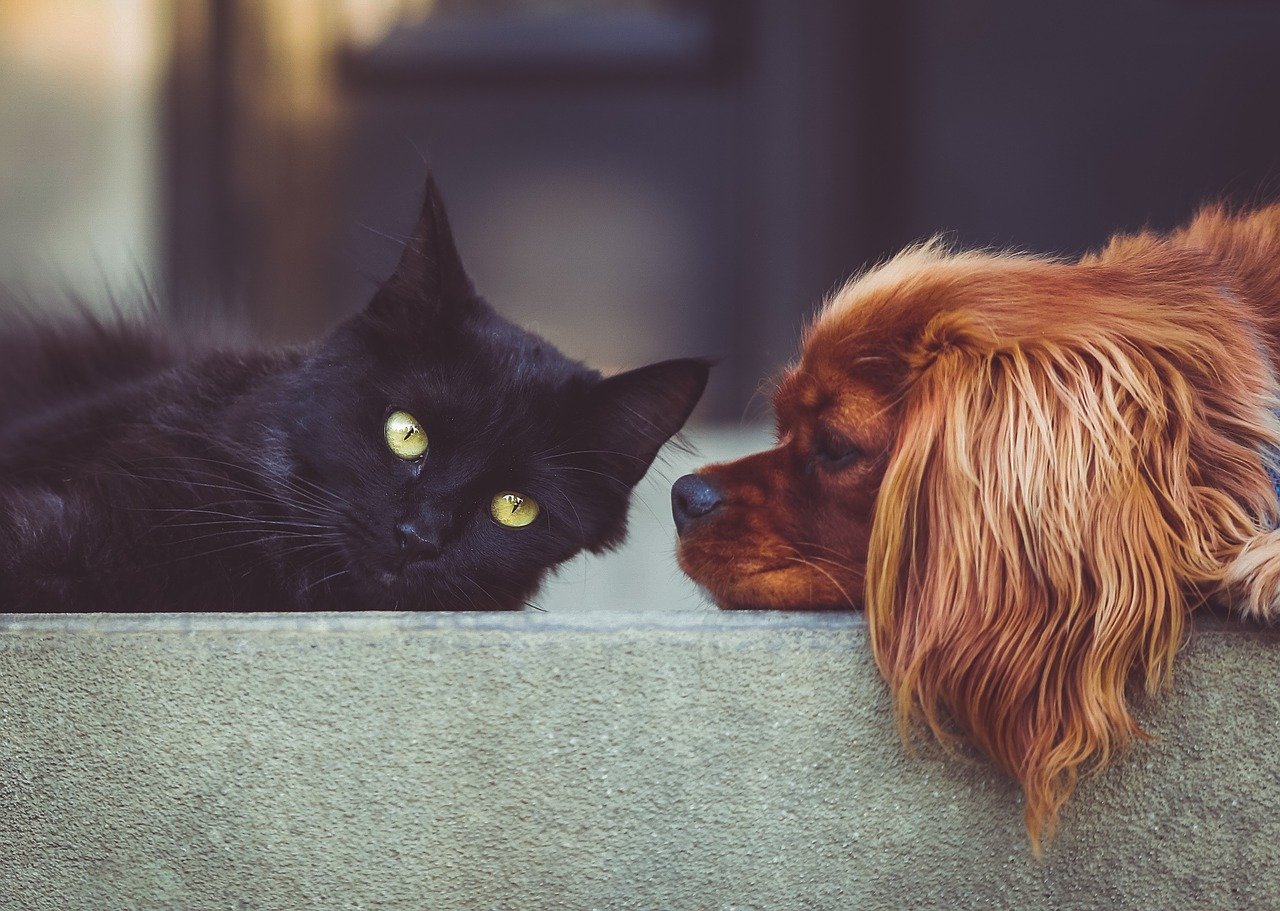 Adopting a pet is always admirable and compassionate. However, most adopters seek out young, healthy animals. While this is understandable, unfortunately, these standards often leave seniors and special needs animals behind in shelters. Anyone who has adopted a senior or special needs pet knows that just like any other companion animal, they just want your love and attention. If you need more proof, check out these 10 examples of “less adoptable” pets who finally found their forever homes!

1. Pirate the Senior Dog Spent 7 Years in a Shelter Before Finding the Perfect Home

Like many senior dogs, for years Pirate was overlooked in the animal shelter. Most adopters favor puppies so the longer Pirate sat in the shelter, the more “unadoptable” she became. That is until Jennifer Hunt came across Pirate’s pictures while looking at the shelter’s website. Before Jennifer came to meet Pirate, the shelter workers were convinced Pirate was just “getting tired of life.” After so many years of living in a shelter with no home of her own who could blame her! Luckily with Jennifer’s love, Pirate felt welcomed into her home and began to show a “totally new side of herself.” She went from being a dejected long time shelter resident to one of the happiest dogs Jennifer had ever seen! Just like any puppy, senior dogs want love and attention and can be just as playful companions.

2. Jambo the Senior Cat Got to Live Out His Bucket List

Much like senior dogs, senior cats are often passed up in favor of kittens. But when Holland and Max of Cat Castle NYC learned that 15-year-old Jambo’s owner could no longer take care of him, they rescued him without a second thought! Soon after they took Jambo in, he became very ill and was diagnosed with cancer and kidney disease. Fortunately, he responded well to treatment, and this whole process bonded Holland and Max to him even more! The pair ended up adopting Jambo and sharing his story on Instagram, even giving him #JambosBucketList to document all the adventures they had together. Because of Holland and Max’s kindness, this kooky senior cat was able to live out his life filled with love and travels! Be sure to check out Cat Castle NYC for more heartwarming stories like Jambo’s!

3. Monstro the Goldfish Miraculously Changed Colors After Some TLC

When Monstro the 10-year-old goldfish was returned to the pet store, everyone thought he was on his deathbed. However, one anonymous sculptor decided to take in the fish and nurse him back to health. She began by creating a hospital tank for him to regain his strength and heal. Since the fish was receptive to this treatment, she put him in a large tank with other fish friends. That’s when she began to notice Monstro grow very large and change colors from black to orange and yellow! Many people don’t understand how complex fish are! Fish can feel depressed when their environments are too boring or they don’t have any fish friends to swim with. Fortunately for Monstro, he was rescued by someone with an open mind and a kind heart!

4. Jordan the Puppy Mill Rescue Loves Learning How to Be a Dog

When Releash Atlanta first rescued Jordan he didn’t understand even the most rudimentary things such as how to walk upstairs or play with other dogs – he would even sleep standing up because he didn’t know that he could lie down. Jordan was rescued from a puppy mill that held over 700 in tightly packed cages. Sadly, this practice is standard across puppy mills and many dogs suffer without being rescued. Although Jordan is still skittish and has a lot to learn about being a dog, fortunately, he went to his forever home with Ann and Kinney who are loving and understanding of his behavior. When Jordan was first rescued he wouldn’t walk on grass, but after a month at his new home, he grew to love running around and playing in the backyard with Ann and Kinney’s other dog Bella.

5. Mr. Belvedere the Feral Tomcat Gets to be a Kitten Again

When Lindsay Raturi found Mr. Belvedere living in a feral colony, she knew something was wrong. After consistently evading rescuers, finally, Mr. B willingly entered a trap, which Lindsay believes was his admission that he needed help. Not only was he FIV+, but he had a slew of other health issues such as mange and ear mites. Although he was resistant to Lindsay’s touch at first, he warmed up to her and began to show a more playful side of his personality. Despite being an estimated 10 years old, which is an anomaly for feral tomcats, Mr. Belvedere is as playful and cuddly as a kitten! When he was adopted into his forever home, he was finally granted the security and love he seemed to have been crazing all along! Mr. B is the perfect example to show that just because a cat is a senior or FIV+ does not mean they are any less playful and affectionate.

6. ‘Ugly’ Bridgette the Brussels Griffon Finds Someone Who Appreciates Her True Beauty

Bridgette didn’t leave the best impression on those who saw her. She was a cranky senior with a…unique look. But for Danielle Fredericks she was perfect! Danielle knew she wanted a senior dog and Bridgette’s kooky looks were just a bonus! When Danielle first adopted Bridgette she was an anxious senior dog who was still recovering from the trauma of being brought up in a puppy mill. With lots of patience and care from Danielle, Bridgette eventually came out of her shell. Now the two are inseparable! In fact, Danielle says Bridgette is better at detecting her moods than she is herself. Even though Bridgette had a tough life before Danielle, the two were able to overcome her past and form a strong and loving bond.

7. Hope the Tiny Turtle was Born with an Exposed Heart is Adopted by Large Man with a Big Heart

When Mike adopted Hope she was only about the size of a quarter. He heard about this tiny turtle with an exposed heart from a breeder and knew he had to take her in. Sadly, many bred animals are born with health issues like Hope. Fortunately, Mike took Hope’s care seriously. To avoid handling her delicate frame more than necessary he fed her with tongs and to keep her healthy and happy he made sure her tank had filtered water, a temperature monitor, and stimulating decor. Although Mike was worried when he first adopted Hope, he finds watching her grow “rewarding.” All of his effort paid off, as now Hope is happy and thriving!

8. Echo the Blind Beagle was Rescued from a Lab and Found the Perfect Forever Home

Like so many other animals, Echo was an unfortunate victim of animal testing. She was rescued from a laboratory by the Beagle Freedom Project and lived with her foster Hannah while they searched for her forever home. Beagles are among the most common types of animal-tested on and sadly, the product tested on Echo left her blind. While living with Hannah, Echo went from being skittish and anxious to wagging her tail at just the sound of Hannah’s voice! Even though the two grew close, Hannah was happy to send Echo to her forever home with Jenna and Jay. The couple gave Echo so many new experiences she couldn’t have even dreamed of – from hiking to going to the beach to meeting a turkey! Even though Echo required a bit more attention and care, the effort was worth it as now Jenna and Jay have a loving, goofy new friend!

9. Sofi the “Unadoptable” Mut Finds a Family a Thousand Miles Away Who Think She’s Perfect

Unfortunately for Sofi, the odds were stacked against her. She’s a black mut who likely suffered from distemper which caused her to have difficulty walking. The shelter workers were convinced she’d be one of the unlucky pups who’d spend her entire life waiting in vain to be adopted. But then a Dutch family fell in love with videos of Sofi online! Instead of turning their nose at her unique walk, one of the children thought it looked like she was dancing (seriously, I’m about to cry). The mother of the family traveled all the way from the Netherlands to Greece to pick up Sofi and they bonded instantly. Now Sofi has adopted dog siblings, a warm bed of her own, and the love of the family!

Lauren let Joe know straight away that if he wanted to date her, he’d also have to love her special needs cat Little. The ginger cat has a brain condition that makes him walk “wobbly” but Joe quickly became attached to this unique cat. From there, Joe became hooked! He wanted to save cats just as much as Lauren did. So the two adopted Mika, an eyeless tabby cat Joe found in the middle of the road. Next, they adopted Mac, who was born with a cleft palate which made him undesirable to most adopters. They thought their family was complete until they went to the shelter just to drop off donations and met Leela, a cat who looked just like Mac but was missing an eye – needless to say, the pair adopted her instantly. Next, Joe became attached to a blind kitten named Yoyo who was put on a “to be destroyed list.” Eager to save this tiny kitten, Joe stepped in just 15 minutes before he was set to be put down. Finally, there’s Selita, the gorgeous black cat who is missing her hind legs and tail. Vets believe Selita was run over by a lawnmower due to the evenness of the cuts. Despite her disability, Selita loves running around and playing! Lauren wants people to know that “not all special needs cats require work, they just require love,” and in their household, these cats clearly get all the love they need!

All pets are capable of forming strong, meaningful bonds regardless of their age or how they look. If you have the means, next time you want to adopt a pet, consider asking for the one who has been there the longest or the one who needs the most care. Sometimes these animals are the ones with the most love to give!