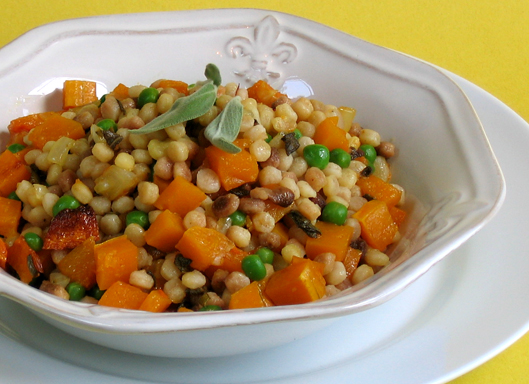 Like the cuisine of Sardinia itself, the unique tiny pasta known as fregula sarda may be one of the world’s best kept culinary secrets. Made from hard durum wheat, fregula (or fregola) is a traditional Sardinian pasta that resembles Israeli couscous—but that’s where the similarity ends. "> Fregula with Butternut Squash and Sage [Vegan] - One Green Planet
Food Monster App Tiny Rescue Shop Newsletter Support Us Cookbooks Petitions

Like the cuisine of Sardinia itself, the unique tiny pasta known as fregula sarda may be one of the world’s best kept culinary secrets. Made from hard durum wheat, fregula (or fregola) is a traditional Sardinian pasta that resembles Israeli couscous—but that’s where the similarity ends. Think of fregula as the heartier, more flavorful cousin of couscous. Fregula is rolled into rather large, irregular balls (when cooked, they are the size of green peas) and double-toasted, giving it a distinctive hearty, almost nut-like flavor. The toasting process also helps fregula hold up better than many other pastas and gives it a unique flavor and chewy texture when cooked. Its rough texture makes it ideal for absorbing the flavors of its surrounding broth or sauce. Fregula can be used instead of pasta in your favorite pasta recipes or cooked like risotto in a broth until tender. You can add it to soup, using it in place of orzo, rice, or barley. It can be combined with your favorite vegetables and herbs and served warm or cold. Consider tossing it with olive oil and fresh herbs for a tabbouleh-like salad, or top it with a savory stew as you would do with rice or couscous. Use it in a stuffing for vegetables such as bell peppers or squash. Essentially, most any way you already enjoy pasta, rice, or other grains, you can substitute this versatile ingredient to add an exciting new twist to your meals. Here is a recipe for my favorite way to enjoy fregula. Made with butternut squash and sage, this soul-satisfying dish also features saffron, another popular Sardinian ingredient, although the saffron can be omitted if you don’t have any on hand. Green baby peas add complementary color and a burst of sweet flavor. To transform this into a hearty one-dish meal, add 1 1/2 cups of cooked cannellini beans or 8 ounces of sliced, sauteed, vegan sausage. And if you can’t find fregula, don’t fret — this recipe is equally delicious made with your favorite pasta. I especially like using orecchiette.

Per Serving: Calories: 603 | Carbs: 99 g | Fat: 9 g | Protein: 17 g | Sodium: 77 mg | Sugar: 6 g Nutrition information does not include optional ingredients. Note: The information shown is based on available ingredients and preparation. It should not be considered a substitute for a professional nutritionist’s advice.

Robin Robertson has worked with food for nearly thirty years as a restaurant chef, cooking teacher, and food writer. A longtime vegan, Robin is the author of twenty cookbooks, including the best-selling Vegan on the Cheap, 1,000 Vegan Recipes, and Vegan Fire and Spice. Her new book is Quick-Fix Vegan. She writes the Global Vegan column for VegNews magazine. Robin’s website is: RobinRobertson.com