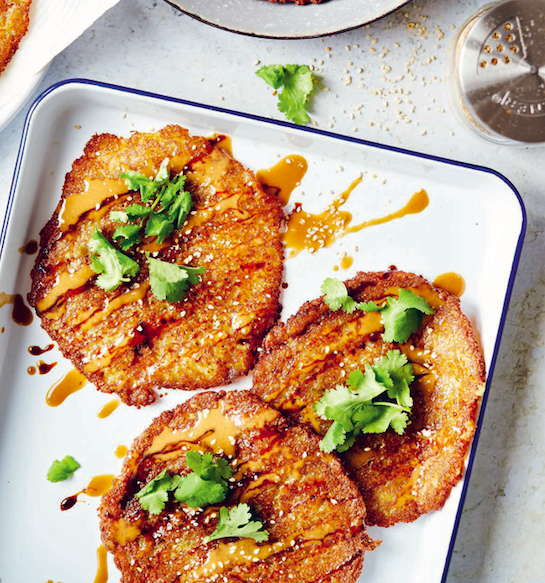 These tasty pancakes are inspired by Korean potato pancakes, which usually use potato starch, giving them a really nice chewy, gelatinous texture. If you’re not so fond of the texture, you can use cornflour instead of potato starch, which is more widely available. I find equal parts of each is a happy medium.

If you leave the batter too long, a black layer will form on the surface due to oxidisation. It isn’t at all harmful; you can simply scrape it o and use the batter without any concern. Kecap manis isn’t essential — especially for those who can’t eat gluten — but it does top these pancakes o. You can find it in Asian grocery stores and some supermarkets. (For gluten-free pancakes, use a gluten free kecap manis, which is sometimes labelled ‘sweet soy sauce’.) Potato starch is stocked by Asian grocers and many health food stores.

Olivia Andrews is the culinary director for meal-kit delivery service Marley Spoon in Australia and is an ambassador for Nutrition Australia's Tryfor5 campaign. She is the author of the internationally bestselling books Whole Food Slow Cooked and Healthy Thermo Cooking for Busy Families. She has worked for Feast magazine, MasterChef, and Destination Down Under.