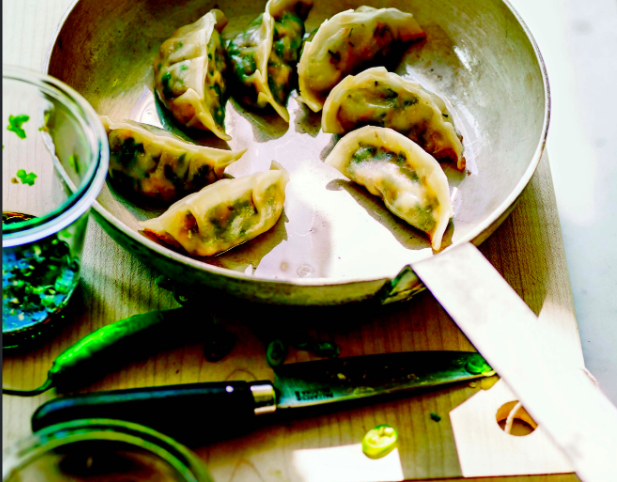 Dumpling-making, as with any fussy kitchen task, takes patience and probably shouldn’t be attempted during fraught moments. If you are reasonably dexterous, however, an army of plump beauties will be just reward for time spent pleating wrappers together.     Recipe from The Way to Eat Now: Modern Vegetarian Food © Alice Hart, 2016, 2017. Photographs copyright © Emma Lee, 2016, 2017. Reprinted by permission of the publisher, The Experiment. Available wherever books are sold. theexperimentpublishing.com

For the Dipping Sauce

For the Pot Stickers:

You can also use a soy-based salad dressing, minus the peanut oil, as a dipping sauce here, if you prefer.

Alice Hart—a graduate of Leiths School of Food and Wine and a longtime and accomplished food writer, food stylist, chef, and cookbook author—is a master at crafting seasonal vegetarian recipes, inspired by her travels around the world, that celebrate produce and other whole foods, as well as spices and herbs by the handful. The author of three previous cookbooks, her recipes and writing have appeared in The New York Times and many other outlets. Hart lives in the vegetarian-friendly seaside city of Brighton, in the UK.