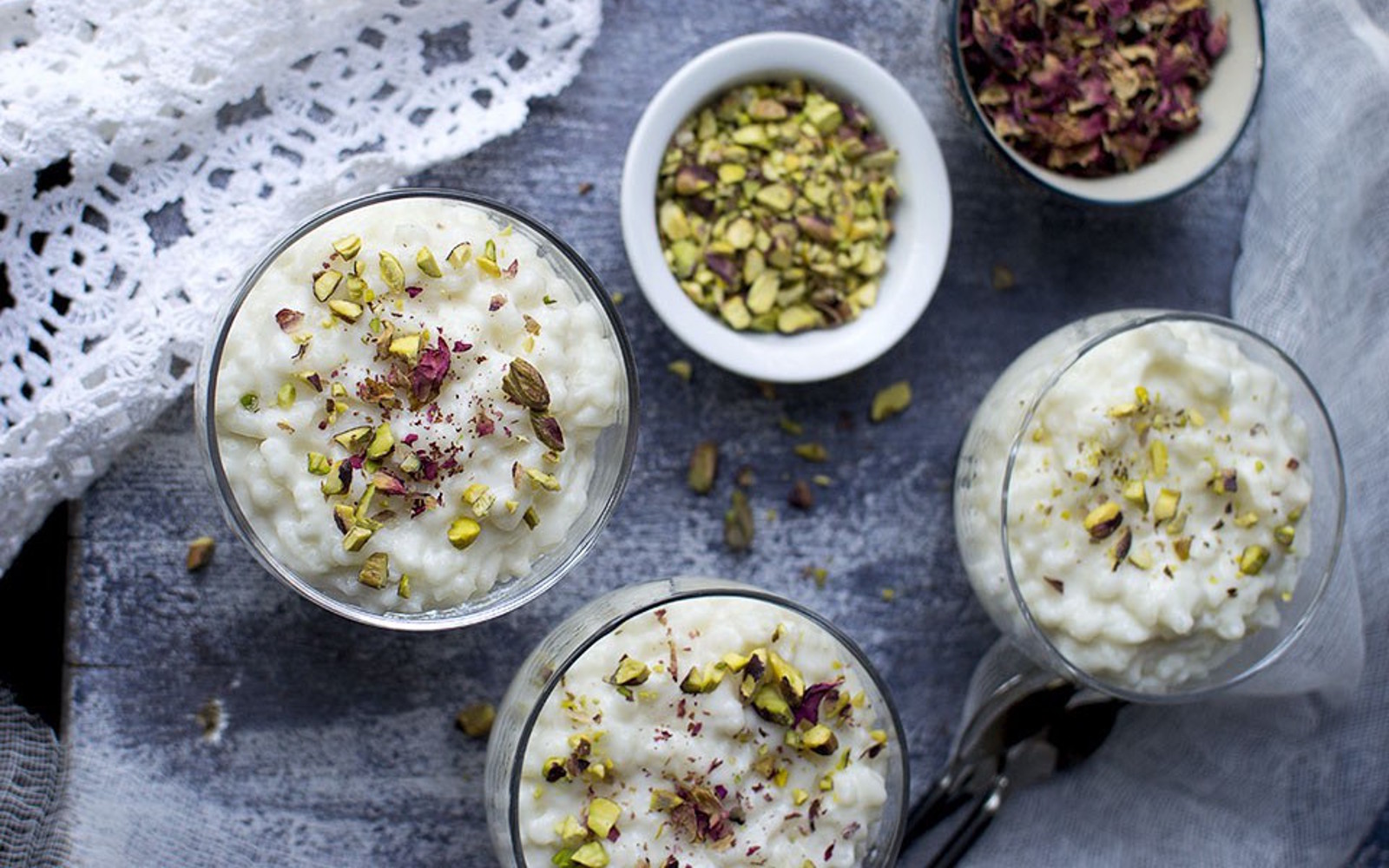 You might be used to enjoying rice in savory dishes, but in plenty of cultures, rice is also quite common in desserts. Rice pudding in particular, is a classic, delicious, creamy dessert. It’s usually flavored with cinnamon, but it can also be flavored differently as you’ll see in the various recipes below. We’ve gathered 15 dairy-free, vegan rice pudding recipes for you to give this delicious dessert a try.

We also highly recommend downloading the Food Monster App  — with over 15,000 delicious recipes it is the largest meatless, vegan, plant-based and allergy-friendly recipe resource to help you get healthy! And, don’t forget to check out our Pudding Archives! 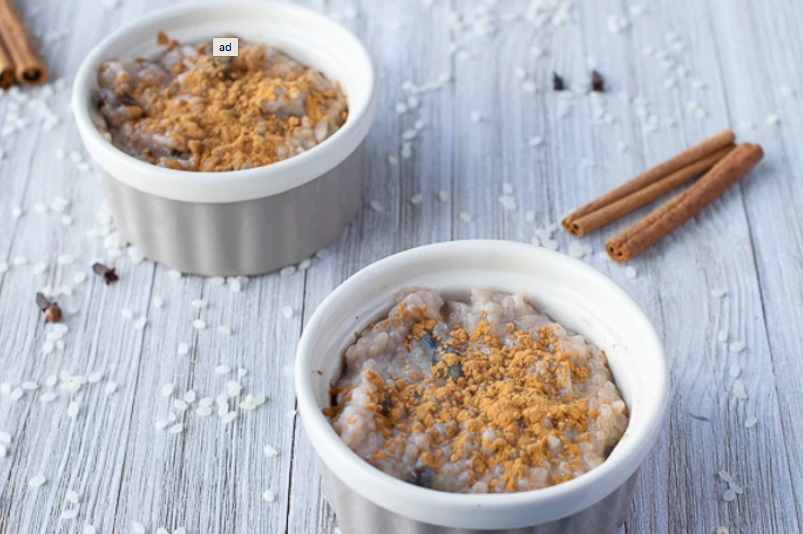 Arroz Con Dulce is the Latin version of rice pudding that’s usually made around the holiday season but you can really make it any time you have a craving for it. It’s normally made with evaporated milk but this recipe by Desiree Rodriguez calls for evaporated coconut milk making it completely dairy-free with just the right sweetness. You can eat it cold or warm. 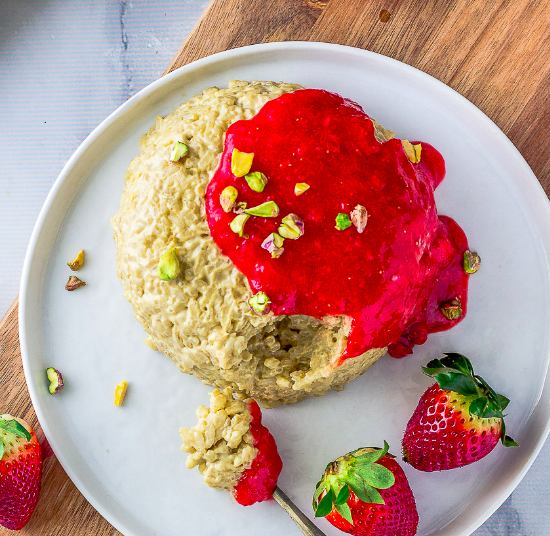 Your sweet cravings are kicking in again? Then make a big batch of this vegan Pistachio Rice Pudding by Melanie Jacobs. So creamy, sweet and delicious! Tastes best when served with fresh berries. 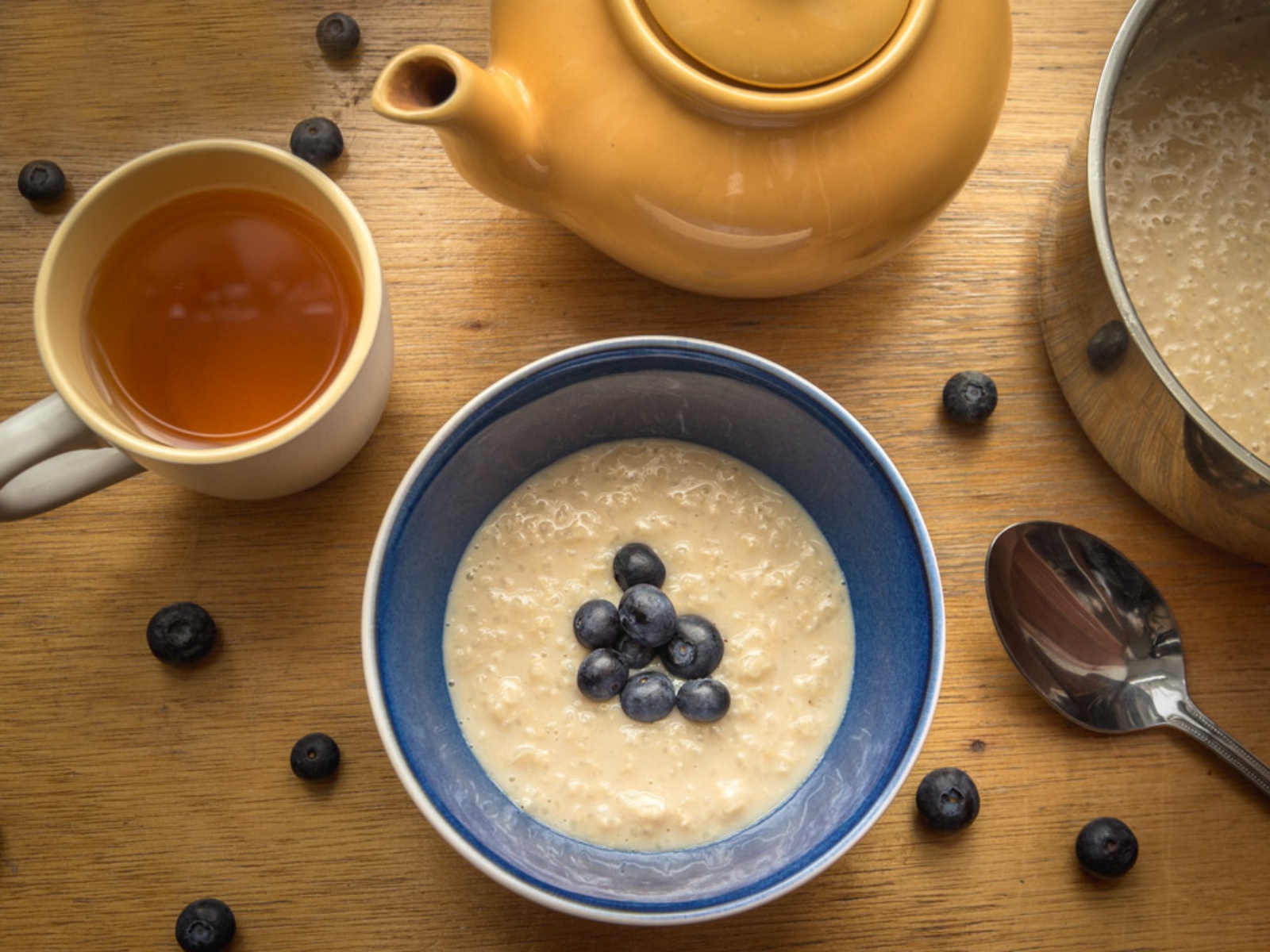 The trick to this Vanilla Rooiboos Rice Pudding by Melissa Tedesco is to stir it frequently. It’s like a risotto. You need to stir it so that the starch comes out of the rice, which gives the dish its creaminess. You don’t have to constantly stir it for 45 minutes, but every few minutes give it a whirl. Have it for dessert or even breakfast. You’ll love it! 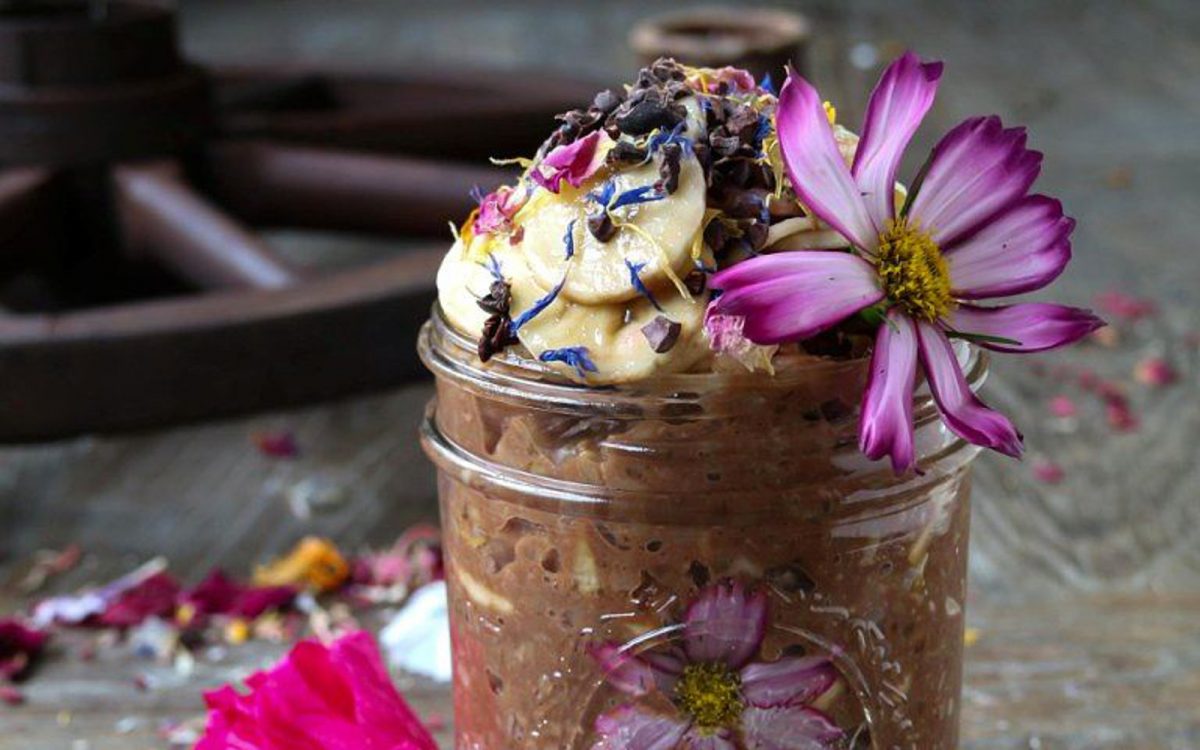 Rice pudding made with brown mochi rice is healthy and delicious. Add cacao, banana, raw cacao nibs, and raspberries and you are in breakfast heaven! Mochi rice is a short grain, glutinous rice. It has a very high starch content, which makes it sticky and perfect for rice pudding. The flavor of mochi in this Chocolate and Banana Mochi Rice Pudding by Katja Meier is mild and slightly sweet. 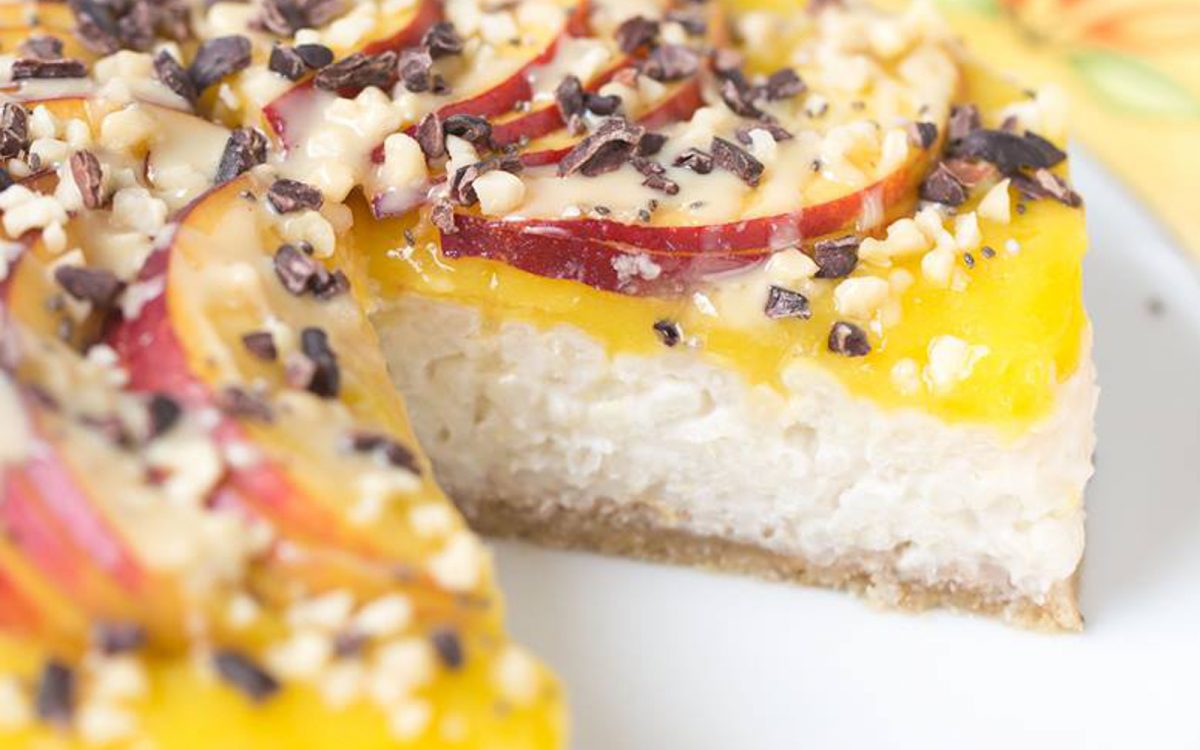 This No-Bake Rice Pudding Cake recipe by Deniz Kilic combines all the silky, rich goodness of pudding with the shape and style of a cake. The simple vanilla rice pudding rests on a hearty walnut crust and is finished with elegantly placed fruit, nuts, and mango purée. 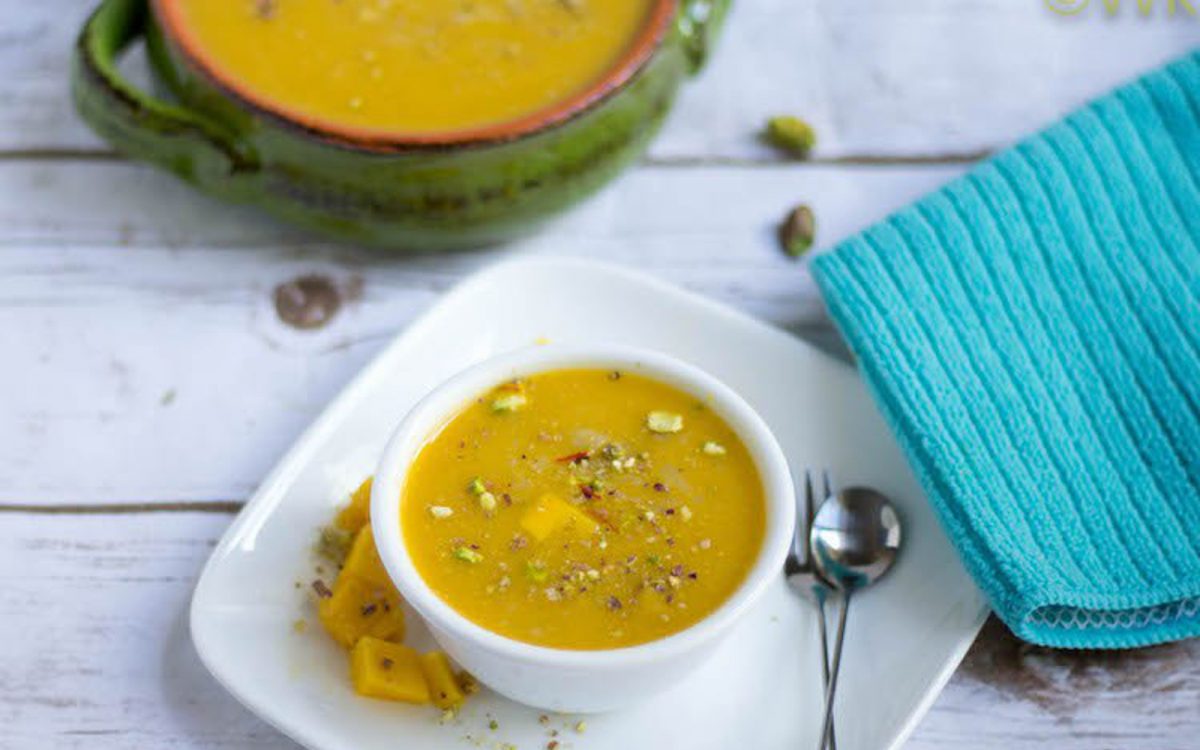 This Mango Phirni by Srividhya Manikandan with flattened rice is nothing but a simple yet delightful rice pudding. It’s a popular dessert recipe from the Indian subcontinent and is prepared with milk, rice, sugar, and the added flavors of saffron or cardamom or both. However, this vegan version is just as creamy and comforting as its predecessor and even more delicious. 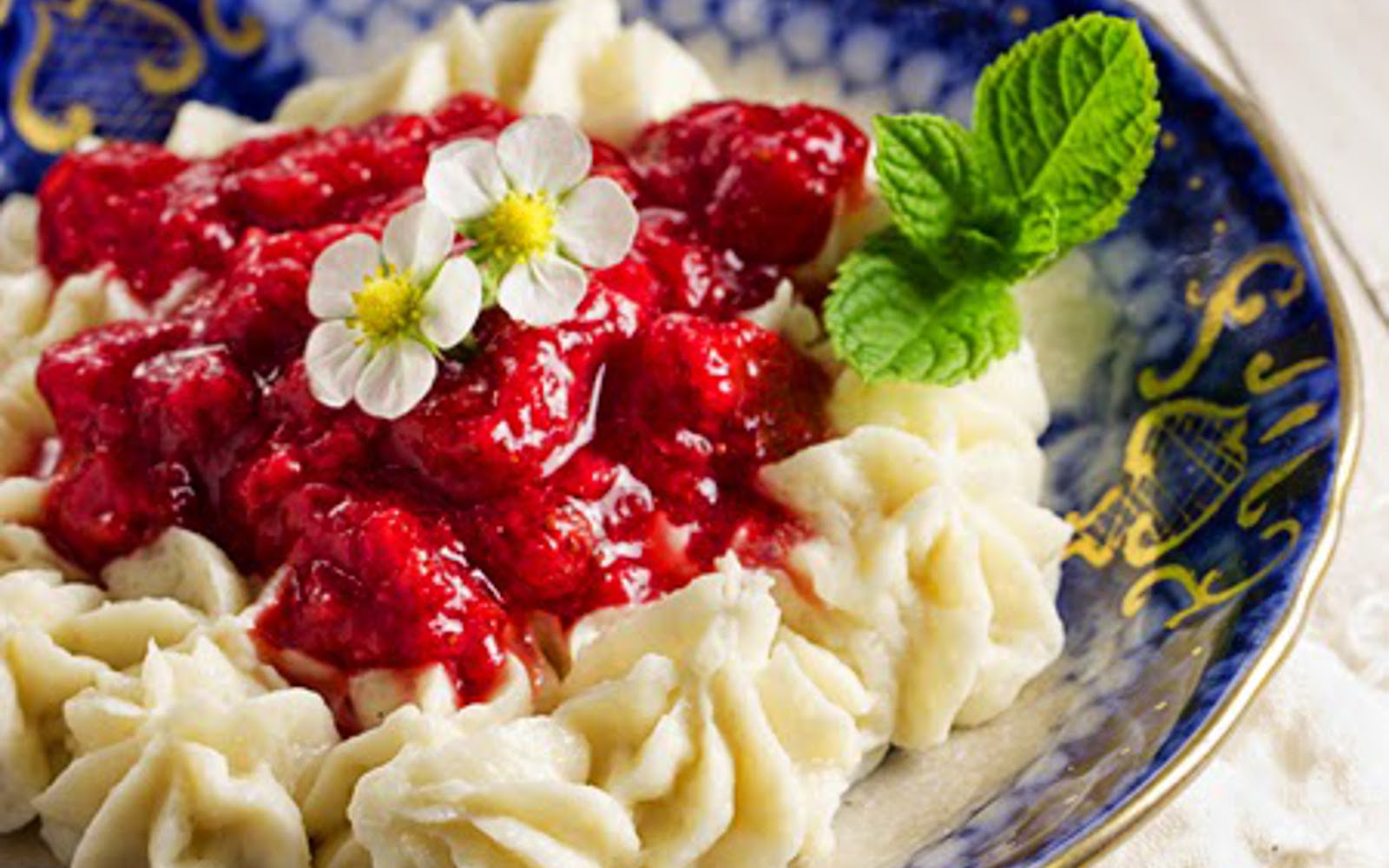 Love rice pudding? This decadent Pressure Cooker Rice Pudding With Stewed Strawberries by Simona Malerba is made by cooking risotto rice with non-dairy cream, brown sugar, and soy milk in a pressure cooker until sweet, sticky, and caramelized. While that cools, you whip up a quick strawberry compote, then blend the rice pudding into a lusciously creamy texture. Not only is this sweet rice pudding great for dessert, it would also make an amazing breakfast or brunch item! 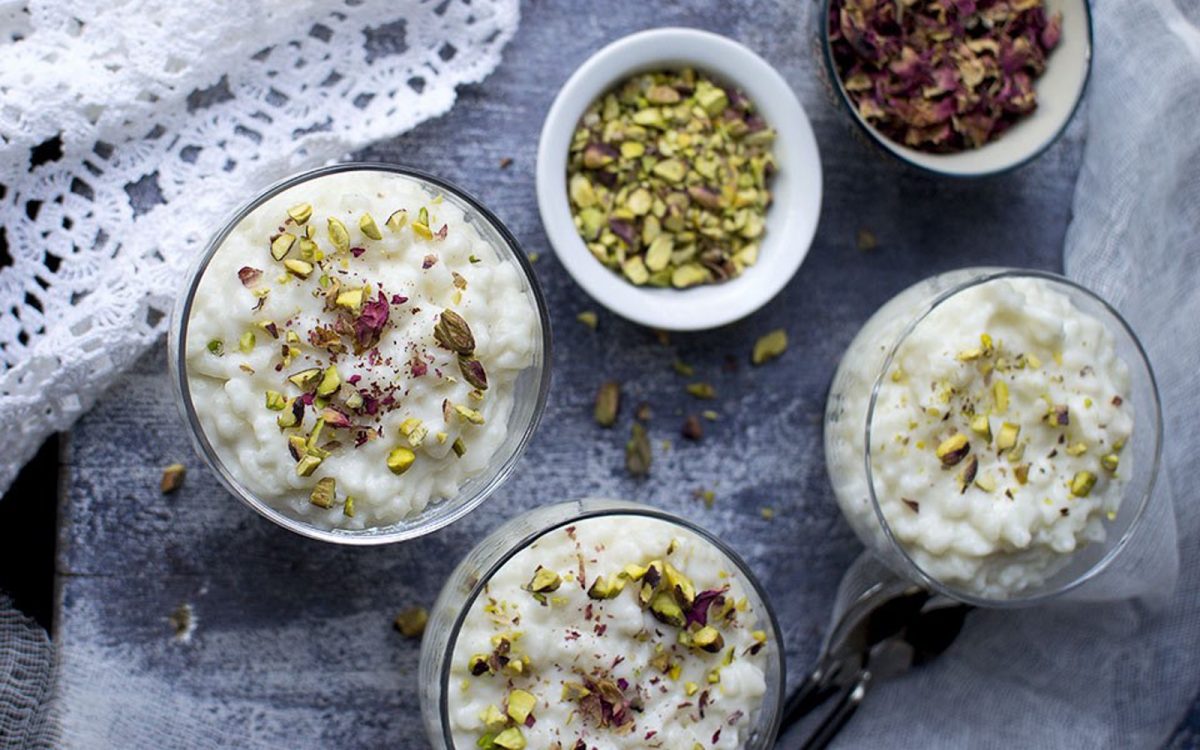 Syrian Rose Flavored Rice Pudding by Pavani Nandula is a creamy and delicious rice pudding flavored with rose essence. This rice pudding uses just a few simple ingredients but the end result is an absolutely delicious treat. It is a great make-ahead dessert and the leftovers are perfect for breakfast, too. 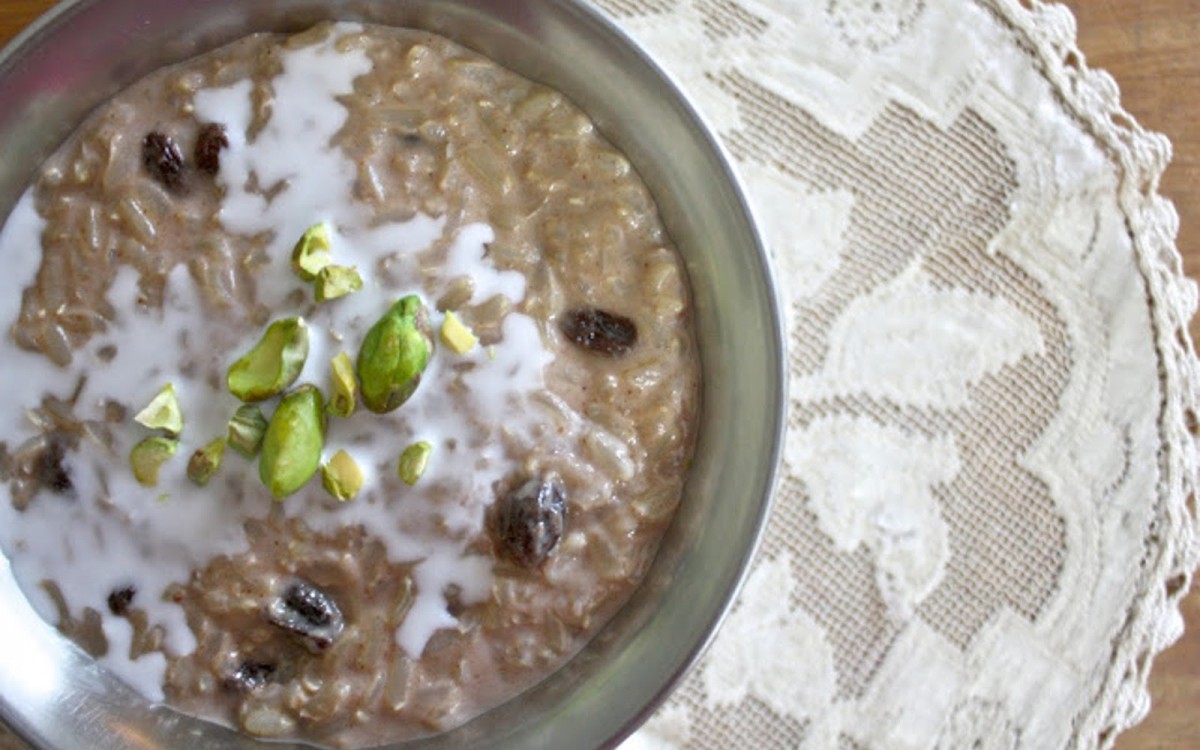 If you are a fan of rice pudding, and you haven’t yet experienced the Indian version, you must try this Kheer: Indian Rice Pudding recipe by Helyn Dunn! This healthier version uses brown rice, coconut milk, and date syrup. Top with lots of cinnamon and a bit of extra coconut milk for a creamy, dreamy dessert. 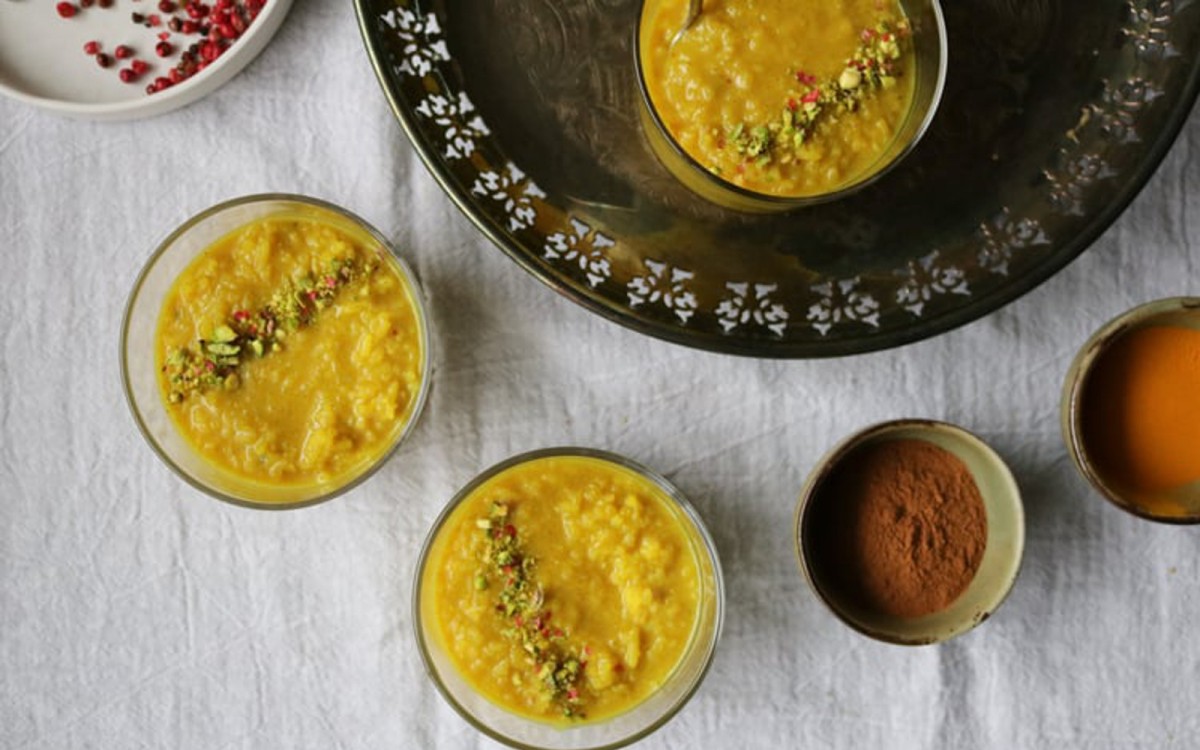 This Golden Rice Pudding by Christine DesRoches is a spin on the Ayurvedic turmeric-based beverage, golden milk. This lightly-sweetened pudding is a medley of flavor with turmeric, cinnamon, cardamom, star anise, peppercorn, and ginger. It’s a health-promoting treat that’s perfect for anytime. 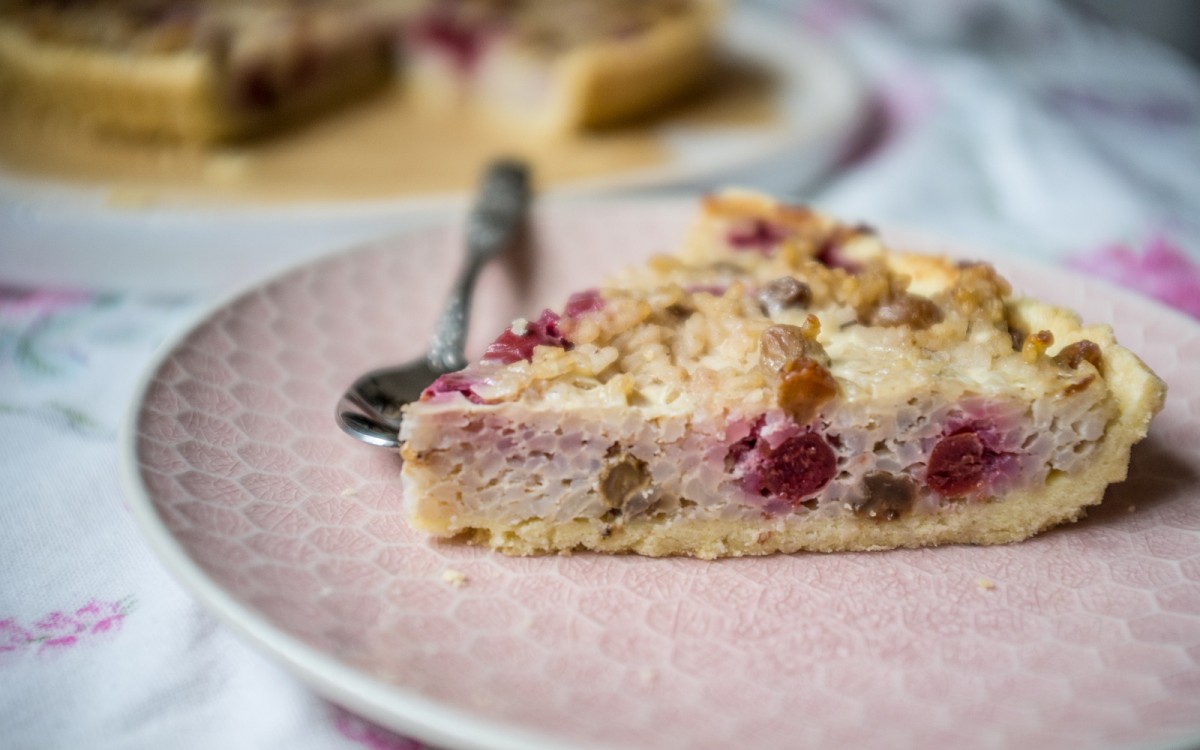 Rice pudding is a classic dish that tastes like home. This Rustic Cherry Rice Pudding Tart recipe by Sonja Trurnit reinvents it in tart form with sour cherries and homemade cashew cream. This dessert is elegant, yet it has a rustic charm to it that’s sure to win over everyone’s taste buds. 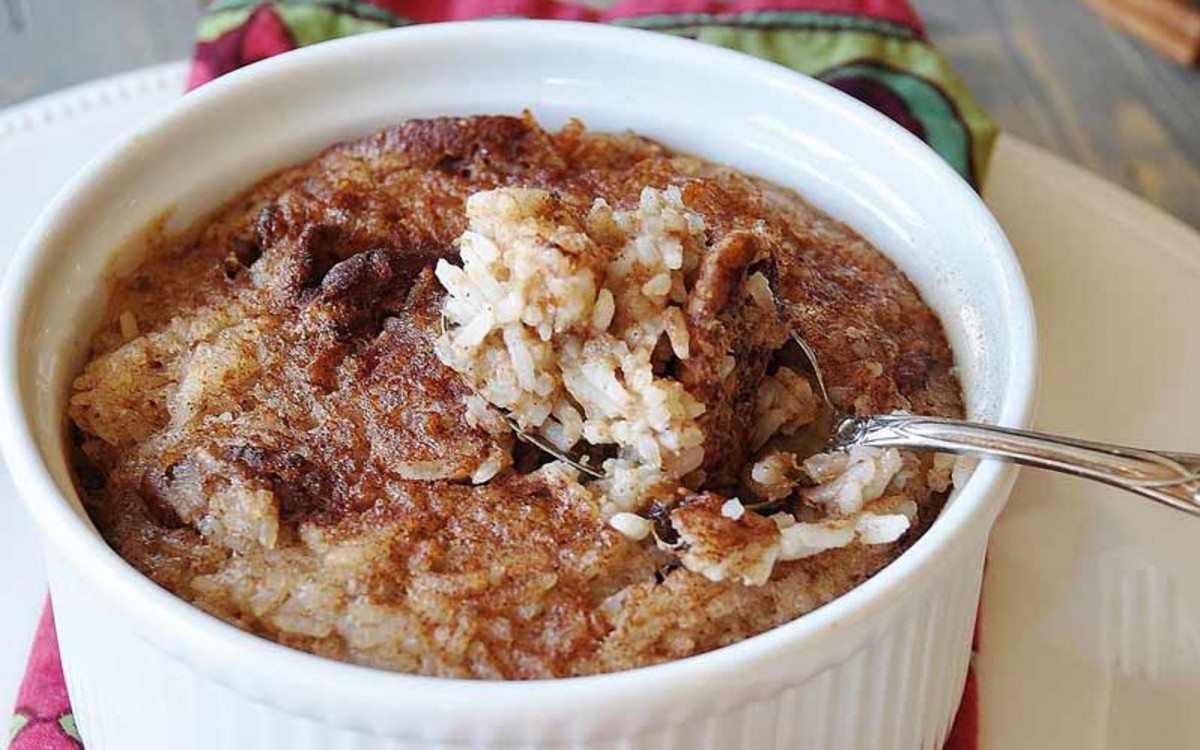 A sweet and creamy treat made with vegan nog, rice, and savory spices. This Egg-less Nog Rice Pudding by Alex and Linda Meyer is perfect for the holiday season, but good at anytime of the year. 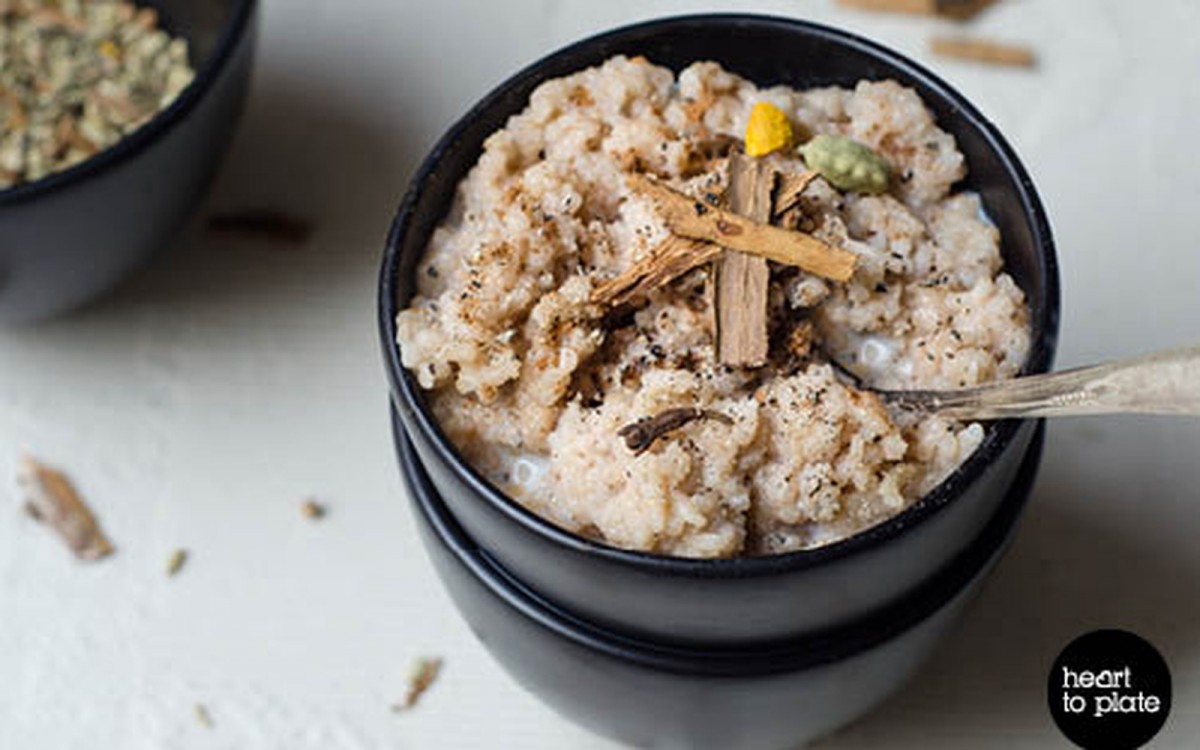 This Nepali Rice Pudding by Judy Moosmueller is a simplified and veganized version of a Nepali Ayurvedic rice pudding. It is traditionally eaten as a “first food” for mothers after birth because it aids digestion and helps rebuild energy. You can eat it as a wonderful cold-weather dessert or breakfast that will nourish you from the inside out! 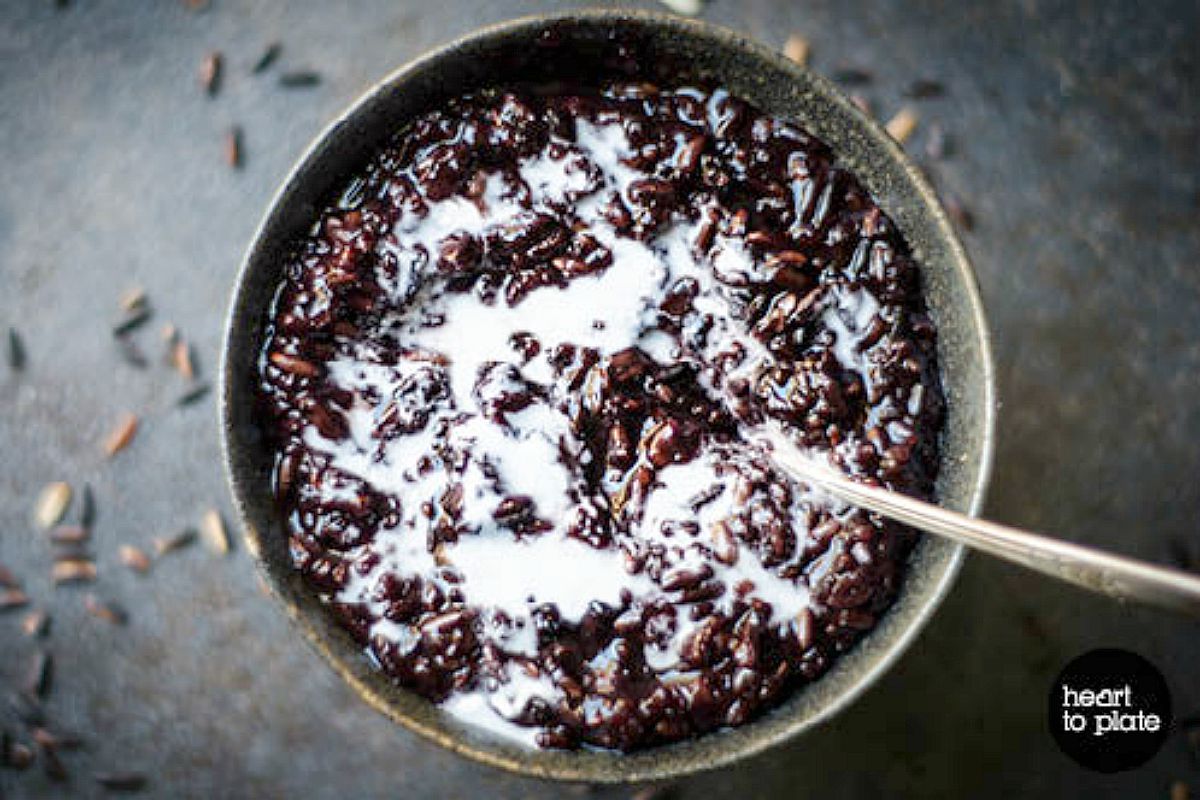 The traditional recipe has only four basic ingredients: black sticky rice, coconut milk, pandan leaves (optional) and coconut sugar. But the best news is that black rice is an absolute health bomb! Compared with other rices, it has the highest amounts of antioxidants (mostly anthocyanins), fiber, minerals and iron. Try this Black Sticky Rice Pudding (Bubur Pulut Hitam) by Judy Moosmueller. 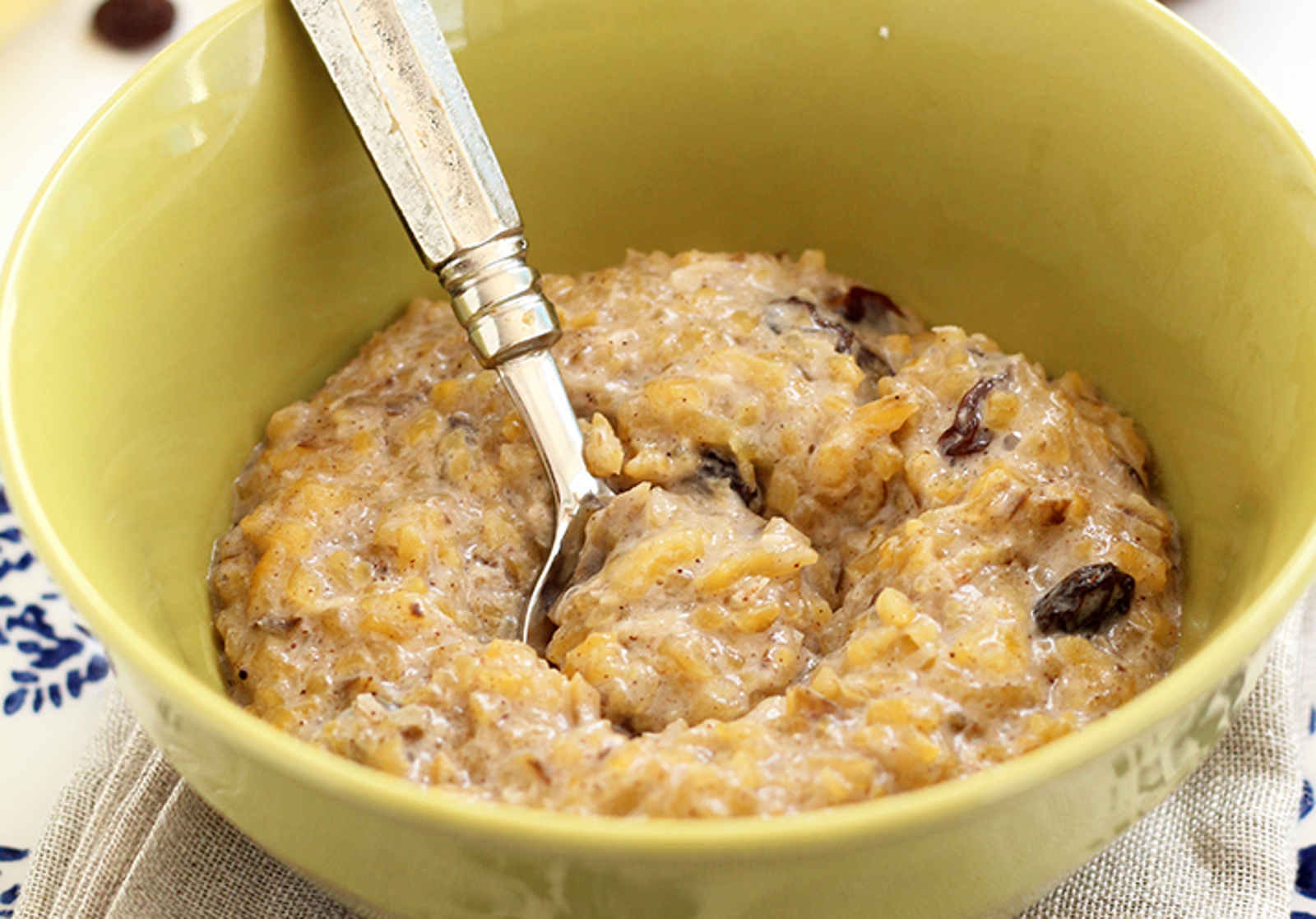 This Coconut Plantain ‘Rice’ Pudding by Alissandra Maffucci is gluten-free, vegan, Paleo, and like nothing you’ve ever tried before (unless you’ve had plantain rice pudding before, that is). First off, it only has just five ingredients and somehow, the flavors are so incredible, you’d think this would be some fancy schmancy dessert at a Michelin-rated restaurant. 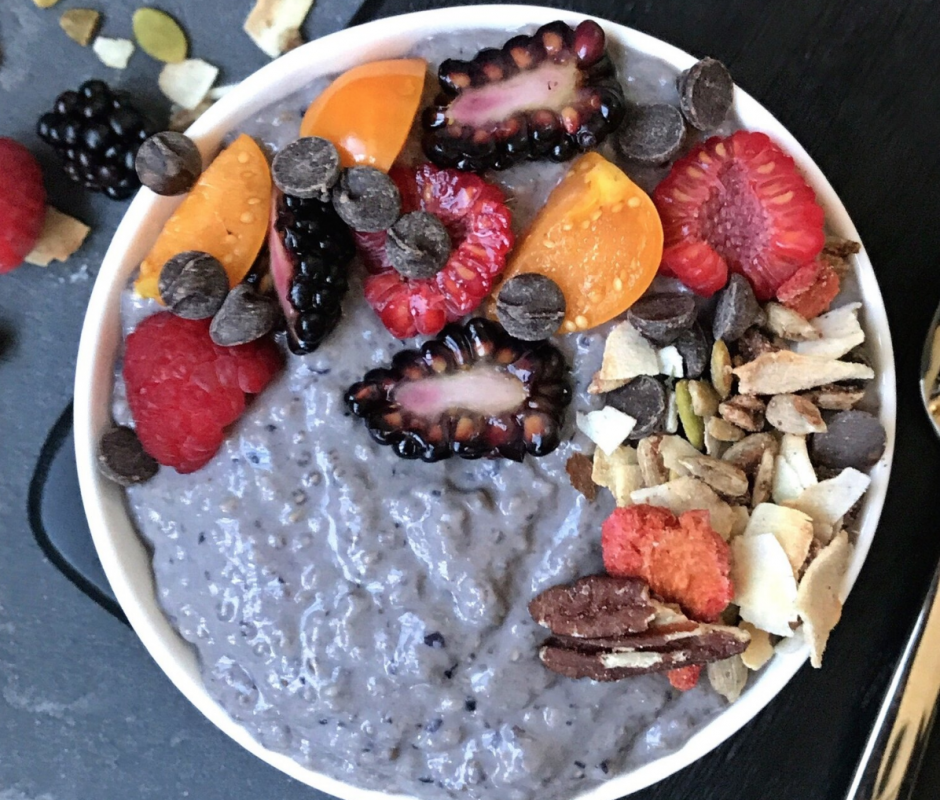