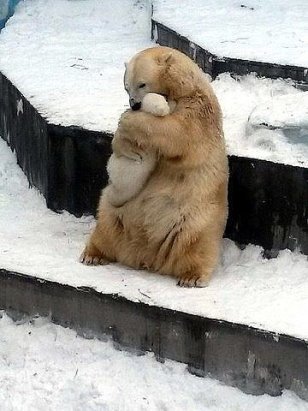 You’d be hard-pressed to find someone who is unfamiliar with the plight of polar bears. These animals are awe-inspiring and symbolic of the unconquerable frozen regions of the North Pole, however, in recent years, this status has diminished significantly. Driven by rampant greenhouse gases and climate change, the polar bear’s Arctic home has been receding rapidly. Because of this loss of ice, polar bears are unable to hunt or subsist in their environment, the U.S. Geological Survey projects that two-thirds of polar bears will disappear by 2050. Times have become so dire for this species that they’ve been observed resorting to eating dolphins, and traveling further into human territory – one haunting image even showed a polar bear rummaging through a landfill in search of food. The fact is, this species is in grave danger of extinction.

While their native home is melting away, polar bears are being placed in captivity and put on display in an effort to “raise awareness” for their plight. Although the wild polar bear is hanging on for survival, there seems to be at least one polar bear in zoos across the world. Some argue that keeping these animals in captive environments is the one way that we can ensure that they will endure for future generations – given that the wild is not a “safe” place for them anymore. It is also believed that getting people to see these animals up close and personal will inspire them to stand up for the species – in a way that they wouldn’t otherwise.

The reality, however, is that captivity, in no way benefits the polar bear – or any other – species. A growing body of evidence suggests that the act of watching an animal languish in a small enclosure does not, in fact, teach children or adults about the importance of conserving these species in the wild. Rather, zoos exist for entertainment and profit purposes that come at the great expense of the animals. Something this heartbreaking image illustrates with great clarity.

This baby will never know the wild home she was meant to live in. Nor will she understand what it truly means to be a polar bear.

This image has been construed as a sweet moment between a mother and her baby, but that betrays the profound reality of their sad situation. In captivity, these animals will only ever get to experience a small fraction of what their lives could have been. In the wild, they would have had miles and miles of ice to roam across and enjoy the thrill of hunting and interacting in family and social groups. Their lives would have had a very distinct meaning and purpose entirely of their own volition. Instead, they are confined to a glorified prison cell that is artificially cooled and packed with ice to keep them “comfortable.” The extreme boredom and frustration with this tiny ice box will likely lead them to exhibit stereotypic behaviors such as pacing or head bobbing. These pointless, repetitive actions are thought to be physical manifestations of extreme mental distress. According to Polar Bears International, “Some 85 percent of North American polar bears [in zoos] do it, devoting nearly a quarter of their “active day” (i.e. the time they spend alert and moving) to this behavior.”

If anything, this image is a harsh reminder that we owe these incredible animals so much more than a life in captivity. We owe them their wild home and a life free from the threat of starvation, boredom, or any other harm inflicted by humans.

The only way to really protect these animals is by saving their habitat – and this is something we can all do every single day by simply choosing to #EatForThePlanet. The United Nations Food and Agriculture Organization (FAO) estimates that livestock production is responsible for 14.5 percent of global greenhouse gas emissions, while other organizations like the Worldwatch Institute have estimated it could be as much as 51 percent. Additionally, this destructive industry currently occupies over half of the world’s arable land resources, and uses the majority of our freshwater stores. This system causes rampant air and water pollution, land degradation, deforestation and is pushing countless species to the brink of extinction. And yet, one in eight people still suffer from food scarcity.

“The real war against climate change is being fought on our plates, multiple times a day with every food choice we make,” said Nil Zacharias, co-founder and Editor-in-Chief of One Green Planet, ”one of the biggest challenges facing our planet, and our species is that we are knowingly eating ourselves into extinction, and doing very little about it.”

As the leading organization at the forefront of the conscious consumerism movement, it is One Green Planet’s view that our food choices have the power to heal our broken food system, give species a fighting chance for survival, and pave the way for a truly sustainable future. By choosing to eat more plant-based foods, you can drastically cut your carbon footprint, save precious water supplies and help ensure that vital crop resources are fed to people, rather than livestock. With the wealth of available plant-based options available and One Green Planet’s Food Monster App, it has never been easier to eat with the planet in mind.

Click here to see our archive of 5,000+ amazing vegan recipes.

2. #CrushPlastic:  Take action to cut plastic waste at the source and give marine life a fighting chance.