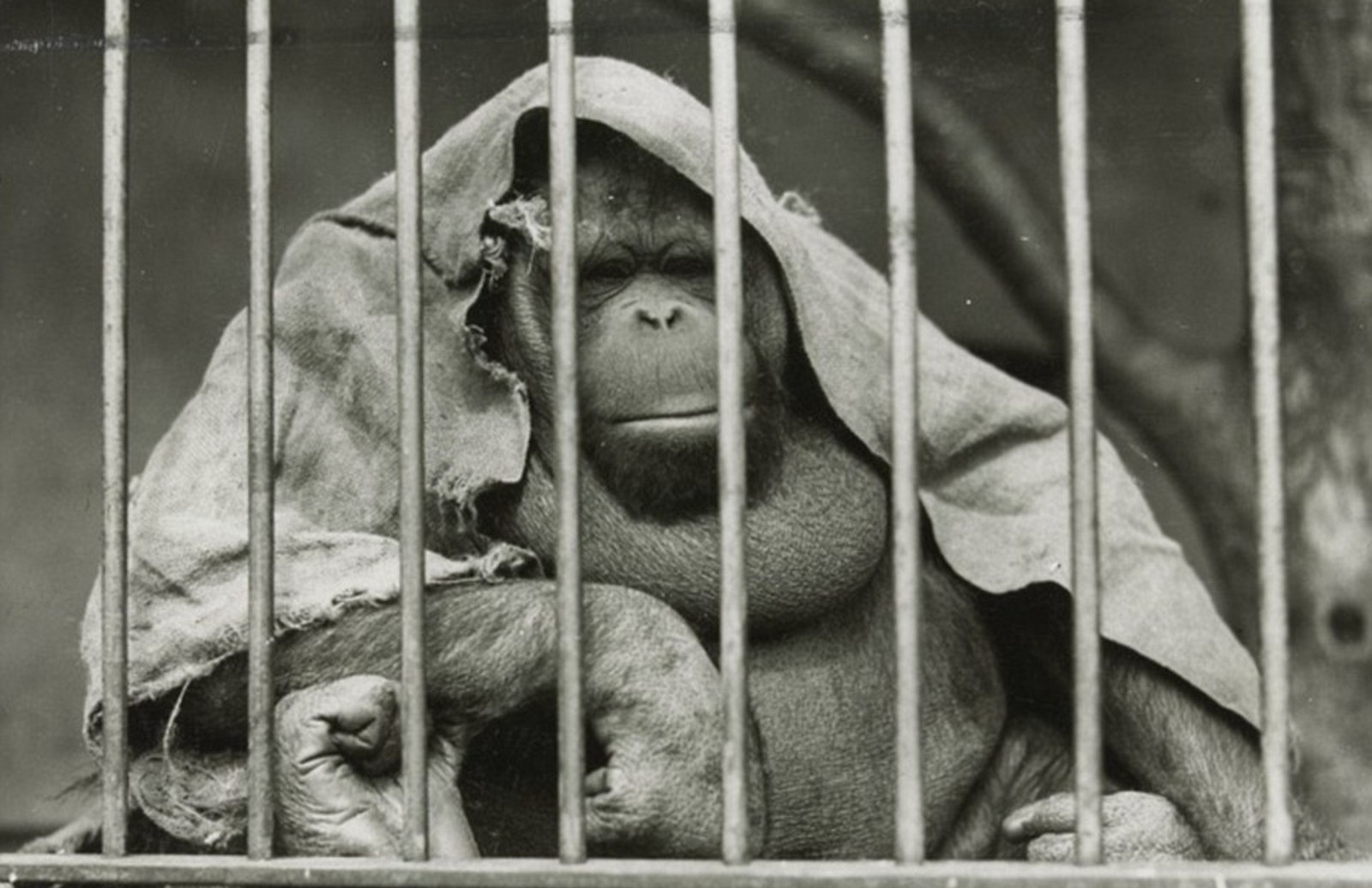 In recent years, members of the public have become increasingly aware of the problems faced by wild animals who are forced into captivity. The fervor over the acclaimed 2013 documentary “Blackfish” – which exposed SeaWorld’s questionable treatment of its captive whales – was one example of this heightened awareness. At the same time, the claims frequently put forward by zoos and other captive facilities to justify keeping animals such as elephants, tigers, lions, and others in captivity have come under closer scrutiny.

Zoos often claim to exist for conservation purposes, but the truth is that they rarely reintroduce any animals back into their native habitat. Animals who have lived all of their lives in a captive environment are usually unfit for release, as they have never developed the skills needed to survive on their own. Benjamin Beck, former associate director of biological programs at the National Zoo in Washington D.C., has said that in the last century, “only 16 of 145 reintroduction programs worldwide ever actually restored any animal populations to the wild. Of those most were carried out by government agencies, not zoos.”

Zoos have also claimed to serve a vital educational purpose … but with a growing body of evidence suggesting that the act of watching an animal languish in a small enclosure does not, in fact, do a whole lot to teach kids (or indeed, adults) about the importance of conserving them in the wild, this excuse is also standing on shaky ground.

The truth is that zoos were originally founded purely to provide humans with a source of entertainment. The welfare, health, and psychological well-being of the animals in these facilities was rarely considered to hold any importance. Old photographs released by the State Library of Victoria – showing what life in Australia’s earliest zoos was really like for the animals – make this abundantly clear. All of the photos were taken around 100 years ago.

The animals were frequently made to don sweaters… 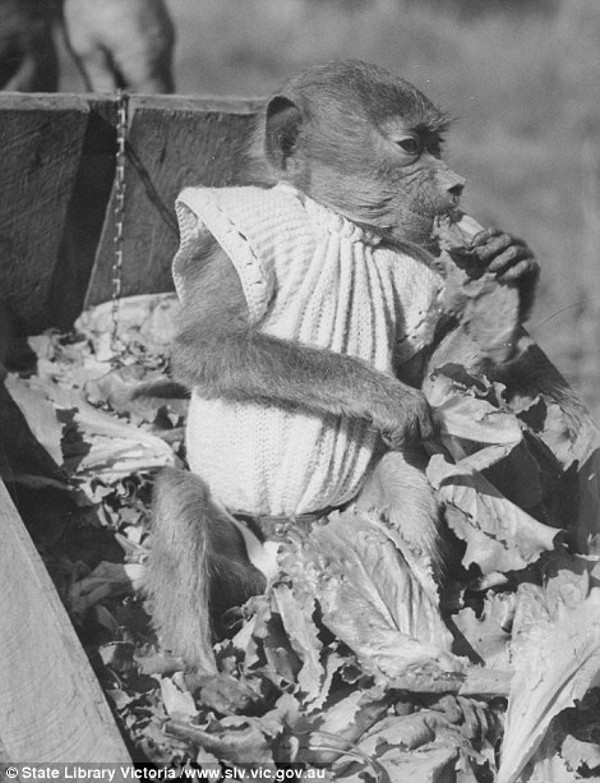 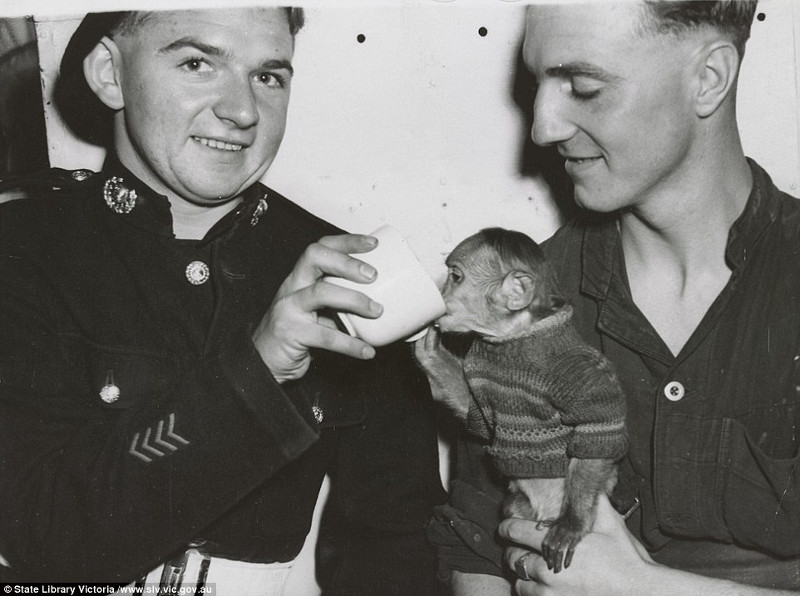 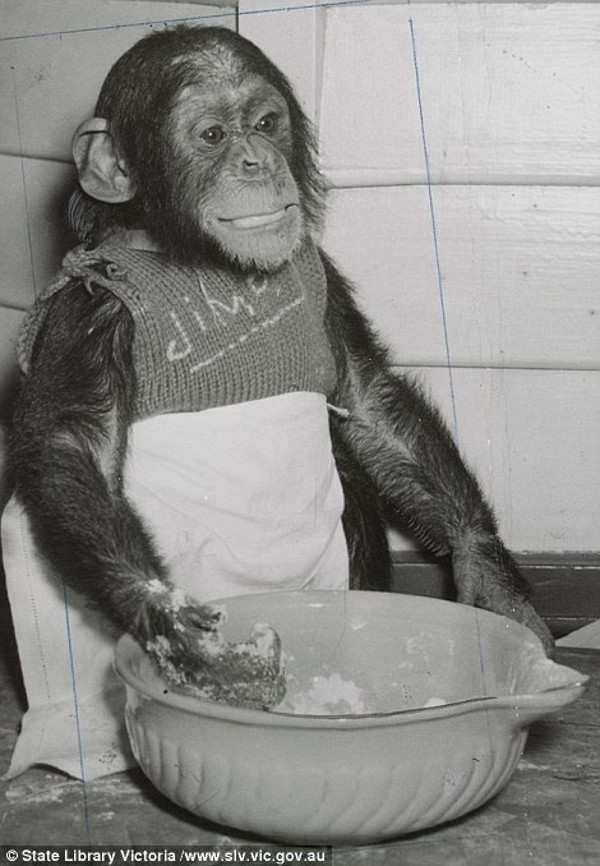 A tight chain can clearly be seen around this monkey’s neck. 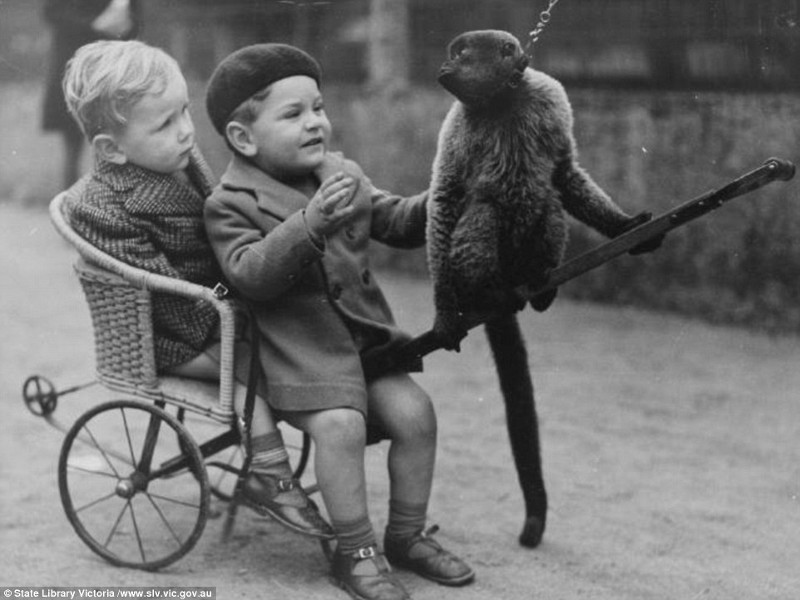 This picture reveals that several monkeys at a time were often crammed into a single cage. 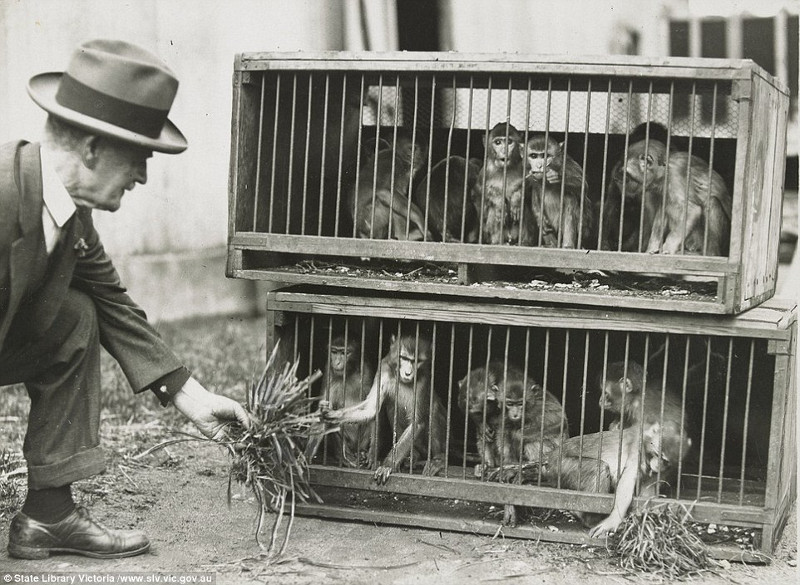 They were made to walk on stilts… 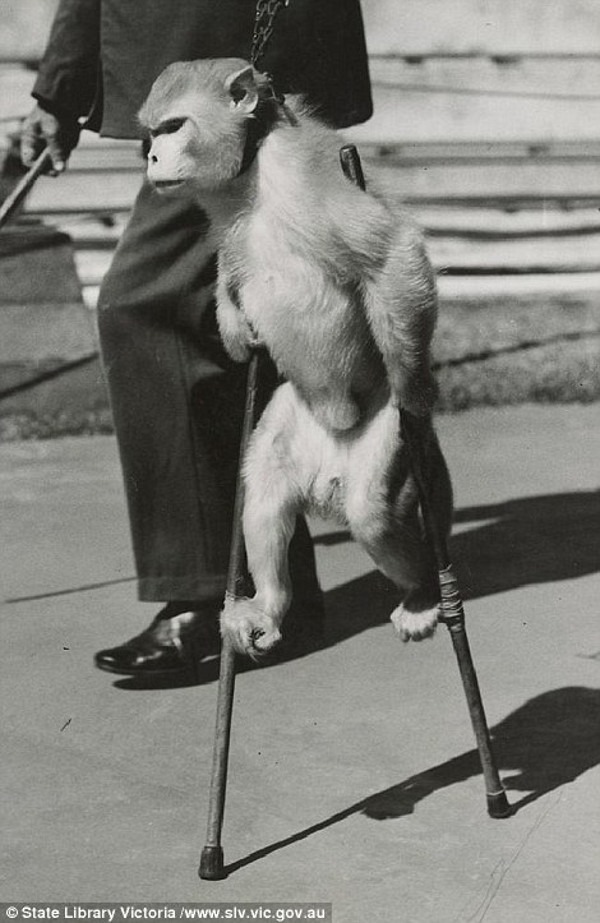 … and frequently had to wear collars with a leash attached, as zookeepers led them through the premises for the sake of amusing guests. 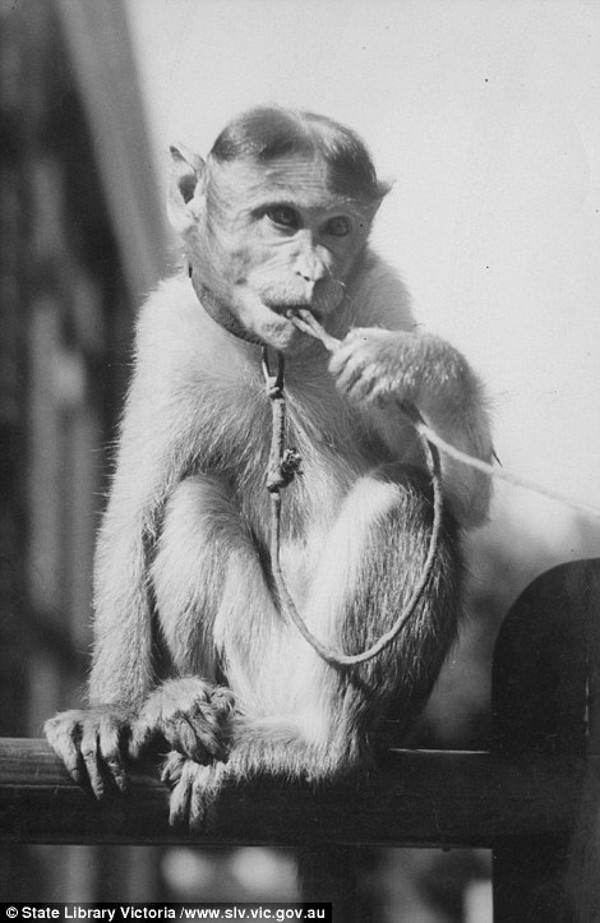 This chimp’s drooping head may have indicated how they felt about this. 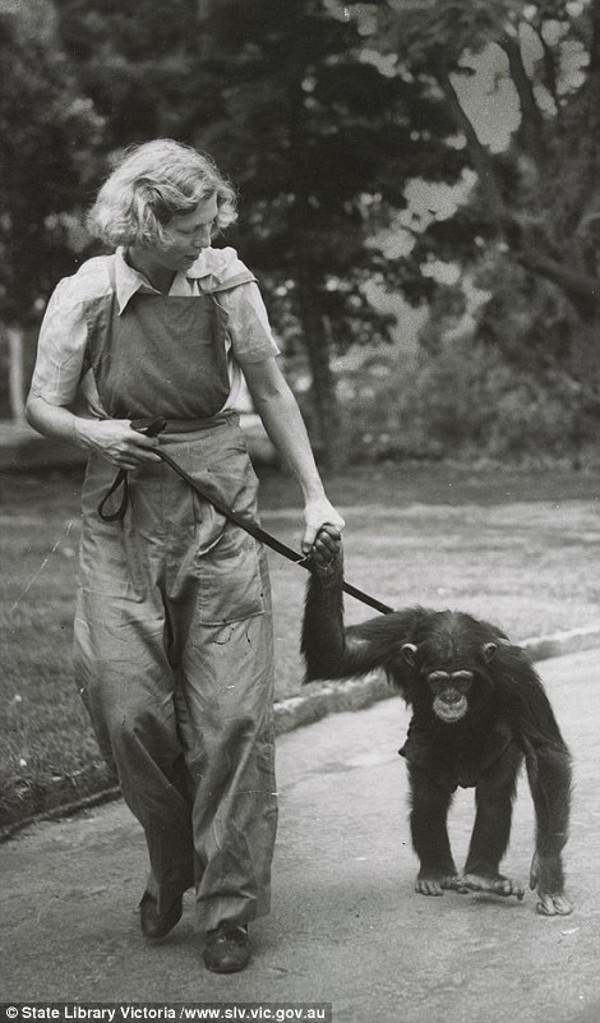 The sheer power and strength suggested by this hippopotamus’ roar reveals the folly of imagining that a tiny enclosure could ever have provided for this animal’s needs. 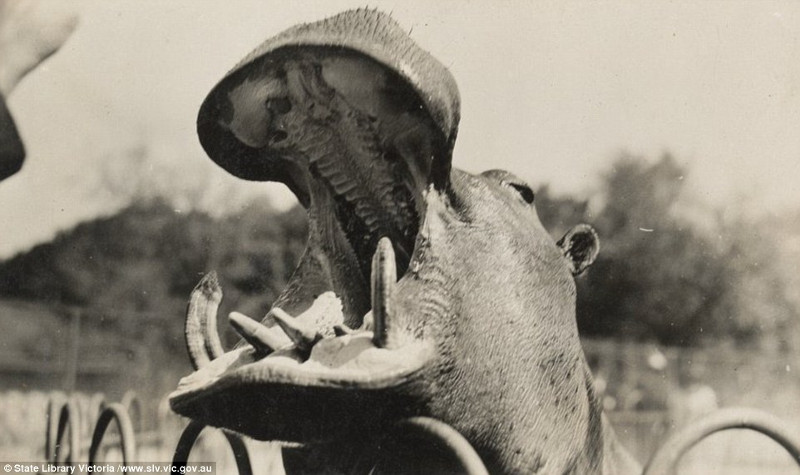 The jaguar in this photograph was confined to a tiny cage… 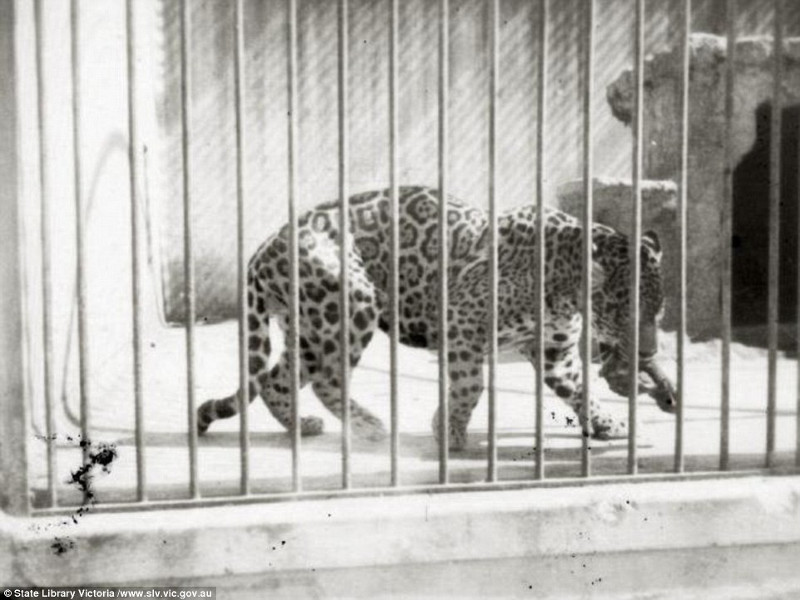 … as was this brown bear. 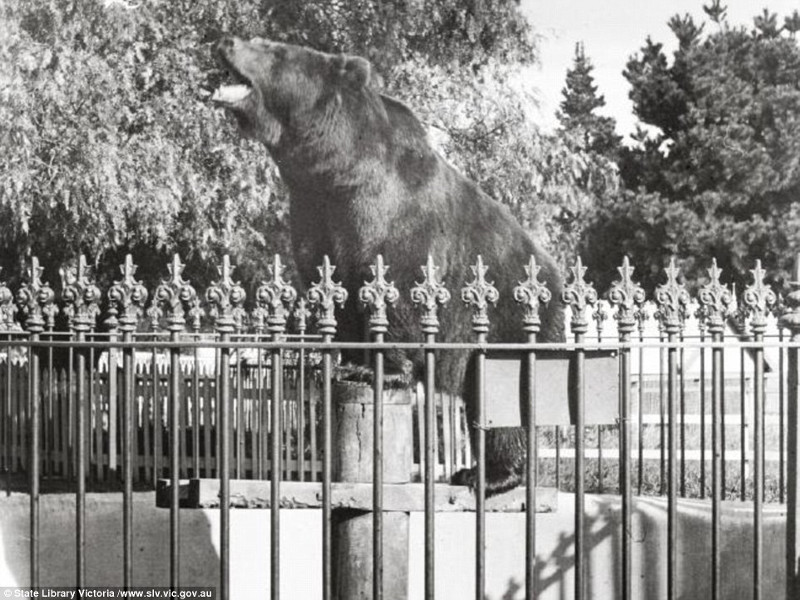 The poignancy of this image, as the chimp reaches out for help, is almost too heartbreaking to endure.

In zoos which have accredited by bodies such as the World Association of Zoos and Aquariums (WAZA), some of the more egregious practices shown in the photos have been phased out … but in unaccredited roadside zoos or tourist attractions, the situation is as dire as ever. For example, a tiger named Tony has been held in a dank, depressing cage at a truck stop in Gross Tete, Louisiana, ever since his birth in July 2000. The use of wild animals as photo props is still widespread, while cruel elephant trekking camps continue to proliferate in Southeast Asia.

While animals in “reputable”zoos may not be paraded around in chains anymore, there is no doubt that captivity takes a considerable toll on their mental and physiological well-being. Stereotypic behaviors such as head-bobbing, restless pacing, self-harm and bouts of aggression are commonly observed in captive animals, but never witnessed in their wild counterparts. Many zoos have had to resort to administering antidepressant medication to their animals in an attempt to ward off these issues. Whenever we place a group of wild animals into an artificial situation, purely for the sake of our own entertainment, there is no way of predicting the terrible consequences that may arise from this.

To learn more about the truth behind animal captivity – and why you should never visit a zoo or other facility that holds wild animals in small enclosures that can never truly meet their needs – read up on some of the posts below.