Help Save Santa This Christmas by Changing the Way You Eat 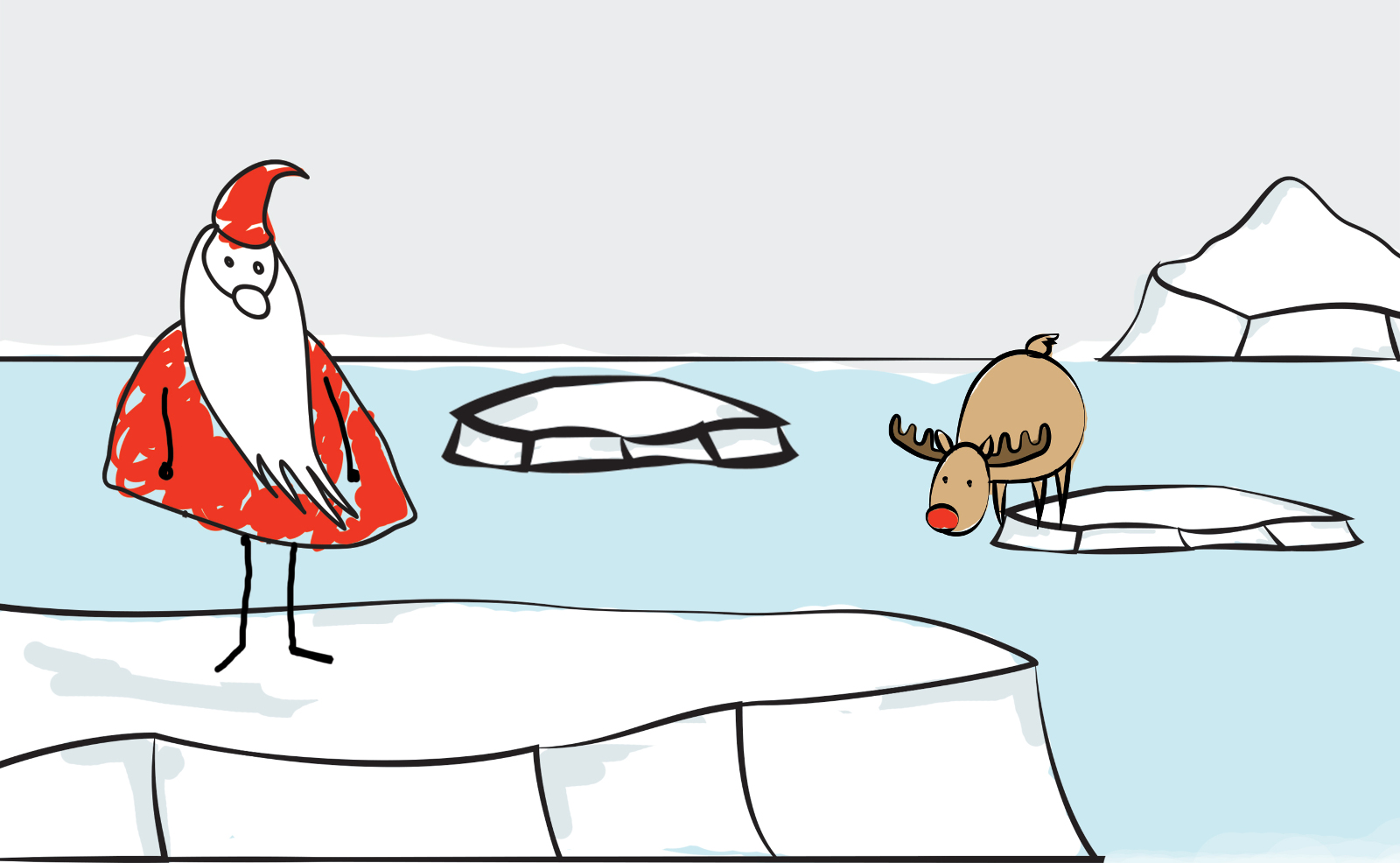 As children, many of us grew up hearing stories of Santa Claus, the mythical jolly man who resides in the North Pole and spends the year preparing toys for “good” girls and boys to be distributed on Christmas. We made wish lists for him and diligently tracked his progress around the world on Christmas Eve (they even have a GPS app to follow him now). The magic of Santa was the fact that he was able to traverse the entire globe in one night, a feat made entirely possible by the power of “Christmas Spirit” in the eyes of little ones. While this trek was awe-inspiring when we were young, as we’ve grown up and learned more about the world (and the conspicuous fiction of Santa – sorry if we spoiled that), what started to occupy our minds more than presents was the question of what these places Santa visits really look like. In our heads, the world is made up of pristine landscapes that are quickly becoming, frankly, as fictitious as Santa. Thanks to human activities, the planet as we know it has transformed from a lush forest wonderland with perfectly frozen poles and clear blue seas to a place subject to extreme weather, pollution, habitat destruction, and species extinction.

What does Santa’s trip from the North Pole look like in the age of climate change? And as Santa and plant-loving citizens, how can we help? Well, we dared to imagine a more realistic version of Santa’s trip around the world and being that we are One Green Planet, of course, we have an inspiring and effective message for how every single one of us can make a positive difference.

Before Santa left the North Pole, he knew he’d be in for a rough journey – he nearly lost a reindeer on a calving glacier! 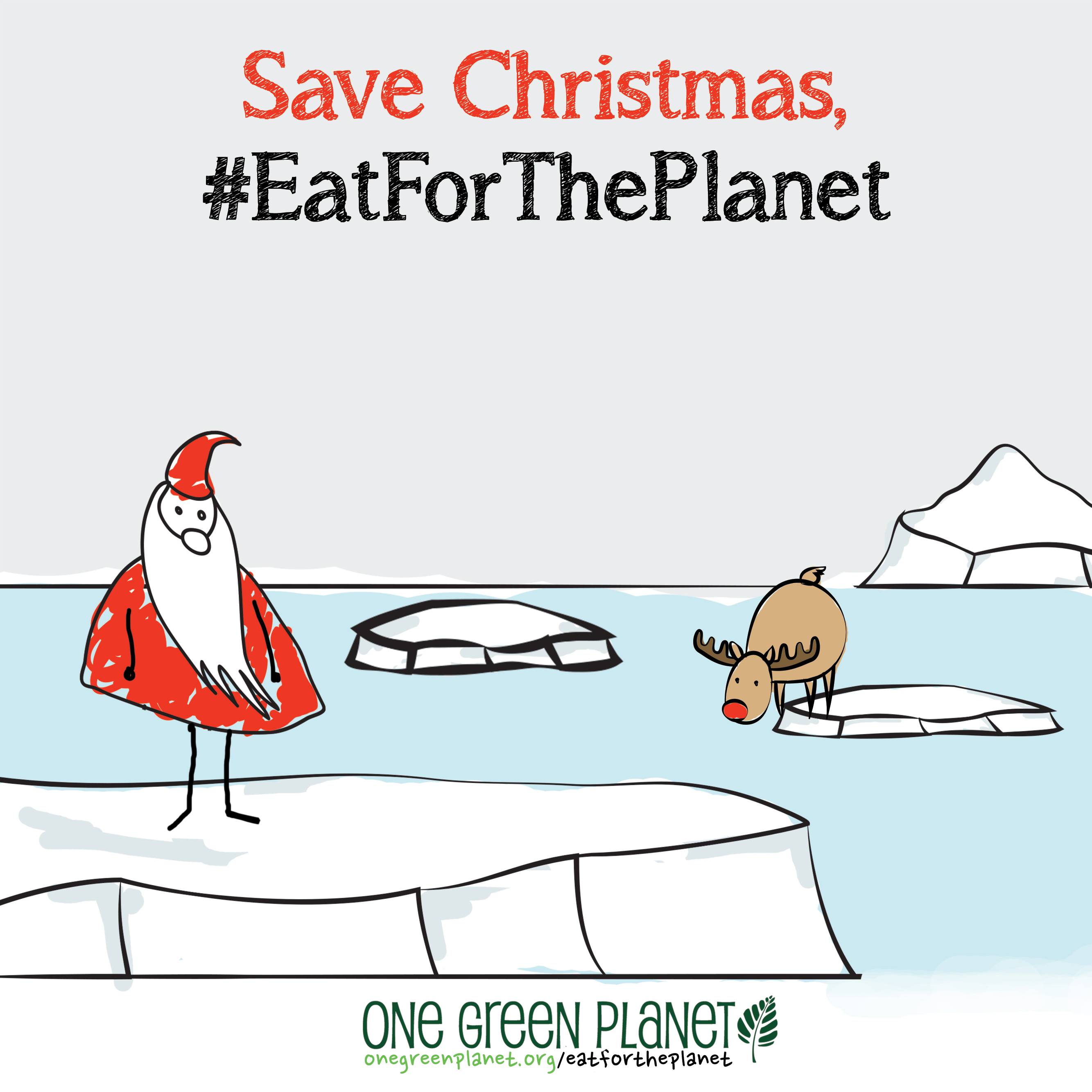 Met with unusual heat in Alaska, it was apparent that climate change was rearing its head. 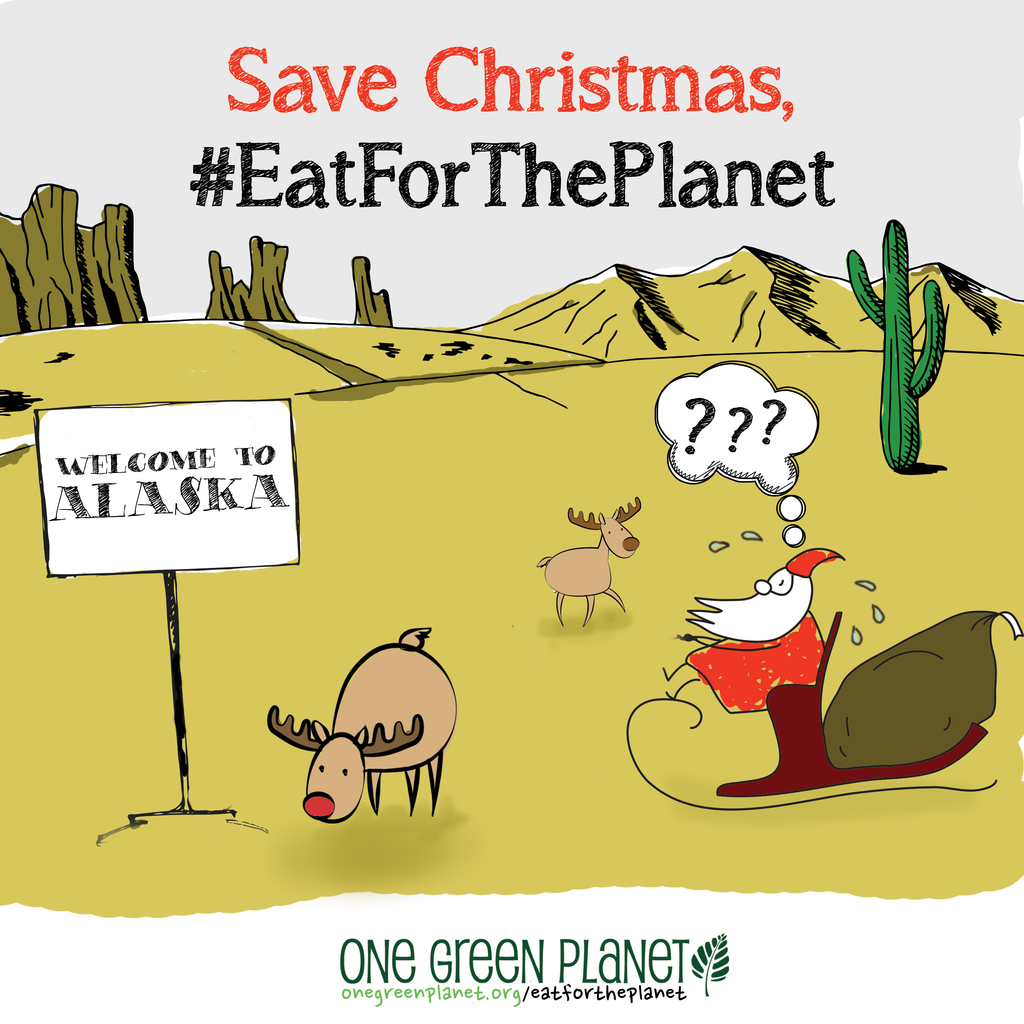 Hoping to catch a much-needed water break for the reindeer, Santa stopped in Lake Tahoe – only to find it had been too badly affected by California’s drought. 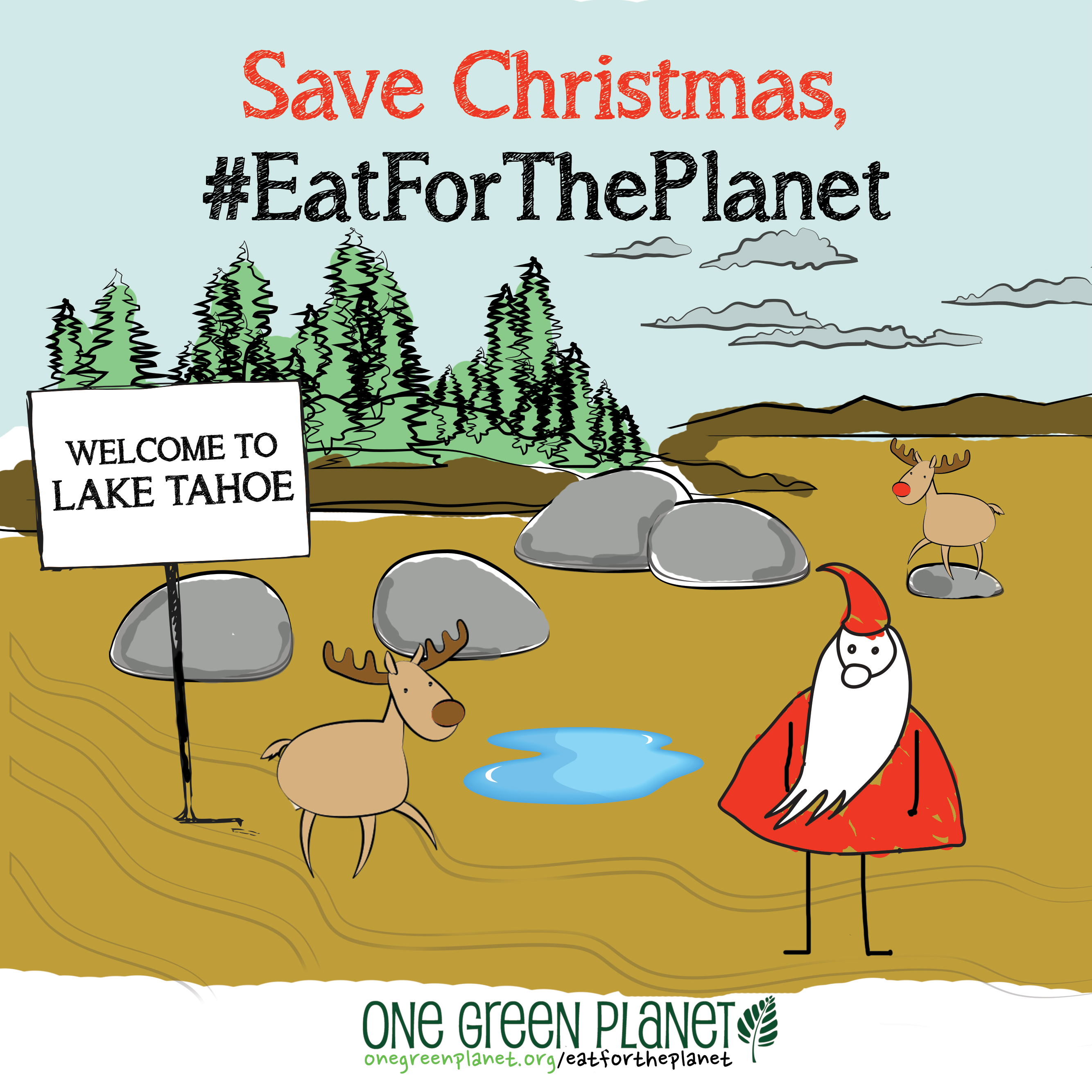 In the Amazon, Santa started to get an idea what was going on – looks like the forest was cut down for cattle ranches… 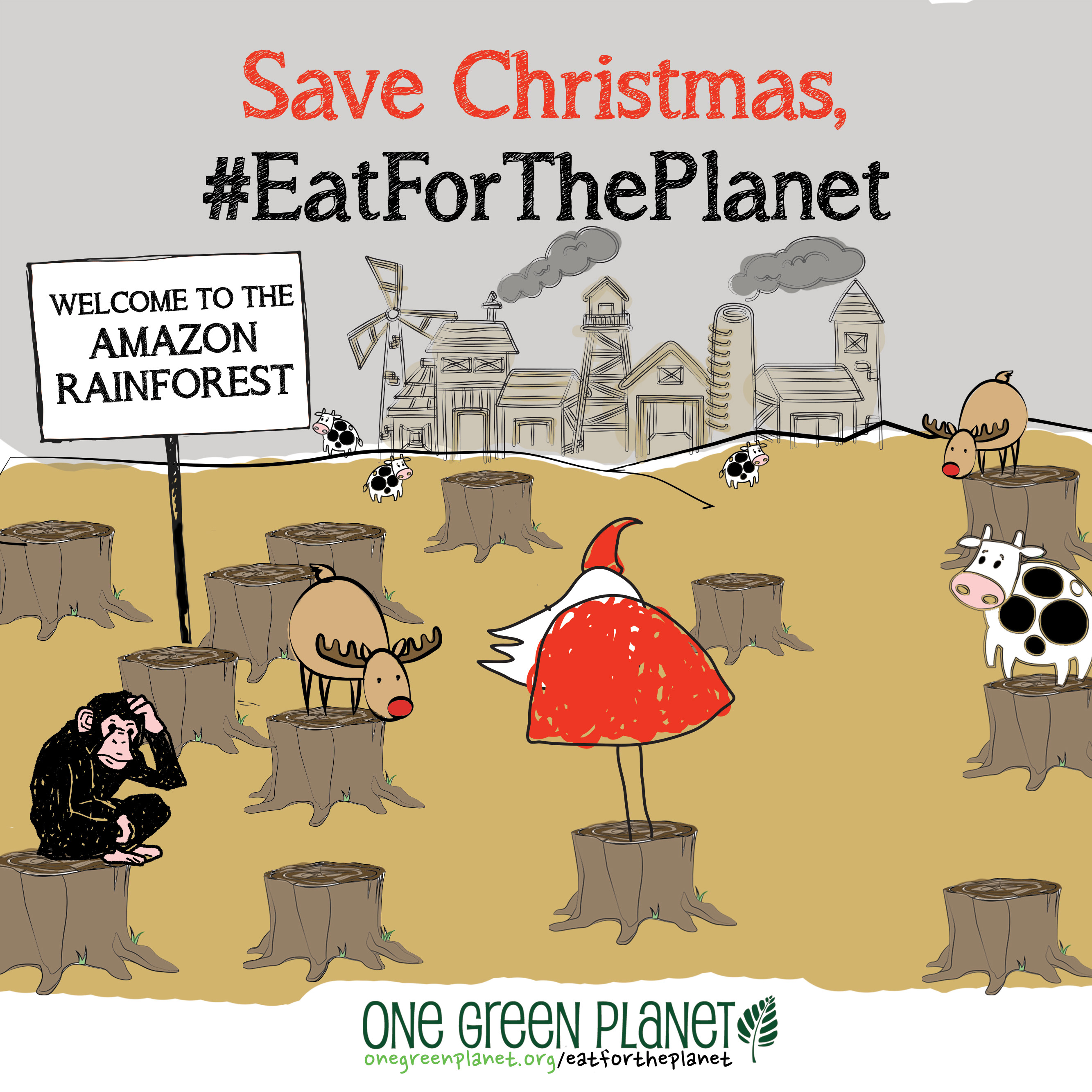 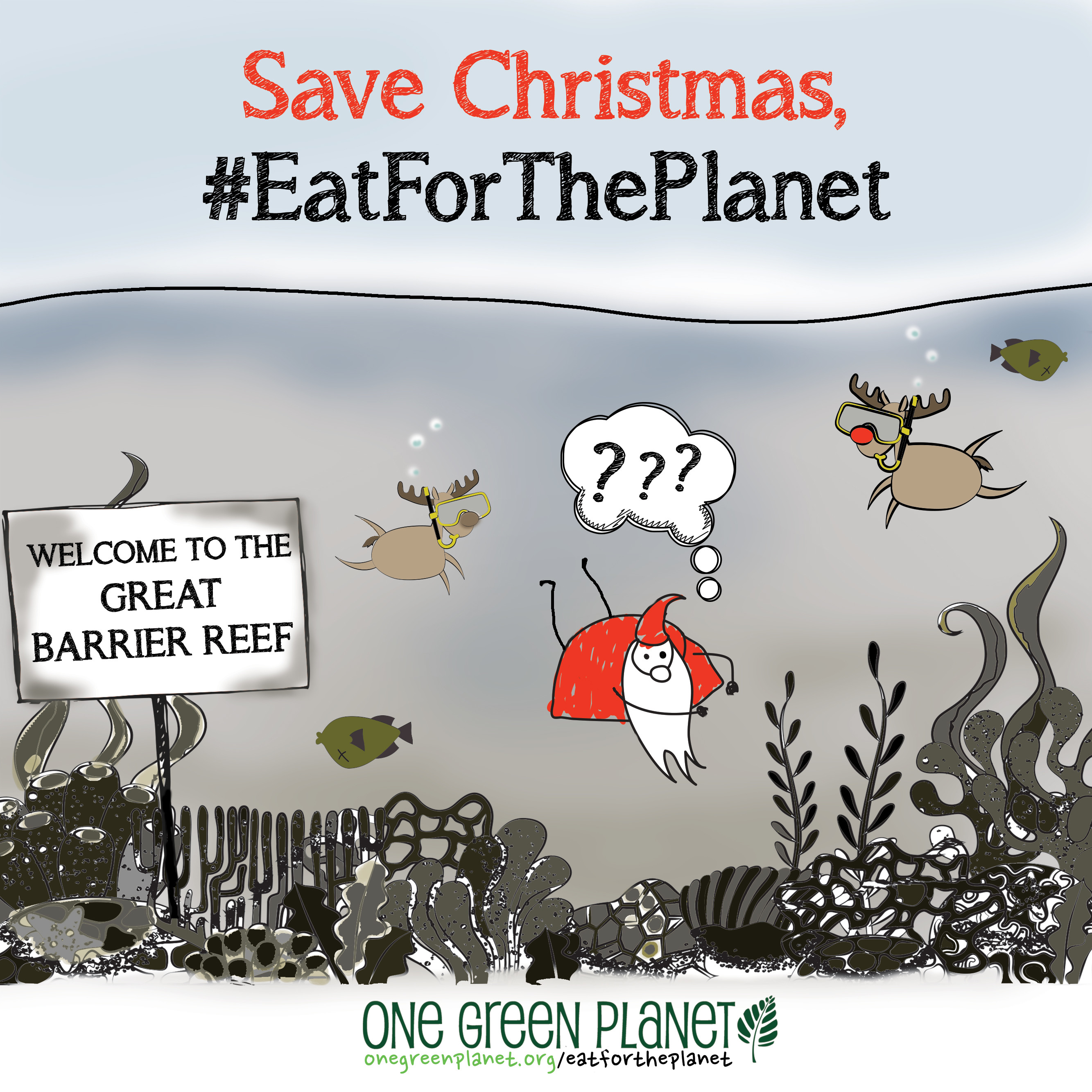 When he landed in Thailand, Santa and the reindeer were met with severe flooding in the wake of a hurricane, a form of extreme weather that is becoming more common thanks to climate change. 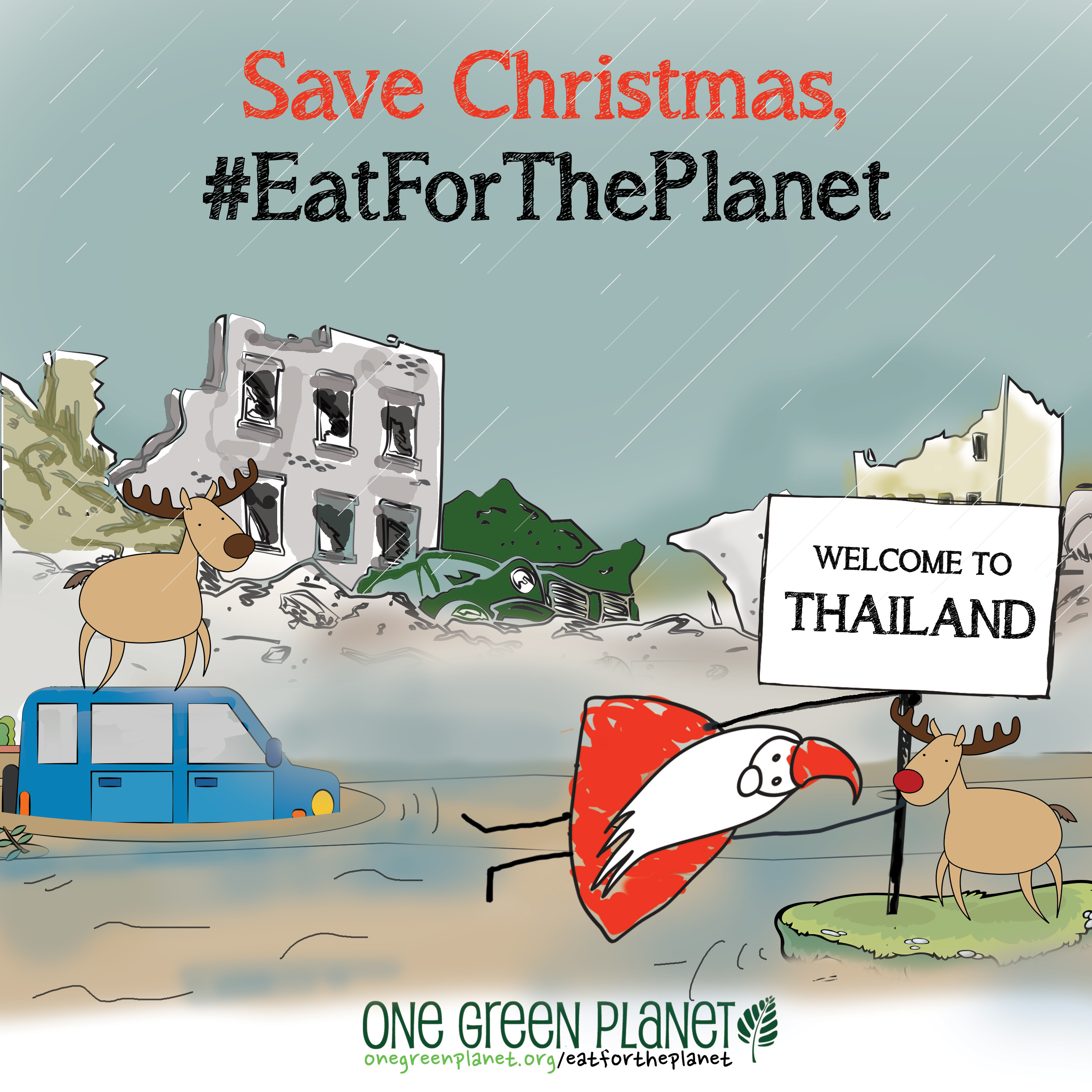 Next off to Beijing, Santa and his crew got up close and personal with thick air pollution – or at least they think so … they couldn’t really see. 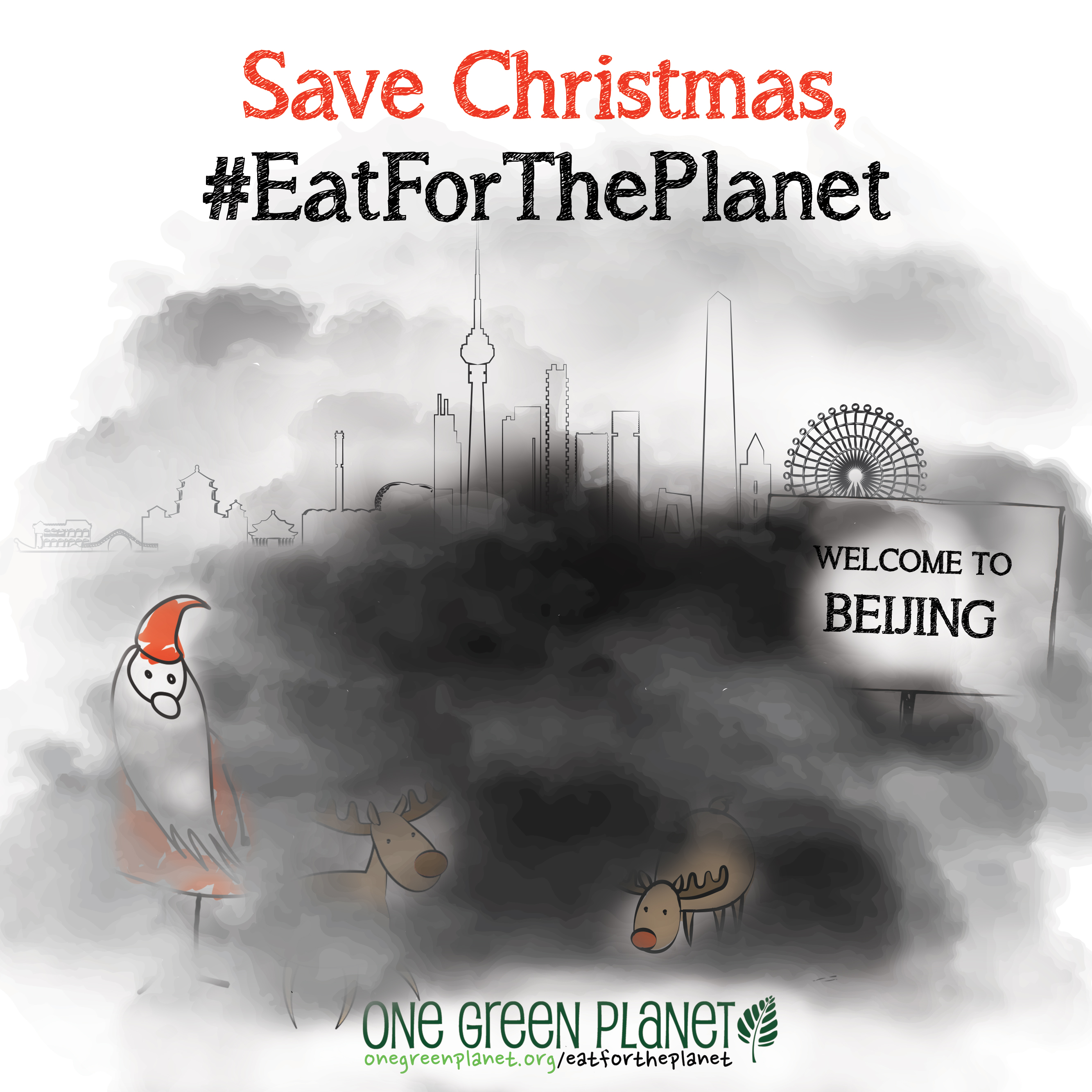 Santa got to take in the beauty of Venice from an underwater view, thanks to sea-level rise. 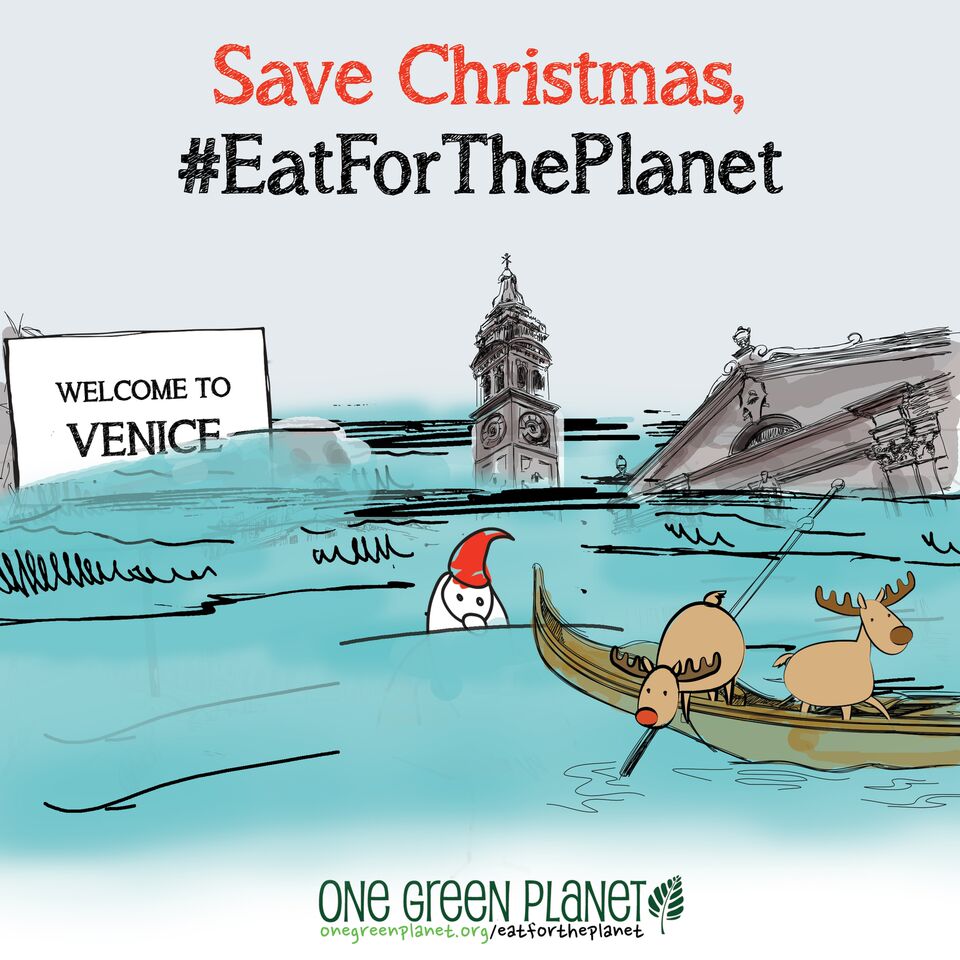 Seeing all the ads for cheeseburgers in Times Square, Santa finally started to connect the dots between all he’d seen and our consumption habits. 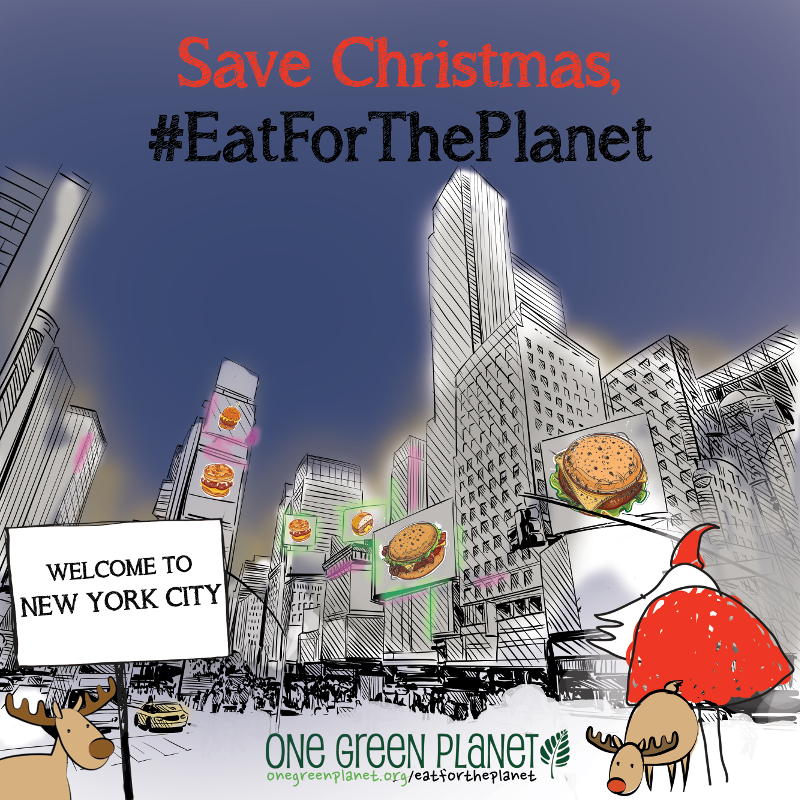 When he finally made it back home, Mrs. Claus had a surprise for him – a vegan feast. This smart lady has been reading up about the impact meat and dairy has on the planet, animals, and people and decided it was time to get some more plants into their diet. 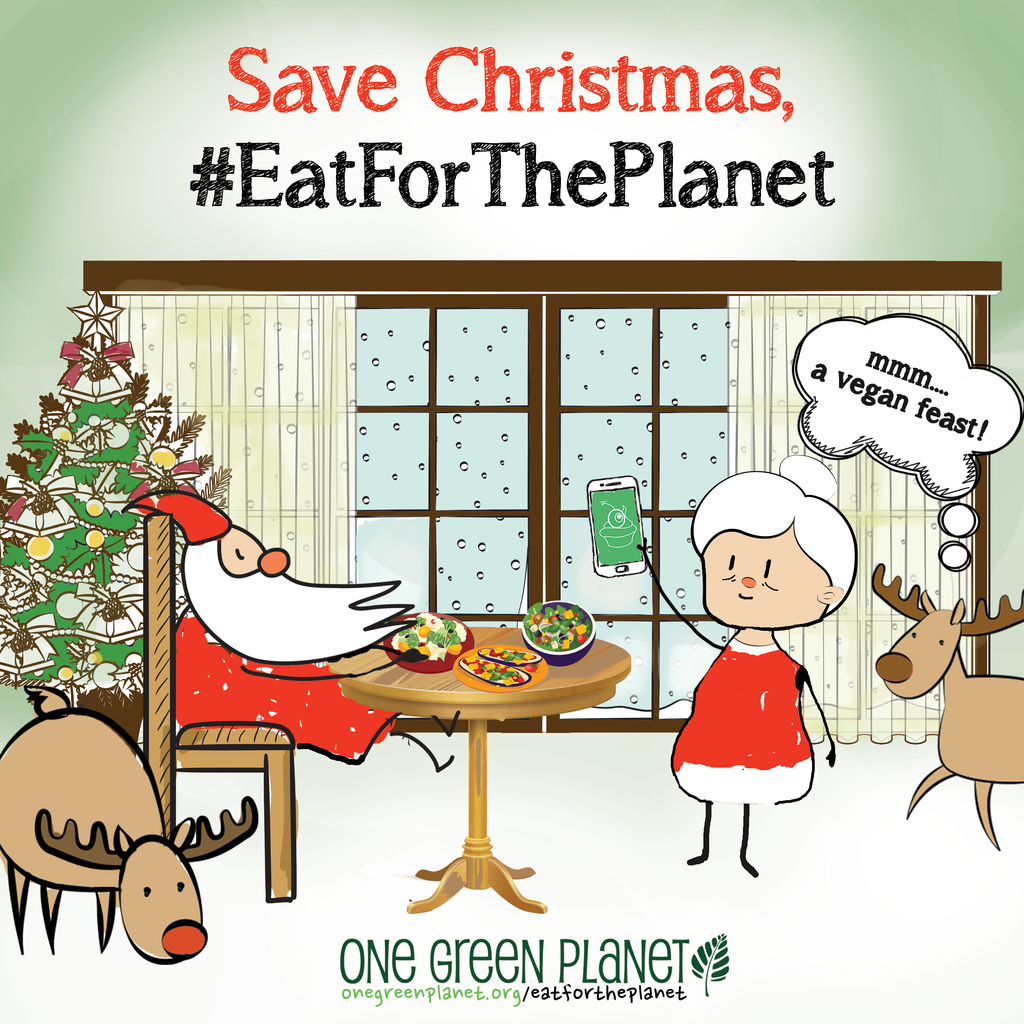 Santa has had quite the journey, but we can all ensure that the scenes he witnessed this year don’t get worse by making one simple choice. One Green Planet believes that our global food system dominated by industrial animal agriculture is at the heart of our environmental crisis.