You probably don’t think about your trash once it’s thrown away. It gets placed in a bag, eventually goes into a dumpster and then it’s picked up and hauled off to a landfill. Out of sight, out of mind, right? Well, it’s time we start to seriously think about the impact our trash has on the environment.

About 85 percent of the plastic produced in our world isn’t recycled, and around 8.8 million tons of plastic makes its way into our oceans every year, where it pollutes our waters and kills marine life. On land, our trash poses a threat to wildlife who can accidentally ingest plastic pieces or become entangled while searching for food.

An opossum was recently brought into the Wild West Wildlife Rehabilitation Center in Amarillo, Texas by an animal control officer, who found the animal with the plastic rings from a six-pack embedded in its neck and leg. The injury, which likely happened while the animal was searching for food, caused an infection so severe it became infested with maggots. If a kind human hadn’t stepped in to help, this innocent creature would have succumbed to a terrible, agonizing death — all because of a piece of trash thrown away by a human. The opossum is expected to make a full recovery and will be released back into the wild, but not all animals are so lucky. 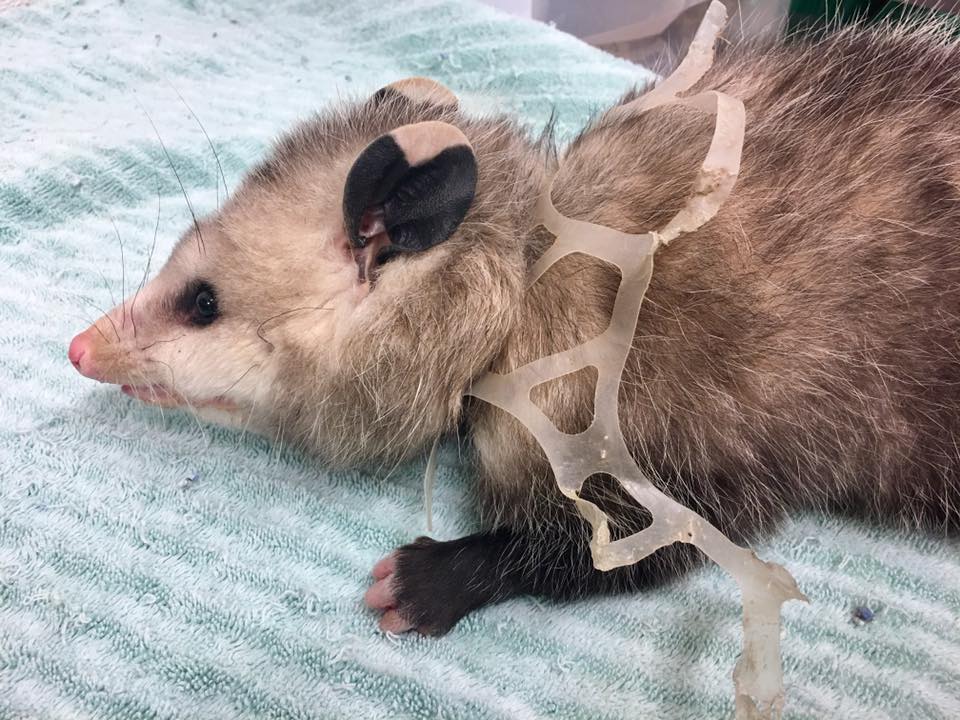 Convenience is Killing Animals and Our Planet

Our on-the-go lifestyle has resulted in a world where convenience has taken priority over the well-being of our planet and its inhabitants. So much of what we purchase is either made of plastic or encased in some form of plastic — it’s even present in certain soaps and scrubs in the form of microbeads, which pollute our water supplies. 300 million tons of plastic materials are produced every year, with single-use products being a major contributor to the problem.

Single-use items like plastic water bottles, cups, bags, straws, utensils, razors, and coffee pods are all tossed into the trash without giving much thought to where they might end up. And items like plastic six-pack rings, plastic bags, and netting from the fishing industry can cause serious harm when animals become entangled. Imagine the fear an animal experiences as they try desperately to escape, only making themselves more entangled and causing further injury. Or the pain they feel after ingesting a piece of plastic that tears up their digestive tract. After causing damage on land, millions of tons of trash eventually ends up in the ocean, where it becomes a hazard to marine life.

Almost 90 percent of the trash floating through our oceans is plastic, and since this material doesn’t biodegrade, it either stays fully intact or breaks down into small pieces that float throughout the water. Decades of carelessness on our part have resulted in having a literal patch of trash swirling through the ocean, known as the Great Pacific Garbage Patch.

The approximately 270,000 tons of plastic floating on the surface of the ocean poses a danger to marine animals who can become entangled in the trash or ingest small pieces which they mistake for food. There are currently 700 marine species in danger of extinction, all because of the effects of plastic. Not to mention, a recent study estimates we will have more plastic than fish in our ocean by 2050.

It’s hard to comprehend such staggering statistics, which is why it’s so important for us to act before it’s too late. Recycling is one great way to combat the issue, but we also need to work on reusing what we already have, and eliminating our dependence on plastic convenience products.

Help Save Animals — and Our Planet

Here at One Green Planet, we want to help you slowly quit your plastic habit. Here are a few simple steps to help you get started:

Join One Green Planet’s #CrushPlastic initiative and start making a difference for the planet. Click on the graphic for more information.