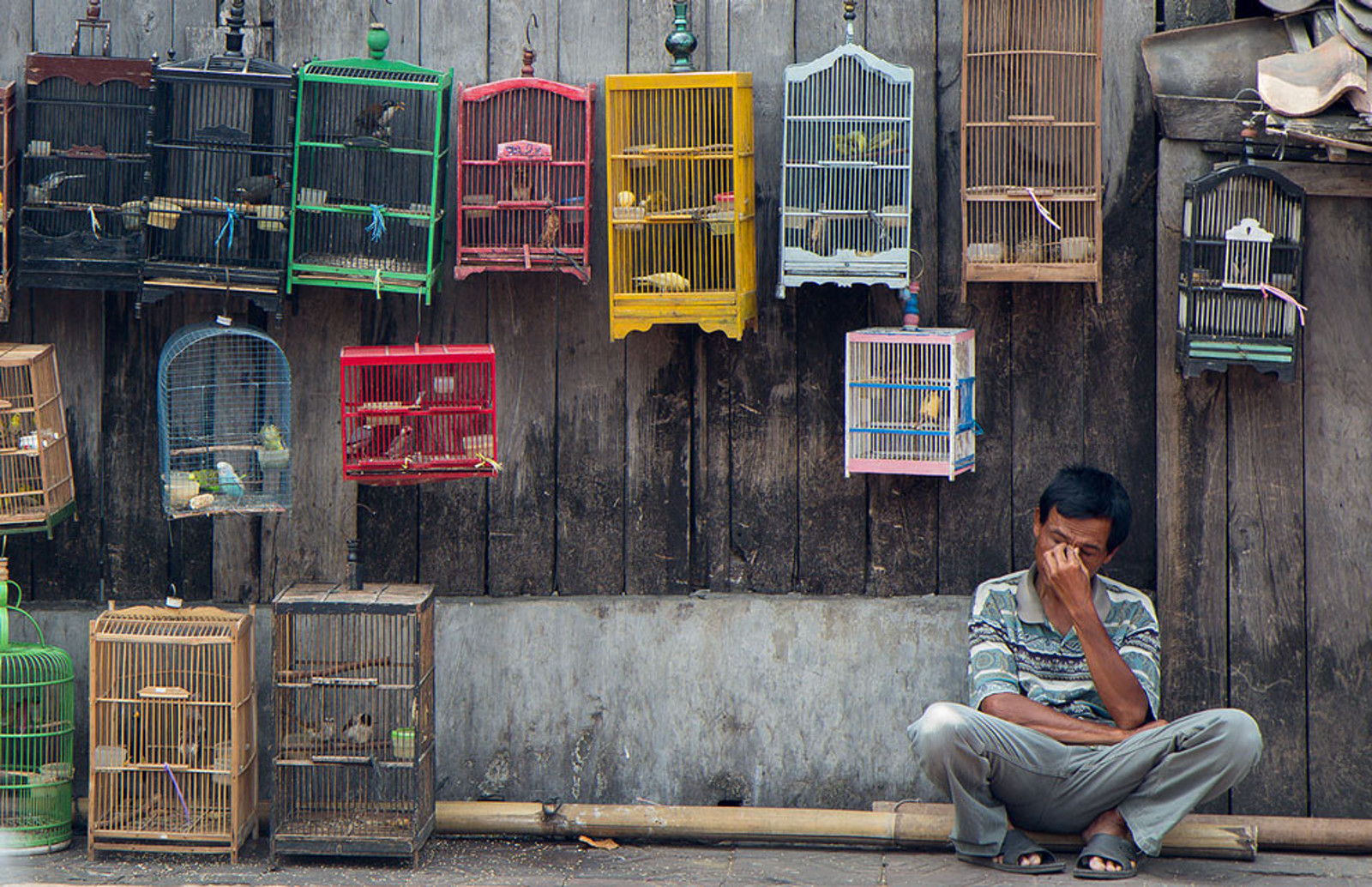 Indonesia’s markets are a feast for the senses. Fresh fish, coconuts, spices and colorful fruits tempt the eye and beckon to shoppers. Alongside foods, goods, and innumerable other curiosities, a less familiar commodity is often displayed: wild birds.

Bamboo and wire cages stacked four high crowd aisles and hang from the rafters. They contain colorful parakeets and delicate songbirds like mynas, bulbuls, and barbets whose songs blend into interwoven melodies. Their graceful notes soar, but they are all held captive, for sale.

At least 1,615 bird species are found throughout the Indonesian archipelago, including 419 endemics and 132 globally threatened species. Of these, 300 species are commonly sold, and it is estimated that 22 percent of households in the country own pet birds.

In Indonesia, a long history of owning pet birds exists, especially in Java. According to an old Javanese saying, “to be a real man one must have a wife, a house, a dagger, a horse and bird.” Consequently, many Indonesian men keep caged birds outside their homes or shops. Birdsong competitions, called Kicua-mania, are also popular pastimes, earning the owners of exceptionally sonorous birds thousands of dollars in prize money.

The countries deep seated bird-keeping tradition, and its abundance of species have made it a global center for the pet bird trade. This trade contributes nearly $80 million to the national economy.

A new study of bird markets in Sumatra seems to have confirmed a link between Indonesia’s thriving caged bird trade and plummeting bird populations in the wild.

Using market data and expert opinion, researchers from Princeton University recently found that commonly traded Indonesian bird species whose value was increasing but were harder to find at markets showed declining populations in the wild.

Additionally, they found that many species found to be experiencing population declines were not listed on the IUCN Red List or listed as declining globally.

“Basically we have a clear imprint that the trade is affecting the birds, and we now need to try and figure out the ones that are declining,” said Bert Harris, Rainforest Trust’s Chief Biodiversity Officer and co-author of the report.

Indonesia’s national obsession is slowly emptying its forests of birds and other wildlife. Despite being home to some of the most species-rich ecosystems on the planet, the poaching of birds, mammals, and other species is silencing rainforests.

The enormous demand in Southeast Asia for wildlife drives a booming illicit trade. Geckos, hornbills, pangolins, pythons, cockatoos, and a huge variety of song birds are among the many species traded in vast quantities.

With many wildlife populations on the Asian mainland already exhausted, Indonesia’s extensive forests are now becoming the main supplier of wildlife for the entire region.

However, while newspaper headlines regularly herald the most alarming examples of international wildlife smuggling, experts are warning that the domestic pet trade may pose the biggest threat for Indonesia’s birds.

Visiting a village with my students in Sulawesi, two parrots catch our eye from a house window. They are White Cockatoos (Cacatua alba), also known as Umbrella Cockatoos for their large and striking head crest. Found only in tropical rainforests in Indonesia’s eastern islands, they are classified as endangered.

Noticing our interest, a pair of young boys from the house invite us to admire the birds. To them, they are beautiful ornaments to be proudly displayed and shown off. Chained to a metal pole, they seem ghostly shadows of their wild selves.

Will Indonesia’s forests soon become haunted by the sounds of birds and other wildlife vanished from the landscape?