Palm Oil, Deforestation, and the Fast Food Industry: Would You Like a Side of Forests With That?

I travel a lot for my job and after long days on the road the one thing that gets me through is constancy. I pack basically the same clothes for every trip and try to keep up the same workout routine, but the one place it’s hard to keep things constant is in what I eat. While trying new foods is part of the adventure of travel, sometimes when I’m hot and tired from a few days or weeks in a country thousands of miles from home all I want is something familiar.

At times like that, I turn to American fast food and take comfort in McDonald’s golden arches, the cooling taste of a Coke ICEE from Burger King, or the morning rush of a frosted doughnut and sugar-spiked iced coffee from Dunkin’ Donuts. These aren’t my proudest moments, but for all of the criticisms of fast food, the comfort of constancy is its major strength. Whether I’m in Kuala Lumpur or Kansas City, Auckland or Austin, I can step through those doors and taste a little piece of home.

Unfortunately, while fast food might mean home to me, for the countless plant and animal species that call the rainforest their home and for our global climate, major fast food companies are anything but comforting. That’s because many of their ingredients, including beef and palm oil, are driving deforestation throughout the tropics.

Of Forests and Fries

The fast food industry is no stranger to deforestation. I remember in high school back in the 90s hearing about beef in fast food hamburgers destroying the Amazon. While the fast food/beef connection has been publicized for years, it’s only recently that attention has been drawn to these companies’ demand for palm oil and the deforestation it causes. In our report Donuts, Deodorant, Deforestation, UCS was one of the first groups to highlight how little the fast food sector as a whole has done to address palm-driven deforestation. Of the ten companies we scored, only four had palm oil commitments, and of those only two, McDonald’s and Subway, had strong enough policies to receive scores. 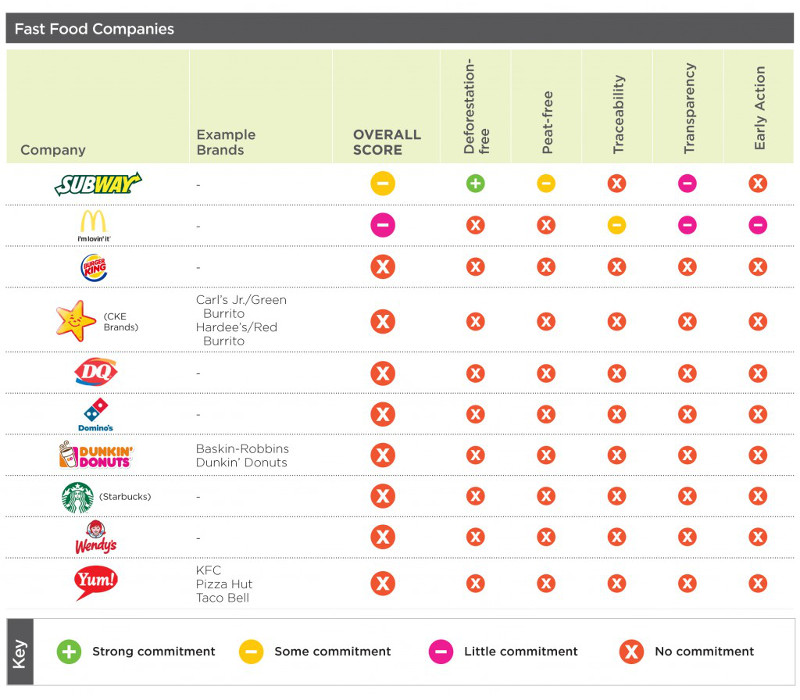 Since the release of the scorecard we have seen a wave of companies in the packaged food and personal care sectors release or update their palm oil commitments, but no new commitments from any fast food companies. However, due to pressure from groups like UCS and individual consumers, two companies, McDonald’s and Dunkin’ Brands, seem poised to strengthen their commitments. They just need a little push.

McDonald’s scored a whopping (big mac-ing?) 21 points out of 100, falling well short of what could be considered a “strong commitment.” Since then, McDonald’s released its annual sustainability report, which highlights its commitment that by 2020 100% of its palm oil purchases will be Roundtable on Sustainable Palm Oil (RSPO) certified. As I’ve pointed out a number of times on this blog, while RSPO palm oil is better than business as usual, it still leaves a lot of forests and peatlands unprotected. Further, most companies making deforestation-free commitments are pledging to do so by 2015, so McDonald’s commitment isn’t just weak, it’s also five years late. McDonald’s was the target of a Greenpeace campaign a number of years ago about soy-driven deforestation in Brazil, so it is no stranger to the issue of tropical deforestation. But so far the company has seemed reluctant to go beyond the RSPO and address all palm-driven deforestation in their supply chain.

America Runs on Dunkin’, not Deforestation

Dunkin’ Donuts has also committed to source 100% RSPO palm by 2020, but its parent company Dunkin’ Brands has no policy to cover its other brand, Baskin-Robbins. Dunkin’ Donuts, further, currently supports a “moratorium on palm expansion in rainforests and peatlands.” While this nominally recognizes the importance of these ecosystems, it makes no permanent commitment to their protection. Dunkin’ Brands leadership is already well aware of the palm oil issue, and they seem poised to release a stronger policy, but that is by no means a sure bet.

Thousands of UCS supporters have already weighed in to let companies like McDonald’s and Dunkin’ Brands know that they expect more out of their favorite brands. Earlier this month, activists held a demonstration outside of the Dunkin’ Brands annual shareholding meeting demanding that it adopt a strong palm purchasing policy. In addition, over a hundred thousand e-mails and letters have been sent to both Dunkin’ and McDonald’s leadership and management. But with McDonald’s annual shareholder meeting taking place May 22 and Dunkin’ higher-ups working on a policy, both companies need to continue to hear from consumers.

So whether you’re grabbing a Dunkin’ donut before your flight, a Big Mac on a long road trip, or just a cup of coffee on the way to work, take a second to send these companies a message letting them know that you do not want a side of forests with your meal.

To learn more about how the fast food sector performs on their commitment to sustainable palm oil, check out the UCS Palm Oil Score Card. For more on the work done by the Union of Concerned Scientists, check out their website here.