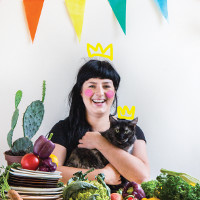 I'm the founder of the popular Polish blog Wegan Nerd, which was named Culinary Blog of the Year in 2014 and Blog of the Year in 2015 by 100 Best Restaurants in Poland. I am a graphic designer specializing in animated film, illustration, and book design. I'm also a food photographer. I teach vegan cooking and host workshops across my country and I just released my first cookbook.