Why You Should Not Buy a Pet Bird 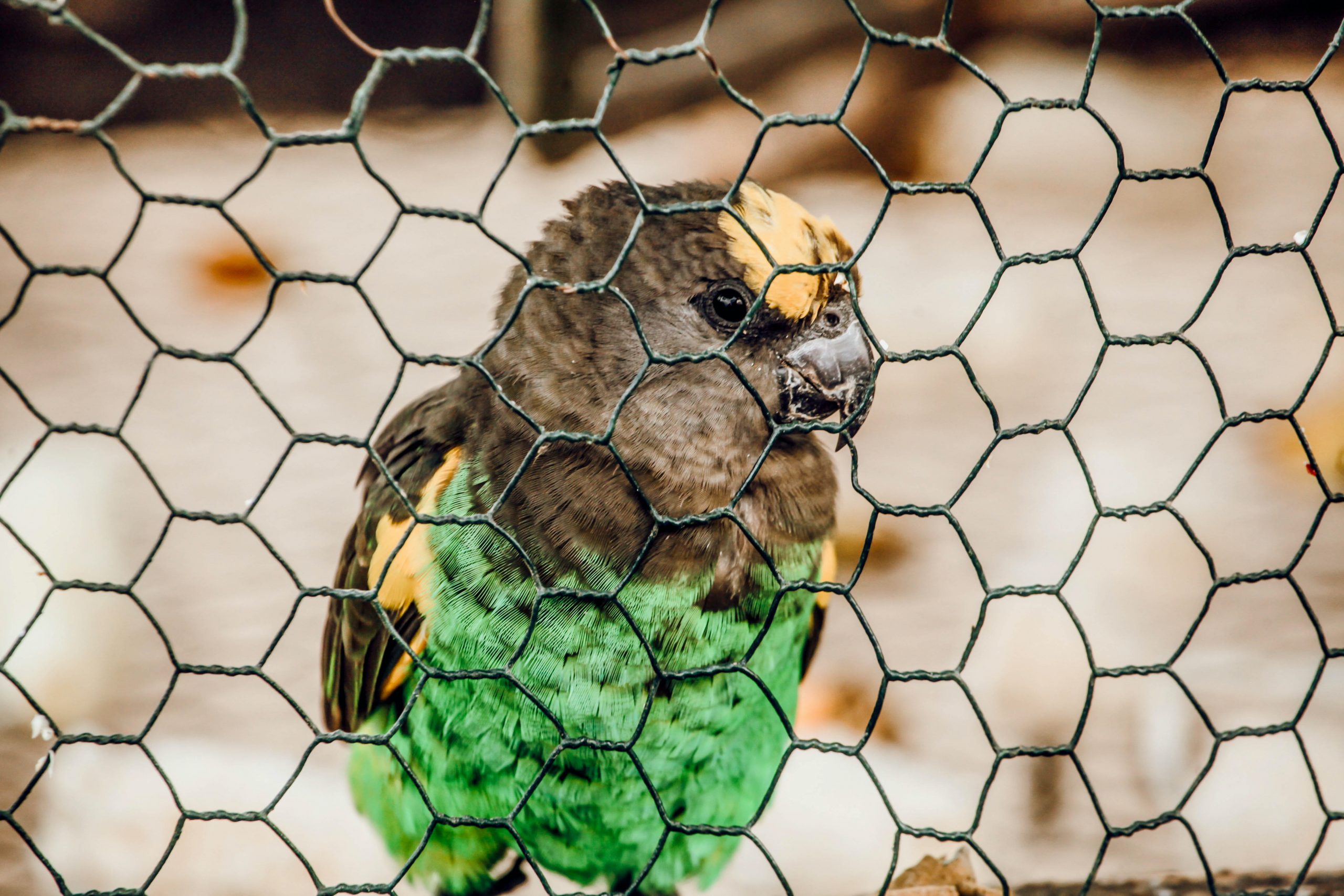 Birds are among the most fascinating animals; they can fly, they can sing, and some can even speak human words! These intelligent, vibrantly feathered creatures are popular pets due to the intrigue they inspire. Among some of the most common birds kept as pets are Parakeets, Cockatoos, Cockatiels, and Parrots. While many people might like the idea of having a bird to keep them company, unfortunately, buying a bird to keep as a pet is cruel. From breeding to smuggling to confining them in a home, birds kept as pets are often abused and misunderstood.

Recently, puppy mills are getting more attention as people are becoming aware of their cruel and exploitative practices. However, bird breeding mills are less talked about, despite having similar conditions.

These breeding mills are often immense, housing hundreds of birds in rows in cages. These cages are not designed with the birds’ welfare in mind; they are designed simply to maximize profit. Thus, these cold, metallic cages are often barren, devoid of any toys or objects for the birds to climb and play with. Similarly, isolating birds in these cages is stressful, as these creatures tend to be incredibly social and playful.

Much like in puppy mills, breeders seek to increase reproductive productivity to ensure the widest profit margin. In bird mills, breeders often take eggs or hatchlings from their parents to encourage them to reproduce again. These chicks are then hand-reared by the breeders or sold to pet stores where they are taken care of by inexperienced staff. Because many pet store workers do not know proper chick care, these baby birds can starve, develop infections, or even drown.

Hand-rearing these chicks is also a ploy to sell these birds as friendly and well-bonded with humans. However, birds raised by humans can develop issues such as feather plucking and aggression. Furthermore, taking these chicks from their parents is simply cruel and inhumane.

Smuggling is torturous and can lead to ecosystem destruction

Before the 1992 Wild Bird Conservation Act (WBCA) prohibited bringing exotic birds into the United States, 800,000 wild-caught birds were brought to the U.S. annually. While this act has provided a certain amount of protection for birds, smugglers still find unique ways to bring birds into the country.

The capture and transport process of smuggling is incredibly cruel and distressing for the birds. To avoid detection, the smugglers confine the birds into inconspicuous, tiny containers like toilet paper tubes and hubcaps. Other cruel practices smugglers use to go unnoticed include drugging the birds or taping their beaks so they don’t squawk and cause suspicion. Disturbingly, smugglers pluck their feathers so they can’t fly away and sometimes even poke holes in their eyes so they don’t react to light. In addition to these torturous practices, the birds are underfed and deprived of adequate water. Due to these disturbing conditions, it’s no surprise that 60 percent of wild-caught birds don’t make it through the transport process.

Of all the species who have fallen victim to these cruel practices, parrots have been hit especially hard.  Nearly one-third of all parrot species are now under threat of extinction due to habitat loss and the pet trade.

Confinement can lead to stress and behavioral problems

As mentioned before, birds are incredible creatures who fly, sing, and squawk. However, as the Avian Welfare Coalition notes, these intriguing traits are also what make these animals difficult to live with. Birds are supposed to fly, interact with other birds, and be noisy. Unfortunately, when living in a domestic environment, these behaviors are either impossible or cause a great deal of aggravation to their human companions.

The former consequence is extremely detrimental to the birds as their boredom and loneliness can manifest in aggression, neuroses, and self-destruction. Birds sometimes chew or pull out their own feathers to cope with stress. This self-mutilating behavior can lead to issues such as infection and tissue damage.

The latter consequence poses a risk to these birds as the humans who purchased them might grow tired of the constant noise, the claw scrapes, the aggression, and the self-destructive behaviors. These realities might result in ownership surrender, as one study specifically demonstrated when considering visible feather damage from self-mutilating behaviors.

As previously mentioned, some humans might like the idea of a pet bird, but are unwilling to deal with the realities of avian behavior. To control these birds, an all too common practice is wing clipping. Just as the name suggests, wing clipping involves cutting off the bird’s primary wing feathers to prevent them from flying.

As PETA writes, “Clipping is done for human convenience, not for the bird’s well-being.” Clipping prevents birds from being able to fly properly or altogether, which humans think makes them easier to control. However, the truth is, with simple training utilizing positive reinforcement, most birds can be perfectly safe to handle.

Clipping is also detrimental to a bird’s growth and development as their muscles might not fully develop if their wings are clipped at a young age. Similarly, if their wings are clipped before they learn how to fly, these birds might never acquire essential flight skills such as balance, takeoff, landing, and agility. Birds are supposed to fly. Restricted movement can lead to psychological and behavioral issues.

Simply put, if you don’t want a bird flying in your home, you should not get a bird.

Purchasing a bird contributes to abusive and exploitative breeding mills and illegal smuggling operations. Likewise, keeping a bird inside a house can be physically and psychologically damaging to the bird themselves. If you want to help these birds and form a bond with one, look into bird rescues and animal shelters to adopt a bird who has been rescued from these brutal industries or surrendered by their previous owner.