Why Elephant Trekking is Cruel, and Risks the Lives of Humans and Elephants 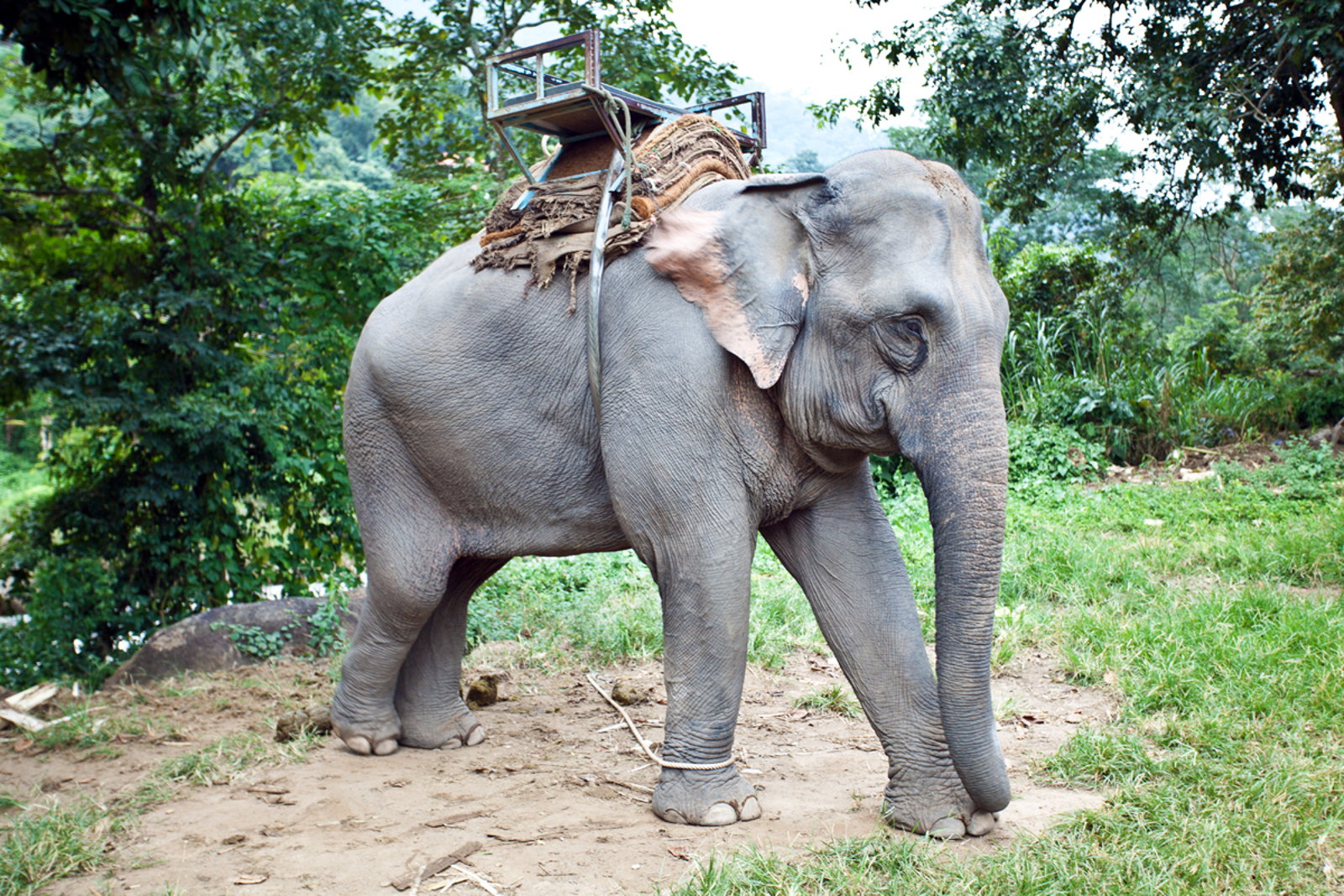 In the wild, elephants have become highly endangered. Up to 50,000 African elephants are killed by poachers every year and the Asian elephant population’s number have dwindled into the low 30,000s. Both species are vulnerable due to the ivory trade, but they are also the victims of the entertainment industry. Captured from the wild and sold to zoos and circuses, many elephants are sentenced to a life that is highly unnatural and they suffer both mental and physical ailments as a result.

The tourism industry has become a particularly striking threat to the Asian elephant population. Elephant trekking, painting camps and shows have become increasingly popular attractions for tourists visiting Thailand and Vietnam. These attractions operate under the guise that they have the best interest of the elephants at heart and that their work actually aids conservation efforts. The sad truth is that the elephants forced to perform in these settings are routinely abused and mistreated, taught to perform on cue through pain and fear.

Two trekking elephants in Thailand were recently been given the title of “Killer Elephants” by local media after they were involved in the deaths of their trainers. In these two incidents, it is believed that the elephants acted out and killed their mahouts (trainers) due to a surge of testosterone related to musth. Musth is the stage in a male elephant’s life when they reach sexual maturity and become aggressive due to an influx of hormones. Because the trekking industry is motivated by profit alone, there is little regard for the lives or safety of the elephants or people who work with them. Both elephants involved in these incidents had been showing signs of musth, but they were forced to work and carry tourists nonetheless.

In the wild, elephants are gentle giants. They can protect themselves from predators, but they are not usually characterized as aggressive or vengeful beings. In the case of the two elephants who killed their mahouts, their actions have been explained as brought on my a fit of musth. According to the Phuket Gazette, “Musth is a period of heightened sexual excitement in bull elephants, characterized by highly aggressive behavior that coincides with a surge in testosterone levels.”

For the Asian elephant, musth is onset between the ages of 20-25. The elephants who were involved in these unfortunate events were an 18-year-old bull elephant, Plai Meaw, and 23-year-old bull elephant, Plai Por. When male elephants experience musth they get a surge of testosterone that is about 10 times higher than normal and as they result they act out aggressively. It is well known that this period in a captive Asian elephant’s life makes them highly dangerous to people and renders them uncontrollable, even to mahouts with bull hooks.

It is estimated that near 100 people are killed every year in India by elephants, musth is thought to play a role in many of these deaths. In the wild, bull elephants fight one another for mating territory when they are in musth. While humans wouldn’t normally be present during this time, there have been instances where wild elephants have acted out aggressively towards humans who have come into contact with them in the wild.

In the wild, elephants experience musth for a period of two to three weeks, but it has been documented that in captivity, musth can last from four to six weeks, sometimes even up to two months.

According to a report in the Phuket Gazette, Plai Por had been exhibiting the signs of musth over the weekend but was allowed to carry tourists none-the-less. Plai Por flew into a fit of rage when his trainer went to unchain him and eventually crushed his trainer against a tree. Plai Meaw was also allowed to interact with tourists and is believed to have been overcome with a musth fit while carrying two Russian tourists. After trampling his trainer, Plai Meaw ran off into the forest with the two tourists still strapped to his back.

The Life of a Trekking Elephant

To understand what lead to the death of these trainers, it is important to first understand how a trekking elephant is made. Yes, made. Elephants, like all other wild animals, are not naturally inclined to act at the will of humans. Carrying heavy people for extended periods of time, trekking through hot temperatures and unpredictable weather is not one of the survival skills that the elephant developed over thousands of years of evolution. In order to get elephants to willingly submit to being used as a vehicle, they have to go through a breaking process known as “phajaan.”

At a young age, elephants are taken from the wild, separated from their mothers and enclosed in a small wooden enclosure where they are chained for an indefinite period of time. They are then starved and beaten by their mahouts until they have successfully learned to fear nails and bull hooks and to obey their human masters.

When elephants have graduated from the phajaan process, they are taught to carry people and to follow the commands of their mahouts based on sharp prods of either a nail or bull hook that directs their movement. When elephants are not working, they are kept on short trains in trekking camps. Elephants naturally form extremely close bonds with family members and friends, but in camps they are isolated.

These elephants are rarely given breaks from carrying paying tourists in the intense sun and heat. Wild elephants need to cover their skin with dirt or mud to protect themselves from painful blisters or sunburns, but trekking elephants are never allowed this opportunity. As the result, many suffer from painful burns – all while having to endure the weight of people on their backs. They are also not given ample access to food or water. Essentially, these elephants are treated like a non-feeling machine, used to transport people.

The Dangers of a Cruel Industry

Despite evidence that these elephants were exhibiting signs of musth, the were still allowed to carry tourists and interact with their trainers. The risk associated with doing so was likely motivated completely by profit. The elephant trekking industry has illustrated a clear ambivalence towards the health of the animals they care for, as evidenced through the pain and abuse they inflict on elephants. Further, the two tragic deaths of these mahouts demonstrates that safety is hardly a number one priority for these camps. Elephants who are kept in stressful environments day in and day out are prone to act out from that fact alone. These creatures are naturally gentle, but they are also incredibly intelligent and cognizant of the torture they are being forced to endure.

Blaming these deaths on musth shifts the blame away from the trekking camps and onto the elephants. It is also notable to mention that after these two incidents, both elephants have returned to carrying tourists.

The best way to end the abuse of Asian elephants and to keep yourself out of a dangerous encounter with an overworked pachyderm is to not purchase a ticket. Supporting elephant tourism, is supporting elephant abuse. Knowing what we do about these highly endangered animals, we must do all we can to protect them and to keep them wild.