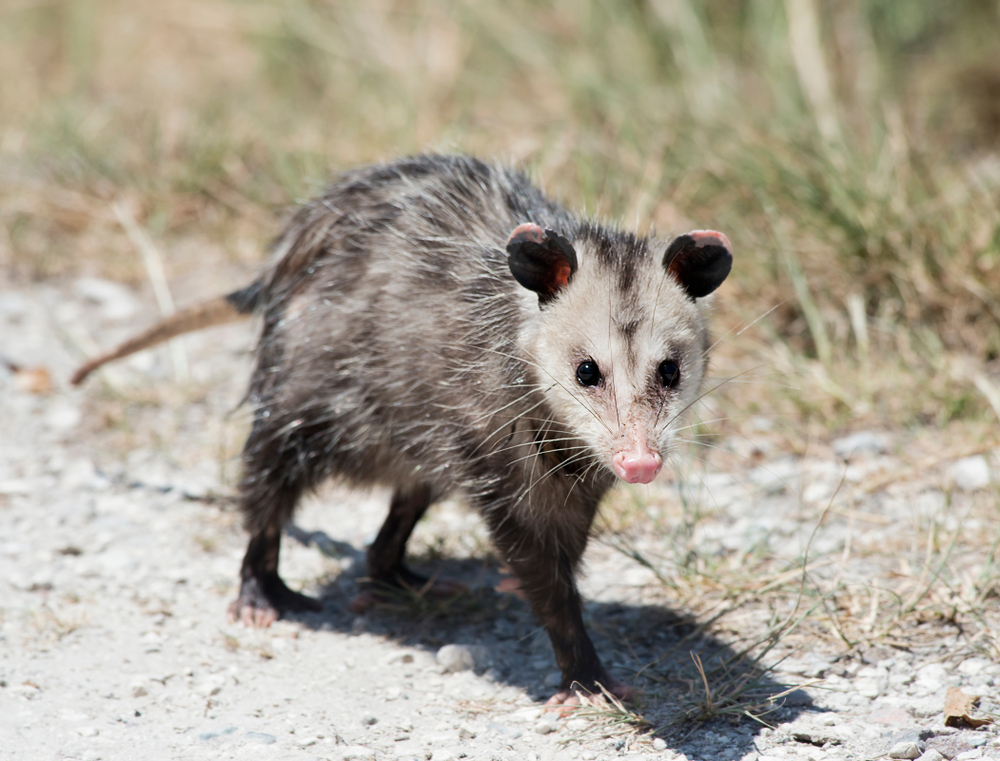 Update (12/31/19): Good news! No public opossum drop occurred on New Year’s Eve, and all indications are that no private drop occurred, either. Mayor James Reid of Andrews stated: “Times are changing. Our plan is to have an awesome party and not have any live animals involved whatsoever.” However, the law 2015-73 has not been repealed and opossums still remain in danger every year from December 29 through January 2.

Opossums are a very misunderstood species; they are not rodents like many people believe, but marsupials – and the only marsupials in North America at that! Just like kangaroos, opossum mothers carry their babies in their pouches and, when they are born, little opossums are perfectly tiny and hairless. Unfortunately, opossums are often thought of as ugly or creepy – but all of those adjectives lose their validity as soon as you look at one of these cute little animals.

A group of people in Brasstown, North Carolina, get together every December 31 to celebrate the new year by hoisting a live opossum in a plexiglass box above a public stage and then lowering the animal at midnight (a la the Times Square ball), for fun.

What is an Opossum “Drop”

Opossum experts, including veterinarians and wildlife rehabilitators, have testified about the harm done to the opossum before, during, and after the opossum “drops.” They state that stress cardiomyopathy, capture myopathy, and stress-related dermal septic necrosis are common in opossums and can be fatal. We know from the opossum “drop’s” history that the event almost invariably causes one or more of these conditions in the trapped opossum, who are by nature shy and timid animals and are afraid of humans.

North Carolina General Assembly § 113-291.13, Application of wildlife laws to opossums
No State or local statutes, rules, regulations, or ordinances related to the capture, captivity, treatment, or release of wildlife shall apply to the Virginia opossum (Didelphis virginiana) between the dates of December 29 of each year and January 2 of each subsequent year. (2015-73, s. 1.)

We call this statute North Carolina’s Be Cruel to Opossums law because it not only enabled the Brasstown “tradition” to continue, it also opened a five-day window each year that completely removes legal protections for opossums statewide.

Note: The recently passed federal animal cruelty law does not apply to the opossum “drop.” and there’s little local opposition to the event. This is a small and somewhat isolated rural community in the Appalachian Mountains.

The opossum we now call Millie was injured and sick when she was hoisted into the air in the town’s Heritage Park at 10 pm on December 31, 2018, and dangled for two hours above the raucous Andrews crowd, while music blared and fireworks were set off. After she was haphazardly lowered to the stage at midnight, she was whisked away by two caring locals who had been promised by the event’s founder and organizer, Clay Logan, that they could take her. (Fun fact: he’s a county commissioner.)

Left untreated by her “handlers” before the event, Millie’s injuries led to an infection so severe that the rescuers reported they could smell it on the stage well before they even reached the box.

The veterinarian who treated Millie after the event stated that her injuries were consistent with those caused by leghold traps and snares. She had suffered both prolonged loss of circulation to her left front paw and a broken bone in her left front leg.

Amputation was necessary to save Millie’s life.

She is learning to get around on three legs, though you can still see her left shoulder joint at work in its futile attempt to move her phantom limb.

An effective approach to fighting animal cruelty is to marginalize it. This shouldn’t be hard with the opossum “drop,” as it was already in the margins before the North Carolina General Assembly (NCGA) ill-advisedly legitimized it. The NCGA isn’t exactly a bastion of progressive politics, but animal cruelty – at least the non-institutionalized variety – is condemned by Democrats, Republicans and Independents alike.

Just as roadshows featuring diving mules and chimpanzees on rollerskates have been pushed to the margins and off the page, so must and so will opossum “drops.”

This is not a Brasstown issue. This is a North Carolina issue, and surely a majority of North Carolinians will recognize their representatives should correct the mistake made by the General Assembly in 2015 and repeal SL 2015-73. Millie is going to help us in this regard. She is surviving proof of the injustice of this ridiculous law.

Click here for a list of actions you can take to honor Millie and to relegate opossum “drops” to the dustbin of history, including signing this petition!