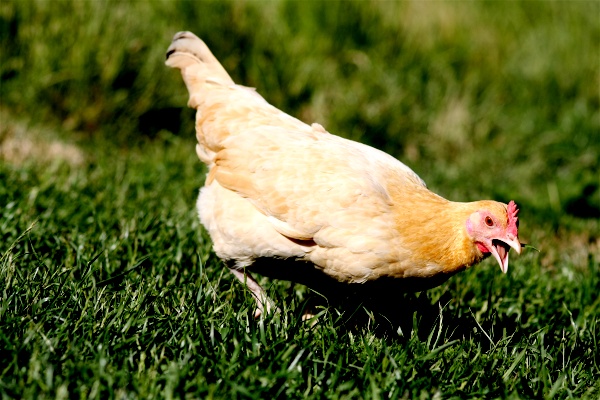 People in Minneapolis who love chickens have reason to celebrate. On April 2nd, urban farmers joined the Mayor at Dowling Community Gardens to sign an amendment to urban farming regulations mandating that all chickens in the city – in fact all animals – be safe from harm and well cared for by their guardians. With the passage of the new law, chickens are viewed by the city more like companion animals, and less like livestock.

In order to assure that residents give chickens the best possible care, Minneapolis only allows such “farm” animals to be kept on residential property. The permitting process for small animals like chickens will continue to be refined to improve the care required for these animals.

Moving forward, animals can’t be kept on a community garden, market garden, or urban farm. And the most crucial safeguard? Slaughtering animals is prohibited. The codes up until the amendment were vague, poorly written and barely enforced, causing much animal suffering. So what caused the change?

Since 2001, countless examples of neglect, abandonment and abuse of captive animals have been compiled by Chicken Run Rescue, a local organization that provides care for the outcasts of urban farming. It took many years and many lives, but city planners eventually saw that good public policy and urban animal farming do not mix. City Council recognized that it lacked both the resources to insure protection of the animals, and the means to control the proliferation of urban animal farms.

One example is the JD Rivers Garden Project, hosted by Theodore Wirth Park. The children’s summer program decided that chickens would be a good addition to their urban garden. They built chicken enclosures by hand using scavenged materials such as chain link fence, old doors and beat up plywood. The chickens were often left unattended in the public park with only a ramshackle coop to protect them. It was certainly an educational experience for the young students in the summer program, but the lesson learned was not the one intended.

During the summer when chickens lived at the park, cages were repeatedly vandalized, and one day the chickens disappeared. Neighbors watched this drama unfold over the course of the summer, and children attending the programs discovered that the chickens they had named and cared for had been stolen, their hand-built enclosures broken open.

As one neighbor wrote in a letter to City Council, captive animals in public places are easy targets for predators – of both the human and animal type.

Many of the problems associated with keeping “farm animals” on city lots are caused by inadequate laws that should prohibit keeping them in the first place. At Chicken Run Rescue, one of the only places that accepts abandoned chickens in the region, the rate of people looking to surrender unwanted chickens increased almost 800% since 2001. And these numbers don’t factor in the countless other animals given away on craigslist.org, local “poultry swaps,” or killed by owners when they are no longer desired.

Nonetheless, by discouraging the use of animals solely as agricultural “production units,” the safeguards Minneapolis created will at least prevent the worst abuses.

As cities across the country consider urban farming laws, many ideas emerge in debates over food access, food justice, and sustainability. Sometimes people think that getting chickens might be a good way forward, but many important questions often get overlooked. Justice for who? Sustainable in what ways?

When residents add animals to their urban farms, the scale and intensity of activity on that plot of land becomes increasingly problematic. Examples of animal abuse, neglect and abandonment increase when animals are kept on urban farms, as Minneapolis has learned the hard way.

All of this is in addition to the routine harm done in all forms of animal agriculture. Male chickens are killed as a matter of course because egg farmers don’t profit from them, and male goats are slaughtered so that their mothers can be milked without babies “stealing” the milk. Rabbits only have one use on an urban farm. For these and many other reasons, progressive cities such as Minneapolis have made it clear that community gardens, market gardens, and urban farms should be animal free.

For Growing Lots, a Minneapolis CSA, similar problems started when the owners decided to go into the egg farming business. Local kids saw the chickens as an attractive nuisance, and vandalized the CSA on numerous occasions. But when the kids tore open the fence and chickens were discovered roaming the nearby city streets, Animal Control was called and Growing Lots was busted for not having the appropriate permits for their operation.

But what problems are we trying to solve by starting urban farms to begin with? It took Minneapolis years for such questions to be adequately addressed, and many animals suffered needlessly as a result of the city experimenting with captive livestock animals on urban farms.

Many other municipalities currently revising urban farm animal policies will inevitably need to go back to the drawing board once the long-term negative consequences of urban animal farming become apparent. While not perfect, the recent amendment in Minneapolis has gone a long way toward fixing some of the structural injustices created by encouraging residents to keep animals as a part of the urban farming initiative.

With the new laws in place, residents are empowered to pursue urban farming, urban gardening, crop-sharing, and building local businesses selling crops, to feed themselves and their community. Lack of access and unequal distribution are serious issues that can be mitigated using sustainable, healthful and humane farming practices.

“Advocates should consider adopting chickens and take an active role in advocating for them as companion animals as this trend continues, and promote a plant based diet as the truly sustainable way forward,” said Mary Britton Clouse, of Chicken Run Rescue.

Minneapolis can serve as an example to other cities that are considering adding animals to their urban farming laws. The city has taken great strides toward achieving food justice, while encouraging residents to grow bountiful crops without putting animals in danger.