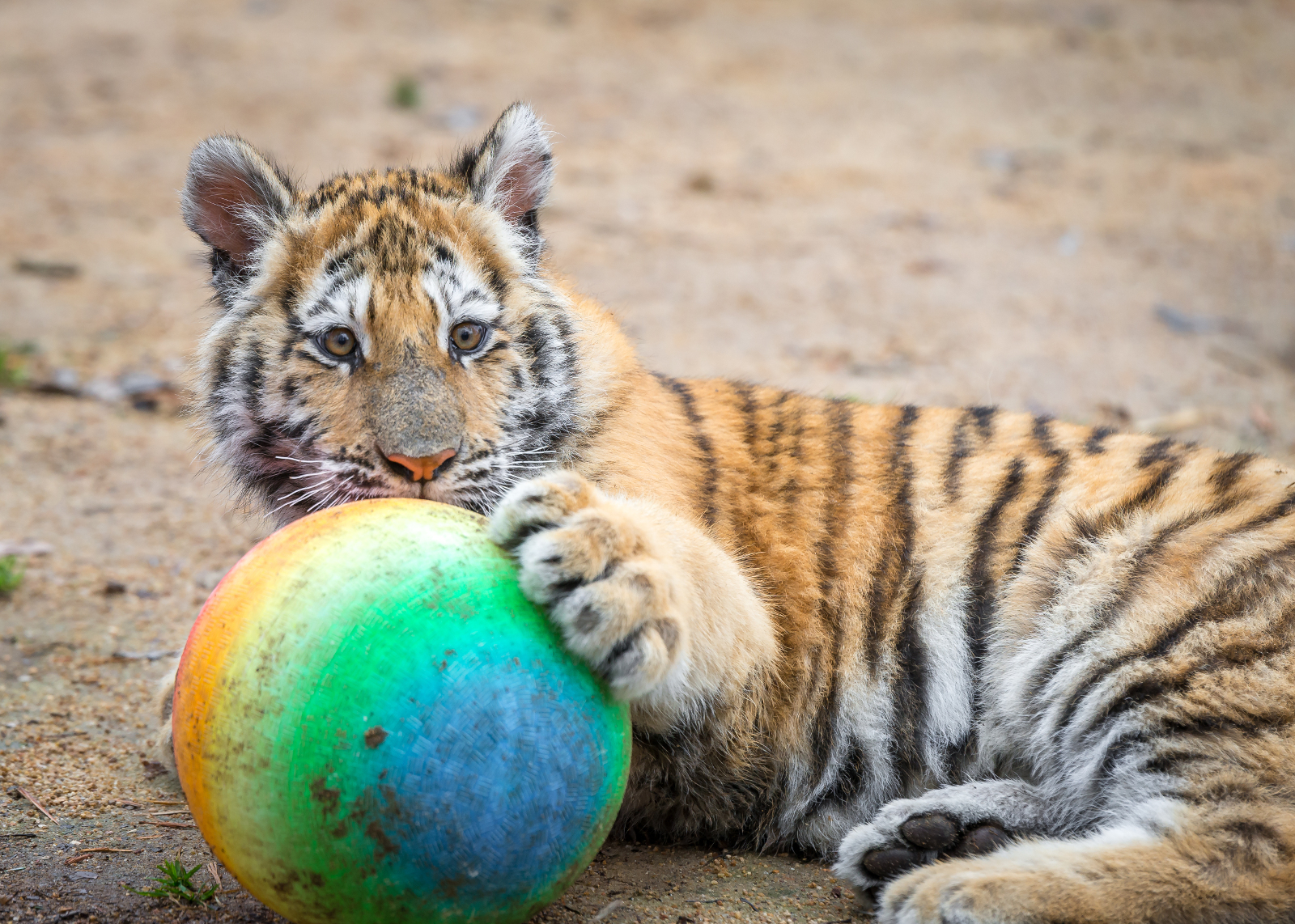 “If I only make a fraction of the impact that Sampson and the other cats have made on me, then I am very blessed.”

Days like this are when I realize how fast time flies and how special each moment is.  Today, I’m spending a few of the last days with Sampson, the caracal.  At 17, he’s spent his entire life here at The Wildcat Sanctuary.  He was our second resident and I remember him being a little ball of red fur and fire, hissing non-stop.  Over the years, we became very close and he was the most easygoing caracal anyone had ever met.  His best friend, Cleo the serval, was the first resident to call TWS home. 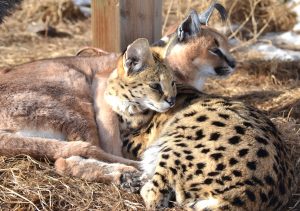 17 years has gone fast.  I feel like it’s the end of an era. The original cats have been here from the beginning since I had the first crazy notion that I wanted to make a difference in the lives of animals, but had no idea how I was going to do that.

As a young girl, I was always eager – eager to do as much as I could in as little time as possible.  Some would say I haven’t changed much. In high school, I started attending college when I was just 16.  After high school, I double majored in marketing and advertising, graduating in 3 1/2 years while holding down a job.  I knew I wanted to work my way up the corporate ladder as fast as possible in a creative advertising agency. 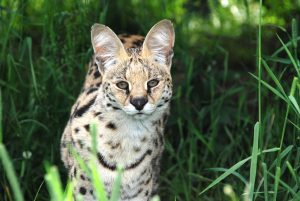 I worked for a few smaller agencies before being recruited to The Coca-Cola Company in Atlanta.  I was the youngest in their marketing department and the first to be hired without a Master’s Degree.  Later in my career, I worked for many international, high profile companies, too.

After that, I decided to volunteer for a few organizations only to find out they were breeding and selling.  Each time I volunteered, a favorite animal would be gone and a new one would appear.  I never got straight answers. Once, an owner wanted to prove to me he did nothing wrong and asked me to accompany him to pick up a baby cougar.

What I saw that day, I’ll never forget. Metal corn cribs cut in half, turned on their side to create an 8 x 12 space no higher than 5 feet at the tallest point.  On one side was a severely scarred leopard with fur missing and flattened feet due to a declaw.  The owner said the leopard had been in the house when she was younger and been burned by boiling water.

I looked to the right and tears welled up in my eyes.  There was the male lion I’d loved so much, that I’d volunteered to care for at the other facility.  He’d been traded for the cougar kitten we were picking up today.  He could barely turn around in the small space, his face was bloody from scraping the fence and his paws were raw from the hard surface he paced on.  He was a shell of the cat I’d met before.

I didn’t know how I could help from so far away, but I had to do something.  My mom had given me a Parade Magazine featuring actress Tippi Hedren and her big cat preserve.  I dialed the number in the article and, to my surprise, Tippi answered the phone.  She committed to finding a sanctuary for the tiger if the trainer would relinquish custody.  It had only been hours since the first phone call, but when I called back, the tiger had already been killed and put on dry ice.

Tippi and I were outraged and quickly became friends. She mentored me and introduced me into the sanctuary world for big cats. I incorporated in 1999 to do advocacy and education for big cats, but quickly learned more sanctuaries were needed.  Tippi told me, “You have to quit thinking you are saving big cats by getting them surrendered and sending them to other sanctuaries, you need to become your own sanctuary.”

It began on two small acres in a suburb of Atlanta, then moved to five acres in the country.  Running a nonprofit was harder than I thought, so I moved back to my roots in Minnesota bringing our 10 cats to 10 new acres.  After a zoning dispute over a geriatric tiger I rescued named Meme, we moved north to 40 plush acres in Sandstone, MN where we reside today. 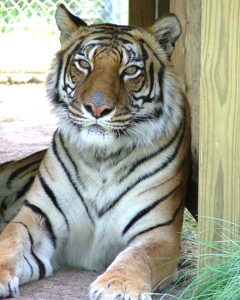 Life came full circle as it often does.  Just weeks after moving to our property in Sandstone, MN, we were contacted by authorities that Cynthia Gamble had been killed by one of her performing tigers just five miles down the road.  I knew that property all too well.  It had been years since I’d been there.

My heart sank when I heard it was Titan and Tango – the two cubs that I’d met years earlier on the photo shoot.  They’d been through so much through the years.  Another tiger, Lilly, was also on the property and had her own troubled past.  All had been through starvation multiple times.  Titan and Tango survived when 30 other cats perished in the barn from dehydration and starvation just a few years earlier. 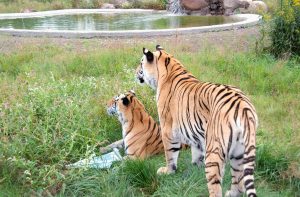 Lilly and her love Titan at TWS

Since 2006, with your help, we’ve built out 40 acres to provide natural habitats for rescued wild cats, added an onsite hospital to treat our ever growing geriatric population, built a talented and compassionate team, became a leader for change nationally through our advocacy work and supporting legislation to stop the breeding and ownership of big cats as pets, grew our onsite internship program to help educate future animal advocates, mentored other sanctuaries to expand the number of homes available to rescued cats and acted as placement officer to coordinate national rescues with dozens of big cats needing placement at a time. 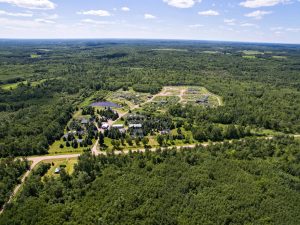 What you’ve helped us accomplish is amazing.  I’m thankful for that daily.  But still, on days like this, as I experience the last chapter in a very special cat’s life, all goes silent.  It’s as if time stands still – or I just wish it to in order not to have to say goodbye.

I know that Sampson is one of the lucky ones.  Arriving at a very young age, he has never known the abuse or neglect many of our other residents have.  He has only known love and kindness. But more importantly, he changed our lives.  He was one of the first to teach us why wild cats should not be pets, why they need special care and deserve to live wild at heart. 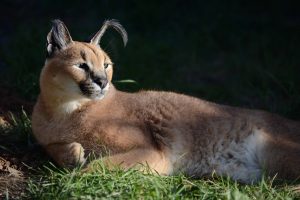 Sampson, one of our first residents

People say I’ve built a legacy, but it is their legacy.  If I only make a fraction of the impact that Sampson and the other cats have made on me, then I’m very blessed.  Because their legacy inspires change and only in their legacy can we end the captive wildlife crisis.  It is the best way we can honor each and every one of them.

For now, I choose to celebrate the very special days and weeks ahead as Sampson and other founding cats move to the next chapter in life.  And with your continued support, we will also start a new chapter here at The Wildcat Sanctuary by welcoming new cats that need refuge who will be just a special as the first to call TWS home.