Lessons I Learned From Rescuing a One-Eyed Chihuahua 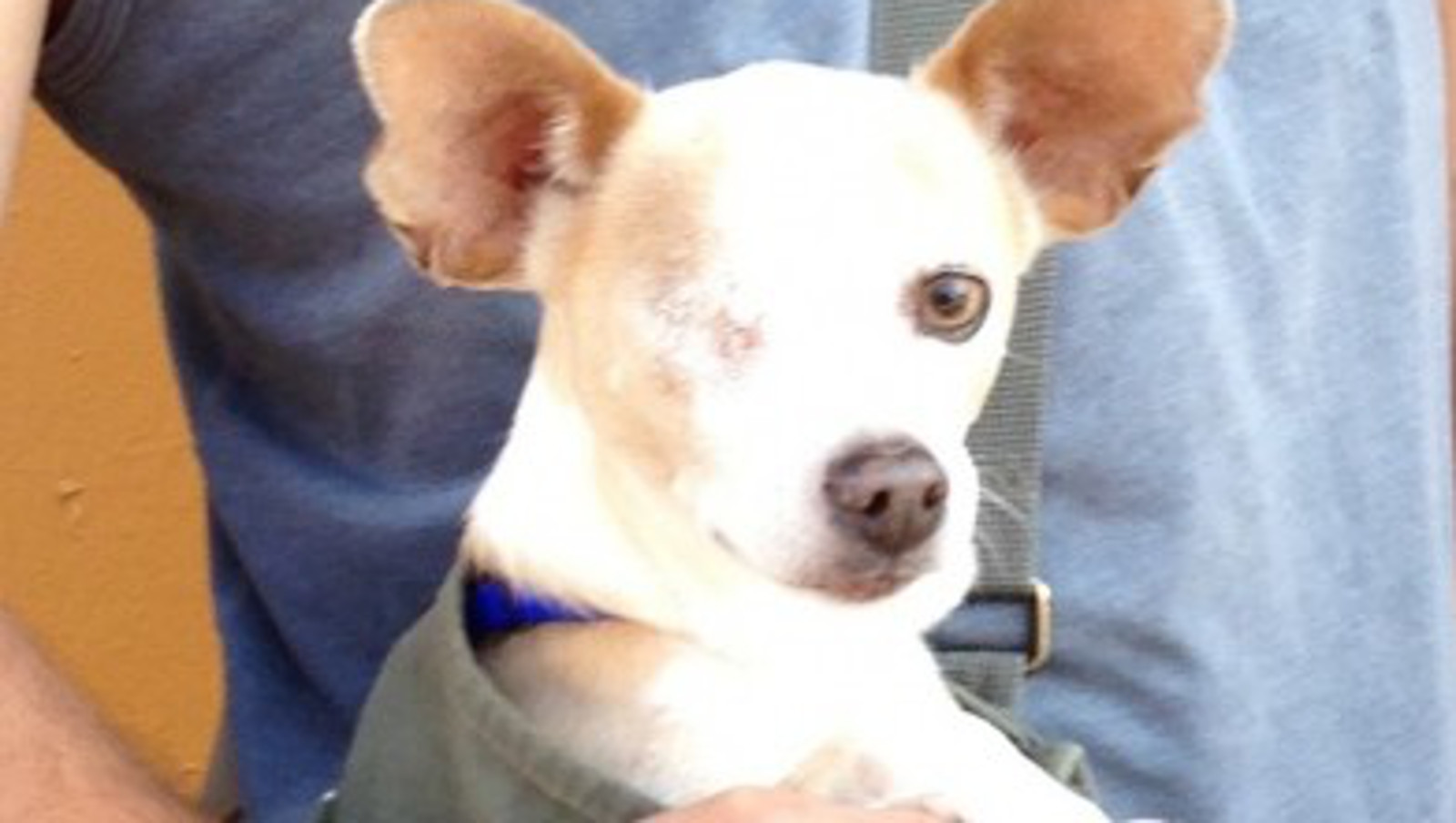 It was a love started in the most modern way: Facebook. The Fuzzy Pet Foundation, which works to save injured, disabled, and abandoned animals, shared its newest extreme rescue: a one-eyed, emaciated dog with a broken spirit. Something about the expression in his eye made my heart swell. Rescuers speculated that this poor Chihuahua-mix, later named Boombi, had been used as bait for illegal dog fighting, and it was clear that he would need alot of TLC to trust humans again. I didn’t know if I could help him, but I knew I had to try. It was then that I asked to be his foster.

Boombi had many challenges stemming from his life of abuse and neglect. He didn’t dare trust another person and would hardly let me touch him for the first three weeks. At night, he would stay frozen in his crate, clinging to a stuffed tiger squeaky toy, the only thing that provided him comfort throughout his rescue. I had been warned to never touch his back as it would send him into a tail-chasing frenzy for what seemed to last forever. He also suffered from occasional seizures, which his vet said was due to head trauma he had suffered in his earlier life. There were moments when I wondered if it was too late for Boombi. It seemed that the distress from whatever he had gone through, dogfighting or otherwise, that took his eye, resurfaced constantly. But then, something amazing happened… One morning I woke up to find Boombi snuggled next to me on my comforter, gazing at me with that deep golden eye, I knew something had changed. Slowly, but surely, Boombi learned to trust, love, and live without fear.

Boombi shows off his happy smile. 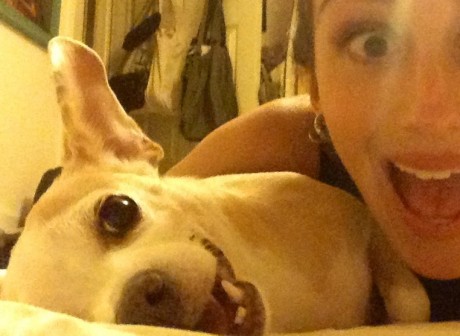 Over time, Boombi transformed into a new dog, but he wasn’t the only one who changed. Seeing him overcome struggles no one should ever have to face, inspired me to be a better person too. Here are the lessons that caring for this wonderful one-eyed Chihuahua taught me:

The day I signed the adoption papers for Boombi, my roommates and I had a party. We decided to make it a Boombiversary of sorts, with a spread of tapas, sangria, and Boombi’s favorite treats. When the volunteer from the Fuzzy Pet Foundation came over with the documents, she was delighted to find a handsome, stocky Boombi eagerly jumping into her lap. After over a year, he recognized her right away, she was one of the first people to show him kindness when he was rescued, and he never forgot.

Boombi still bumps into things – hence the name “BOOM!-bi” – every once in awhile. It also takes time for him to warm up to new people. When I take Boombi to outdoor cafes, the beach, or his favorite park, I warn people who want to pet him – I mean, who can resist that one-eyed stare?  I explain to them that it’s best to admire him from a short distance. Occasionally, I’ll envy the person with the big, floppy, all-American dog who wants to play and shake paws with everyone. But Boombi’s challenges make him special and deserving of as much love as any other dog. At the end of the day, no matter what struggles he has, his warm heart and caring soul make everything worth it. If given the chance, I would pick Boombi again and again.

Besides, he’s quite dapper too. 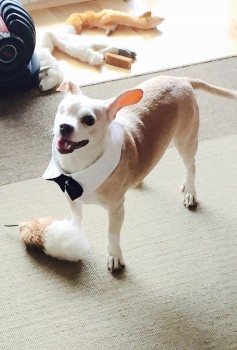 It was Boombi’s discerning taste that chose my husband, Nick. The first time the new fella in my life came to visit my apartment, I left the room to make coffee. When I came back minutes later, Boombi was lying on Nick’s chest, gazing at him fondly. It was an unprecedented moment: by far – far – the fastest Boombi had taken to warm to a new person. 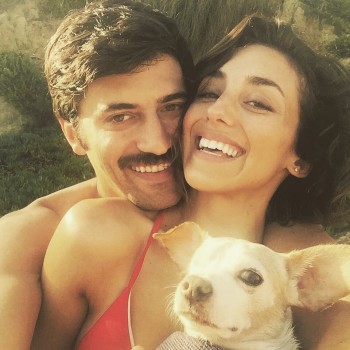 4. Special Needs Animals Need Us … and We Just Might Need Them

Every year, animal shelters take in 7.6 million companion animals and 2.7 million of those animals are euthanized. Special-needs animals like Boombi have even less a chance to make it out alive.  If we want to help lessen the suffering caused by animal homelessness and overrun shelters, adopting a companion animal rather than buying is an absolute must.

Boombi now loves to be close to his family. 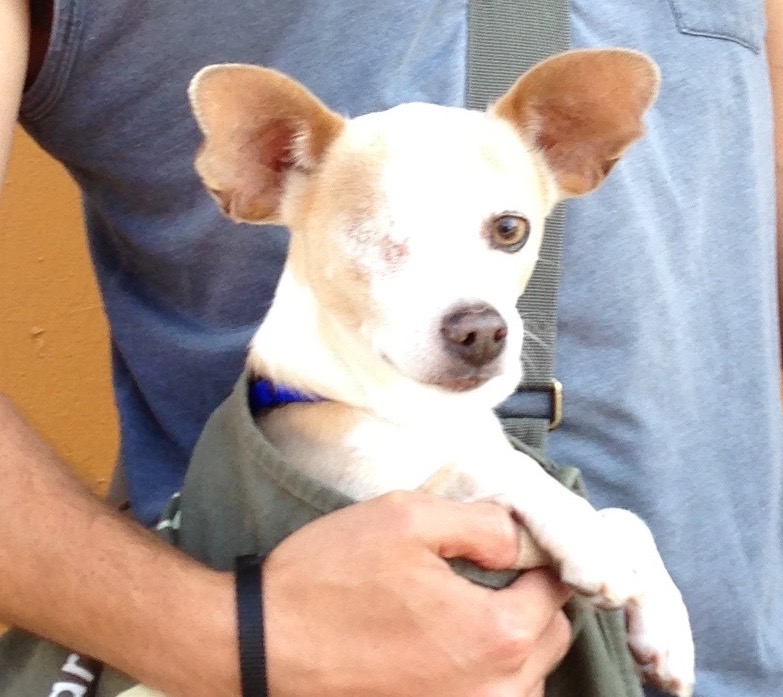 If you never thought before of adopting or fostering a special-needs animal, consider this: you don’t need to be the most experienced. You just need to have love to give. You’ll be amazed at how the minor inconveniences can be assuaged or even forgotten when love flows in through the cracks to where it was previously a void. When Boombi stares at me like this as I type, I feel all the appreciation I need, and can’t wait to take a cuddle break to show how much I appreciate him.

Excuse me, mom. It’s time for a cuddle session. 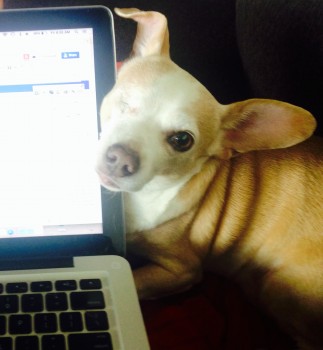 6. View Challenges as Opportunities for Growth

When Boombi and I moved in with Nick, the tiger squeaky toy he clung to as a puppy, while scared in his crate, had disappeared. Boombi had plenty of new toys, a basket full of them, in fact – and I thought nothing of it, until over a year later. Recently, when moving some dusty records off the bookshelf, I saw something fall to the ground. I didn’t hear it land, so I continued to rifle through the records until I heard that familiar squeak. Turning, I saw Boombi rejoicing over his reunion with his old friend, the dulled orange stripes sticking out of his mouth as he pranced around the living room. Suddenly, the memories came flooding back to me, the long nights of seizures and barking and tail chasing, the shaking, skinny little boy who arrived in a crate with just a tiger to his name. I would do it again in a heartbeat.

Boombi and I taking on the world. 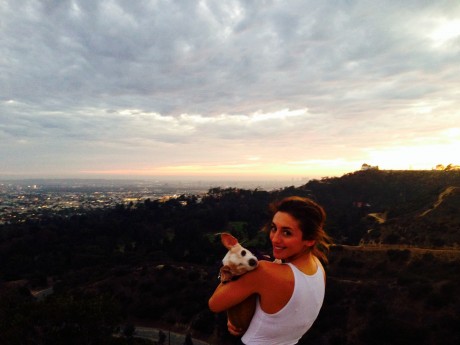 To find out more about The Fuzzy Pet Foundation, check them out on Facebook. To donate, visit their website here.