When Laurelee Blanchard became aware of the suffering of animals in the agriculture industry, her entire life changed. While most people have an “a-ha!” moment when they learn how animals are treated in industrial agriculture and stop consuming animal products, Blanchard resolved to go one step further.

In 1999, she left a successful career in commercial real estate to devote her life to rescuing animals. Simply donating money to a cause just didn’t seem like enough; she wanted to really dive into the movement and use her skills and determination to create change. With this in mind, she became director of communications for FARM (Farm Animal Rights Movement) and also worked as a campaign consultant to Farm Sanctuary. But again, she felt that there was still more that she could do for animals, so she took all her life savings and founded Leilani Farm Sanctuary in 2008. Since, Laurelee has established a thriving haven for farm animals and even launched an incredible interactive program to help children learn the importance of compassion as well.

Leilani Farm Sanctuary is a safe haven, located in Haiku, Hawaii, which is home to more than 200 rescued animals. Some of Laurelee’s residents include chickens, donkeys, Guinea pigs, ducks, cats, rabbits, geese, pigs and tortoises – all needy animals are welcomed here.

While leaving her entire life behind to start an entire farm sanctuary might seem drastic or extreme to others, to Laurelee it only seemed logical.

“Living a purpose-driven life gives me a feeling of making the best use of my time on this earth,” Laurelee tells One Green Planet, “Devoting my life to helping animals is my way of coping with the knowledge of the horror experienced by animals every minute of every day.”

Offering a safe haven for animals, Laurelee works to repair this damage and hopefully spread her message of compassion to help animals far from the bounds of her sanctuary. One way that Laurelee helps to do this is by highlighting the amazing personalities of all the animals in her care.

Laurelee explains to One Green Planet that all the animals are individuals, something that is readily apparent when people come to tour the sanctuary. When visitors first arrive at the sanctuary, they are promptly greeted by Rufus, a big red rooster. While this rooster gives off the impression that he has always reigned as King of this farm, he — like many of the other animals at the sanctuary – was abused by his previous owners. Laurelee discovered Rufus dumped at the sanctuary’s gates one night and instantly welcomed him into the family. 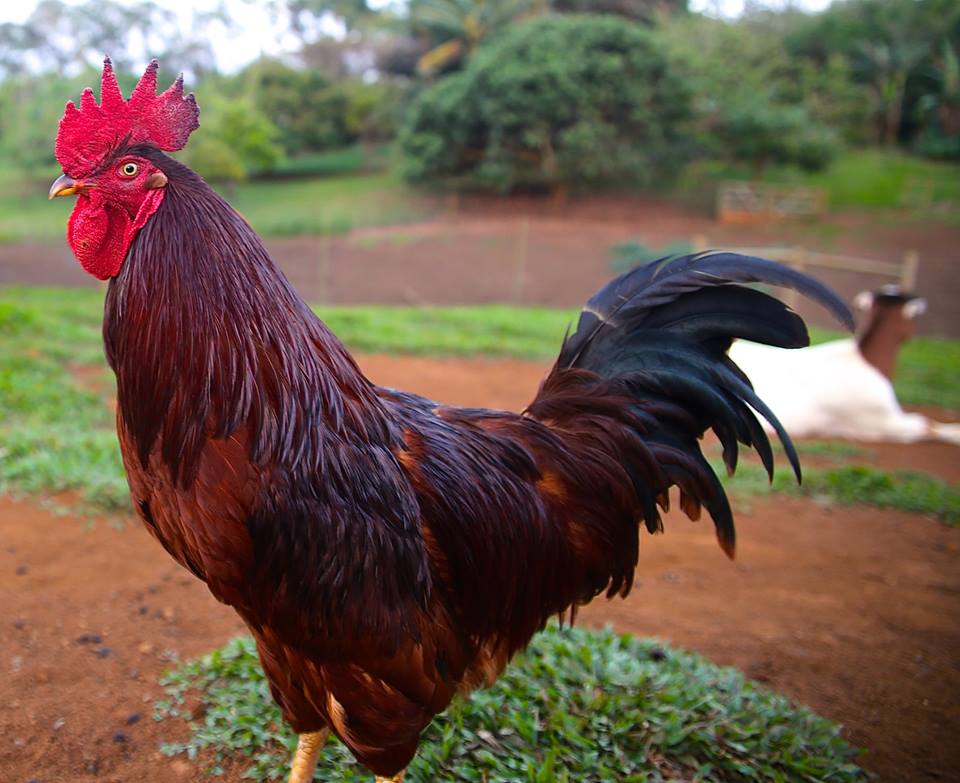 Another character visitors meet is Barney, A.K.A the sweetest pig on the farm. A former feral pig, Barney has come around to living the cushy life rather quickly. He is rumored to be a massive fan of belly rubs. (He even accepts belly rubs from Rufus!) 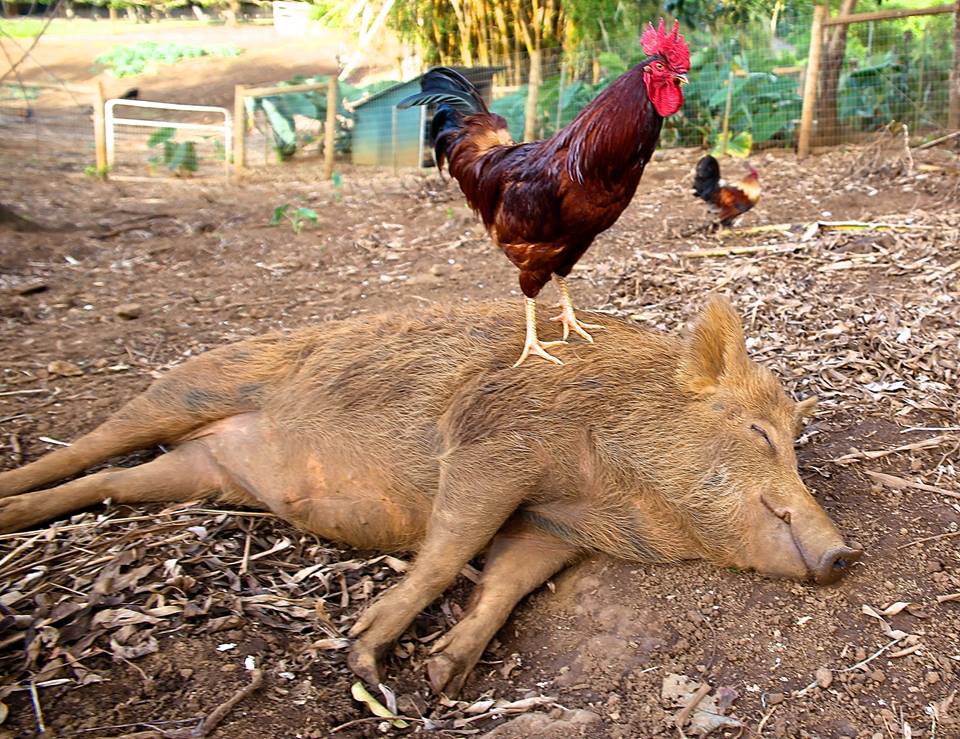 The sanctuary is also home to a number of rabbits, most of which were Easter presents for children who were discarded when the families realized the extent of this responsibility. 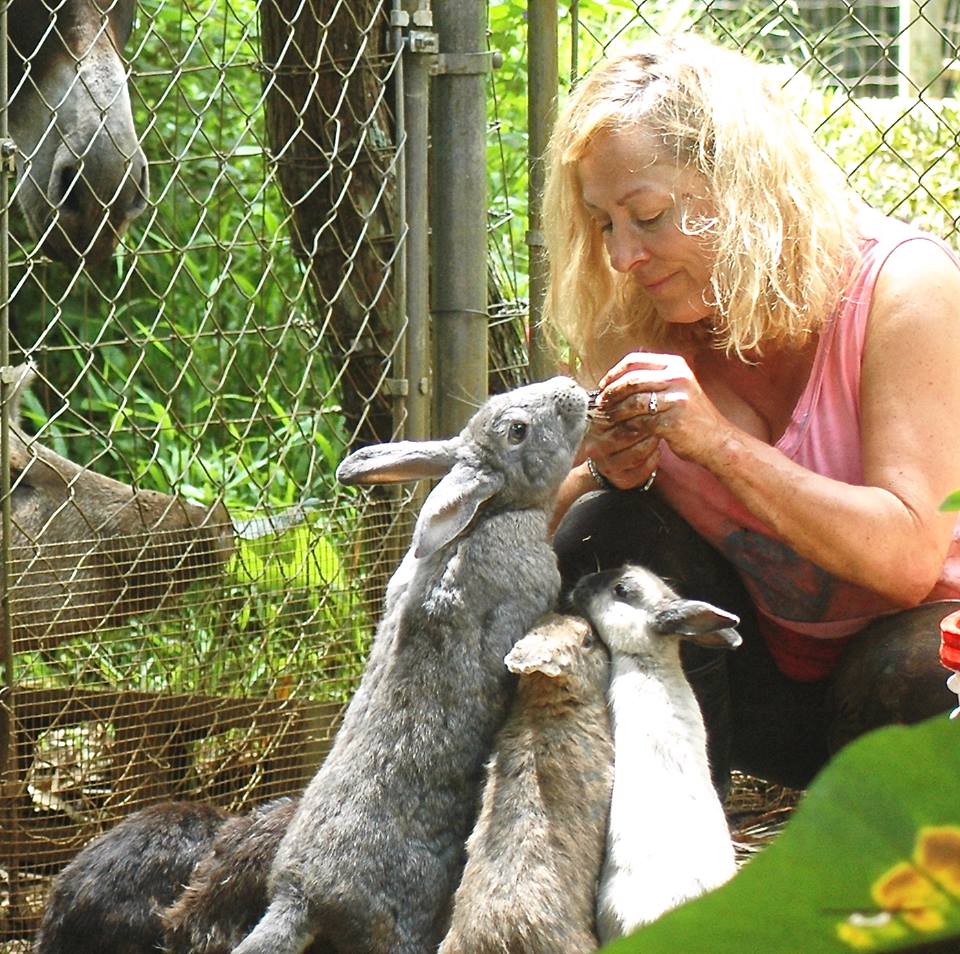 Most of the deer and goats who now live on the sanctuary came as orphans after their mothers were killed by hunters. These little ones require round-the-clock the care, but Laurelee is more than happy to step in as their foster mom, bottle feeding them until thy’re old enough to graze. Because they lost their mother at such a young age, they developed a strong bond with Laurelee. Even as fully grown adults, they’ll follow her around and sit on her lap for fuss and cuddling. 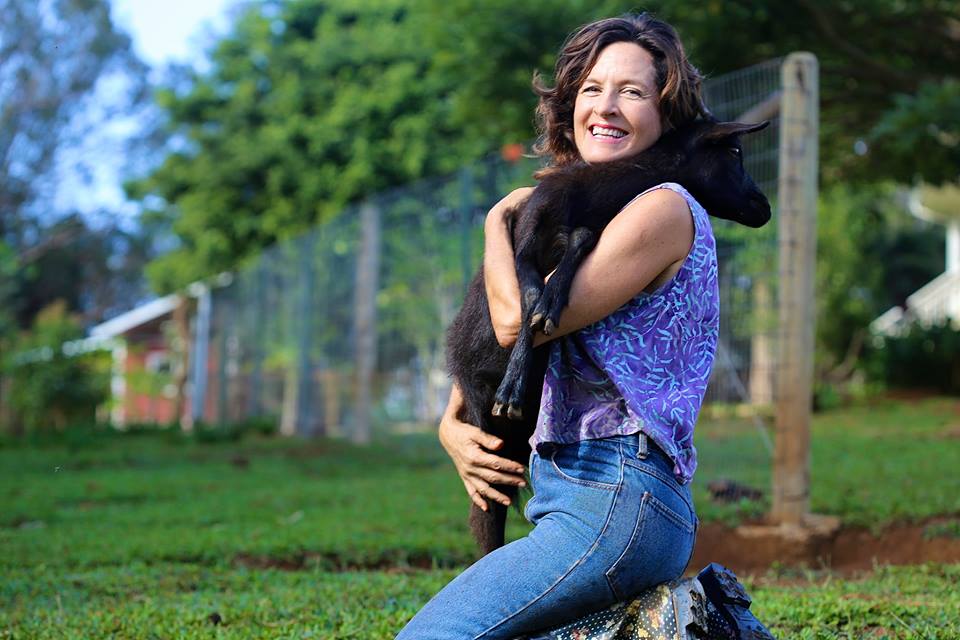 Laurelee and one of the sanctuary’s goat residents.

There is no questioning that Laurelee has completely changed these animal’s lives for the better, but helping and healing animals is not the only area that Leilani Farm Sanctuary focuses on. The sanctuary also offers programs for at-risk youth, people with special needs, and victims of domestic violence.

Compassion can be defined as having a deep feeling of sympathy for another being who is suffering. Most of the animals at the Leilani Farm Sanctuary were abused, orphaned, or neglected. So when children from troubled homes interact with these animals, they learn courage, forgiveness, trust, strength, empathy and kindness. The qualities that make up a compassionate human being.

“By learning empathy and respect for all life, children can break the cycle of violence and become protectors rather than abusers,” says Laurelee. “When we relay the animals’ stories to children with violent upbringings, it helps them relate to their own pain in a healthier way.”

During farm tours, Laurelee will share the stories of some of the animals rescued from abuse, abandonment, and slaughter. Children can listen to the stories of the pig who escaped from a slaughterhouse or the goat who was rescued from a barbecue, and as they learn these animals’ backgrounds, they can empathize and build a relationship with them. 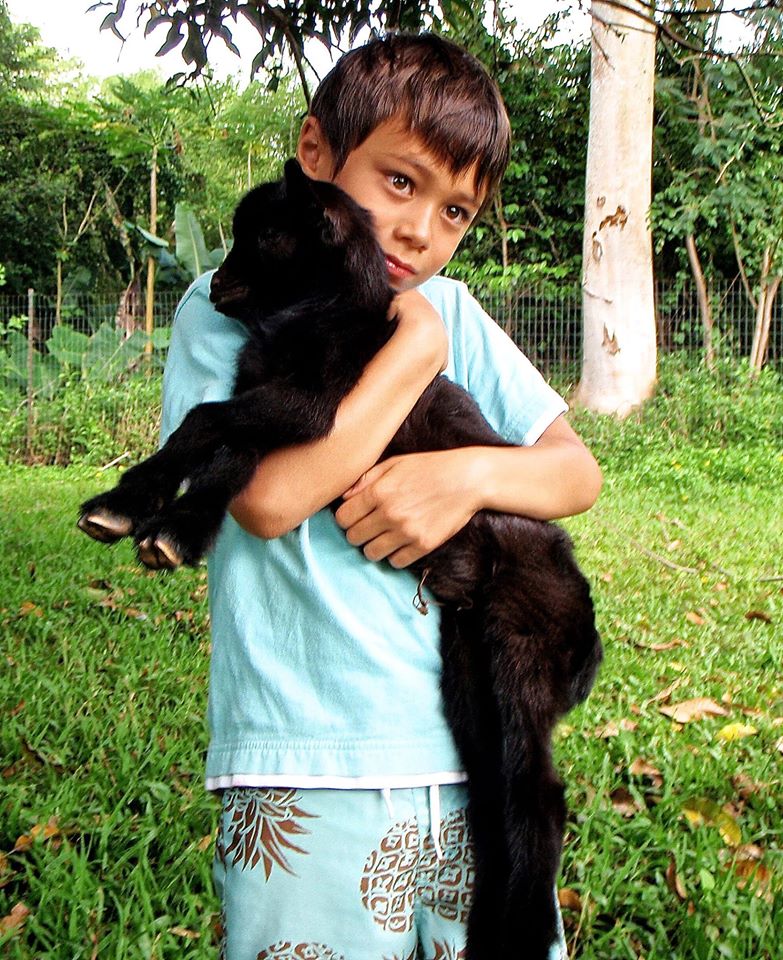 Little boy comforts Freddy the goat after learning that his mother was killed by a hunter.

“The animals become role models, helping children learn to forgive, overcome their pasts, and reach toward a hopeful future,” Laurelee says.“There have been many children who were in foster care, homeless, or from Maui Youth and Family Services who benefited from one-on-one interactions with chickens, cats, goats, and donkeys.”

Learning to be more compassionate towards both animals and themselves, these kids are ready to go back into the world and confront and struggles they may have with poise and a much greater sense of understanding. Not to mention, many who form a strong bond with animals decide to give up eating animals products as well.

“These poignant encounters often profoundly alter the way they view other living beings,” Laurelee tells One Green Planet, “The potential outcome is that kids may come to regard farm animals as individuals with personalities, rather than a meal.”

And the circle of compassion just keeps expanding from there.

Laurelee Blanchard shows us all that if you really care about an issue and put your mind and resources towards finding a solution, you can do anything. But, of course, this doesn’t necessary mean that you have to give up your career to help animals.

“There are so many ways to help animals every day, starting with being vegan,” says Laurelee. “People wanting to make a difference for animals, but aren’t able to leave their homes, can work on a myriad of ‘armchair activist’ activities such as emailing and calling companies and policymakers to affect change.”

And she’s right. You don’t even have to leave the door in order to make a difference for animals. Signing petitions, sharing them on Facebook and Twitter, making donations to animal charities, and making changes in your diet can all have an enormous positive impact.