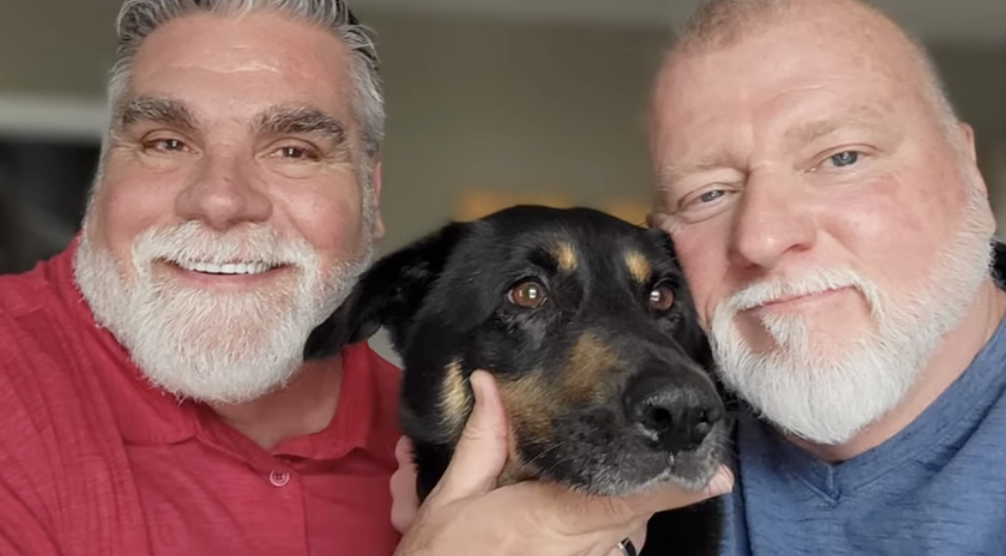 A North Carolina man wasn’t planning to adopt a dog last week, but after hearing Fezco’s story, Steve Nichols and his partner, John Winn, couldn’t resist. According to Nichols, their decision was almost an “immediate” one, and they felt deeply attached to the canine.

Nichols, 61, and Winn, 58, have been together for 33 years and first learned about a dog abandoned for showing so-called “gay” behavior, says a local news report. Four-year-old Fezco was abandoned at Stanly County Animal Protective Services after his previous owners decided something was wrong with him and wanted to get rid of the poor dog.

The dog had humped another male dog, and Fezco’s previous owners contacted the shelter and said that if they didn’t rescue the dog, they were going to kill him. Luckily, Stanly County Animal Shelter was able to find him a loving home quickly.

“We saw the story about the owner who turned the dog into the shelter because he thought he was gay,” Nichols told Good Morning America. “My partner and I started talking about it. The conversation went sort of like this, ‘You know, in 33 years, we’ve had to face the same ignorance, bigotry and stupidity from people and we weren’t always able to do something about it.’ But we thought, ‘We can do something about this.'”

“So we started out in an effort to just do something to help, donate some money or something like that. Over a period of two days, it sort of morphed into, ‘Well, he’s going to be a part of our family,’ and we just ended up adopting him.”

On Twitter, many people came together in support of Fezco and his story. They were outraged at the thought of abandoning a dog for this harmless and very common behavior.

One of the reasons why dogs may engage in such behavior is that they could have a high level of testosterone that is driving the dog to breed, veterinarian Tahl Rozycki told USA TODAY. “It could just be he’s trying to assert dominance over the other dog. The behavior also could be attributed to dogs always having a pecking order in a multi-dog environment and them knowing where their pecking order is, Rozycki said.

Same-sex behavior has been observed in about 1,500 species and is probably present in all social vertebrates. Research has found that interactions among animals of the same sex can help create bonds and produce hierarchies, which could aid in hunting.

Steve Nichols and his partner John live in Charlotte and have been together for more than 30 years. They adopted Fezco and renamed him Oscar, after the well-known gay writer Oscar Wilde, according to the couple.

“It’s just such a silly reason to turn in a dog,” Nichols told WCCB Charlotte. “We just thought it would make sense for the gay dog to be adopted by a loving gay family,” they told USA Today.

No dog deserves to be deserted for something they instinctually do as canines, and it’s amazing that Oscar found his forever home and is being accepted and loved as he should!