Smiling Pup Who Faces Eviction Due to Wrongful Breed Legislation Needs Your Help!

When it comes to adding a four-legged member to the family, everyone knows that the right thing to do is to adopt not shop. There are so many wonderful dogs waiting alone in shelters that anyone can find the perfect pet to join their family without supporting breeders and puppy mills.

So when Dan Tillery saw a picture of  an American bulldog named Diggy, formerly Sir Wiggleton, on the Detroit Dog Rescue Facebook page he knew that he found his newest addition. He went with his girlfriend to meet Diggy, went through the paperwork, and brought Diggy to his new forever home.

In the days that followed, Dan, a musician, did what any proud new parent would do, he took pictures of his incredibly photogenic new dog. And one particular photo of both Dan and Diggy quickly went viral for its insane cuteness. 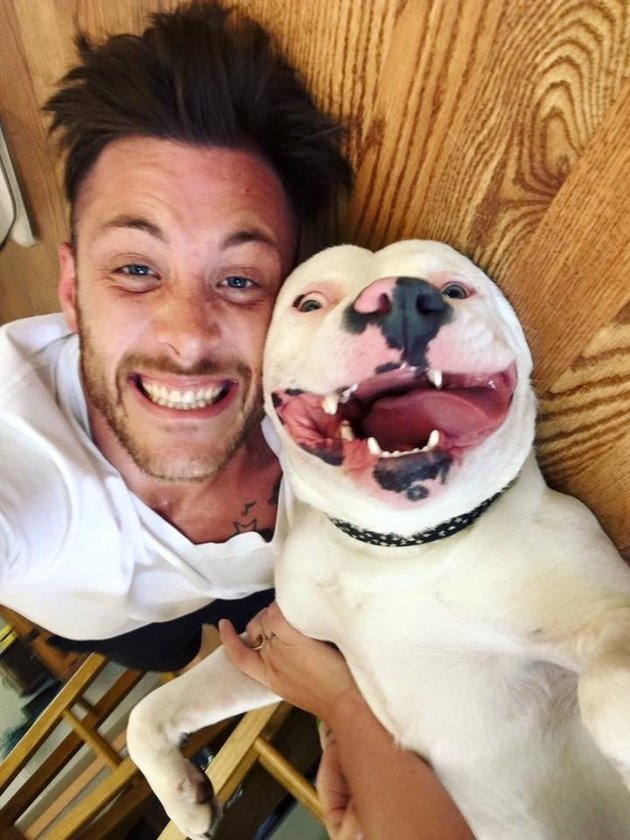 There’s something about Diggy that makes that dog look like he has the biggest grin on his face and that made everyone fall in love. One only has to look at the photo and you can’t help but feel like both of them are finally in the right place.

Unfortunately, there were some other people who saw the photo and complained to the Waterford Township police that Diggy looked like a Pit Bull, a type of dog that has been widely misunderstood and punished because they are frequently used in dog fights. Many people don’t understand that these dogs are starved and abused until they have no choice but to fight. And in Waterford Township, Michigan where Dan and Diggy live, there has been a 20-year ordinance against owning Pit Bulls or any breed that is mixed with a Pit Bull.

Can you imagine, bringing a precious life home, a dog that had been found on the streets by animal control, rescued by another group and then finally taken in by a family – only to have him taken away because of how he looks? 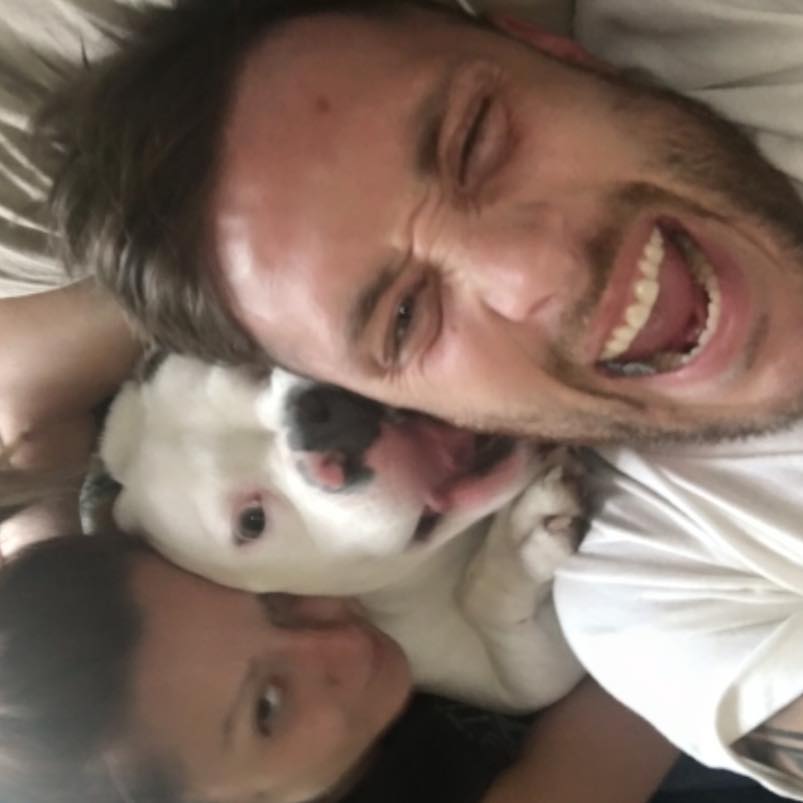 Not only was Diggy’s new family devastated but when word got out on social media people all over the country petitioned to let Diggy stay. Dan was issued a citation for keeping the dog despite providing multiple sources of documentation that Diggy is an American Bull Dog, not only from the rescue center but also from the City of Detroit Animal Control and a local vet. He now awaits a court date on August 11th to find out if Diggy can stay.

The story is not only heart-wrenching for Dan and Diggy, it points to a bigger issue of selectively targeting certain breeds through legislation that not only keeps dogs that would otherwise be rescued from shelters from ever finding homes, but also forces people who have these dogs to leave them behind if this law is put in place.

The fact is, breed specific legislation (BSL) has been proven time and time again to be completely ineffective at achieving its actual goal of limiting dog bites and attacks. There is zero evidence that supports banning certain types of dogs actually lowers incidents of dog bites in the U.S. – zero. Further, the choice to target Pit Bull is incredibly arbitrary. According to temperament tests, pit bulls score extremely high, the American Pit Bull Terrier achieved a passing rate of 86.8 percent (better than collies, golden retrievers, and beagles), which means they rank fourth highest of the 122 breeds tested. And yet, because of their association with dogfighting rings, they are discriminated against as “aggressive” dogs. Tragically, it seems that the only thing that BSL achieves is the destruction of any dog that resembles a Pit Bull. Because of BSL (and widespread misinformation), Pit Bulls have an extremely low chance of survival in animal shelters. In many regions, they’re killed immediately upon shelter admission, with no opportunity to find a new home and their overall euthanasia rate hovers around a staggering 93 percent.

It is up to us to put an end to this senseless legislation that has not only caused Diggy’s dilemma but the loss of life for so many other dogs that resemble Pit Bulls. We hope that this story will serve as a reminder to people that there are so many animals out there who deserve a good home and should not be punished for what breed they are, what breed they look like or because of social stigma around them. Diggy spent 100 days in the shelter before he found a place to call home.

You can sign this petition and lend your voice to help him stay with his family!